"At the Heart of Gold": USA gymnastics abuse survivors on the long road to healing 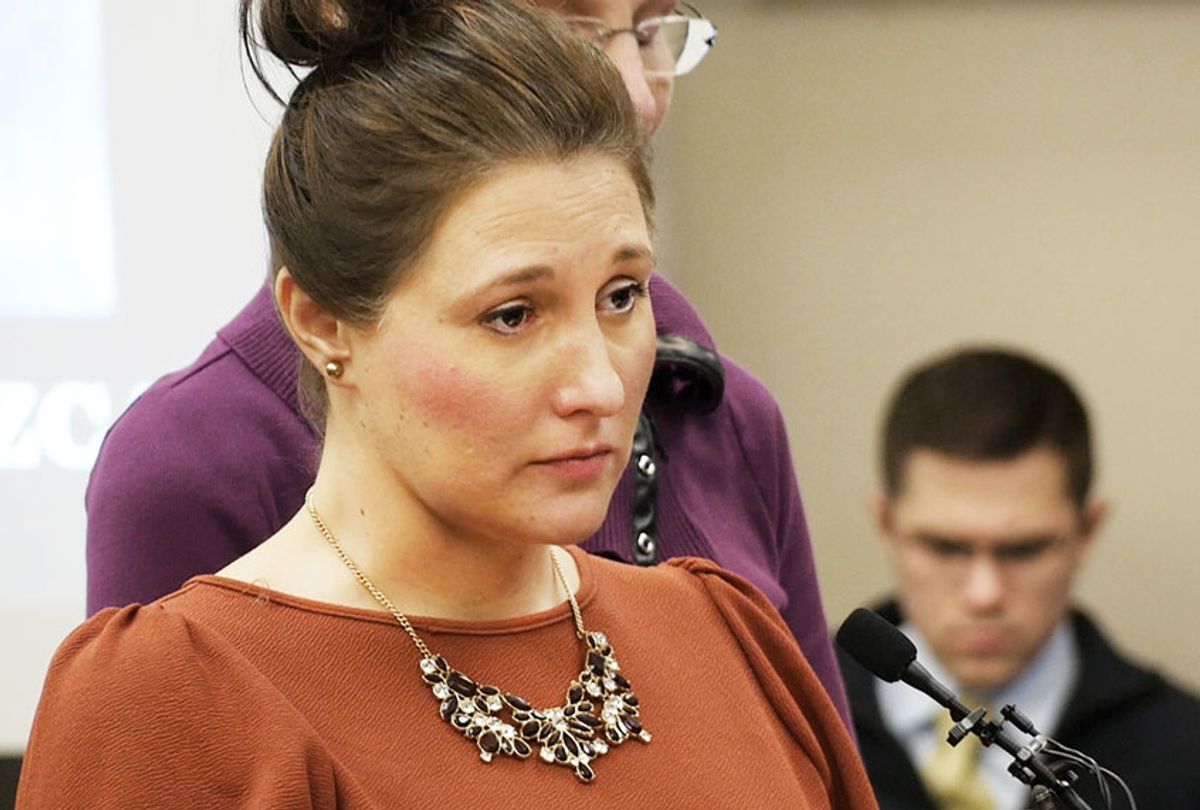 Trinea Gonczar in "At the Heart of Gold: Inside the USA Gymnastics Scandal" (HBO)
--

The USA Gymnastics scandal exposed Larry Nassar as a sexual predator who abused hundreds of trusting young girls. His “medical treatments” involved inappropriate touching and genital penetration. He physically and psychologically harmed more than 300 survivors who have come forward once the story made headlines.

Erin Lee Carr’s shattering, incendiary documentary, “At the Heart of Gold,” premiering at the Tribeca Film Festival April 25 and screening on HBO May 3, dives deep into this horrific scandal. Carr’s film explains the culture of gymnastics, and how these young athletes learn to absorb pain to realize their dream. She brings viewers into the mindset of these “tiny, strong, fearless” young girls who participate in a mentally difficult and physically demanding sport and how they learn not to cry or yell when in pain. They also do not necessarily question why Nassar’s treatment for an ankle injury involves their genitals. It is disturbing when one survivor explains that she felt better after the treatment, and therefore concluded that his technique must be working. When other survivors echoed this, or worse — and claim they “sucked it up” after being intimidated for reporting Nassar’s abuse — it is devastating.

Carr shows how the gymnastics environment enabled Nassar to be a “master manipulator.” He had access to, befriended, and fooled the young, female athletes (and by extension, their families) into trusting him. “At the Heart of Gold” explores how the network of powerful adults, coaches, and trainers, as well as Michigan State University officials and the USA Gymnastic president and other members of the organization, covered up the abuses for weeks, months, and years, protecting Nassar once violated teens started to come forward.

The impact Nassar had on these survivors and their families, as well as the ramifications the scandal had on the gymnastic world plays out in the courtroom as numerous women present their impact statements to show the damage Nassar caused.

“At the Heart of Gold” is a painful, sobering, and ultimately inspiring film. Salon spoke with Carr about her powerful documentary.

I am curious if you ever participated in gymnastics or an organized sport outside of say, gym class in school. Do you recall the relationship you would have had with your coach? How did you reflect on that in making this film?

I went to an all-girls Catholic school and I participated in tennis on a not deeply competitive level. But my executive producer, Sarah Gibson, participated in competitive gymnastics and had more of a background on that. I was focused on the legal aspect of it.

You have made several documentaries detailing cases of abuse. What made you decide to tell this particular story, and why now?

I think that documentaries are a really important place to have further discussions about abuses, like “Leaving Neverland,” and the pantheon of HBO films. I was looking at the relationship between coaches and gymnasts and then the Nassar court case happened. To have the camera in the courtroom as the women were confronting their abuser in real time — it was a global reckoning of abuse culture. It had to be a film. I have a deep respect for all who wrote about it but seeing the [women speaking in the courtroom] I knew it was also a film.

It is particularly disturbing to hear survivors say, “How can I ask about this?” as well as hearing the testimonies of young women like Isabell Hutchins and Amanda Thomashow, who feel they were being “gaslighted,” or Larissa Boyce feeling intimidated for reporting her abuse. It must have been painful to listen to so many women recount their horrific experiences. Can you talk about the impact of this?

I tried to put my mind into what it was like to be a young girl interacting with Larry. Why didn’t they speak up? But to talk about sex, or inappropriate touching, or abuse, and dispelling those myths —knowing these women and seeing them now, like Amanda who is smart but when she was a kid, she was looking for support and guidance and to have someone heal her intense injuries. It created a perfect storm and Nassar could decipher these women and they wanted him to heal them. Gymnastics is a sport where a lot of agency and power is given to the adults in the room and this story is about the girls taking it back.

Likewise, Trinea Gonczar is shown saying Nassar was “awesome,” (she later spoke out against him). In one of the film’s most powerful scenes, Gonczar expresses tremendous guilt for feeling she “silenced victim’s voices.” There is shame felt by the survivors and the abuser. Can you talk about that and how some folks felt sympathy for Nassar?

When I met Trinea, she was at an early stage of her processing what had happened. There were vestiges of her love and caring for Larry and when she said, “He was awesome,” it was shocking but really important. It’s easy to see him as a creep, but he did not look like a predator to the girls who interacted with him. He was kind, talkative, and brought gifts. We envision a predator as a guy in a trenchcoat in alleys. What does it mean for him to be a guy who is nice to you? Predators look different and don’t come in a package that we assign to them. There were a multitude of the ways he got away with this. He didn’t look the part. It is devastating when Trinea says, “We loved you because we thought you loved us back.”

I admire how the first half of the film provides the backstory and context, how these young female athletes are instructed not to show weakness when they are hurt, while the second half has the scandal break, and the courtroom scenes recount the survivors giving their impact statements. Can you talk about your approach to telling this story?

It’s so easy to say it’s all as I imagined it! I worked with a creative editor, Cindy Lee, who understood the story. How could we reveal new things and have an emotional energy attached to the piece? We originally had the courtroom scenes intercut because we knew we were going there, but I changed it to have the courtroom in the end third, so we see how we got there. It is a courtroom drama, and it’s so profound and real to life. We weren’t able to talk with Kyle [Stephens] so do we include her testimony or not? We can’t not include that, and the loss of her father. The ripple effect and devastation that follows you and your family, your partner, your career and your mental health cannot be overstated. These [survivors] are not [just] battling that time and moment, they are, every day, learning how to trust people again.

You show the conditions that allow Nassar to become a “master manipulator” but your focus is more on the impact of his actions, profiling him through his actions and words. Can you discuss that strategy?

I did not want to re-victimize people. There does not need to be a film from the Nassar point of view. I have focused on perpetrators in other films, but it felt like the wrong approach for a film like this. I did challenge it. You see him in the room, and hear his voice, and he looms like an uncertain villain, but I never wanted to hand the movie over to Nassar. He wanted to put himself front and center and people are uncomfortable in his presence. It was a careful edit to focus on the women who stood up to him. It’s this incredible moment. Judge Rosemarie Aquilina let everyone, not just the survivors, talk, but Nassar as well.

I was particularly outraged to hear that a Title IX investigation resulted in Nassar ignoring the instructions he was expected to follow. The culpability, your film deftly shows, lies not only with Nassar, but all those who enabled him or turned a blind eye to his actions. At every organization, there was an opportunity to stop this. But it continued, with the support of John Geddert and Kathie Klakes to Deans at MSU, the USOC, and the USAG. Why do you think he was allowed to get away with this for so long, and with the cooperation of so many? Is this simply a matter of following the money?

I think Larry was enabled in part because of his connections to the Olympics. MSU saw him as a recruiting aspect: We have the Olympic team doctor. There were 17 incidences of failure to report. We have documentation of MSU as a school. It was the connection and that people protect adults. As Marci Hamilton says, we don’t want to ruin an adult’s life based on the [accusations] of a child.

Nassar was smart — he is so comfortable in an interrogation room with a female police officer making jokes about “doing this since 30 pounds ago.” He either believes the lies or is the best liar I’ve ever seen. There are so many different layers and reasons. It’s not one man. Even USAG heard this from Aly Raisman; they had an internal review. They did not go straight to the cops. Institutions cannot police themselves when it comes to abuse. They have far too much money and reputation, so it needs to be [investigated] from an outside source.

The film calls out for social and legal change. There certainly has been an uptick in the #MeToo movement, and more transparency and visibility. Do you think your film will change minds, rather than just preach to the converted?

I really think that if parents and people who work in the educational sphere see this film, it can help them communicate with others about abuse and take the shame—“What did you do to deserve this?”—away; an understanding, from a survivor’s mindset, that nobody wanted this.

People are mad at Nassar, MSU, and USAG, and mad at the parents who were in the room and let this happen. It’s a weird shifting of blame. It’s no one’s fault. Perpetrators will do this, and we need to provide accountability on an institutional level.