From soil microbes to factory farming, the Green New Deal could radically improve our food system 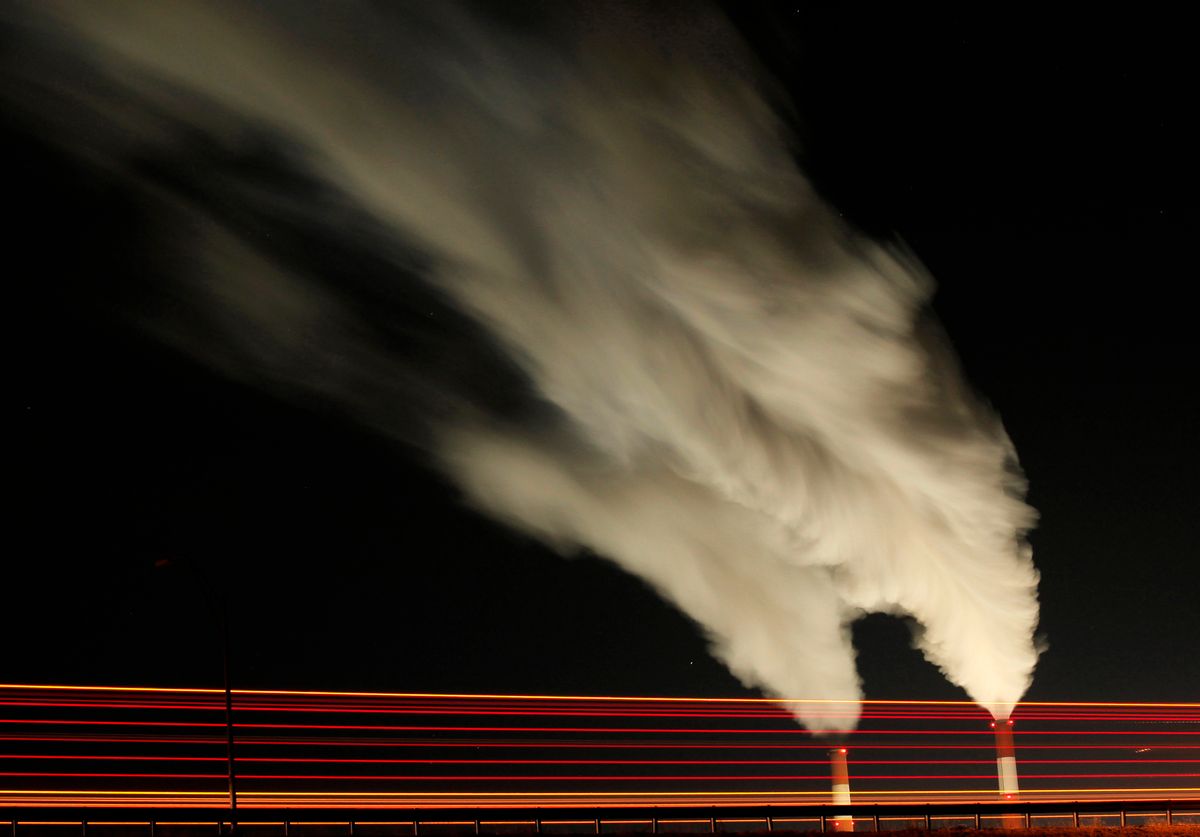 FILE - In this Jan. 19, 2012 file photo, smoke rises in this time exposure image from the stacks of the La Cygne Generating Station coal-fired power plant in La Cygne, Kan. The Environmental Protection Agency on Tuesday, April 18, 2017, asked a federal appeals court in Washington to postpone consideration of 2012 rules requiring energy companies to cut emissions of toxic chemicals. The agency said in a court filing it wants to review the restrictions, which were set to kick in next month. (AP Photo/Charlie Riedel, File) (AP)
--

For any group activity to be successful — whether it’s a school field-trip or a country’s entire economy — people must be well fed. Our health and well-being depend on quality food, which is why food security is so closely linked to success and prosperity, on both a local and national scale. But as world populations grow, agriculture has become heavily industrialized. This has led to amazing food availability, but has also hurt the environment — impacting not only local water and land resources, but also contributing to the global climate crisis.

There is a real sense of urgency among those who want to protect the planet while also keeping everyone fed. That’s why, with as little as 12 years left to prevent catastrophic climate change, Democratic members of the US House and Senate have recently proposed a Green New Deal. The proposed legislation aims to overhaul the American economy, with decarbonization as the primary goal. Through laws and financial incentives, the plan proposes to transition the US to a functional economy that emits zero greenhouse gases. It will address industry, transportation, and also agriculture — a field deeply intertwined with both healthcare and employment.

The Green New Deal has gained widespread public support and, unlike previous attempts at climate change legislation, it takes a holistic view of industry in society, including the need for good jobs. But agriculture alone will be a tough industry to tackle.

In conversations about agricultural emissions, the elephant in the room is a cow. Emissions from cattle farms make up around 40 percent of agricultural methane pollution. A recent study suggests that to forestall climate catastrophe, global production and consumption of red meat will need to be cut by about 50 percent. The Canadian government recently released a Food Guide that encourages people to eat less meat, and it’s true that a big swing in consumer preferences would indirectly cause changes in how we farm. But the Green New Deal could target farmers directly with initiatives intended to change agricultural practices, shifting from raising meat to growing crops.

That said, even crop-growing farms have many and varied sources of greenhouse gas emissions. Microbial respiration in soil naturally produces CO2 and nitrous gases — but when plants grow, they take up carbon dioxide from the air and nitrogen from the soil, balancing the cycle. When farmers convert land from forest to farm, biodiversity among animals, plants, and microbes is lost, and this normal processes of biomass recycling get interrupted. When ground is left bare between crops, or turned over during tilling, soil erodes. This limits the land’s ability to hold water, and releases further greenhouse gases. But there are alternative land management practices, like no-till farming, that may help reduce these kinds of emissions. (Although there is still some controversy regarding the effect of no-till on carbon emissions, there is at least strong evidence that it’s good for soil and therefore good for farmers).

Although still short on policy details, advocates of the Green New Deal suggest that it should focus on the use of ‘green’ approaches in agriculture. As others have noted, this should include abolishing the factory farming of animals and encouraging investment in more efficient infrastructure that improves land and water footprints. For example, financial incentives could help encourage a mixed crop-livestock model, where a single farm both rears animals and grows crops. Manure from the animals can be used to fertilize the fields, and plant waste from the harvest can be used for animal bedding and bioenergy generation. If the animals are also given feed produced on-site, there’s a built-in cycling of biological material (and the carbon it contains), and very little need to import organic or synthetic fertilizers onto the farm. This idea of “circular agriculture” eventually improves the quality of the manure the animals produce, and therefore the soil fertility as well. Legislation in the Green New Deal could help promote this kind of farming by establishing legal limits on chemical fertilizer, either by acre of farmland, or by the amount of crops produced.

But if the goal is true agricultural sustainability, we have to look beyond carbon emissions — animal welfare, food safety, and public health matter too. The preliminary text of the Green New Deal proposal focuses heavily on decarbonization, but this is closely tied with other environmental problems. The good news is that by addressing agriculture’s carbon emissions, we’ll be fixing a plethora of other environmental concerns too. Take, for example, the widespread use of antibiotics, which has caused the development of dangerous resistance in the environment. Antibiotics are used to ramp up animal growth and protect against disease, to prevent financial loss to the farm. A diversified and circular agricultural business model — where each farm produces more than one type of food product and carbon emissions are low — could mean that producing less meat is still economically viable.

Circular agriculture would also help with the overuse of chemical fertilizers and pesticides. Modern agriculture tends to grow massive fields of only one crop, allowing diseases to spread rapidly — which in turn requires chemical pesticides. These chemicals kill the beneficial microbes and insects in the soil, drastically reducing soil fertility, and ironically promoting the spread of disease, as pests and pathogens develop resistance to the sprays. The infertile soil then requires heavy doses of fertilizer. This often leads to runoff of excess nutrients into local waterways, and an explosive growth of algae and other water plants, reducing the oxygen supply to the water, and killing fish. In contrast, circular agriculture calls for growing different crops together, prolonging soil fertility and reducing disease.

Luckily, science has new solutions to offer too. For almost every environmental problem associated with modern industrial agriculture, there is a strong body of research supporting environmentally benign alternatives. For example, instead of chemical sprays, using biological control agents — like Bacillus and other bacteria, or even some non-pathogenic fungi — can reduce pathogen resistance and also improve soil fertility.

The idea behind “biocontrol” is to exploit the natural tendencies of certain microorganisms to antagonize other species that may be pests or pathogens of plants. I am performing research at the Royal Institute of Technology in Stockholm, Sweden, using microbiology and biochemistry to try to understand how bacteria in the soil can keep plants healthy. The goal is to develop new ways to encourage soil microbes to protect their neighbors. For example, by introducing a new bacterial or fungal species to soil, or by adding  natural compound such as chitin — the complex carbohydrate found in insect exoskeletons and fungal cell walls — we can promote so-called “soil suppresiveness,” which is the ability of the soil and all its microscopic inhabitants to naturally suppress disease in plants.

The biocontrol industry is currently dominated by small-medium sized enterprises (SMEs), businesses that have somewhere between 20 and 350 employees. Few larger companies are investing in biocontrol because, currently, there’s not a big market for it. Industry experts believe this is specifically because there has never been any governmental support for biocontrol. The Green New Deal could normalize the use of biological control agents by classifying and regulating them, making them part of the farmer’s standard toolbox. This would open up commercial opportunities, enticing larger and better resourced companies to get involved in research and development.

The Green New Deal could also provide subsidies for basic research on biocontrol or even pest-resistant genetically-modified crops. Patents for some forms of genetically-modified plant technology have recently expired, allowing researchers to experiment on new varieties of plants that wouldn’t need to be sprayed with chemicals to avoid disease.

Of course, it’s not like industrial agriculture set out to damage the environment on purpose. Many of the most unsustainable farming practices result from the tiny profit margins of growing food, which force farmers to maximize immediate yields at the long-term expense of the environment. Unfortunately, so far many of these ‘green’ alternatives still come at a high price. This puts them out of the reach of small farm budgets, and means that larger farms have no incentive to make the switch.

Although detractors of the Green New Deal suggest that governmental subsidies and regulations might not be enough for the scale of changes needed, there are recent examples of policies successfully shifting behavior. Government subsidies for corn ethanol, for example, led to a massive uptick in production several years ago, suggesting that a well-financed push can be effective in changing agriculture.

Certainly no one’s suggesting it will be simple. The aforementioned ecological problems all have economic drivers, and it won’t be easy to craft fair policies that apply to smallholder farms, local organic outfits, and industrial-scale animal farms. Financial penalties for environmental crimes might only further push smallholder farmers out of business, while failing to rein in large industrial polluters. When working out the specifics of the Green New Deal legislation, policymakers will need to work closely with organisations that represent farmers and their local communities.

But if the Green New Deal takes an appropriately broad approach, it has the potential to massively improve environmental sustainability and social equity in farming. Food security in urban areas, and improved public health through better eating habits, are within reach. New scientific developments could help both farmers and the environment — we just need a little help with the transition. But scientifically at least, it’s possible to reduce emissions, pesticides, antibiotics, and disease all at the same time — we just have to remember that a farm is a complex ecosystems, not a simple food factory.