As we struggle for the false starts of Spring, what better than a recipe for leek with pasta? 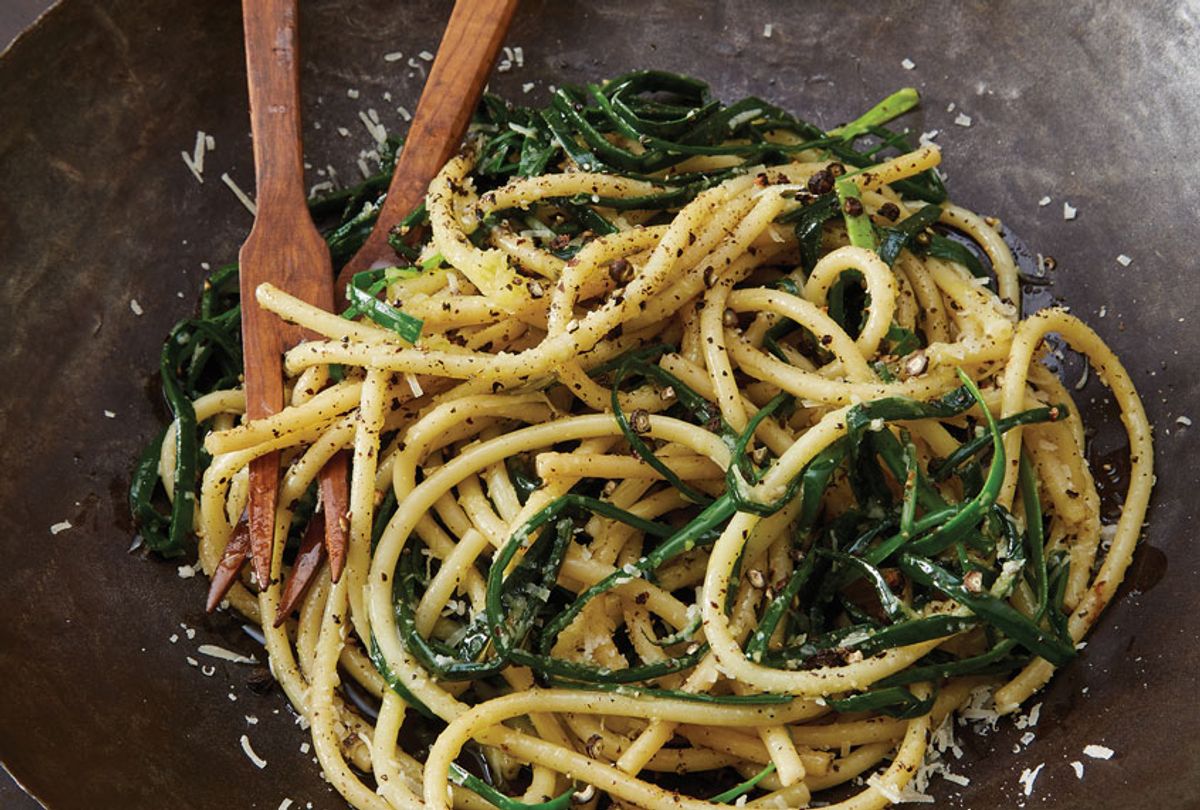 My first experience with cacio e pepe was a mistake. I saw it on a menu, thought, Pasta, cheese, pepper? Sold. I ordered by pointing at it, too afraid of garbling the pronunciation and revealing my inexperience, but I shouldn’t have worried. They didn’t know what they were doing either. What arrived on my plate was a gummy, gooey mess with nary a speck of pepper to be seen. I took a couple bites, then moved the rest of it around with a fork, like I’d regressed to childhood and was trying to convince my parents that I was eating. Then I gave up on the dish.

The true error was not in my (persistent, misguided) fear of making a verbal gaffe, nor in the restaurant’s bungling of the dish (maybe it was a bad night?), but in my decision to write off cacio e pepe as a result. Until, that is, I had a good—no, stellar—version of it at Maialino, in New York City, where I realized what I’d been missing out on. I’ve continued to order it at restaurants, but I’ve also learned that it’s an easy dish that can and should be made at home. Plus, thanks to Food52er Sara G., I’ve picked up on the idea of adding a little dose of green to the dish. She adds radish or baby turnip greens to hers, but I like adding thinly cut lengths of leek tops to mine.
Serves 2 or 3

1. Fill a large pot with salted water (use 2 or 3 three-finger pinches of salt—it should taste like the sea) and bring it to a boil over medium-high heat.

2. Meanwhile, stack a couple of leek lengths on top of one another and make narrow cuts down the length of them, like you’re turning them into linguini. Once you get the hang of this, you can make your stack a little higher. Don’t stress out about it too much; they won’t all look perfect—it’s fine.

3. When the water is boiling, add the pasta and give it a stir. Take note of the instructions on the package; you’ll be subtracting 2 minutes from the cooking time. One minute before the pasta is done (so 3 minutes before the time on the package), add the shredded leek tops.

4. Drain the pasta and leek tops, reserving 1 cup of the cooking water.

5. Return the empty pot to the same burner and turn the heat to medium. Add the olive oil and pepper to the pot; let it sit until it smells fragrant, 30 seconds to 1 minute.

7. You should now have a silky sauce coating all of the pasta and leek tops (the tops might require a little more tong action to distribute them evenly). If not, add a little more pasta water and toss everything again, then serve and eat immediately.