This spring onion festival is the best way to experience Barcelona

It’s worth the plane ticket alone 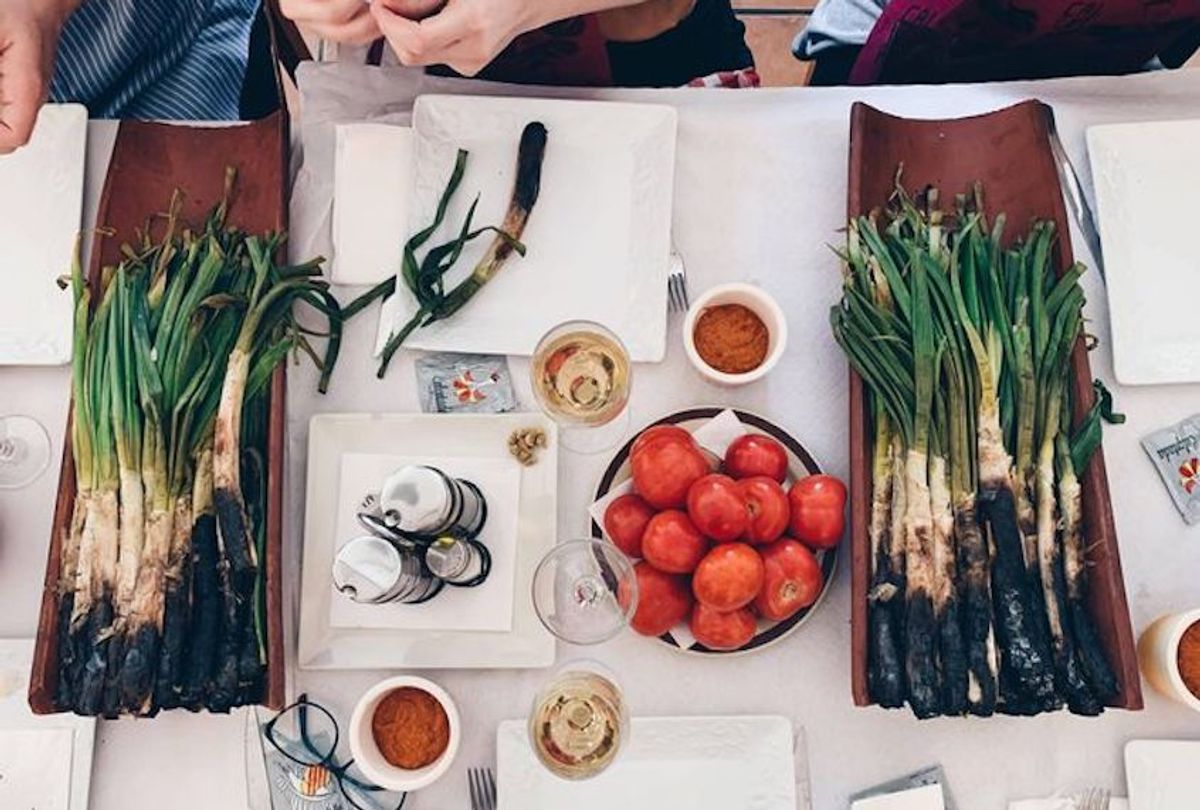 When you’re new to a place, everything, devoid of context (or at least cemented squarely in a different one) seems to deserve admiration. A sandwich counter or a commuter in a huff is suddenly cause for wonder. That’s one of the reasons we visit places we haven’t been before, no? To marvel at the workings of everyday life in the nooks and crannies where we don’t live our every day.

When I first arrived to Barcelona a month ago, my eyes moved around like the pick on a ouija board. They were propelled, however, not by some phantasmagoric force, but rather by the plazas teeming with Wednesday-night crowds washing down tiny octopus with beer; the dank stone buildings that jutted up against each other like strangers in an elevator; construction workers clinking terra-cotta bricks. The familiar — dinner, walls, raw materials — become instantly beautiful in the vacuum of travel.

And then there are, of course, moments that jackhammer through your jetlag and shake you to the reality that you are very much in a new place. For me, that was the sight of hundreds of Spaniards gathered in a park, slurping what looked like long green razor clams dipped in what I could only contextualize as a Thousand Island dressing. From a raised platform blasted music that sounded like Madonna’s album, "Ray of Light," as filtered through the motherboard of a Central European hard-style DJ. And in the middle of it all, behind a chicken wire fence was the main attraction: 8, 10, 12-foot rows of plump spring onions getting absolutely slammed by a roaring fire.

I was at my first calçotada.

Like many things about Barcelona — the language, the people, the politics — a calçotada is distinctly Catalonian, local to the southeastern coastal region in which the city sits. It is, at its simplest, a late-winter barbecue where people grill intense amounts of calçots (a larger variety of green onion). Calçots are grown in the region surrounding the city and resemble scallions in shape and texture, but are more similar in size to a small leek. Farmers plant them in trenches, like they would an onion, and harvest them in late winter when their sturdy green stalks sprout from the dirt.

In February and March, as the days grow longer and the city’s mild winter starts to fade, groups of families and friends gather around grills, usually on a Sunday afternoon, and pluck charred calçots from fingers of fire. Next, they peel off the blackened outer layer and, like greedy children running a French fry through ketchup, drag the now soft, plump onion through a smoky-sweet sauce, a tangy blend of roasted tomatoes, fried bread, toasted almonds and hazelnuts, paprika, and garlic. It’s sweet and creamy and gives the tender flesh of the calçot a nutty power boost.

“The calçotada is an excuse to get together with friends and families and turn our backs on winter and welcome spring,” says Jan Vidal, a native Catalonian. He estimates that he attends five to six calçotadas a year. “Calçots themselves are just a close relative of an onion, but the real protagonist in the shadows is the calçot sauce (which is never to be confused with romesco). What it all really means for me is the chance to enjoy being outside again after the winter months—as well as an excuse to drink vermouth, beer, wine, and ratafia (a Catalonian fortified wine) with people that I enjoy.”

Like the chocolate chip cookie, a calçotada was born from an accident. It’s believed that in the 19th century, a farmer in Valls (a rural Catalonian town outside of Taragona) left his calçots to cook a bit longer than normal. Upon peeling back the charred outer layer, he found the onion’s flesh to be tender and good. He dipped it in a sauce improvised with ingredients on hand. Thus, the first calçotada was born.

What began as a rural tradition has now extended across the province and into the cities. Restaurants in the city center offer calçots to customers, urban public spaces host calçotadas each weekend. Yet, most still contend that the best calçotadas occur outside the rhythm of the city.

So, on one especially bright Saturday morning, I set out with my roommates and friends to the hills outside of Barcelona. It was the warmest day since my arrival, and I was in search of these giant spring onions.

We landed at Can Pichurri, a country-style barbecue restaurant 30 minutes outside the city by train. By the time we arrived in the early afternoon, the spot was full of people slinging green onions. Soon our table of 12 was full of terra-cotta roofing tiles piled with blackened calçots. We each had our own small receptacle for sauce. We poured house red wine from ceramic pitchers.

The technique to eating calçots, my tablemate explained, is simple: With one fluid movement, you pull off the charred exterior layer to reveal the buttery inside flesh by holding the central stalks of the calçot in one hand and lightly tugging at the outer ones with the other. Like a ripe banana peel or a ring on a soaped-up finger, the blackened layer should slip right off. The exposed calçot takes a dip in its eponymous sauce, which is sweet and slightly gritty from the ground nuts. Like children eating spaghetti, we tilted back our heads and opened our mouths to drop in calçot after calçot until we could see the dusty red bottom of the terra-cotta vessel.

Another tablemate explained to me that calçots were a product of poverty as farmers used to replant their onions in late winter in hopes of reaping a second harvest. What with all the abundance, they tossed a bunch over heat and ate them as they were. Someone else reminisced on the calçotadas of their childhood and recalled how their dad used to render the alliums a deep burnt black before sharing them with others. The person on my right was eating sauce straight out of a ramekin with a fork.

I had moved to Barcelona with little knowledge of the city, and certainly my place in it. I knew that it was a city on the coast, and a bit about Manchego from my stint as a cheesemonger, but besides that, much about Barcelona eluded me. Even upon arriving, I found it colder than I expected—both in temperature and in temperament. The Mediterranean city trades stereotypical Spanish flair for something a bit more cerrado, more closed, more Catalan. Finding work, finding friends was a slow process, albeit one that was taking longer than I expected. Leaving home, leaving comfort, and entering into the unknown is universally touted as a scary but ultimately rewarding enterprise. Sometimes, I feel like I’m still awaiting said results. But today, I put aside those anxieties in the name of my favorite form of self-care: eating.

Across the dining room, a table of Catalonians stood singing and clapping, animated by the advent of spring — or perhaps several bottles of house-made cava. My stomach was stretched tight, full of the fibrous green allium. I turned my eyes back to the table and peeled yet another calçot. There was, of course, some metaphor here what with spring, new beginnings, my arrival in an unknown city, and these charred calçots drooling a bright, piquant orange. But I was too busy eating to find it.