704 cases of the measles have been reported in the US this year. In 2000, the disease was supposedly eliminated 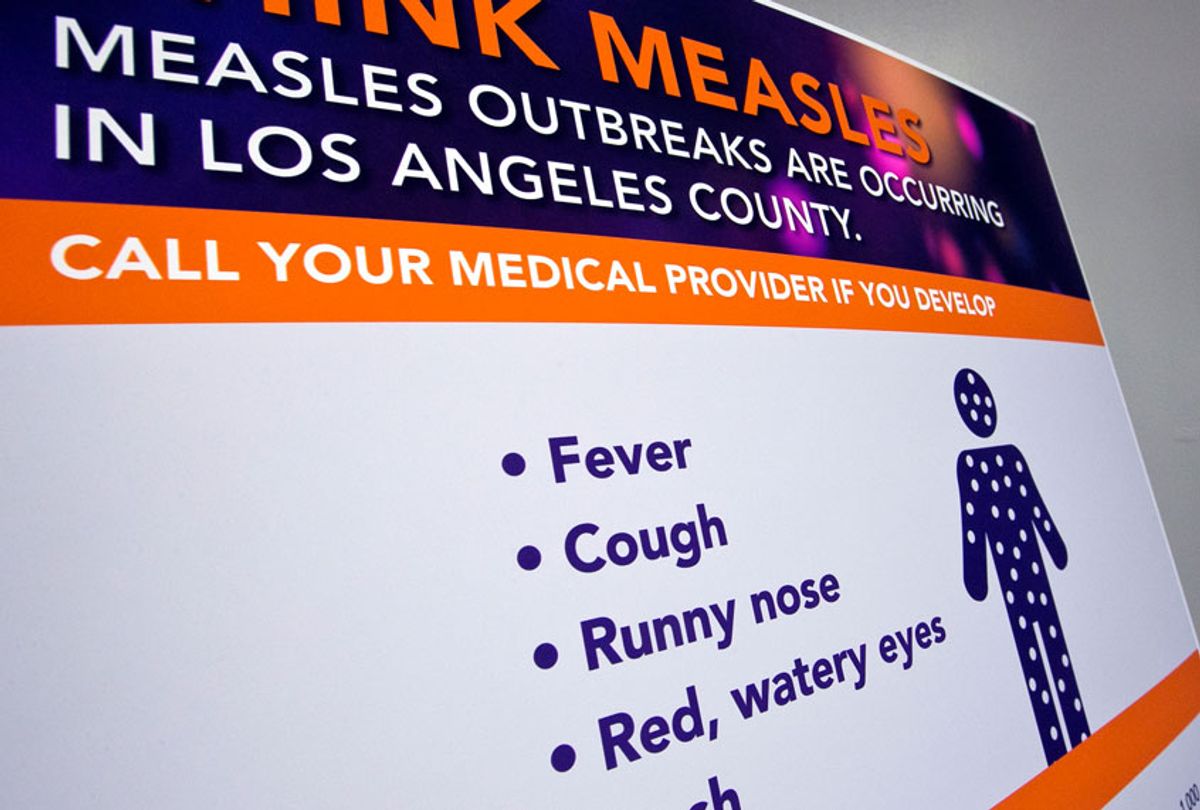 A poster released by Los Angeles County Department of Public Health is seen as experts answer questions regarding the measles response and the quarantine orders in Los Angeles Friday, April 26, 2019. (AP/Damian Dovarganes)
--

Small measles outbreaks have been reported in multiple regions over the last few months, but on Monday the Centers for Disease Control and Prevention reported those collective cases have set a record for a new national high. According to the report, 704 cases have been reported in the United States this year, surpassing the prior record set, which was 667 cases in 2014. The disease was considered eliminated in the United States in 2000.

Last week, the CDC confirmed there were 626 cases, which at the time officials noted "in the coming weeks" the number of confirmed cases would surpass those in 2014. It took less than a week for that to happen, showing the pace in which the disease is spreading. From last week, the number of reported cases has increased by 78.

The report states that more than 500 of the people infected in 22 states were not vaccinated. Sixty-six people have been hospitalized. The biggest outbreaks have occurred in two communities in New York: Rockland County and Brooklyn, New York. Both have strong Orthodox Jewish communities, where misinformation about vaccinations has been spreading. Other cases that have been reported to the CDC have occurred in Arizona, California, Colorado, Connecticut, Florida, Georgia, Illinois, Indiana, Iowa, Kentucky, Maryland, Massachusetts, Michigan, Missouri, Nevada, New Hampshire, New Jersey, New York, Oregon, Texas, Tennessee, and Washington.

The CDC says some of these outbreaks are linked to travelers who brought measles back from other countries such as Israel, Ukraine, and the Philippines.

“The resurgence of measles is of serious concern, with extended outbreaks occurring across regions, and particularly in countries that had achieved, or were close to achieving measles elimination,” Dr. Soumya Swaminathan, Deputy Director General for Programmes at WHO, said in a statement earlier this year. “Without urgent efforts to increase vaccination coverage and identify populations with unacceptable levels of under-, or unimmunized children, we risk losing decades of progress in protecting children and communities against this devastating, but entirely preventable disease.”

Since the mid 1990s, more than 91 percent of American children were reportedly vaccinated against measles. Measles is one of the most contagious infectious diseases, but after decades of measles vaccines being normalized, national health experts said in 2000 that measles had been eliminated in the United States. In 1912, according to the CDC, “measles became a nationally notifiable disease in the United States, requiring U.S. healthcare providers and laboratories to report all diagnosed cases.”

Measles deaths occurred by the thousands in the first two decades of the 20th century. After being declared eliminated, no deaths were reported until 2015, when a woman in Washington was the first to die in 12 years due to complications from measles. There have been no confirmed measles deaths in the U.S. this year.

Federal officials said they are concerned that the outbreak could gain footing in the U.S. again if the outbreaks are controlled soon.

“Vaccine-preventable diseases belong in the history books, not our emergency rooms,” U.S. Health and Human Services Secretary Alex Azar said in a briefing. “The suffering we are seeing today is completely avoidable.”

U.S. President Donald Trump has previously echoed some of the pseudoscientific rhetoric akin to the anti-vaccination movement. During a GOP debate in 2015, Trump went on a rant promoting false narratives about vaccinations, saying: "Autism has become an epidemic. Twenty-five years ago, 35 years ago, you look at the statistics, not even close. It has gotten totally out of control. I am totally in favor of vaccines, but I want smaller doses over a longer period of time."

The research of Andrew Wakefield, a British physician who claimed in 1998 to have found evidence of a correlation between the measles and autism, has been roundly discredited.