Barr was presented as a measured, reasonable "institutionalist." Fugeddaboutit: He's Trump's "Roy Cohn" after all 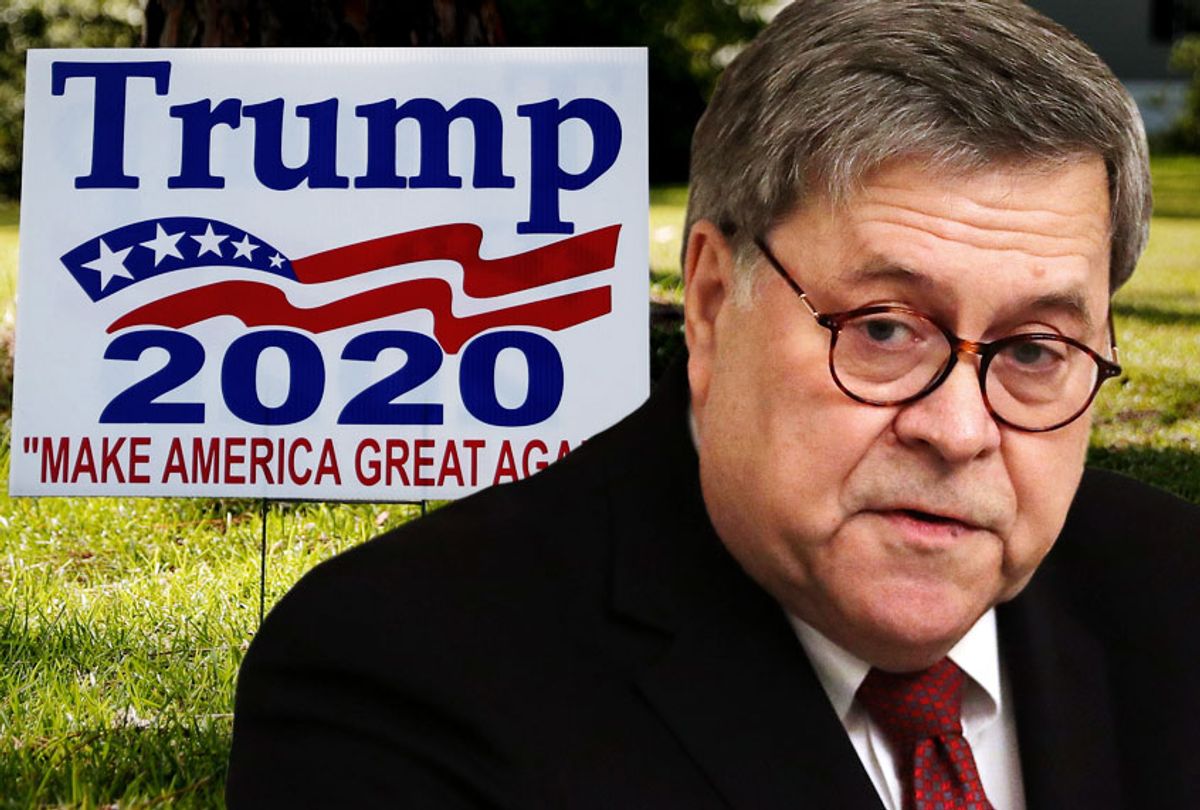 People in the media and politics bemoan the cynicism of our age, saying that people vote for a liar like Donald Trump because they believe all politicians lie and he's just more colorful about it. This era is producing men and women of such grandiose mendacity that it will be a miracle if the next generation believes that anyone in politics is even capable of acting in the national interest.  It's possible that Robert Mueller may be the last of his kind in the GOP and I'm not all that sure about him either. We'll have to see how this plays out to know whether Mueller pulled too many punches but for the moment he's all we have left of  a "just the facts ma'am" Republican straight arrow.

You certainly cannot say the same for his friend William Barr, the new attorney general. He has proved to be the most rank partisan in that role since John Mitchell, Richard Nixon's attorney general, who spent 19 months in jail for his part in the Watergate scandal. Even though I had my suspicions that Barr had spent too much time in the right-wing fever swamps, based upon the notorious unsolicited memo he sent to the White House and his comments to the news media, like most people I was hoping that he would be one of those old-school "institutionalist" types who would look at the evidence in the Mueller report and be as appalled by this norm-busting, law-breaking, power-abusing president as the entire world has been since it was released.

It turns out that we were not cynical enough. Not by a long shot. Rather than acting as an independent upholder of the law, serving the people, Barr is proving to be the most servile of all Trump's henchmen. He's not even as independent as the multiple yes-men in the administration who failed to follow Trump's orders but stayed on anyway. Barr seems to see himself as the president's trusted legal consigliere, helping him to avoid getting caught for his crimes. The president truly has found his new Roy Cohn, Trump's notorious mentor and personal lawyer who was eventually disbarred for egregious unethical conduct.

From the four-page "Barr letter" and its fatuous conclusion that Trump did not obstruct justice to the pre-release press conference in which Barr attempted to spin the report in the president's favor, the attorney general has been doing damage control. Over the last week, as Trump has said he will fight every request and every subpoena, Barr is now running interference between the Justice Department and the Congress.  He is refusing to appear before the House Judiciary Committee unless chairman Rep. Jerry Nadler, D-N.Y., shelves his plan to have part of the session run by committee counsel and hold a part of the hearing in closed session. Apparently Barr does not like the idea that the legal staff could follow up closely with a line of inquiry. He prefers the disjointed five-minute questioning format that never gets anywhere, which is a sad statement coming from the attorney general of the United States.

If Barr can't face a committee lawyer, perhaps he's not really fit to be the top law enforcement officer in the federal government. The Judiciary Committee lawyers interviewed many of the other participants in the Russia investigation, including former FBI director James Comey, in closed session. The only difference with Barr is that this will be a public hearing, which one might expect the self-described most transparent government in history to be happy to accommodate.

Barr has been around long enough to remember all the times that congressional committees had counsel question witnesses, including cabinet members. It most famously happened during the Watergate hearings when lawyers like Sam Dash and Richard Ben-Veniste became national figures, holding the president's men's feet to the fire. Chief counsel to the Senate's Iran-Contra committee, Arthur Liman, led the questioning in that inquiry. And considering that just a few months ago, the Republicans hired an outside attorney to question Dr. Christine Blasey Ford in the Brett Kavanaugh confirmation hearings, it's entirely absurd that Barr is balking.

Nadler refused to change his plans, explaining patiently that witnesses aren't allowed to dictate procedure to congressional committees, nor is the attorney general allowed to dictate to the legislative branch. (The Trump administration remains very confused about the separation of powers in general.) Nadler says he'll issue a subpoena if Barr refuses to show up. There is some talk about holding the hearings with an empty chair which would be very silly and unproductive.

Robert Costa of the Washington Post reported on MSNBC on Monday that Republican sources tell him the Democrats are being "political" and have no right to hold hearings that are impeachment inquiries in all but name. I think we know how to solve that problem, don't we?

Barr's outrageous behavior and the White House attempts to stonewall all forms of oversight are pushing the Democrats toward impeachment, whether they want it or not. Rep. Ted Lieu, D-Calif., a member of the House Democratic policy leadership team who sits on the Judiciary Committee, told the Washington Post's Greg Sargent, “If we can’t fact-gather, we’re going to have to use the other tools at our disposal and make sure our oversight responsibilities are respected.”

Lieu added, "If it turns out we can’t investigate because the White House is not complying with anything that Congress requests, then I think the caucus would support an article of impeachment on obstructing Congress in order to maximize our court position.” As Sargent points out,  Democrats have already said that fact-gathering and accountability is their mission for the moment, "but if Trump won’t allow that, they can threaten an impeachment inquiry in response, and note quite correctly that Trump is forcing them into it."

The third article of impeachment against Richard Nixon was for defying congressional subpoenas and oversight. Trump may be leaving Congress no choice but to do that again, if only to defend its own constitutional prerogatives. For a president with an approval rating that's been hovering around 40% for his entire tenure, that's a risky strategy.