The Maine AFL-CIO's support for the bill is a milestone, as labor remains divided on the Green New Deal nationally 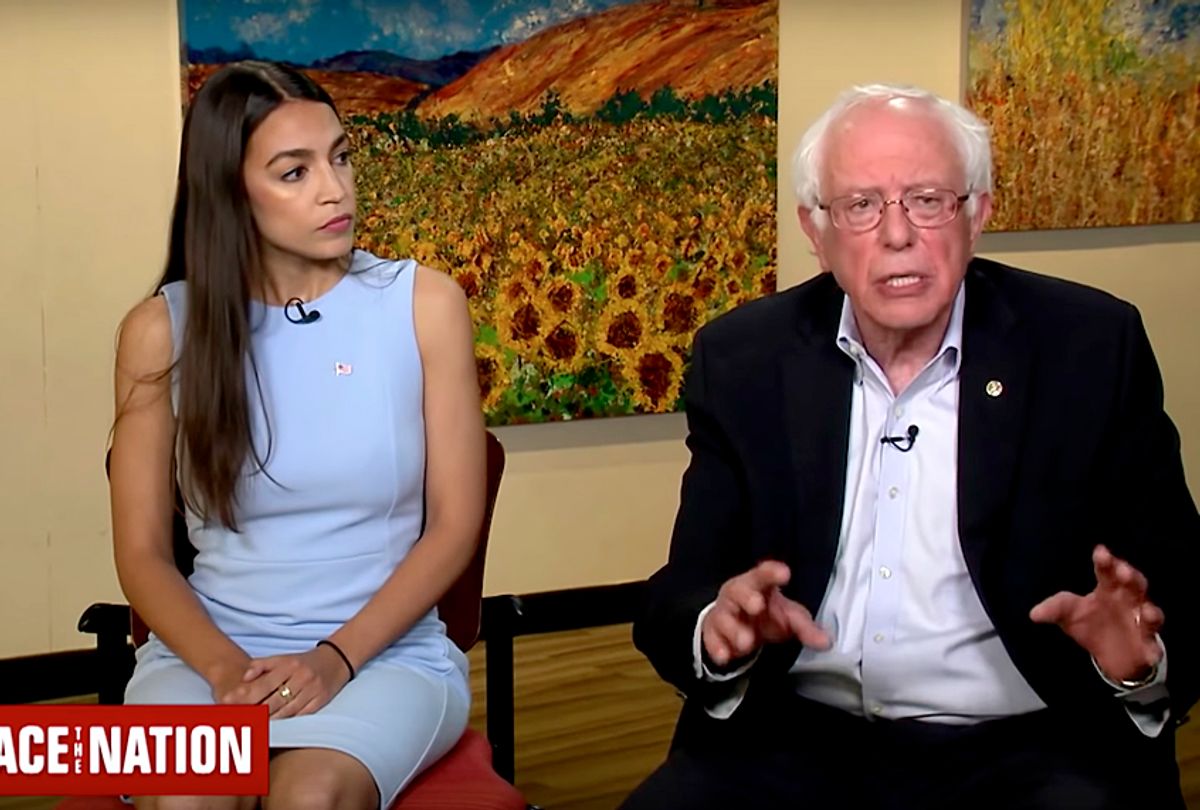 Alexandria Ocasio-Cortez and Bernie Sanders on "Face The Nation", both advocates for the Green New Deal, a Keynesian stimulus project comparable to President Roosevelt's New Deal albeit with an eco-friendly twist. (CBS)
--

On Tuesday, Maine lawmakers will hold a hearing for “An Act to Establish a Green New Deal for Maine” — a new climate and jobs bill that has the notable support of Maine’s AFL-CIO, the first state labor federation to endorse a Green New Deal-themed piece of legislation. The bill calls for 80 percent renewable electricity consumption by 2040, solar power for public schools, the creation of a task force to study economic and job growth, and a commission to help facilitate a just transition to a low-carbon economy. Its backing from a coalition of over 160 labor unions offers an instructive lesson for other states looking to build union power to tackle a warming planet.

The bill is the brainchild of Chloe Maxmin, a 26-year-old state lawmaker elected in November, and the first Democrat to ever represent her district. Maxmin, who has been an environmental activist since she was 12 years old, and co-founded the Harvard fossil fuel divestment campaign while in college, said she knew if she was voted into office she would approach climate politics in a different way.

One of the criticisms of the national Green New Resolution sponsored by Rep. Alexandria Ocasio-Cortez (D-N.Y.) and Senator Ed Markey (D-Mass.) is that it lacked a broad coalition of supporters when it was first introduced. But Ocasio-Cortez and Markey’s political strategy, they’ve explained, is to use the aspirational framework as an organizing tool over the next two years, to bring more key partners on board.

Maxmin, by contrast, sought to bring allies into her coalition prior to going public with the legislation, and Maine labor and environmental groups did not have a deep history of working together before. “I’ve been an organizer for a long time, and to build power and to really create something inclusive I knew it had to be inclusive from the beginning,” she told In These Times. “The traditional strategies that we’ve used around climate and climate policy just have not really gotten us very far.”

Maine has some unique characteristics: It is the most rural state in the nation, the whitest (roughly tied with Vermont), and the oldest. It’s also, as of 2019, one of just 14 states where Democrats control all three branches of state government.

While she knows her bill will be associated with the federal resolution, Maxmin stresses that hers should be understood as targeted legislation, specifically tailored to her state’s needs. “Of course, there are national parallels with not only the name but also echoing the themes of economic justice and opportunity, but it’s a very Maine-specific bill, and not meant to cover every component of the climate crisis,” she said.

Matt Schlobohm, the executive director of the Maine AFL-CIO, praised Maxmin for her deliberate efforts to “create a policy that was ambitious, aspirational and do-able” for working-class people. Maine’s labor community, which has about 12 percent union density, has not historically focused on climate issues or climate justice. Schlobohm thinks this legislation is a real chance for unions “to build trust and develop their analysis and capacity” in a meaningful way.

The bill sets less ambitious targets than the national Green New Deal resolution, which, among other things, calls for 100 percent renewable energy in 10 years, and includes language around reducing emissions from transportation and agricultural sectors. While the Maine Sierra Club supports the legislation, Maxmin acknowledged that some environmental activists have criticized her bill for not going far enough.

“Our approach was targeted legislation focused on economic and job growth in Maine,” she said, pointing to the solar projects for schools, and the jobs-focused task force which would report on its findings by next January. Like the state’s opioid task force which has paved the way to new state policies, Maxmin said she expects to be able to introduce more specific job legislation generated by the task force’s research next year. “There are other [environmental] bills going through the State House around transportation and agriculture,” she said. “This [bill] is for workers, low-income Mainers, and economic growth in Maine.”

Haley Maurice, a junior at Bowdoin College involved in the Bowdoin Climate Action group and a student leader with the national Sunrise Movement, has been involved in discussions with Rep. Maxmin to shape the bill. (Sunrise also endorsed Maxmin’s bid for office.)

“We started meeting in early February, and [Rep. Maxmin] was just really forward in saying we need young people involved,” she said. “I’ve been very impressed by her adamant belief in the democratic nature of the bill and in making sure that everyone who is affected by this is considered and at the table.”

Maurice said that while “other climate bills proposed in the Maine legislature have very ambitious timelines,” this is the first bill she believes really prioritizes how the energy transition will take place, and constitutes “a very strong starting point” for Maine. The legislation outlines requirements for a commission to study and track progress towards a low-carbon economy, particularly for those most adversely impacted: people from demographic groups that have been historically affected, and people who are low-income and cannot participate in energy efficiency programs.

Moreover, Maurice doesn’t think a state bill on a less ambitious timeline is at odds with the work that she and her Sunrise colleagues are pushing for on the national level. If anything, Maurice said, it just reinforces why the federal government needs to also be involved in the process.

“When you say we need 100 percent renewable energy by 2030, and we need a faster timeline, you need to think about the burden that places on Mainers here,” she said. “And if state bills have a slower timeline than what science is saying we need, I don’t think that is necessarily contradictory to our values. States need to push forward in the ways we can now while ensuring these transitions are happening in an equitable way, and we need a federal Green New Deal to bolster the work of the states.”

The Maine AFL-CIO's support for the bill is an important milestone, as labor remains divided on the Green New Deal nationally. While the AFL-CIO’s Energy Committee responded critically to the Green New Deal resolution, unhappy with both some of its specific language and its lack of specifics, other labor organizations have started to mobilize in support. In late March the Los Angeles County Federation of Labor approved a resolution in support of “a Green New Deal or similar effort” to address climate change and economic inequality. In mid-April, Sara Nelson, the international president of the Association of Flight Attendants, which represents 50,000 flight attendants across 20 airlines, wrote an op-ed in in support of the Green New Deal, and the general urgency of tackling climate change.

Schlobohm said if he were to give advice to environmental leaders about how to organize effectively with labor, he’d encourage them to make deliberate efforts to understand unions, and engage them in a good-faith process. “And I think just the basic organizing 101 of showing up for each other,” he said. “There’s a lot of strikes and picket lines these days. Do environmental organizations show up at teacher strikes and grocery worker strikes? The same question should be asked of unions, but I think there’s just opportunity to build solidarity in this moment.”

For his labor allies, Schlobohm says the energy transition is going to happen, so it can either happen “with us or to us” and “one option is far superior than the other.”

Ultimately Schlobohm feels optimistic about the future of climate-labor organizing, says there are lots of opportunities for “win-wins”—and points to the recent organizing done by climate and labor groups in New York.

“There are renewable energy policies moving in every state in the country,” he said. “And every single one of those policy frameworks has the opportunity and levers for job quality and labor rights standards.”