As George R.R. Martin has written, don't trust prophecies in Westeros — they'll do you in 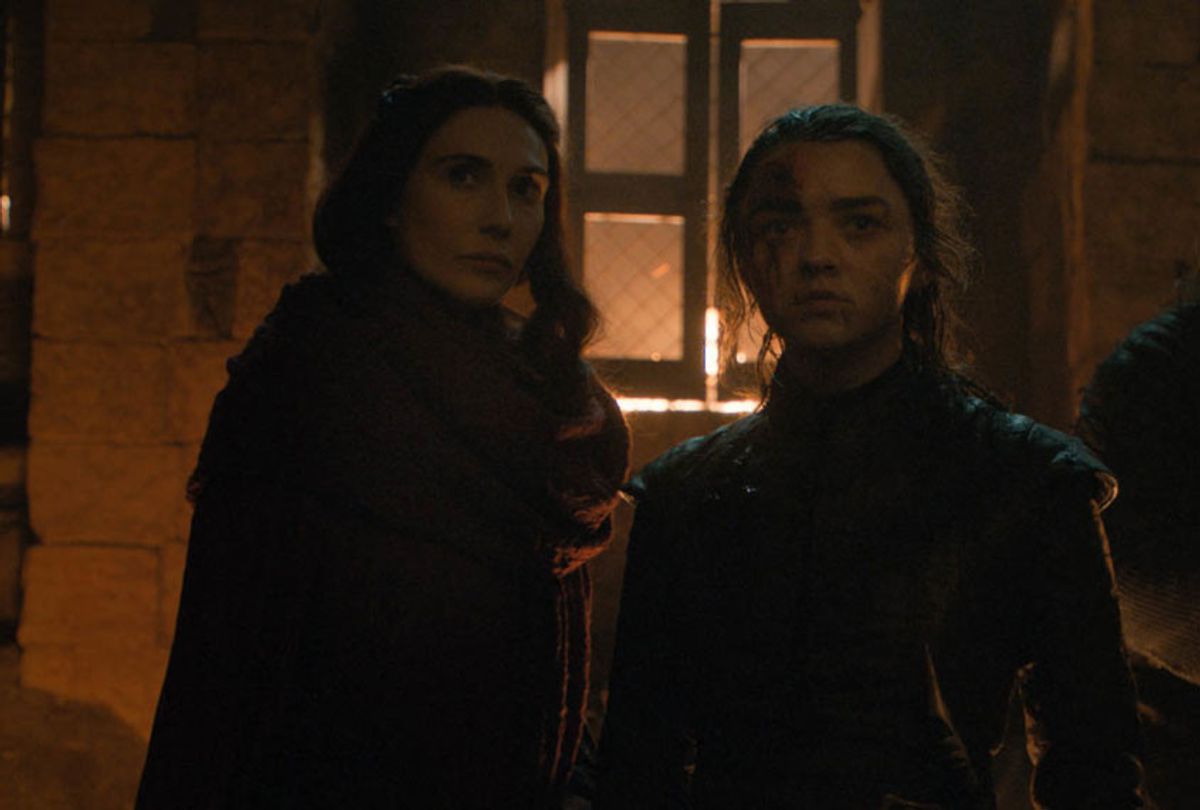 Spoilers ahead for "Game of Thrones," both the TV show and the books. You've been warned! Stop reading now if you don't want to know.

In its eighth and final season, "Game of Thrones" has proved once again that it's still a show that has the ability to upend audience expectations in ways that are both shocking but ultimately satisfying, from a story perspective. Most of the surprises — Ned Stark's beheading, the Red Wedding, Oberyn Martell losing his fight against The Mountain — have been famously gutting, but on Sunday night's long-anticipated episode, "The Long Night," the twist in question was of a happier sort.

For years, fans of the show and especially George R.R. Martin's "A Song of Ice and Fire" books, which the show is based on, have debated the identity of the "prince (or princess) who was promised," the rebirth of a legendary figure named Azor Ahai. A lot of characters have been offered up, but most fans assume it would either be Jon Snow or Daenerys Targaryen, both of whom have spent the series racking up Chosen One points through classic high fantasy feats such as being reborn after death or walking through fire to bring forth dragons.

But, in the end, it appears both Jon and Daenerys were red herrings and instead the promised princess was Arya Stark, the youngest daughter of the Starks and a character that, while long beloved, was generally assumed to be more of a support character for Jon than a hero in her own right.

While there's no telling what the tight-lipped Martin intends for the end of his book series, it's also fair to say that it's very Martin-esque to have this twist of Arya fulfilling a prophecy that has been seeded throughout both the books and shows. In the "A Song of Ice and Fire" series, Martin loves to play with the idea of prophecy and how prophecies never turn out how characters expect. Over and over again, characters misinterpret prophecies, often in ironic fashion, causing their own dooms in their bids to either fulfill promising prophecies or prevent distressing ones.

"Prophecy is like a half-trained mule," Tyrion Lannister cracks in the fifth book in the series. "It looks as though it might be useful, but the moment you trust in it, it kicks you in the head."

In Martin's world, prophecies only ever really make sense after they've been fulfilled. And that much is true when it comes to Arya's path to becoming Azor Ahai reborn.

"The Long Night," by design, is a dense and often confusing episode, meant to illustrate the fog of war. But upon my second watching, knowing that it would end with Arya stabbing the Night King, it was easier to see how much the episode was focused on all the pieces — and characters — falling into place so that Arya would be ready and able to strike the last blow at exactly the right moment.

Every character that audiences have seen struggle with the question of their own destiny in the series helps Arya fulfill a mission even she didn't know she had.

Beric Dondarrion, who was brought back from death countless times by a red priest who said that the Lord of Light had a purpose for him, dies after covering Arya's path through the zombie horde to the Night King. The Hound, also told that the Lord of Light has a destiny for him when he despaired of his purpose, joins him to protect Arya in her mission. Jon, brought back from the dead because of yep, some vague sense of divine destiny, was the dragonrider needed to unseat the Night King from his own dragon so that Arya could have a crack at him. Theon, a character whose continued survival has been a mystery to both himself and audiences, also dies protecting Bran Stark and allowing Arya to fulfill her destiny.

The show underscores this sense of destiny when Theon apologizes to Bran for all the terrible things he's done and Bran, a greenseer who can look at all of human history, calmly assures him it was all for the purpose of bringing Theon to this moment.

But perhaps most important to the story is Melisandre, a red priestess whose main role throughout the series is to illustrate the dangers of hubris when it comes to prophecy. Melisandre's purpose is to aid Azor Ahai in being reborn — of that there is no doubt — but she has a terrible track record in trying to guess who that person is and what her duty to that person should be. For most of the series, she thought it must be Stannis Baratheon, a conviction that led her to take the drastic step of sacrificing his daughter to the Lord of Light before he was routed in battle. Chastened and guilt-ridden, Melisandre has since guessed that it might be Jon or Daenerys, but her prior mistakes held her back from being certain.

It's only in the final moments of the battle, when all the pieces fall into place, that Melisandre finally sees that it's Arya, a girl she once prophesied would "shut many eyes forever."

Reminded of that prophecy, Melisandre says, "Brown eyes, green eyes—and blue eyes," the realization dawning that the "blue eyes" she saw are those of the Night King. At dawn, after Arya ends the war with the dead, Melisandre, having fulfilled her own destiny, wanders into the snow to die.

Melisandre's arc has always been about the dangers of hubris in predicting the future, so it makes sense that her story ends here. But her story also serves as a warning to the audience that has spent years trying, as Melisandre did, to game out who the prince who was promised would be: It probably won't be who you expect and the prophecy probably won't make sense until after it's fulfilled.

Certainly, the section of the fandom that is currently wailing in anger that the prince who was promised wasn't Jon (a tirade born as much from sexism as thwarted expectations) should look at Melisandre's body collapsing in the snow and take the time to ponder what the story is telling us about the pitfalls of being too confident in your predictions of the future.

So does Arya, in retrospect, fit the prophecy? Most of the language of the prophecy is metaphorical, stuff about being "born again amidst smoke and salt" and able to "wake dragons out of stone," so who knows? Certainly, it's safe to say that Arya's path through the story, in which she experiences severe trauma and forms herself into an elite assassin, has plenty of metaphorical smoke, salt, and dragon-hot anger to justify this reading.

But from the beginning, the big tell of Azor Ahai was always that he/she would be wielding Lightbringer, "the red sword of heroes."

"In this dread hour a warrior shall draw from the fire a burning sword. And that sword shall be Lightbringer, the Red Sword of Heroes, and he who clasps it shall be Azor Ahai come again," the prophecy reads in the book.

Sounds a lot like it could be Arya's dagger, which entered the story in the first season, when an assassin was sent to murder Bran with it, kicking off the War of the Five Kings that would kill off most of the Stark family. From that fire of war, and through great sacrifice, Arya has managed to lay claim to this weapon and, in a moment of poetic closure, used it to protect the same Bran who survived the story's first attack with the dagger.

Will we ever know for certain if Arya is Azor Ahai? Probably not. Martin's story has always been about how the truth of any story gets lost to the mists of time, and legends and propaganda all too often fill out the details of what people think they know. The first Azor Ahai's story is clearly meant to be a fairy tale more than a straight recounting of the knowable history of this fictional world.

The ambiguity, the inability to ever say for certain how we know what we know, has always been the point of this story. And by forcing often acrimonious debates in the real world about this, both Martin and the "Game of Thrones" writers have certainly proved their point about the tenuous nature of knowledge of both the past and of the future.