If you think measles is bad, you should have been around for polio 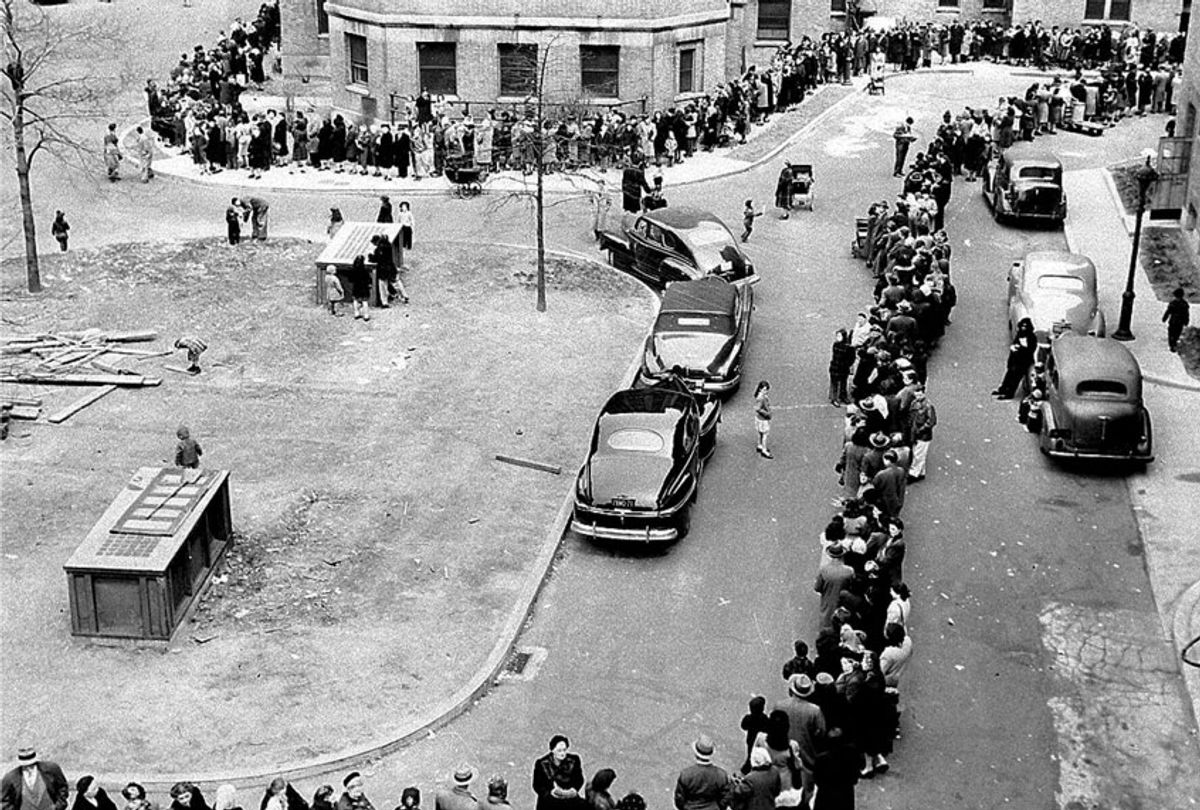 In this April 14, 1947 file photo, a long line winds toward the entrance to Morrisania Hospital in the Bronx borough of New York, where doctors are inoculating against smallpox. In an attempt to halt the spread of the disease, officials said city residents were being vaccinated at the rate of eight a minute. (AP Photo)
--

Leaving Kabul, Afghanistan for the border with Pakistan was like traveling back in time from the 21st to the 5th century. I was there in the spring 15 years ago. The dirt roads from one tiny village to another were pock-marked with deep craters, and enormous boulders the size of Volkswagens blocked one lane and sometimes the entire road, necessitating lengthy detours. None of the villages had electricity. Men and boys walked along the roadsides driving strings of donkeys laden with firewood and grain and cans of kerosene. At night, the sides of the mountains on either side of the road closed like great curtains. The darkness at the bottom of the gorge formed by the Kunar River was absolute. You couldn’t see your hand in front of your face.

I thought I had journeyed back in time as far as I could go until I reached Asadabad, an outlaw smuggling town only a mile or two from the border with Pakistan in the Pashtun area largely controlled by the Taliban. Asadabad sits at the intersection of two rivers, the Pech and the Kunar. Both rivers were running swift and icy with glacial snowmelt from the foothills of the Himalaya Mountains when I arrived in a four-wheel-drive truck I had taken from Jalalabad, a trading town to the south. The 35 miles of road between the two towns were so bad it took more than eight hours to make the drive. The truck’s shock absorbers failed along the way, and about two miles outside of the town, they were bleeding fluid all over the brake rotors, and the brakes failed too.

The man who rolled under our jacked-up truck to replace the shocks didn’t have legs. “Polio,” explained Esos, my translator. “No vaccinations here. It’s an epidemic.” Walking around the town a few minutes later, we were accosted by dozens of children hobbling along on makeshift crutches or pushing themselves on low, wheeled platforms they had cobbled together from plywood and shopping car wheels. Other children had open sores from staph infections or were marked with the red splotches and dots of measles. Adults, too, victimized by polio, limped past on crutches they made from tree branches wrapped with rags. I thought polio had been eradicated decades ago. I was wrong. You didn’t have to be an anti-vaxxer to expose yourself to the diseases of polio and measles in Asadabad, Afghanistan in 2004. All you had to be was alive and poor.

The World Health Organization has waged a campaign to eradicate polio in the border region between Afghanistan and Pakistan, vaccinating children everywhere they can reach. An outbreak of polio in 2014 claimed 202 victims in Pakistan alone, according to The Guardian. Health workers blame the Taliban for hindering their efforts. The fact that a fake vaccination program was used by the CIA to gather intelligence on the whereabouts of Osama bin Laden in 2011 didn’t help. Militant opposition to the vaccination programs fell off over time, however, and by last year there were only 12 cases reported in Pakistan. The number of polio infections in Afghanistan has similarly gone down, but regions under Taliban control continue to be hard to reach by aid workers and vaccinators working with the WHO. Parents of Afghan and Pakistani children often travel many miles by foot to reach vaccination sites in less dangerous areas. Cross-border vaccination teams pursue families involved in illicit smuggling and nomadic peoples who graze herds of sheep and goats along the unmarked border between the two countries.

Contrast what’s going on halfway around the world to this country, where this week the Center for Disease Control announced that the measles outbreak had exceeded 700 cases for the first time. “More than 500 of the 704 cases recorded as of last Friday were in people who had not been vaccinated, the CDC reported,” according to the Times. “Sixty-six people have been hospitalized, a third of them with pneumonia.” New York City reported that there have been 423 cases of measles since the outbreak began last October, most heavily among the city’s Hasidic community. Upstate counties reported 236 more cases, also mostly among the Hasidim. Across the country, somewhere around 100,000 children under the age of two have not been vaccinated, according to the CDC. Some infants and young children are allergic to elements used to manufacture the vaccine or have health complications, but most are not vaccinated because their parents avoid the procedure. These people have become known as “anti-vaxxers.”

There weren’t any anti-vaxxers in Leavenworth, Kansas when I was in the second grade. Within a couple of months in 1954, an outbreak of polio infected more than 70 school children at Fort Leavenworth, where my father was stationed by the Army. If you wanted a petri-dish for poliovirus, you couldn’t do much better than eastern Kansas. The summers were insanely hot, with temperatures regularly in the 90s, and humidity hung in the air like an invisible fog. Everybody at Fort Leavenworth had to be there because husbands and fathers were under Army orders, so you couldn’t just pick up and leave. And parents back then didn’t pull their kids out of school, even for a disease epidemic. I remember being told to wash my hands after using the bathroom and to be careful not to touch other kids. But the virus spread fast and wide among schoolchildren that year. There were kids who had contracted polio and suffered paralysis or weakened legs and other ailments in every single class in the Fort Leavenworth grade school.

There was no polio vaccine yet, so we were taken to get shots of gamma globulin purified from the blood of polio survivors. It was thought to be effective in preventing polio, or at least in reducing the severity of the disease if you were infected. I remember as I got out of the car at the post clinic, I could hear the screams of kids inside as they took their shots. Gamma globulin had the consistency of motor oil, so they had to use huge needles to get it into your ass, and it took more than a minute to administer the shot. It was incredibly painful. I screamed. So did my brother and sister. Every kid did, the injection hurt so bad.

We were among the first kids in the country to get the Salk vaccine in the early summer of 1955 when it was released. One quick shot with a comparatively tiny needle and it was over. Nobody was more happy to see the development of a vaccine for polio than the schoolchildren of Leavenworth, Kansas, and nobody was a bigger hero to those kids and their parents than Jonas Salk.

That’s why I just don’t get these anti-vaxxer parents. A disease like measles can be deadly, although advances in medical treatment over the last half century make that less likely (There have been no deaths among the 700-plus measles cases counted by the CDC. So far.) Polio can be deadly, and it carries the danger of paralysis and weakening of legs in children. In adults, paralysis results in one in 75 cases, and quadriplegia is possible. Polio and measles are terrible diseases. What parent would want his or her child to be infected by one . . . or by both?

I think two things are at work with the anti-vaxxers. The first is the desire of modern parents to be involved in everything regarding their children. Helicopter parenting reaches its apex with anti-vaxxers. You’re not touching my child with that needle unless I say you can! The second is a diminution among the general population to tolerate entreaties to the greater good. That’s the way a vaccine works. It works for everyone if everybody gets vaccinated, but its effectiveness is reduced by the unwillingness to join together in common cause. Right wing survivalists are the fringe of this phenomenon, but so are organic-chomping arch-liberals, who are convinced that if their kids eat well and exercise properly and live healthy lives, everything will be peachy. Vaccinations for diseases like polio and measles have worked so well, whole generations have been born and reached adulthood without ever seeing people with either disease.

It’s too bad anti-vaxxers of either stripe don’t visit places like Asadabad and see the results of not being vaccinated. I saw an epidemic of polio in grade school, and 50 years later I saw another one halfway around the world. It scared me to death both times. Anti-vaxxers should be scared too.