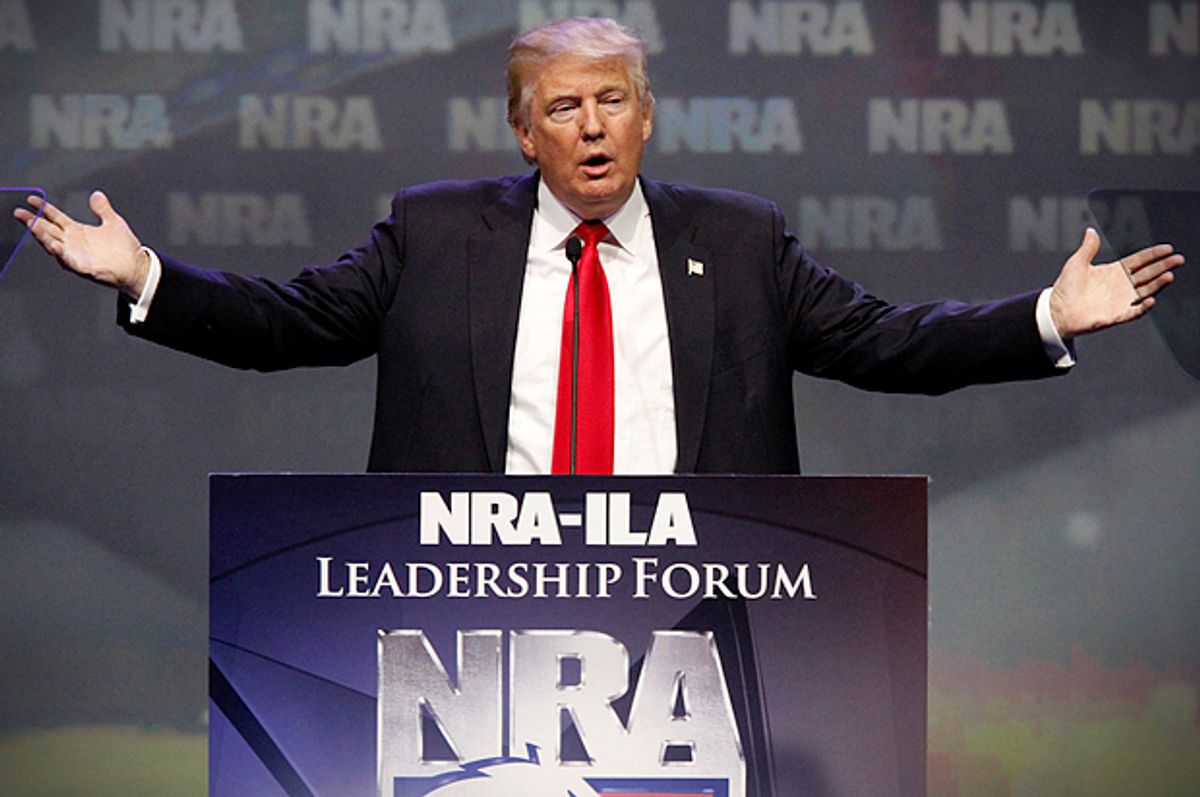 Senate Democrats have asked current and former National Rifle Association executives and the organization's public relations firm to turn over documents as they investigate allegations of self-dealing and examine the powerful gun lobby group's nonprofit status.

The inquiry comes amid news that the NRA has been rocked by an internal leadership fight that appeared to come to a head last weekend at the group's annual meeting in Indianapolis. In a letter to the NRA's board last week, LaPierre alleged that North had tried to extort him by threatening to reveal a "devastating account" of the NRA's finances unless LaPierre stepped down from his position and withdrew the NRA from a lawsuit it had filed against Ackerman.

North sent the board a letter of his own last week, saying he was only acting in the NRA's best interests and that he was forming a "Crisis Management Committee" to investigate internal financial matters. North had previously sent a longer letter to the NRA board highlighting allegations of financial misconduct, including more than $200,000 of wardrobe purchases by LaPierre that were charged to an NRA vendor.

North announced Saturday that he would not run for re-election after the Wall Street Journal, the New York Times and the New Yorker all published prominent articles exploring alleged financial mismanagement by top officials at the organization.

The senators, whose congressional panel has jurisdiction over tax-exempt organizations like the NRA, have reportedly asked for all supporting evidence for the financial misconduct allegations. William Brewer III, the NRA's outside counsel, pledged the organization will "cooperate with all appropriate information requests."

News of the lawmakers' inquiry comes as outside scrutiny of the gun-rights group is growing.

New York Attorney General Letitia James announced earlier this week that her office had launched an investigation into the tax-exempt status of the organization, which is chartered in the Empire State. James has issued subpoenas and sent letters telling the organization and its affiliated entities to preserve all relevant financial records.

Following the news of the attorney general's probe, President Donald Trump accused James of illegally investigating the NRA and called on the group to "get its act together."

"The NRA is under siege by [New York Gov. Andrew] Cuomo and the New York State A.G., who are illegally using the State's legal apparatus to take down and destroy this very important organization, & others," Trump wrote in a tweet Monday. "It must get its act together quickly, stop the internal fighting, & get back to GREATNESS - FAST!"

James, during her campaign for attorney general last year, vowed to investigate the NRA's status as a nonprofit. Her threat to look into the group reportedly sparked NRA's internal power struggle and prompted the group to launch an internal review of its finances.

Cuomo, New York's Democratic governor, responded to Trump's criticism of the probe by taking aim at the president's lack of action to curb gun violence, despite the epidemic of mass shootings and the rising number of deaths from firearm injuries in the United States.

"The scourge of gun violence is a national crisis plaguing our country and killing our children. It demands action. And action, Mr. President, requires true leadership," Cuomo said.

"The only thing illegal is the gun lobby's insurance scheme," he continued. "Unlike you, President Trump, New York is not afraid to stand up to the NRA. I will continue to fight for the children of this state. As for the NRA, we'll remember them in our thoughts and prayers."

Cuomo's jab at the president's inaction on gun control came just days after the president spoke at the NRA's annual meeting last weekend.

After the February 2018 mass shooting at a high school in Parkland, Florida, Trump promised to take action to curb gun violence, noting his support for raising the age for purchasing a firearm. To no one's surprise, the president ultimately walked back his support for raising the minimum age for purchasing firearms, after he met with NRA leaders who forcefully opposed that proposal, along with Trump's earlier apparent endorsement of universal background checks for gun purchases.