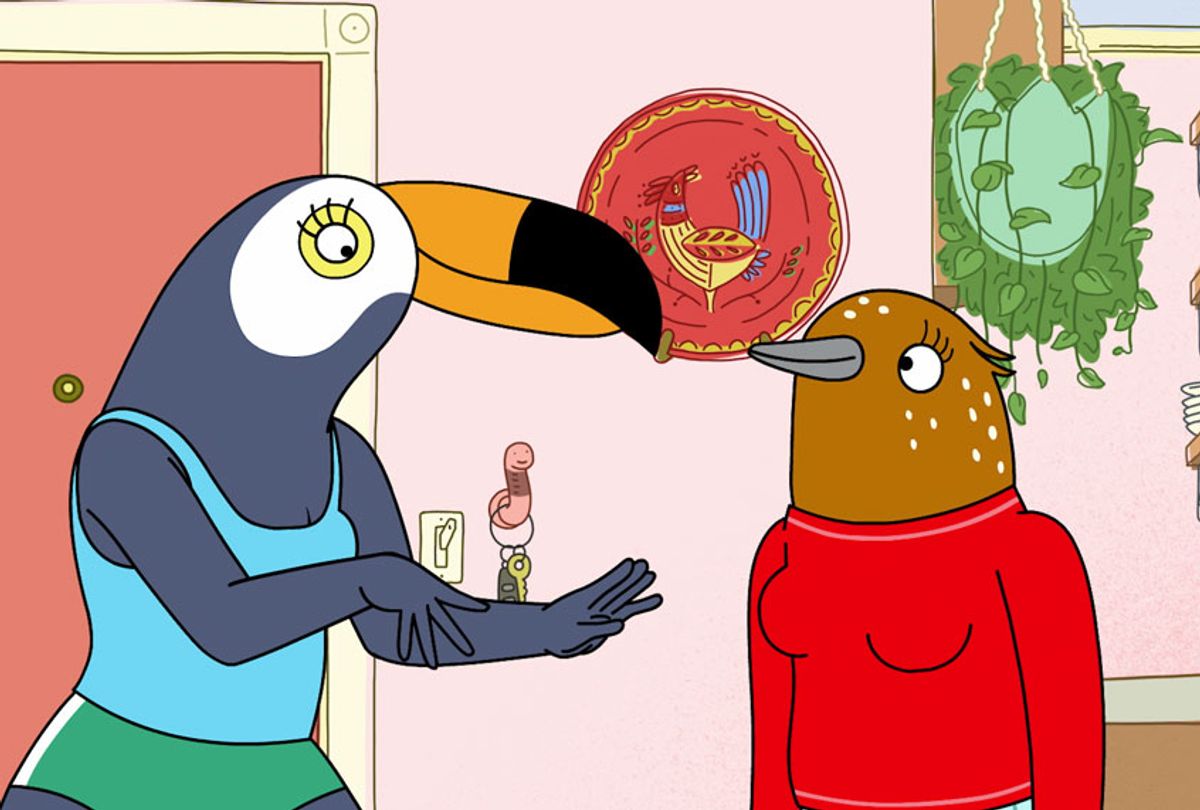 “Tuca & Bertie” displays a zest for boobs. They bounce on the sides of tall buildings during the title sequence and fly free on the topless torso of an intimidating, oh-so-cool plant. They have a mind of their own in cartoonist Lisa Hanawalt’s new Netflix series, even to the point of getting fed up with one harassment too many.

“No! Absolutely no. I will NOT with this sh*t,” cries one such ticked off titty, popping off her owner’s chest in revolt and heading for an exit. “I am finished. I’m finished! I’m done with today. I need a drink!”

In case that bit doesn’t make it apparent, Hanawalt’s new Netflix series is not a kid’s show. Yet I’m compelled to state this plainly because despite its front-loading of adult themes and the series’ focus on best friends who happen to be 30-something birds, around halfway through the premiere episode I was tempted — only for a nanosecond — to write off this show as too saccharine and juvenile.

Soon after it dawned on me that this viewpoint is influenced by years of absorbing Adult Swim and nodding off to nightly viewings of “Rick and Morty” and FX’s “Archer.”

What these and other popular adult-targeted cartoons have in common is that they were created by and, for the most part, written by men. Adult Swim intentionally skews male, actually: A couple of years the guy who runs it, Mike Lazzo, very charmingly opined that the reason his network hadn’t hired women showrunners is that the ladies "don’t tend to like conflict, comedy often comes from conflict, so that’s probably why we (or others) have so few female projects."

Now, at least, one female showrunner has landed her animated series on Netflix. “Tuca & Bertie” proves that placing an animated world into the hands of a woman yields a noticeably different result in the way that the arcs of its female characters play out.  And that may clang a bit against the sensibilities of an audience long conditioned to viewing and valuing female characters in specific ways.

The free-spirited and recently sober Tuca (voiced by Tiffany Haddish) and her responsible, anxious song thrush of a bestie Bertie (Ali Wong) operate in a reality resembling that of typical 30-something women navigating that uncharted territory between early legal adulthood and the serious, “let’s apply for mortgage pre-approval” version. They're also hilarious and crude. The show kicks off with Tuca moving into her own place — but not too far, just a floor above her codependency partner — so that Bertie’s doting boyfriend Speckle (Steven Yeun) can move in to the place the women used to share.

Hanawalt, the production designer behind the service’s critically-acclaimed “BoJack Horseman,” intentionally distinguishes this world of anthropomorphic animals from her other unrelated one by injecting a playful bounciness into her avian-dominated world, the sort fantastic flexibility usually associated with kids’ cartoons.

Thus, a mysterious neighbor is a plant who reclines topless in her chair as turtles mill around her, because why not? And Tuca, a toucan in hot pants, can harbor a crush on a hot monkey who works as a deli while Bertie battles a misogynist bro of a co-worker (a rooster, to get the point across) who steals her ideas.

Hanawalt previously stated that she wants "Tuca & Bertie" to show how gross women can be. Frankly that’s not news to anyone who’s caught a few episodes of “Broad City,” although neither Ilana nor Abbi ever unleashed a torrent of thrill-seeking sex bugs from her pants in a grocery store.

Mind you, the field of adult animation doesn’t lack for interesting women in its scripts. “Archer,” for example, is almost entirely written by one guy, Adam Reed. He’s created a number of witty, intelligent female characters as checks upon and foils to the eponymous hero.

They also represent aspects of the male gaze: Mallory Archer, Sterling’s mother, is a spoof of a hard-boiled dame, pickled by years of contending with male ineptitude and an ocean’s worth of booze. Sterling’s on-and-off-again lover and fellow spy Lana Kane is a more capable leader than he, and for whatever reason, she maintains a soft spot for him.

Throughout the series Lana also appears in various states of undress, giving the viewers a good gawk at her totally bangin’ boobs. (Reed also practices turnabout as fair play, getting Archer naked for various comedic purposes.) To be clear, I adore Lana and Mallory and, for that matter, Pam and Cheryl. But I cite these character specifically because their rendering completely differs from how “Tuca & Bertie” draws women, and how they view themselves and handle the slights life heaps upon them.

All the residents of Birdtown have a rubbery flex and bend to their movements lending an additional blanket of absurdity to the action, all taking place in world that includes, among other things, getaway spots built around lakes full of jelly. What stands out more is the ways that “Tuca & Bertie” depict the joy and mystery — and conversely, the mundane boredom — with which women regard their bodies.

One darker moment shows a bird consuming her own egg not as a plot point, but because it’s, you know, in the fridge. Less surreal are the frustrations, setbacks and a conflict (conflict! In an animated comedy created by a woman!) central to this season’s arc, all entirely realistic and recognizable to flesh-and-blood women who have dealt with all manner of gender-based discrimination and demeaning sexual harassment centered upon their bodies. In this context the breasts dangling on the sides of buildings become a meaningful backdrop to the show’s intentionally bizarre oddity, a way for Hanawalt to declare, “we are fascinating funny meat, and our flesh is ours to enjoy and not for anyone else to use to determine our value.”

Much in the same way “BoJack” progresses, the innocent goofiness permeating early episodes of “Tuca & Bertie” masks dark sorrows born of trauma, emerging slowly but with steady assurance as the season progresses and never losing site of the characters' — yes, I’ll say it — humanity. The comedy’s eventual, near-perfect emotional landing in the finale seals it in place as one of the best new series depicting the rocky road of navigating a chapter of life for which no clear flight paths exist, for men or women.

It assures us there’s a lightness beyond all the clutter, held aloft by a sweet, heartfelt, very adult sort of humor that draws and maintains our focus.