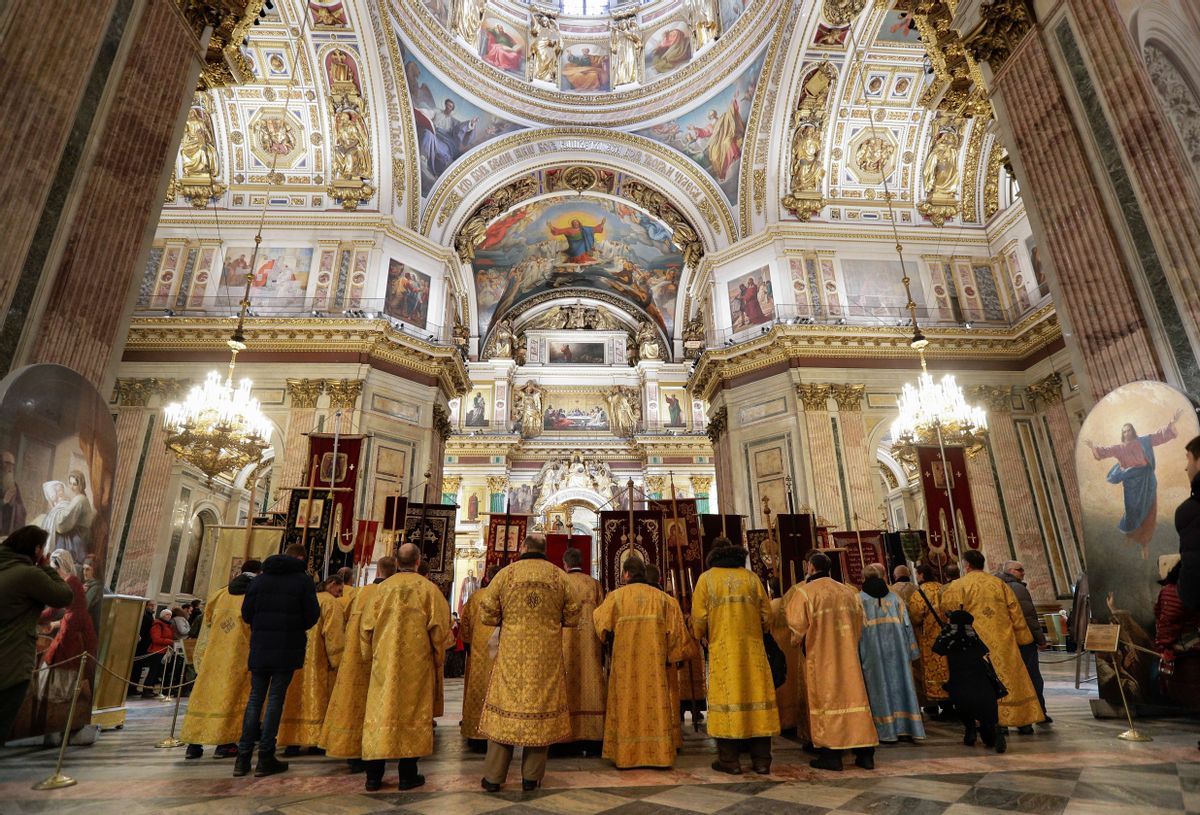 Orthodox priest and believers attend a Sunday service in the St. Isaac's Cathedral in St.Petersburg, Russia, Sunday, Feb. 12, 2017. St. Petersburg Orthodox eparchy held a cross procession around the city's St. Isaac's Cathedral to support the plans on the cathedral's handover to the Russian Orthodox Church. Currently the Cathedral has a museum status. The cross procession gathered around 1000 people. (AP Photo/Dmitri Lovetsky) (AP)
--

Prominent Russian nationals and members of the Russian Orthodox Church (ROC) continue to build bridges with American right-wing politicians and may be influencing policy.

Despite being sanctioned by the US Department of Treasury and the European Union for crimes in Ukraine, the same Russians under investigation for meeting with National Rifle Association (NRA) members are using Christian fundamentalist groups as a conduit to influence lawmakers.

Russians continue to skirt around sanctions by penetrating American churches and “family values” nonprofit organizations, and by manipulating IRS 501(c) loopholes, which do not require these groups to disclose their donations.

This is similar to the way members of Vladimir Putin’s inner circle infiltrated the NRA.

Hanick and Malofeev successfully modeled their propaganda network after Fox News. Hanick moved to Russia in 2012; four years later he, his wife, and his kids converted to the Russian Orthodox faith. Malofeev is currently the subject of six US criminal investigationsinto Russian ties to the NRA.

Not only is Malofeev suspected of laundering money into the NRA’s coffers, he has bankrolled and hosted events for the World Congress of Families (WCF), a right-wing Christian coalition based in Rockford, Illinois. Hanick serves on the WCF planning commission.

Labeled as an anti-LGBT, anti-women’s rights hate group by the Southern Poverty Law Center, the WCF was formed in 1997 as an offshoot from a Moscow/DC collaborative think tank, the National Commission on Children. It was headed by Reagan-appointed Hillsdale College professor Allan Carlson. The WCF serves as an international umbrella organization for at least 50 “family values” nonprofit groups.

Over the past few years, the WCF has hosted its conferences in former Soviet countries and was scheduled to host its 2014 event in Russia — but the event was canceled due to Russia’s annexation of Crimea that year. But according to recently hacked and published emails, Russian and American representatives met in Moscow anyway, just a few months after Russia annexed the Crimean peninsula.

Documents reveal Malofeev and his close associate Sergei Rudov attended a swanky “family values” conference in Moscow, schmoozing with Dan Schmidt — then vice president of the American right-wing Bradley Foundation. Rudov is head of one of Russia’s largest Christian Orthodox philanthropies, the St. Basil the Great Charitable Foundation, and he’s also under investigation for his ties to the NRA. Malofeev, one of the most prominent figures of the international homeschool lobby, met with representatives of the Virginia-based Home School Legal Defense Association (HSLDA) Mike Donnelly and Michael Farris. Also in attendance was Igor Shchegolev, a then advisor to Putin, and Aleksandr Dugin, the neo-fascist ROC leader dubbed “Putin’s Rasputin.”

Chapman was joined by San Diego megachurch pastor Jim Garlow, the Newt Gingrich–appointed chairman of the Renewing American Leadership nonprofit, known for his failed, anti–gay marriage California Proposition 8 bill, which passed but was overturned by the courts. Brian Brown, president and co-founder of the International Organization for the Family, who in 2012 launched a boycott against the Starbucks coffee chain for their support of gay marriage, was there. Prominent Kremlin guest speakers included Archpriest Dmitri Smirnov, as well as Alexey Komov, director of International Programs at Rudov’s St. Basil the Great Foundation.

A growing political force in Putin’s Russia, the ROC operates as a large corporation tainted with corruption, bribery scandals, money laundering, and tax evasion. Putin has shaped the Orthodox ideology, which parallels that of extreme Christian fundamentalism in the US. An ardent foe of homosexuality and any attempt to put individual rights above those of family, community, or nation, the ROC helps project Russia as the natural ally of all those who pine for a more secure, illiberal world free from the tradition-crushing rush of globalization, multiculturalism, and women’s and gay rights.

Russia’s neoconservative, retrogressive influence on US policy was no better illustrated than in the recent sweep of harsh legislative reforms that discriminate against the LGBT community and women. On April 12, Trump’s transgender military ban took effect. Since January, a dozen states have drafted bills to restrict abortion. Several states are pushing to enact a Heartbeat bill, outlawing abortion measures once a fetal heartbeat can be detected, which is as early as six weeks gestation — before most women even know they’re pregnant. Texas pro-life lawmakers are considering a bill to criminalize abortion as a homicide, where women could actually receive the death penalty.

Department of Education Secretary Betsy DeVos, whose own Michigan charter school failures have public school advocates worried, suggested cutting $17.6 million from the Special Olympics, which was ultimately disavowed by Trump. She defended $200 million in cuts to literary funding, but managed to scrape up $60 million to put toward charter schools. Charter schools take away precious resources from public education programs, including those designated for special-needs students. Private schools can continue to discriminate against LGBT students, as they are no longer legally required to adhere to Obama-era protections. And because charter schools can manipulate IRS loopholes, they are not obligated to abide by the same financial oversight standards as public schools. Federal charter grants have increased by more than 30 percent under the Trump Administration, while Department of Education budgets continue to be slashed. Republican lawmakers and members of the Congressional School Choice Caucus lobbied on Capitol Hillin January. Conservative lawmakers in South Dakota recently passed a bill granting homeschool students equal access to state scholarship programs.

Russia has cornered the American homeschool lobby, and uses propaganda scare tactics aimed at destroying public schools. Russia’s IRA Troll Farm helped propagate the anti-vaccine conspiracy theories, which has led to worldwide medical epidemics. As of April 25, the US had confirmed 695 cases of measles, yet 47 states currently permit religious exemptions from vaccines.

Russia’s long history of courting US politicians dates back to the Reagan era — Jerry Falwell’s Moral Majority, James Dobson’s Focus on the Family, and Pat Robertson’s Christian Coalition. But so-called family values nonprofit organizations have dramatically proliferated under the Trump administration, fueled by right-wing radio and cable news. Last November, Liberty University President Jerry Falwell Jr., who advised Trump to forge stronger ties with Russia, helped produce a film titled The Trump Prophecy that claims the president has been anointed by God. One in four Fox News viewers believe Falwell’s notion, according to a recent poll.

Last month, evangelical leader Franklin Graham traveled to Moscow for a “sit down” with Russian Duma speaker Vyacheslav Volodin, who has been sanctioned by the US since 2014for his involvement in Ukraine. Graham told Russian media that Vice President Mike Pence had “signed off” on his Kremlin trip, and that he and Volodin had discussed developing stronger ties with members of US Congress.

Special counsel Robert Mueller’s long-anticipated Report on the Investigation into Russian Interference in the 2016 Election was released to the public on April 18. Trump-appointed Attorney General William Barr purposely distorted the special counsel’s findings weeks earlier in his four-page summary addressed to ranking members of the Senate Judiciary Committee, and again whitewashed damning details of Mueller’s findings during this past Monday’s live press conference. As a result, Americans are even more politically divided over the president’s involvement with Russia and whether he obstructed justice. Mueller has essentially kicked the ball to Congress, and the mere mention of “impeachment” has become a political harbinger. Meanwhile, the president is vigorously fighting to prevent former White House Counsel Don McGahn from testifying, after House Judiciary Democrats issued a subpoena on Monday. Barr is scheduled to testify before Congress on May 1, and House Democrats have announced they plan to subpoena Robert Mueller to testify in public hearings.

Until these truths become evident, what remains terrifyingly certain is the Russians have no intention of not interfering in the next presidential election, which is just 17 months away. Nor has Trump attempted to stop them. In fact, Trump’s intimate relationship with Putin gives credence to Christian conservatives’ continued brazen collusion with sanctioned Russian nationals charged with war crimes. Until current tax laws are regulated, dark money will continue to fund special interest groups, while Russia remains the auspice of white-supremacist-inspired legislation.