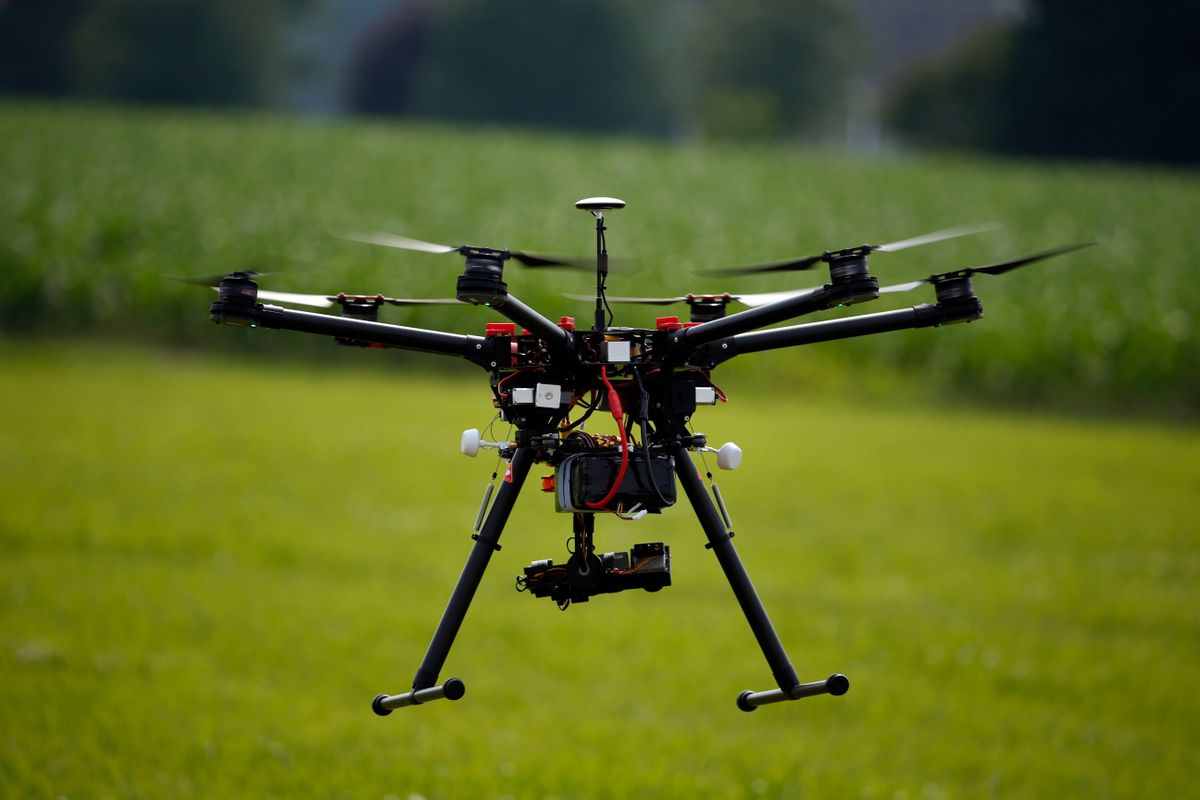 A hexacopter drone is flown during a drone demonstration at a farm and winery on potential use for board members of the National Corn Growers, Thursday, June 11, 2015 in Cordova, Md. Routine commercial use of small drones got a green light from the Obama administration June 21, 2016, after years of struggling to write regulations that would both protect public safety and unleash the economic potential and societal benefits of the new technology. (AP Photo/Alex Brandon) (AP)
--

The calls from Sen. Edward Markey (D-MA) and Sen. John Thune (R-SD) come as drone sightings are continuing to occur at major airports, causing flight diversions and delays due to the potential risk they pose to aircraft passengers and crew.

The pair wrote in a letter: "Remote identification will enhance safety, security, and privacy, and serve as a critical tool for law enforcement to respond to and address reports of illegal and unauthorized drone operations."

In recent months, the sightings of UAS (unmanned aircraft systems, also known as drones) has caused major disruption at large airports in the U.S. and UK. Most notably, the runway at London Gatwick Airport was closed for two days in late-December 2018, due to claimed drone sightings, affecting 140,000 passengers on 1,000 flights. No one was ever charged with the incident.

Reported drone sightings have also affected London Heathrow Airport and Newark Liberty International Airport in New Jersey. A drone sighting was also reported again at Gatwick on April 28, the day of the senators' letter, causing three flights to be diverted.

The July 3018 deadline was pushed back by the FAA in March 2019 to July 21. Once in place, the rules should allow law enforcement to remotely identify the drone and who it belongs to, potentially while it is still in the sky. That way, it is much more likely that the pilot will be identified (potentially via the known home address of the owner) and charged if their flying was deemed to be illegal.

Citing safety concerns over illegal drone flying, the senators explain: "Remote identification is not only a critical tool for safety, security and privacy, but will also serve as the linchpin for additional rulemakings, including the recently published NPRM [notice of proposed rulemaking] for commercial small UAS operations over people."

This outlines the rules which drone pilots must follow when flying their aircraft over groups of people. For example, while recording footage of a sports event or concert, or when used by law enforcement to help monitor crowds at an outdoor event, such as a march or protest.

But the forming of these rules cannot move forward until rules for remote identification of drones and their owners or pilots are in place. "Remote identification is also essential to the development of an unmanned aircraft traffic management system, which is imperative to achieve the safe and efficient integration of UAS operations in the airspace," the senators' letter to the FAA continues.

Such rule-making will initially give law enforcement the means of identifying, arresting and eventually sentencing drone pilots who enter no-fly zones, such as around airports. But, later down the line, it is hoped that such policy will enable drone-based delivery services to take off, like those currently being developed by Amazon and Alphabet, parent of Google.