Smart Watch: Netflix's "Dead to Me" goes down easy, if you don't think about it too much 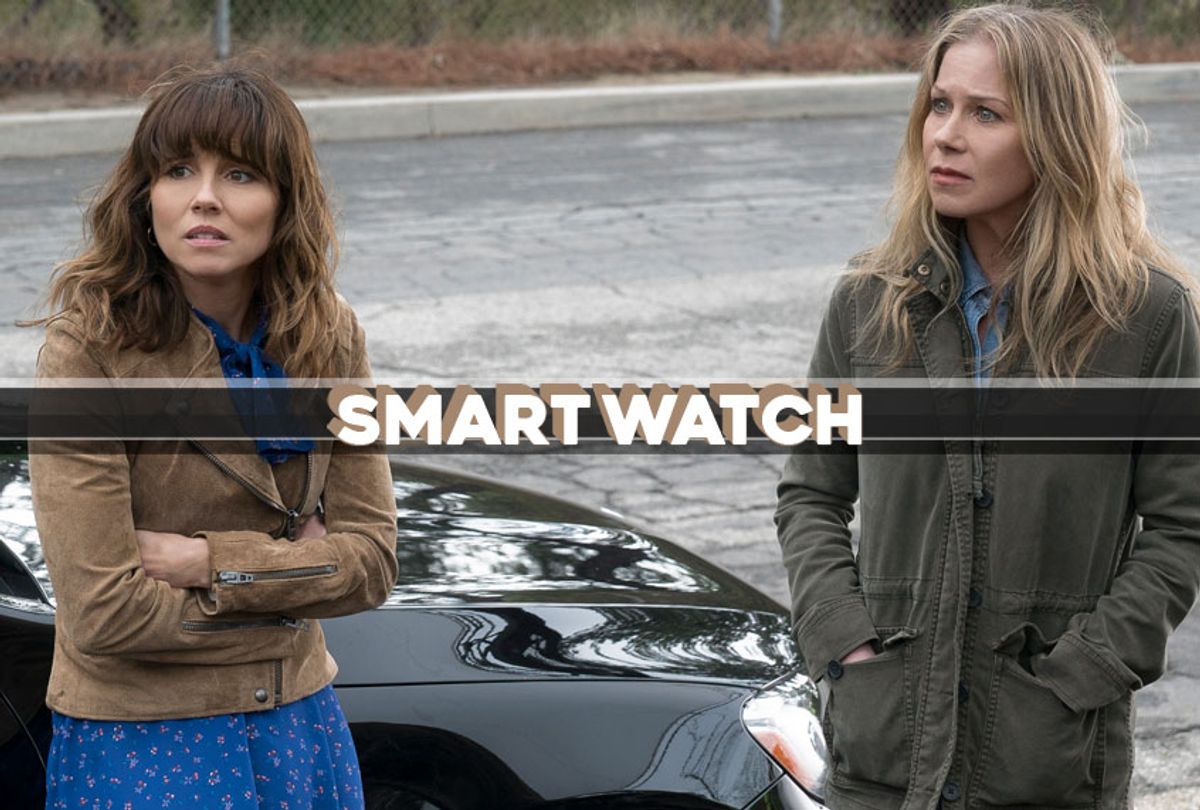 Linda Cardellini and Christina Applegate in "Dead to Me" (Netflix)
--

"Dead to Me," streaming on Netflix

Grief makes us illogical. We say things to the grieving that hold no weight and make no sense, and in grieving ourselves we act strangely. In one moment we don't feel like doing anything at all, or anything substantial. In the next we're suddenly compelled to dance. Who knows why.

This sums up the contradictory nature of "Dead to Me," a breezy, shallow comedy about an angry, grieving woman searching for her husband's killer and the friend she makes along the way. Across its ten half-hour episodes creator Liz Feldman connects one watchable moment on top of another, hanging everything together curiously, if not altogether successfully.

It helps that the series is constructed around a pair of brilliant performances by Christina Applegate and Linda Cardellini, playing a pair newly widowed women who meet at a grief group and hit it off more or less instantly. Such a set-up sounds like the beginning of long-running TV sitcom interspersed with dollops of tenderness, vulnerability and a few gutting frames of crying jags on toilets and in beds.

"Dead to Me" does contain a few of those, except it aspires to construct a mystery as well. This is where it stumbles.

From its first moments Applegate's brittle real estate agent Jen is mired in rage over the unfathomable concept that someone ran down her husband and drove off, leaving him to die.

Mourning makes Jen a scornful, jagged creature with a caustic sense of humor who meets her opposite in Cardellini's Judy, who is sweet and weird in all the right ways and maybe just a little too eager to please, and whose fiancé also died suddenly of a massive heart attack. Judy is mending, but Jen desires some form of justice, and sets out to find the person who killed her spouse.

The less one knows about "Dead to Me," the more effective the cascade of twists linking each episode will be, except you can probably take a good guess as to where the series is headed by the end of the first episode. Again, this is in no way meant to fire up the brain's synapses with deep thoughts and theories.

But this is where that notion of contradictory value comes into play, because "Dead to Me" is easily consumable. The comedic situations feel wafer-thin, and we're not quite sure why Applegate suddenly bursts out into a jazz dance sequence, although good lord, she's got moves and is fun to watch.

See what I mean? Isn't packaging treats as crispier and thinner the secret to gulping down mass quantities with less guilt? Yes it is. And isn't there room for ephemeral pleasures, whether you're emotionally compromised or simply exhausted? Certainly.

This is also very much a Netflix show, programmed and populated with name-brand stars either killing each second in front of the camera, as Applegate and Cardellini do, or at least charming the pants off of us, as Ed Asner and James Marsden do when they pop up later for reasons I won't go into because — like I said — twists.

What "Dead to Me" does well is root Jen's and Judy's developing bond in a shared sense that their situation is bewildering and weird and they are reacting accordingly. As their separate and shared situations grow stranger by the minute, the viewer is left to contemplate the ways we commonly write off women as nuts, unbalanced and brittle, whereas men in similar situations would have their bursts of strange behavior excused, owing to their sorrow.

As "Dead to Me" is presented, however, one can take each frame like face cards in a deck that shuffles well but is missing something, that's playable as long as you overlook the fact that it's short an ace or two.  Which is quite lovely if you just want to be distracted by a series of satisfactions. Given the right circumstances — or even the worst circumstances a person can be in — a show like this could be exactly what a person needs.

Another hard truth about series that deal with death is that they tend to be difficult to watch. Extremely difficult. Sometimes we understand that from the start and nevertheless, the horror creeps up on you.

"Chernobyl" lays out the opening moments and subsequent attempt to cover up the 1986 explosion at the infamous Ukrainian power plant that sent radioactive material blowing through what was then the Soviet Union, western Europe and as far away as Scandinavia.

For those who remember it, the catastrophe was a manifestation of everyone's worst nightmares. Once enough time passed, Chernobyl became shorthand for any disaster, even a child's tantrums. Distancing oneself from unimaginable tragedy is simple enough when one lives far away.

In this miniseries, writer Craig Mazin and director Johan Renck place the viewer in the middle of it, starting at the moment of the explosion itself. The truly horrifying scenes, however, show people gathered on a bridge nearby, staring at the pillar of light splitting the sky above the plant as their children play in radioactive ash falling like snowflakes from the sky. This happens in the first episode of a five-part miniseries, and in that moment we know that most if not all of these folks are condemned to die.

So if the name doesn't let you know what you're signing up for, the quiet depictions of these mundane tragedies surely will. As a warning, the majority of scenes showcasing human beings peeling apart don't kick off in earnest until the third installment.

The shocking realism with which these agonizing deaths are depicted only makes the dramatization of the government's brazen peddling of disinformation even more aggravating, particularly as Stellan Skarsgård's Soviet Deputy Prime Minister Boris Shcherbina initially likens the severity of the radiation a chest X-ray.

One cannot commit to watching "Chernobyl" without understanding how tough this viewing experience is. At the same time, the performances turned in by Skarsgård, Emily Watson and Jared Harris are passionate and nuanced enough to compel the tough viewers to gut out the squeamish parts. And this story is vital enough to make one hope the world has a lot of tough viewers.

I'm guessing the main point of confusion, albeit explainable, is the choice to make Harris, who portrays nuclear physicist and thwarted whistleblower Valery Legasov, as well as Watson (playing another physicist) and Skarsgård, portray their roles without using Russian accents. Perhaps the reasoning was to prevent distraction, but the British accents (and whatever Skarsgård is doing) is distracting once the brain processes the fact that these English actors are playing Soviet figures.

Relatively speaking, this is a minor quibble about a series that does its best to condense the retelling of a massive disaster into a format people can connect with. Beneath the gore and despair, "Chernobyl" is a lesson in arrogance and willful ignorance.

When confronted by the truth delivered by knowledgeable scientists, politicians too invested in maintaining power and its trappings dismiss the threat, more concerned about appearances than hundreds of thousands of lives. And in watching those scenes, one can only hope we never witness a sequel to this in our lifetimes.

The good news is, not as many favorite characters died as we presumed would in "The Long Night." The bad news is a lot of people died, and Cersei is just sitting there in King's Landing, sipping her purple drank, grinning and laughing as she waits to mop up the leftovers. Anyway, at this point anything can happen, including nothing at all. Three episodes left!