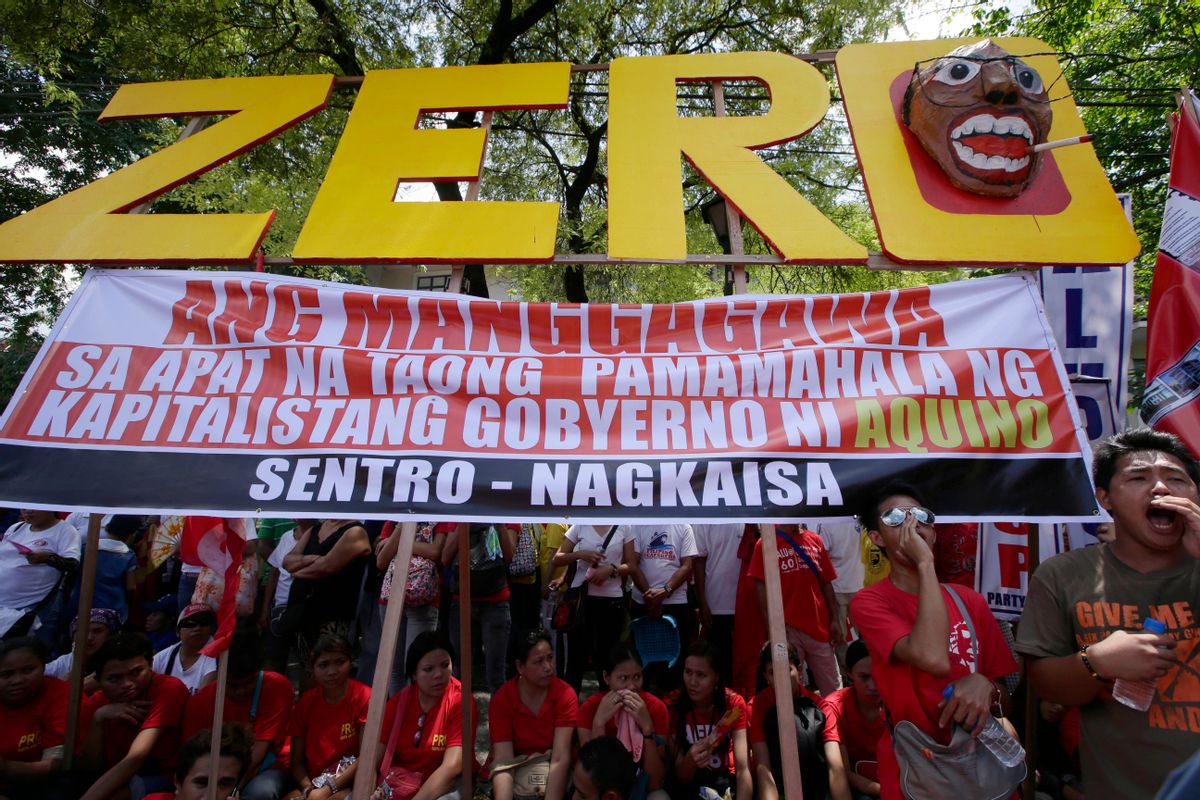 Workers shout slogans as they hold a rally near the Presidential Palace to mark the Labor Day celebrations on Thursday, May 1, 2014 in Manila, Philippines. Various labor groups nationwide held protests, mostly to demand wage hikes, better working conditions and an end to corruption in the government. The sign reads: Workers Have Zero Benefits In The Four Years of Capitalist Government of Aquino. (AP Photo/Bullit Marquez) (Bullit Marquez)
--

May 1 has an energy that is palpable across the globe. On this day, every year for more than a century, workers across the world gather for International Workers Day, also known as May Day. These marches have inspired everyone from retired mechanics to immigrant fast food workers to high school students to take the streets in honor of labor — and in a show of respect for the power of a strike. Amid the Trump administration's egregious assaults on the lives of workers and immigrants, showing up for a day that asserts the dignity of workers from all backgrounds is more important than ever.

“May Day serves as a reminder to all working people around the world that we are facing a common struggle, and that we are still the majority,” Joel Faypon, a member of United Electrical, Radio and Machine Workers of America (UE) Local 1008, tells In These Times. “And that we still have the power to drive world politics to a direction that would best serve us.”

The history of May Day

May Day was born in Chicago in 1886. During the late 19th century, workers, tired of 10- to 16-hour days and little pay, began to organize along socialist and anarchist principles. Whether in formal unions, political parties or cultural groups, working-class people in the United States were motivated by their dismal conditions and the hope they found in anti-capitalist ideas. With discussion about unfair working conditions spreading like a fever, the 1884 convention of the Federation of Organized Trades and Labor Unions (FOTLU) concluded with a declaration that "eight hours shall constitute a legal day's labor from and after May 1, 1886." Both the FOTLU and the Knights of Labor would support strikes and demonstrations to achieve it.

In a history of the events leading up to the first May Day, Industrial Workers of the World member Eric Chase notes that between 1884 and 1886, “an estimated quarter million workers in the Chicago area became directly involved in the crusade to implement the eight-hour work day.”

When May 1 finally arrived, 40,000 workers went on strike in Chicago, and over 300,000 workers across the United States walked off their jobs. For two days, rallies and demonstrations ensued without violence, but on May 3, police attacked and killed picketing workers at the McCormick Reaper Works Plant. Labor leaders called for a public meeting to protest the deaths, set for the evening of May 4 in Haymarket Square. The events that ensued at Haymarket are fuzzy: A chaotic scene of protesters and police became the site of a bomb explosion (whose source has never been proven), followed by gunshots. When things were quiet, the scene left nearly a dozen dead (the exact numbers are disputed, but the Illinois Labor History Society statesthat seven policeman and four workers were killed).

Despite having no hard evidence on their side, the police placed blame on eight people they believed to be anarchists: Albert Parsons, August Spies, Samuel Fielden, Oscar Neebe, Michael Schwab, George Engel, Adolph Fischer and Louis Lingg. These charges were rooted in not only anti-anarchist and communist sentiment of the time, but also deeply-entrenched xenophobia. Much of the labor force was made up of immigrants, and so anarchists, communists, immigrants and workers became easy scapegoats.

Six of the eight defendants were immigrants, and seven of the eight men were found guilty and sentenced to death. Two of the men’s sentences were changed to life in prison, one was exonerated and five remained to be hanged. Louis Lingg was found dead in his jail cell before the execution. And so, on November 11, 1887, Adolph Fischer, George Engel, Albert Parsons and August Spies were hanged. May Day celebrations are meant to honor the lives of these people and the movements from which they emerged.

A Day of Action for immigrants, queers and workers

Armando Robles, the President of UE Local 1110 who was part of the historic Republic Windows and Doors occupation, centers this history as a reason to keep honoring May Day. “People sacrificed their lives fighting for eight hours,” he explains, “and in Chicago and around the world, this day means something important because of that.”

Just like in the late 1800s, Robles argues, “we have to fight a lot of battles all over the country with this administration’s policies against immigrants. So, we have to not only celebrate and march, but also hold workshops, meetings and tell the government we are not in favor of this treatment.”

In 2006, labor movement and immigrant justice leaders worked to center immigrant labor in that year’s May Day marches. In the face of the Sensenbrenner bill — a federal bill introduced in 2005 which would have criminalized assistance to undocumented immigrants who were seeking food, housing or medical services—May Day organizers proclaimed the march “A Day Without Immigrants.”  The bill passed in the House but failed in the Senate, thanks in part to mass resistance. Still, comprehensive immigration reform has yet to be upheld, and the connection between and overlap among immigrants and workers continues to be an integral theme of May Day rallies.

Today, with the Trump administration's constant assault on immigrants, May Day’s commitment to uphold the value and dignity of immigrants is vital. Maximillian Alvarez is a graduate student at the University of Michigan, a member of the Graduate Employees’ Organization (American Federation of Teachers Local 3550), and the son of an immigrant worker from Mexico. He tells In These Times, “People understand that the easy way out is to blame immigrants—to punch down and find some other desperate group of people to kick off the life raft, without doing the harder task of understanding the mechanisms of global capitalism are ultimately the reason they will never achieve the sustainable happiness they were promised as hardworking people. And I think this speaks to the imperative of May Day, the spirit of international worker solidarity. It’s a spirit of solidarity that fundamentally understands that capital wins by dividing us, and by pitting us against each other.”

Similarly, queer workers — including queer, immigrant workers — are in a particularly precarious time in the United States, with right-wing policy makers working to roll back existing protections and to prevent new protections from being enacted. There are no explicit and consistent federal protections for LGBTQ workers, and existing protections provided through the Equal Employment Opportunity Commission and judicial interpretation are on their way to the Supreme Court, where they may be overturned by next summer. This makes union contracts an incredible asset to queer workers, who can fight for healthcare, job protection and partner benefits through contract negotiations.

Be Marston, a shop steward for UNITE HERE Local 8 in Portland, Oregon, says she shows up to May Day mobilizations to help remind people that queer and trans workers are fighting economic injustice alongside their fight against trans and homophobic treatment. “Being a member of the LGBTQ+ community, I want to show everyone we are in this fight," Marston notes. "May Day is a day when we all pull out of our trenches and remind ourselves of the great power we have when we all come together.”

Kris Brown, a union worker with the Inlandboatman's Union in San Francisco echoes that May Day is more than just a celebratory march. “Labor Day in the U.S. is a day of rest for those workers who are fortunate enough to have holidays off, and May Day is a day of action,” he says.

May Day organizers plan more than marches. The Worker Solidarity Network has proposed that May 1 should mark the start of global "solidarity days," which would involve “actions in the streets, organizing at workplaces, and building assemblies of workers.” Similarly, the Boston May Day Coalition has meetings year-round and is active in organizing and supporting immigrant justice actions.

Around the globe, trade unions and other worker justice groups plan marches and other events in honor of the Haymarket martyrs, as well as various labor actions and strikes in their respective countries. The Yellow Vests, a complex economic justice movement that began in France in November of 2018, will spend its first May Day in the streets, re-asserting demands for fair wages and higher taxes on the rich. In Cuba, which is home to some of the largest May Day demonstrations in the world, workers and students take the streets in support socialism and against harsh U.S. blockades. South Africa has long celebrated International Workers Day, and in 1950, the Communist Party of South Africa (CPSA) called for a May Day strike in support of workers and in opposition to the apartheid government. That strike ended in state-sanctioned violence, leaving 18 dead. Every May Day since has in part honored the lives lost in the struggle for worker justice and self-determination.

May Day is also a strike. Most marches ask us to walk off work, in honor of the 1886 history, and as a reminder of the necessity of keeping this labor tactic alive. Author and organizer Jane McAlevey explains in her book No Shortcuts that, particularly now, we can’t count on courts or politicians to protect workers. Instead, we must fight and build power in the “the economic arena” in order to transform society.

As Trump administration attacks on workers get worse, the U.S. has seen a dramatic increase in the number of strikes: teachers in West Virginia, Arizona, Oklahoma, Colorado, North Carolina and California; nurses in Vermont; Marriott Hotel workersin various locations; food service workers at Harvard and Tufts; and the recent 11-day Stop and Shop strike in New England. In all of these cases, the powerful act of ceasing work resulted in wins for workers that they hadn’t been able to obtain through other means. The strike reminds us all that it is workers who create wealth, who have the power, and who deserve fair contracts.

Jessica Salfia is a member of the West Virginia teachers union, and was a key player in the 2018 strike that resulted in a 5% pay increase. For her and her fellow teachers, the strike was a tool they knew they had to use for their and their student’s survival. Salfia explains that after years of workplace setbacks—slashed salaries, increased class sizes and the loss of classroom resources—the teachers knew they had to take serious action. “For me, it was death by a thousand cuts," says Salfia. "And when they said we were gonna have to deal with bad health care and a pay cut, teacher’s said this time, ‘no, this is it, we’ve had enough.’”

Danielle Manning, a public school teacher and co-chair of United Teachers Los Angeles, says that history played an important role in her union’s ability to go on strike in January of 2019.  “A few of our teachers were on strike in the ‘89 strike. And knowing the history of striking—that it’s possible—is important.”

Joe Jarmie, a member of United Food and Commercial Workers Local 371, also went on strike this year, walking off his job as a meat cutter at Stop and Shop where he’s been working for 33 years. Joe says the solidarity from other unions and the community helped keep their spirits up during the 11-day negotiations.

“We got overwhelming support from unions and the community. The first day we had boxes of 15 pizzas, 10 cases of water, 30 dozen donuts, 70 boxes of coffee," he said, adding, "I kept track, I wanted to make sure who I should send thank you notes to. So if that’s not community support, I don’t know what is."