Jim Comey has it wrong: Trump is a monster, all right — but the GOP created him

Trump may "eat your soul in small bites," but he's also serving the GOP's long-term agenda on taxes and judges 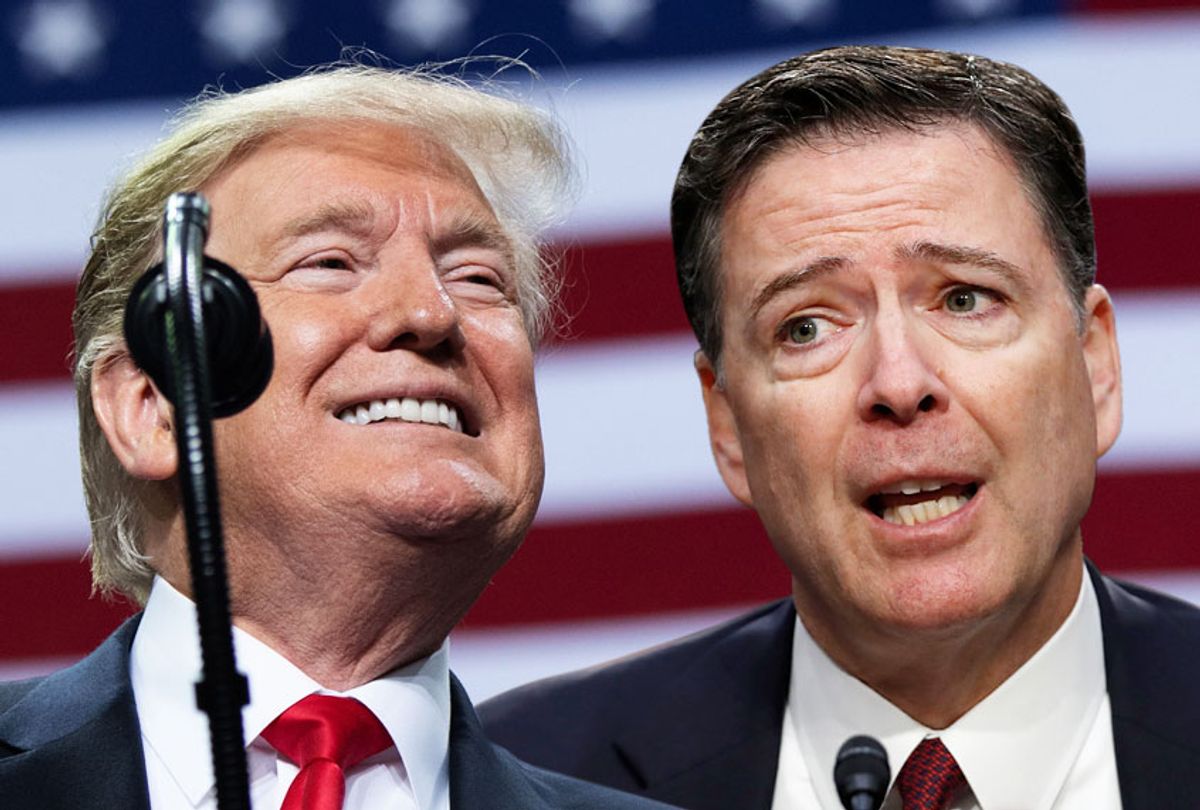 Former FBI Director James Comey wrote a provocative op-ed for the New York Times last week in which he describes what it's like to have Donald Trump try to "eat your soul in small bites." He says that Trump has a way of overwhelming people's better angels and robbing them of integrity over time, until they either find the energy to get away or become a full-fledged Trump sycophant.

It has the ring of truth. One suspects that there are more than a few people in Trump's orbit who were originally appalled by his behavior but adapted over time and are now in a sort of cult-like state of obedience, without minds of their own. Once you make enough moral and ethical compromises, it becomes necessary to convince yourself that you are doing the right thing if you want to look yourself in the mirror every morning.

Comey says that Attorney General William Barr and Deputy Attorney General Rod Rosenstein are among those people,  contrasting them with former Defense Secretary Jim Mattis, who has the distinction of being the only former senior administration official who resigned as a matter of principle. It is so rare that Trump didn't even realize what was happening until the news media informed him that Mattis' resignation letter was a rebuke.

In Comey's reckoning, this is all about Trump's preternatural ability to get people to do things they wouldn't ordinarily do. Like all good con artists, Trump does have a talent for drawing people into his scam. But I'm skeptical that more than a handful of the Republicans in the current administration have been so co-opted. There's more to it than that.

According to Josh Marshall at Talking Points Memo, this is really about the entire party being radicalized by Fox News propaganda over the past 25 years, and that includes members of the elite establishment like Barr. I think that's right. It's quite clear that the flamboyant extremism of the modern right-wing media machine invented by the likes of talk radio's Rush Limbaugh and Fox News' Roger Ailes has become the mainstream of conservative thought. Barr is steeped in it, as he showed even before he became Trump's attorney general, when he told the New York Times that the bogus fever-swamp scandal about Hillary Clinton's supposed involvement with the Uranium One deal was more worthy of investigation than Russian interference in the 2016 election.

But that's not the whole story either.  Republicans aren't having their souls gobbled up by this devious con man. They have plans of their own.

Back in 2012, Grover Norquist laid it all it plainly:

Trump is a pain in the neck, to be sure. He causes lots of unnecessary drama and almost certainly embarrasses these Republicans on occasion. And I'm sure there are some who worry that this whole thing could get out of hand. But what they have in Trump is a man with (small) working digits who is handling a pen and accomplishing some of the most important items on their wish list.

Yes, Republicans were unable to repeal Obamacare. But think about it: That only happened because one senator, face to face with his mortality, stopped them. Otherwise, they had it in the bag. They got their tax cuts and their military buildup. They have taken a wrecking ball to the regulatory state. They've torn up the Iran nuclear deal and the Paris climate agreement. They've packed the courts with far-right judges, and as former White House counsel Don McGahn proudly told Senate GOP staffers, those judges "will spend 30–40 years unwinding the power of executive agencies." McGahn may end up being an instrument of Trump's eventual downfall, but he had a bigger job to do and he took care of that first.

Bill Barr has a job to do as well, and it's not just following the fever dreams of Sean Hannity and Jeanine Pirro. As Charlie Sykes points out in this piece, Barr is a professional protector of presidential power, going back to his first stint as attorney general in George H.W. Bush's Department of Justice. He refused to name an independent counsel to investigate "Iraqgate" instead taking it on himself and then stalling until the independent counsel statute ran out. He encouraged Bush to pardon everyone indicted in the Iran-Contra affair.

Barr was obviously chosen for that particular experience and expertise, but also because he is a true believer in the right-wing philosophy of the "unitary executive." This Politico profile makes clear how the Republican establishment sees Barr:

“Barr is the closest thing we have to [Dick] Cheney,” said Chuck Cooper, a conservative litigator and Barr ally who, like the attorney general, has led the Justice Department’s Office of Legal Counsel. “He’s a man. He has a very strong sense of purpose and confidence.”

Barr is part of an influential group of right-wing lawyers and politicians who all came up together in the 1980s and believe in unfettered presidential power. Cheney is another. Just as McGahn saw the opportunity to pack the judiciary with like-minded judges, Barr's mission is to push the envelope on presidential power and create judicial precedents to cement it in place. If he has to put up with Trump's antics, so be it. He provides Republican thought-leaders with an opportunity to achieve their long-term goals. In a way, having someone like Trump in power, completely ignorant on how the system is designed to work, serves them better than an ordinary politician. He literally has no idea what they're up to, and wouldn't care about it if he did.

You may ask why they would want to allow Democratic presidents to wield the same powers when they're in office. I think they simply believe that Democrats don't have the guts to take it to the limit because they're too caught up in their own self-image as believers in "good government." And since Republicans no longer respond to charges of hypocrisy, they would unleash hell on any Democrat who attempted to use the powers of the presidency the way Trump is currently doing. Republicans believe they alone will use the power of the presidency to maximum effect. They're probably right.

So sure, craven politicians like Sen. Lindsey Graham, R-S.C., who needs to run for re-election in a state filled with Trump worshippers, are just playing old-fashioned politics. Others no doubt actually think that Trump is a great president and just want to be part of making America great again. Fox News brain rot is a real phenomenon. And there are more than a few who are simply in it to feather their own nests. The Trump era is a sewer of corruption.

But it's pretty clear that many of the people in this administration are anything but co-opted by Trump's magical soul-eating powers. It's the other way around.  Donald Trump may or may not be Putin's puppet but he's definitely the Republican establishment's useful idiot.