As Uber and Lyft drivers strike, workers share stories of struggling to survive on low wages

In ten U.S. cities, hundreds of drivers turned off their apps. 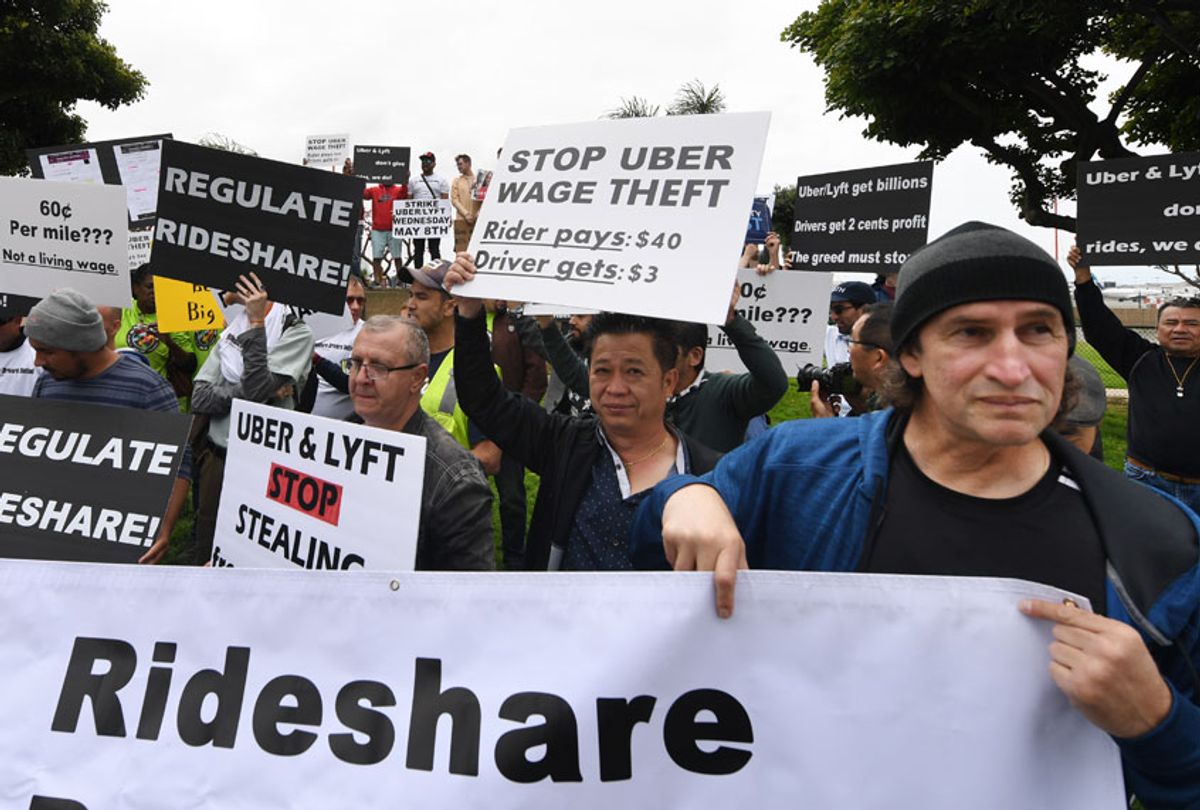 Rideshare drivers for Uber and Lyft stage a strike and protest at the LAX International Airport, over what they say are unfair wages in Los Angeles, California on May 8, 2019. (Getty/Mark Ralston)
--

Today, Uber and Lyft drivers in 10 cities across the country turned off their apps to protest their exploitation at the hands of their billionaire overlords, and asked customers to do the same. The one-day solidarity strike was meant to align with Uber’s much-anticipated initial public offering that is expected to be announced this week. (Lyft previously went public in late March.)

The U.S. cities where drivers protested included New York, Washington, Chicago, Los Angeles, and San Francisco, where protesters waved signs in front of Uber's headquarters in San Francisco's Civic Center neighborhood. In the United Kingdom, drivers in London, Birmingham, Nottingham and Glasgow, who belong to an independent workers’ union, also protested, as did those in Melbourne in front of Uber’s Australian headquarters. Drivers recalled a laundry list of grievances such as dwindling wages, lack of job security, and lack of benefits.

In Philadelphia, the Philadelphia Drivers Union said in a statement that legislators should be held accountable for how they have let Silicon Valley companies exploit Pennsylvania drivers with predatory car loans and declining wages. Their statement read:

When unregulated Uber services launched in 2013 it was heralded as an innovative solution to many cities’ transportation problems. Nowhere was this felt more deeply than in the large city with the highest rates of deep poverty, Philadelphia, where concerns over lack of safety or worker protections and increased privatization of essential services were ignored in the interest of cheap transportation in underserved neighborhoods. But Pennsylvania regulators and legislators may finally be open to accountability for allowing a Bay Area tech start-up to become so embedded in our state’s transportation system. With virtually no requirement for transparency (see: PA Title 57A18) and a promise of increased driver exploitation from Uber, it has become more difficult to ignore thousands of constituents across the state who are stuck with predatory leases and decreased wages.

Drive United in Washington D.C., a grassroots, independent, driver-run organization dedicated to empowering drivers to make a living through rideshare apps, said in a media statement that the protest is also about the tech millionaires making a profit off the exploitation of the working class.

“Today’s action is about clearly stating that drivers’ livelihoods should not be dependent on the whims of tech CEOs,” Stan De La Cruz, a founding member of Drive United who has been driving for Lyft and Uber for over three years, said. “We deserve to be safe on the job, we deserve healthcare, and we deserve to earn a living wage."

Sinakhone Keodara, a Lyft driver who has faced housing insecurity in Los Angeles, said in a media statement that wages for Lyft drivers need to be raised, noting how some drivers are homeless.

“Mayor Eric Garcetti rang the bell for Lyft’s IPO just days after our strike, calling them a socially responsible company,” Keodara said. “But creating an underclass of homeless drivers as collateral damage is anything but responsible. Driving for Lyft pays below minimum wage. We need a minimum per hour rate to compensate for the fact that we sometimes miss out on the bonuses.”

In San Francisco, an estimated 300 protesters rallied in front of Uber’s corporate headquarters starting around noon, spilling into the street. Drivers who are protesting are expected to keep their apps off until midnight.

Coverage around the protest has painted an indifferent picture. The New York Times described the turnout as “muted.” Though the topic #UberLyftStrike was trending on Twitter today — with over 25,000 tweets using the hashtag — it was unclear as of mid-day the extent to which drivers and riders were participating, and whether either company would feel the financial sting.

In any case, Uber is anticipating driver satisfaction will continue to be a problem for the company. In its recent S-1 filing, the company stated: “While we aim to provide an earnings opportunity comparable to that available in retail, wholesale, or restaurant services or other similar work, we continue to experience dissatisfaction with our platform from a significant number of Drivers. In particular, as we aim to reduce Driver incentives to improve our financial performance, we expect Driver dissatisfaction will generally increase.”