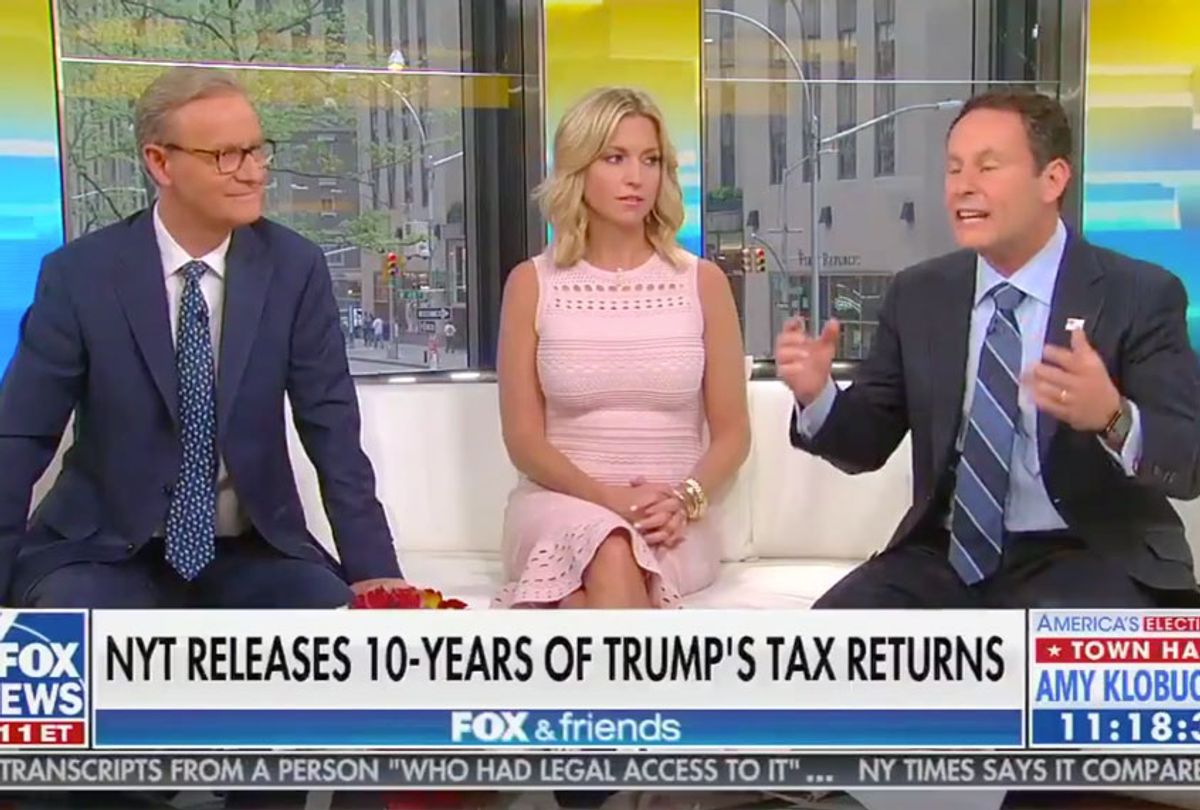 The hosts of "Fox & Friends" appeared to not only defend but celebrate President Donald Trump on Wednesday in the wake of a bombshell report that revealed his businesses lost nearly $1.2 billion between 1984 and 1994.

Co-host Brian Kilmeade said Trump "lost a lot of money over the course of 10 years, if you consider a billion dollars a lot of money" and from that concluded that the president was a "bold businessman." He then insisted there was "nothing about this article that should surprise anybody."

That article, published Tuesday night by The New York Times, revealed the former real estate mogul appears to have lost more money than nearly any other individual U.S. taxpayer year after year over the decade after comparing his information with other top earners.

Trump lost so much money that he was able to avoid paying income taxes for eight of the 10 years, according to the newspaper. The only two years in the 10-year period when he paid income taxes were 1987 and 1988. In both of those years, he paid the alternative minimum tax, which was designed to keep wealthy taxpayers from using loopholes and deductions to avoid paying taxes. It is unclear if the IRS required Trump to make changes after audits.

The newspaper's report is striking given Trump ran for president as a self-made billionaire and real estate tycoon of unfathomable success, claiming "I built what I built myself, and I did it by working long hours and working hard and working smart."

Kilmeade attempted to shield Trump against this notion, saying, "I can't imagine having that much money, spending that much money and being in debt. For him, it makes sense . . . For Donald Trump, he says, 'I got some money, but I want to really expand my empire. I want to take chances.' That's what he has done through his entire life."

He then listed several properties that Trump has purchased over the years and asked, "What do you people not understand about that he's a little bit different than most people?"

Co-host Ainsley Earhardt echoed Kilmeade's comments, calling The Times report "interesting" but insisting that it won't sway voters at the polls as few can "fathom that kind of money."

She remarked, "Wow, it's pretty impressive — all the things he's done in his life. It's beyond what most of us could ever achieve."

Co-host Steve Doocy then chimed in to point out that the report does not indicate Trump broke the law.

"I think the suggestion is simply that he used the tax laws to his benefit," Doocy said.

Former Speaker of the House-turned-conservative-commentator Newt Gingrich later appeared on "Fox & Friends," where he argued the Times' report was "actually an argument for the Trump tax cuts."

Fox News contributor Marc Thiessen on Tuesday said the biggest takeaway from the Times' report was that it made clear Trump does not want his taxes released, "because they're going to show he's not as rich as he says he is . .. Donald Trump has the best accountants in the world. They're going to organize his finances in a way to minimize his income."

Sean Hannity, a host at the conservative network and an informal adviser to the president, on Tuesday night called the Trump Organization "an overwhelming American success story." He said "obsessive hysteria" over Trump's tax documents "reveal nothing new and absolutely nothing illegal."

Trump on Wednesday called the report a "hit job" based on "very old information."

"Real estate developers in the 1980's & 1990's, more than 30 years ago, were entitled to massive write offs and depreciation which would, if one was actively building, show losses and tax losses in almost all cases. Much was non monetary. Sometimes considered 'tax shelter,' ......," he wrote on Twitter.

In another tweet, he added, "...you would get it by building, or even buying. You always wanted to show losses for tax purposes....almost all real estate developers did - and often re-negotiate with banks, it was sport. Additionally, the very old information put out is a highly inaccurate Fake News hit job!"