My father recorded young Bob Dylan: How the historic "Minneapolis Party Tape" was made

If you don’t know it’s Dylan, my dad told me later, you'd think it was someone pretending and doing a bad job 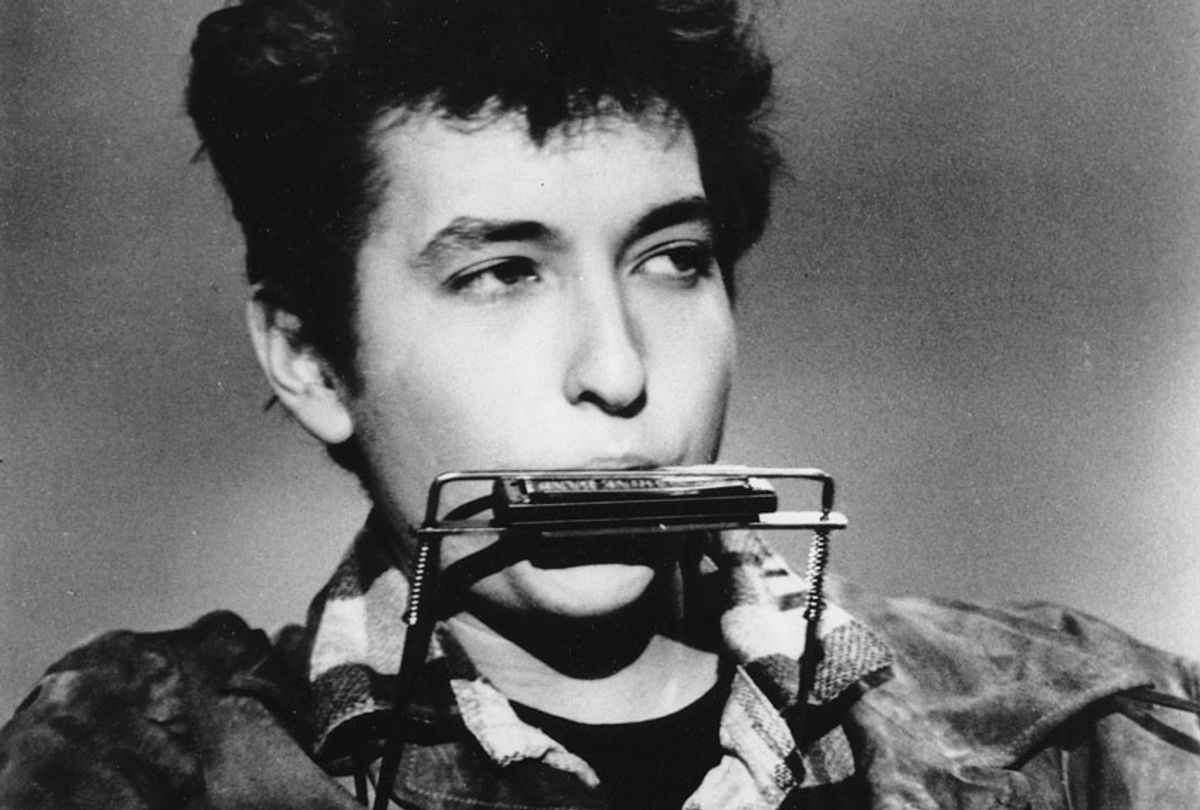 Bob Dylan plays the harmonica and acoustic guitar in March 1963 at an unknown location. (AP Photo)
--

Excerpted from "Under Purple Skies: The Minneapolis Anthology," edited by Frank Bures (Belt Publishing, 2019). Reprinted with permission from Belt Publishing.

In the summer of 1960, my then fifteen-year-old father, Cleve Pettersen, went to Radio Shack and bought one of the first commercially available, portable reel-to-reel tape recorders. The thing was the size of a small ottoman and weighed about as much as a boulder of the same dimensions. It cost $50, which is over $400 in today's economy, so not an insignificant purchase for a fifteen-year-old.

My dad had befriended a precocious kid from his neighborhood, Bil Golfus, who had inserted himself into the Dinkytown coffeehouse music scene. He'd tagged along on a few of Golfus's outings, crossing paths with several musicians, including "Spider" John Koerner, Tony Glover, and the late Dave Ray, who banded together to release albums under the name "Koerner, Ray, and Glover."

Inspired by the field work of John and Alan Lomax, who traveled the South recording and preserving American folk music for the Library of Congress in the 1930s and 1940s (they famously installed a "state-of-the-art" 300-pound wire recorder in the trunk of their Ford sedan), Dad resolved to record some Dinkytown performers for posterity. Alas, none of the musicians in the scene felt inclined to indulge a fifteen-year-old aspiring archivist, with the exception of one—nineteen-year-old Bob Dylan.

The previous fall, Dylan had arrived in Minneapolis from the iron range, ostensibly to attend the University of Minnesota. By all accounts, he didn't get to class often, instead choosing to spend most of his time attached to his guitar. He first lived in an apartment overlooking the alley above Gray's Drugstore, on the corner of Fourteenth Avenue SE and Fourth Street in Dinkytown. He later moved a few blocks away to an unremarkable, two-story, multi-unit building with bay windows at 711 Fifteenth Avenue SE.

Apart from vacant university desk chairs, Dylan's time in Minneapolis was marked by honing his growing passion for folk and blues music and playing small gigs in coffee shops. After he'd morphed himself from Bobby Zimmerman to "Bob Dylan," but before he'd begun composing original music in earnest, he made a recording that was reverently known for decades as the Minneapolis Party Tape.

Dinkytown's folk performers were mostly interchangeable, performing the same songs with roughly the same delivery, my dad recalls. Among this crowd, Dylan wasn't considered to be one of the best, but the upside was he had a burning curiosity to hear what he sounded like while performing. Dylan wasn't his top choice, he was simply grateful college kids had agreed to briefly let him into their circle.

So, one afternoon my dad and Golfus lugged that beast of a tape recorder to Dylan's ground-floor apartment on Fifteenth Avenue SE (the asbestos-filled building was demolished in 2014), for a living room jam session. Also present at the "party" was girlfriend Bonnie Beecher (who would one day marry Grateful Dead/Woodstock character Wavy Gravy) and friend Cynthia Fisher.

Over the course of roughly two hours, as Bob, Bonnie, and Cynthia demolished a bottle of wine, they recorded twelve songs, about thirty-one minutes in total length. All the songs were covers by artists like Woody Guthrie and Jimmie Rodgers, including "Come See Jerusalem," "I Thought I Heard That Casey When She Blowed" and "I'm Gonna Walk the Streets of Glory." There's also a one-minute original song Bob wrote commemorating the laziness of his roommate, Hugh Brown.

Dylan wasn't Dylan yet. "If you don't know it's Dylan," my dad said decades later, "you think it's someone pretending to be Dylan and not doing a good job." However, being one of the first recordings he ever made, it's considered a landmark Dylan artifact, and serves as a small, priceless progress report on Dylan's musical development. He wouldn't make any professional quality recordings until two years later.

The recording is sometimes rough and tinny, though surprisingly clear at other times. Back-chat and ambient noise can be heard between some songs as well as a genial Dylan trading barbs with Cynthia during "Liberty Ship." Bob coughs quite a bit during and between songs. As the room peppers him with suggestions about what to sing next, Bob is tentative, oddly unsure about which songs will sound good on a recording.

Dylan frequently stopped so they could rewind and listen to what he'd just recorded, which is how they discovered that the first few songs suffered from poor sound quality due to table vibrations from the coffee table the microphone was sitting on. After that, Dad simply held the mic in front of Dylan for the remainder of the session, and the quality improved. When they'd finished, Dylan asked to rewind and listen to the entire recording one more time, then Dad and Golfus left. Dad never saw Dylan again.

By December of the same year, Dylan abandoned college and made his way to New York's Greenwich Village. Within the year, he had a contract with Columbia Records and his skyrocketing fame had begun.

For years, the Minneapolis Party Tape languished in obscurity. A few rough copies had been made, but most hardcore Dylanologists hadn't heard the seminal recording until 2005, when Dad donated the original tape to the Minnesota Historical Society. The tape isn't on display, but CD and cassette copies of the tape are available to be checked out and listened to—onsite only, no copying allowed.

Coincidentally, Dad's donation happened just in time for Dylan's people to catch wind of the news and include some of the Minneapolis Party Tape music in the 2005 Martin Scorsese documentary "No Direction Home." One of these tracks, "Rambler, Gambler," was also included on "The Bootleg Series, Vol. 7: No Direction Home" collection. This late contribution earned Dad an invitation to the film's premiere in New York.

In my own years as a travel writer, I've told this story to people all across the world, who've listened rapt and wide-eyed. People who actually know the legend of the Minneapolis Party Tape go particularly bananas, as if they're traveling back through time and touching the essence of young Dylan through my words. The subtext is often, "Who would've known that Minneapolis was more than a bleak, scrappy tundra, even in the early sixties?" We usually don't get musical credit until the era of Prince and the Replacements, and then only grudgingly.

We may not be renowned, but Minneapolis's history as a percolator of brilliance runs deep. Bobby Zimmerman may not have achieved greatness in Minneapolis, but the city undeniably pointed him in that direction before he headed down Highway 61, past the town of Rollingstone, and into history, taking me and my dad along for the ride.

Leif Pettersen is a freelance writer, author, humorist, world traveler and award-winning travel and tourism marketing professional from Minneapolis. He has traveled through 57 countries and lived in Spain, Romania and Italy. His latest book, “Throwing Up: Notes from 35 Years of Juggling,” is available on Amazon along with his travel memoir “Backpacking with Dracula: On the Trail of Vlad ‘The Impaler’ Dracula and the Vampire he Inspired.”