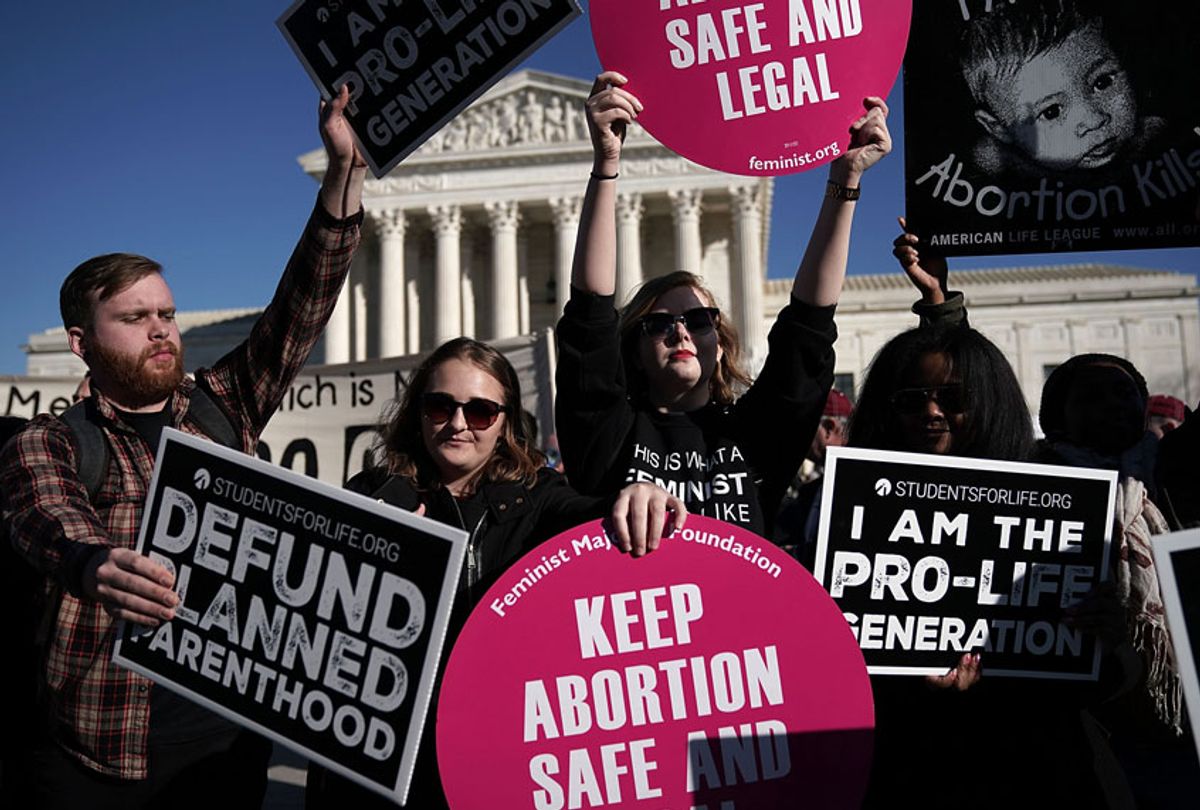 Pro-life activists try to block the signs of pro-choice activists in front of the the U.S. Supreme Court during the 2018 March for Life January 19, 2018 in Washington, DC. (Getty/Alex Wong)
--

The deadly coat-hanger abortion: It's an image that has been central to the pro-choice movement for 46 years, ever since Ms. Magazine published the iconic crime scene photo of Geraldine  Santoro, naked and dead in a pool of her own blood, having died after her lover abandoned her during a botched abortion.

Santoro hadn't actually used a coat hanger, but that was one of the many methods women used in the days when abortion was widely illegal, leading to large numbers of deaths and injuries. Subsequently, the coat hanger became a symbol for the pro-choice movement, adorning signs, T-shirts and other political paraphernalia, a reminder of the dangers of recriminalizing a procedure that women will definitely continue to seek out, whether it's legal or not.

These fears of women dying horribly from illegal abortion are ramping up again, as red states compete to pass the most draconian possible abortion, with an eye towards overturning Roe v. Wade before the Supreme Court. Georgia just passed a law banning abortion, with life in prison as the penalty for women who get one.

(To be clear, abortion isn't yet illegal in Georgia, and most legal experts believe the law will be frozen by injunction until the case is settled in court. So women who need abortion services in the Peach State don't need to panic yet.)

But while the coat-hanger abortion was a legitimate concern in the 1970s, the continued use of the symbol and the rhetoric around it — "women will die" was the feminist battle cry in response to Georgia's new law — is outdated. Even worse, it might be backfiring.

Anti-choice forces, always ready with a sexist stereotype, are using these fears about women dying from illegal abortions to paint pro-choicers as "hysterical." Conservatives know that most Americans don't support a total ban on abortion. So the political strategy is to convince people who aren't personally invested in the issue — particularly ostensibly liberal men — to believe that women are overreacting and that this wave of restrictive new abortion laws pose no danger to their family members or friends. By stoking fears about women dying, feminists are giving conservatives ammo for this argument.

We saw this during the Supreme Court confirmation hearings for Brett Kavanaugh, widely believed to be the fifth vote to overturn Roe. Sen. Ben Sasse, R-Neb., reacted to the women protesting in the audience by sneering that they were exhibiting "hysteria" and  claiming that there have been "screaming protesters saying, 'Women are going to die' at every hearing for decades," the clear implication being that these fears are just female dramatics that can be safely ignored.

Sasse isn't alone. Multiple anti-choice activists and websites have dug into this, claiming that illegal abortion doesn't kill women and, therefore, that abortion bans are no big deal.

This argument unfortunately has legs: It's true that illegal abortion, while not as safe as going to a licensed care provider, isn't really all that risky. In countries where abortion is still illegal, abortion mortality is receding because of improvements to medical care and because of the uptick in use of the easily obtained drug misoprostol, which can terminate early pregnancy relatively safely, even without a doctor's supervision. Even in the U.S. during the years before the Roe decision, abortion deaths were declining, largely because of improvements in emergency room services and because feminists and rebellious medical professionals had created underground networks that offered safe abortions to women.

It's understandable that a lot of feminists have a cynical fear that many Americans can't be moved to care about women's happiness and autonomy. So it was easier to focus on the loss of women's bodies through actual death, and the damage done to homes and families if the women who manage domestic services disappear.

Thus, the coat-hanger argument: Hey, you may not believe women deserve equality, but if they die, who will be around to wipe the kids' butts and vacuum the living room? So keep abortion legal.

This problem is exacerbated because the abortion debate is, at its core, about sex, and a lot of Americans are still uneasy with the idea that women are sexual beings. While that's certainly getting better, a lot of liberals still struggle with openly defending a woman's right to have sex on her own terms, whenever she wants and with whomever she wants.

Instead, you get rhetoric like Barack Obama's 2008 argument, when he said that he taught his daughters "about values and morals, but if they make a mistake, I don't want them punished with a baby." The clear implication was that non-procreative sex was inherently immoral, a "mistake," and the only area of debate was about how serious the punishment should be.

So while coat-hanger rhetoric is entirely well-meaning, that argument sets the bar way too low. It gives conservatives the space to argue that it's fine to  police women's private sexual behavior, deprive them of jobs and health care, and relegate them to second-class citizenship status, just so long as their physical bodies remain intact.

In fact, the coat-hanger argument is also cowardly. Most progressives are pro-choice not because they think sex is an unfortunate event that needs to be grimly managed, but because they believe sex is healthy and that people are better off in general if they can have sex for pleasure instead of just procreation. Rather than shying away from that central moral, social and philosophical argument and veering off into marginal issues like the death rate from illegal abortions, pro-choicers should boldly argue in favor of progressive sexual values.

To be certain, the tide has shifted in that direction, due largely to the rise of the LGBT rights movement and to the rise of online feminism, which has embraced a boldly pro-sex rhetoric. It's much rarer now to hear Democratic politicians talk the way Obama did in 2008.  Instead, we've seen the rise of the #MeToo movement, which boldly argues that women are more than bodies to be kept alive, but full human beings who have a right to sexual autonomy and even to feel normal human desires — to have sex, to get an education, to pursue their careers, to make their own child-bearing decisions.

And what we see from this shift is that it works. Eight out of 10 Americans now reject the idea that women should adhere to traditional gender roles. The percentage of Americans who say that premarital sex is morally wrong has declined from 42% in 2001 to 28% in 2018. In that same time period, the proportions of Americans who believe same-sex relations should be legal has risen from 54% to 75%. Only 4% of Americans think contraception is immoral. And support for Roe v. Wade is at a record high, with 71% of Americans — including 52% of Republicans — saying the landmark decision should stay in place.

All these shifts did not happen because people were worried about women or LGBT people actually dying — no one argued that depriving gay people of marriage equality was literally killing them — but because progressives were willing to argue that sex is a good thing, and consenting adults should be allowed to have it. It turns out that few people, not even conservatives, wish to be seen as prudes, and come along much more easily when these debates are focused on the question of sexual autonomy.

There are a lot of ostensibly pro-choice people out there, especially men, who are eager for the argument that feminists are just being  hysterical about these abortion restrictions, and that letting conservatives have their way on this issue won't really be that bad. Unfortunately, pro-choicers play into their hands by harping on deaths from illegal abortions, which are relatively rare. Instead, pro-choicers should focus on moral issues of "freedom" that Americans largely agree about, such as the right to self-determination and sexual autonomy. The coat-hanger argument is outmoded, and it simply doesn't work.