New rules may redefine who is poor, in order to slash benefits: Critics call it "mathematical gaslighting" 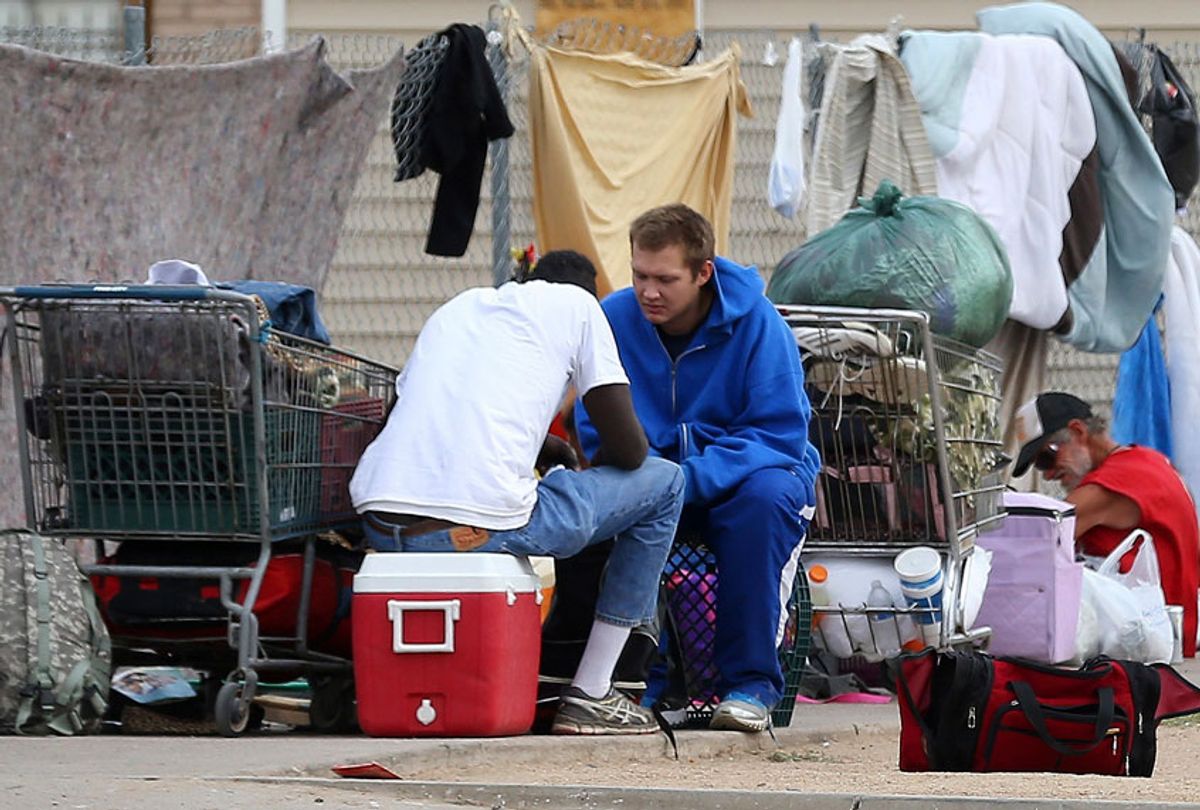 In this May 2, 2019, photo homeless people gather on the sidewalk at an encampment in Phoenix. (AP/Ross D. Franklin)
--

The Trump administration has proposed a new change that would overhaul how the government determines the national poverty level in a move that could cost millions of Americans access to welfare programs.

The Office of Management and Budget proposed a regulatory change Monday that would alter the formula for determining the annual poverty level, which the federal government uses to establish whether people qualify for benefits like Medicaid and food stamps, Bloomberg News reports.

The formula is currently based on three times the cost of a minimum food budget and is adjusted each year for inflation. Last year, the poverty level for a family of four was a mere $25,900. In 2016, more than 40 million Americans were considered to be living in poverty based on the current formula, despite the Trump administration’s claim that the war on poverty is “largely over and a success.”

Now the administration has proposed altering the formula so the poverty level would rise at an even slower rate. This would result in essentially redefining a large number of lower-income people out of poverty, leaving them ineligible for benefits like food aid, medical insurance and housing assistance.

The proposal calls for shifting from the current formula to the so-called chained CPI, an inflation index that typically shows slower inflation increases because it assumes that consumers will be able to replace items that have been subject to price increases with less expensive goods.

“Because of this, changes to the poverty thresholds, including how they are updated for inflation over time, may affect eligibility for programs that use the poverty guidelines,” OMB said in a notice filed to the federal register Monday.

Sharon Parrott, a senior fellow at the Center on Budget and Policy Priorities, told the New York Times that the current formula already fails to take into account basic necessities families need to live. “Simply switching to a lower inflation measure would likely make the poverty line less realistic over time, rather than more accurate, in measuring what families need to get by,” she said.

Parrott warned that the change would deprive millions of Americans of basic needs.

“This policy would, over time, cut or take away entirely food assistance, health and other forms of basic assistance from millions of people who struggle to put food on the table, keep a roof over their heads and see a doctor when they need to,” she told the Times.

The move is the latest in Trump’s efforts to make it harder for poor people to access assistance programs. Last year, the president signed an executive order directing federal agencies to enforce work requirements for welfare recipients more strictly, and to create new rules to reduce who is eligible for the programs.

“Millions of able-bodied, working-age adults continue to collect food stamps without working or even looking for work,” Trump said in December. “Our goal is to move these Americans from dependence to independence, and into a good-paying job and rewarding career.”

Rebecca Vallas, vice president of the Poverty to Prosperity Program at the Center for American Progress, rejected Trump’s claim. She told the Washington Post that instead of helping people get out of poverty, the administration wants to redefine them out of poverty.

“Instead of actually doing anything to cut poverty in America, Trump is trying to fudge the numbers to artificially ‘reduce’ the U.S. poverty rate,” she said. “It’s mathematical gaslighting.”