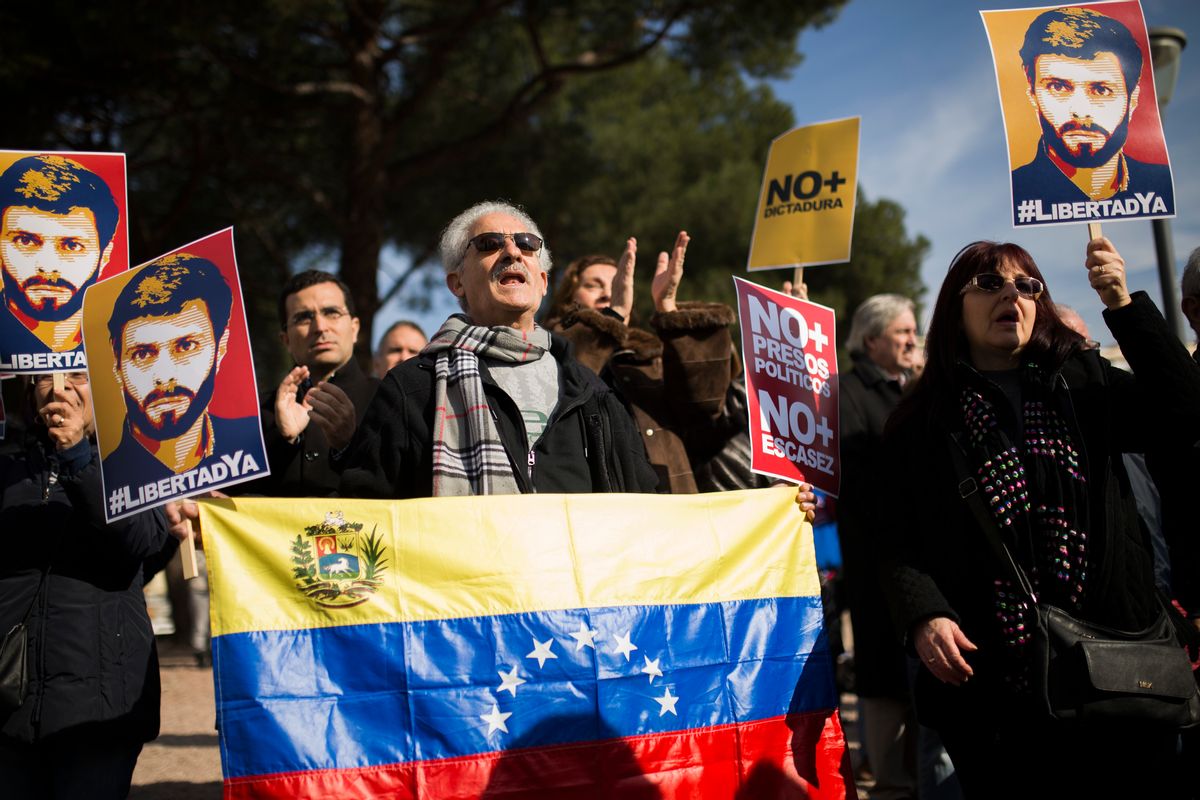 An arrest warrant has been issued for Venezuela’s most famous political prisoner. Leopoldo López, who was released from house arrest to lead an attempted uprising against President Nicolás Maduro on April 30, has sought refuge at the residency of the Spanish ambassador to Venezuela.

The Spanish government says López cannot be arrested while in the ambassador’s residence and that it will not hand him over to Maduro’s government, which accuses López of violating the terms of his house arrest.

Venezuela’s crisis has escalated to new levels of chaos in recent days, but has not succeeded in dislodging Maduro.

On April 30, Juan Guaidó — the leader of the Venezuelan National Assembly, who swore himself in as interim president in January — called for the Venezuelan people to rise up against Maduro. In an early morning video posted online, Guaidó, flanked by soldiers and backed by the United States, said that “Operation Freedom” would be “the beginning of the end” of a regime Guaidó and over 50 countries consider illegitimate.

Next to Guaidó stood, to Venezuelans’ surprise, Leopoldo López, apparently freed from house arrest by soldiers who supported Guaidó’s uprising.

López, a popular former mayor and presidential candidate, was a leading figure in the powerful protest movement against Maduro that began in 2014.

Since Maduro took office in 2013, Venezuela’s economy has faltered, then collapsed. Food, medicine and electricity are scarce. Numerous elections, including Maduro’s reelection last year, have been marred by irregularities.

Maduro has resisted the opposition’s calls for new elections. He claims the country’s economic troubles and popular unrest are a U.S. plot against his government.

After one major 2014 opposition march in Caracas grew violent, López was charged with “arson and criminal incitement.” The moment he waded through crying supporters to turn himself into police on May 18, 2014, he became the face of Venezuela’s democratic struggle.

Supporters saw López as a martyr who confronted the dictatorship rather than going into exile, as so many Venezuelan dissidents have. He was sentenced to 14 years in prison.

López’s face was printed on T-shirts, posters and flags that flew across the country. A website, FreeLeopoldo.com, called for “the immediate release of Venezuelan opposition leader Leopoldo López, who was illegally imprisoned in an attempt to silence dissent and free speech.” A hashtag, #FreeLeopoldo, spread his cause worldwide.

After three years, the Maduro government in 2017 conceded to political pressure and released López to house arrest at his home in the swanky Los Palos Grandes neighborhood. By then, the opposition movement had been all but vanquished.

Then, three months ago, Juan Guaidó reinvigorated the resistance movement waging a U.S.-supported “peaceful rebellion” against Maduro. Meanwhile, López says, he was meeting with commanders and generals from Venezuela’s armed forces in his home, while still under house arrest.

To the majority of Venezuelans who reject Maduro’s regime, López’s surprise participation in “Operation Freedom” seemed like a sign that political change might actually be on the horizon.

Their hope, and López’s freedom, would be short-lived.

After being received as “guests” of the Chilean government at the Chilean Embassy in Caracas on the evening of April 30, López and his family took refuge with Spain, which recognizes Guaidó as Venezuela’s rightful president.

López is the great-great-grandson of former Venezuelan President Cristóbal Mendoza and is said to be related to Simón Bolívar, the Venezuela-born general who liberated five South American countries from Spanish rule in the early 19th century.

López studied economics and sociology at Kenyon College in the United States on a swimming scholarship. In 1996, he got a master’s in public policy at Harvard.

He began his political career in 2000, with two four-year terms as the dynamic and popular mayor of Chacao, an upper middle-class municipality of Caracas. By 2008, the end of his second term, he had a 92% approval rating.

That’s when President Hugo Chávez, Venezuela’s late socialist leader and Maduro’s mentor, accused López of corruption and banned him from running for office. López was one of many popular Venezuelan politicians to face trumped-up charges that served to stop them from electorally challenging Chávez.

In 2011 the Inter-American Court of Human Rights ruled that López must be allowed to run for office — an order the Venezuelan Supreme Court rejected.

López, who planned to run for president against Chávez representing the Voluntad Popular — a political party that he, Guaidó and other opposition figures founded in 2009 — withdrew his candidacy. Instead, he backed opposition candidate Henrique Capriles Radonski.

Chávez won the 2012 presidential election, then died a few months into his term. Maduro, his vice president, took office in 2013.

López was sentenced to prison a year later. In February 2017 his wife, Lilian Tintori, traveled to Washington to discuss his case with U.S. President Donald Trump and Vice President Mike Pence. Both expressed public support for her husband, and the Trump administration has been a leading voice in favor of Guaidó.

This story is an updated version of an article originally published on April 30.

Marco Aponte-Moreno, Assistant Professor of Global Business and Member of the Institute for Latino and Latin American Studies, St Mary's College of California