Mourning my mother and reading "Room"

Child or adult, we make our mothers and their suffering a part of us, even when they are gone 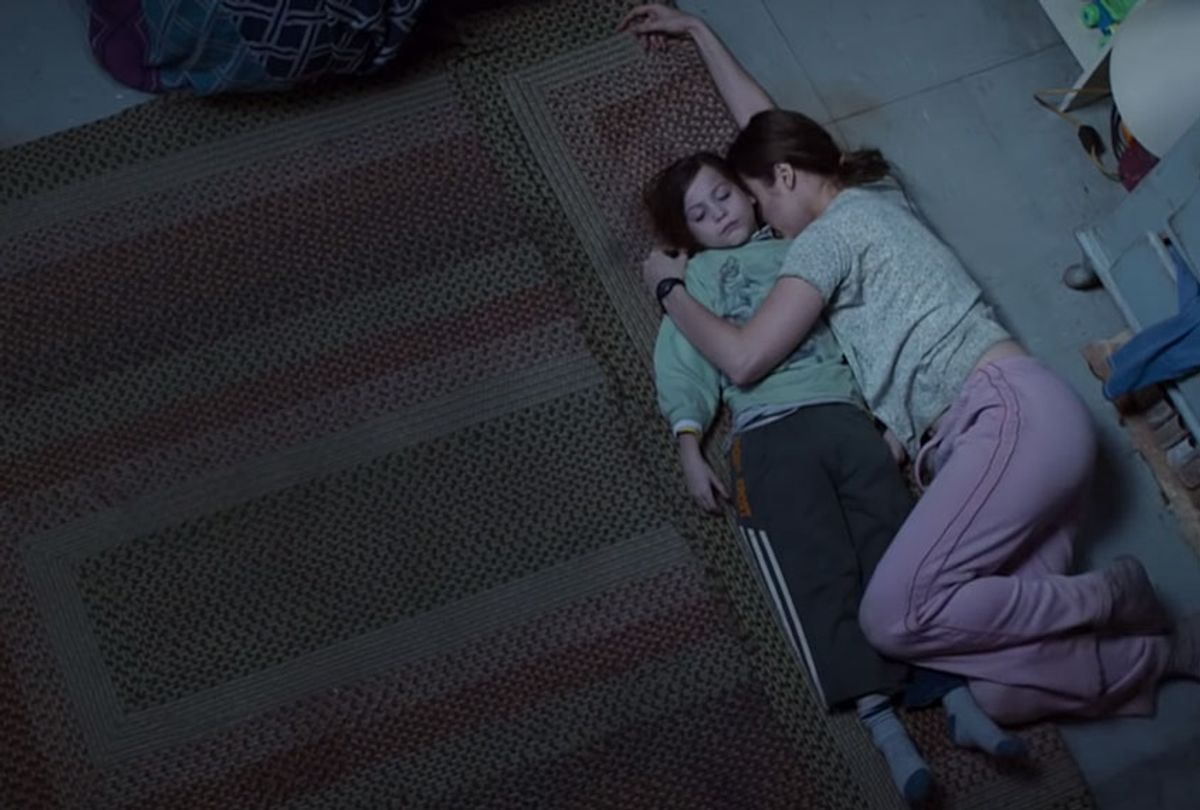 Saturday, April 16, 2011. I had been living in a new city, in a crumbling studio apartment on the edge of downtown Louisville, Kentucky, for seven months. At age thirty, I lived like an invalid. My home, half of the attic of an old Victorian house, was my personal bubble — not a happy place, but one that had become familiar as long as I stayed within its walls. My boss, Pattie, had explained to me that there was novelty on the horizon as the Kentucky Derby season commenced, starting with Thunder Over Louisville that day. "Thunder" is a festival on the banks of the Ohio River, including flight shows by the US Navy Blue Angels and culminating in an elaborate fireworks display. Pattie spoke of the event with a wistful excitement that piqued my interest, though not enough that I would venture out to see it.

Still in my pajamas, I picked Emma Donoghue's "Room" off of my bookshelf. Beside the book sat a large ziploc bag of jewelry that had, until recently, belonged to my mother. There was a set of onyx beaded necklace, bracelet and earrings. A peridot bracelet. A gold and silver bracelet. A multi-gemstone ring in blue, green, red, yellow and purple. I slipped the ring onto my pinky, where it fit perfectly but looked absurd, like a mob boss’s tacky, ill-gotten bling. It was meant for the ring finger and would need to be resized. Two necklaces she made herself with beads, red and amber. I hadn’t worn any of them yet, or even found a decent jewelry box to keep them in, but I knew their previous owner had intended them to become my most treasured possessions. Almost eight weeks to the day after my mother died, I returned to my bed with the book, feeling no urge to take a shower, call a friend to make plans, or find a jeweler who could fit the ring to my finger. I was grateful for this dreary, drizzly day, the perfect excuse for hunkering down inside.

I don't remember exactly when or where I bought "Room," but I do remember why. Despite the almost-gimmicky premise, it was a buzz book in its hardback and paperback iterations; it had received solid reviews and it carried a tinge of guilty-pleasure salacity. The summer before, I'd seen news reports about the rescue of Jaycee Dugard, a California girl who'd been kidnapped at age 12 and then had two daughters by her kidnapper, who imprisoned her in his backyard and raped her repeatedly over 12 years. The news reports on Dugard were horrifying drama without context, and "Room," a fictional kidnapping story, promised 300 pages of humanizing details.

The book was the great read I had hoped for. The protagonist, five-year-old Jack, is observant, brave, and full of love for his mother. On Jack’s fifth birthday, Ma decides it's time for them to escape the 12'-by-12' garden shed they've been held in. Though he's hesitant to leave the only home he's ever known, he accepts his mother's plan and becomes her partner in a risky escape plot. With a child’s straightforward candor, he narrates their compelling tale of captivity and freedom.

I raced through the book that day, reading the final pages after dusk. The sound of fireworks had begun to echo across downtown Louisville. Still in my pajamas, I walked out onto the rickety wooden fire escape to see what I could see. A few families had parked on the roof of a hospital parking garage across the street to watch the show.

A couple miles from the river, my view was limited. I caught glimpses of the highest fireworks and saw a few bursts of color through the trees in my yard. It was a sliver of what the crowd at the river was seeing, but I felt vindicated. I didn't need to leave the house to see the show. I was overwhelmed by pride in myself that I'd managed to read an entire book, a feat of focus and interest that hadn't happened for several months. Even more impressive, I'd read the book from cover to cover in one day. I was in pajamas and alone on the night of a major community event, but I'd taken a step forward on the path to being myself again. That was worth celebrating.

A couple years later, I participated in a white elephant book exchange. Though I am typically a book hoarder, I didn't have any problem wrapping up my copy of "Room" and passing it on to its next reader. I pressured myself to give a good book, and I remembered how quickly I'd turned the pages, eager to see what happened to Jack and Ma. I thought I would never read the book again. It was good but it wasn't the greatest, I thought. And the subject matter was so bleak.

I returned to that rainy day in my apartment when the movie based on "Room" came out five years later. The movie’s visuals were a slap in my face, embarrassingly so. In my memory, Jack and Ma’s room was small, but light. I had pictured white walls and sun streaming in from the skylight. Ma was beautiful, engaged with Jack (most of the time), and creative. I truly hadn’t considered the possibility that Jack’s perspective might be unreliable. In the movie, Room was tiny and dingy. The walls were mottled gray and barely any light came in. Ma was haggard. As a reader, I had bought in to Jack’s rosy vision of his mother and his world. The filmmakers forced me to see the situation through grown-up eyes. I wondered if that particular book (the story of a mother and child who are so close that they've been in the same room, all day every day, for every minute of the child's life) should have had more resonance for me when I was freshly grieving my mother. I requested a copy from the library. This time, I read slowly.

In 2011, I thought I had chosen a book about a kidnapping, but what I read in 2016 was a book about how to be a parent in the worst of circumstances, and how to adapt when the world changes beyond recognition. Jack's Ma, against her will, is dragged into the ultimate parenting experiment. The average mother may navigate a whirlwind of laundry, school lunches, PTA meetings, neighborhood dynamics, coupons, and budgets. Jack’s Ma knows none of this. Locked in a room with only the supplies her captor provides, she is forced to improvise a world that is home, school, playground and doctor’s office. As a result of her resourcefulness, Jack grows strong, stays healthy and learns to read and write. She creates stories that help him make sense of his small world. Ma's inventive mothering seems almost too good to be true, but the depth of Jack's devotion and attachment to her prove otherwise. Even Ma’s "gone" days, when she takes to her bed, catatonically depressed and non-responsive, aren't enough to break her son's bond of total trust in his mother. After his fifth birthday, Ma continues to nurse Jack. The only distance between them occurs at night, when she closes him into the wardrobe so he won't see the nightly visit from her captor, Old Nick.

Eight pages into the book, Jack makes his first mention of Ma's teeth, which are rotting due to lack of dental care. While she creates a world where her child grows and thrives, her body is falling apart. "Bad Tooth," an upper molar, is the worst in her decaying mouth. Eventually, the tooth, "all yellowy with dark brown bits," comes out in a bagel she's eating for dinner. Jack snags the tooth and keeps it for himself, a relic of his mother to keep close.

When Ma decides it's time for Jack to know about the real world, and time for them to escape, he resists. He takes offense when she tells him that Room is just "a tiny stinky piece" of the world. He questions her. "Why don't you like it here with me? . . . I like it here with you." Despite his reservations about leaving Room, Jack tucks Ma's tooth into his sock ("You're a bit of Ma, a little bit of Ma's dead spit riding along with me") and plays dead so Old Nick will take him out of Room. He seeks help and saves Ma. Reunited in the back of a police car, Jack asks Ma to return him to their bed. When she tells him they’re never going back, Jack is beside himself, terrified and devastated to be leaving his home.

Once they've escaped, Jack's world is blown apart. In Room, his mother had given him consistency with little novelty. Outside of Room, the light of the sun, the shiny police precinct floors, even blue plates, metal silverware, and pancakes with syrup are too much for Jack. He longs to return to the simple pleasures and comforting predictability of Room. To Ma, this desire is incomprehensible. Room is her prison, the site of her suffering. Ma expects Jack to accept the new world as she authors it, just as he accepted the old world she made for him.

Ma struggles as well during the transition to life outside of Room. After she attempts suicide, Jack explores the world without her for the first time. While Ma recuperates in the hospital, his grandmother introduces him to his cousin and to potato chips. He swings in a hammock and handles a lit match. Through all his new experiences, Jack holds on to Ma's rotten tooth as a sort of comfort item. Falling asleep on an air mattress next to his grandmother's bed, he sucks on the tooth, wondering why this life is considered better than the life he lived in Room. As Jack acclimates to the world around him, the tooth changes, first no longer tasting like ma, and eventually tasting like nothing. Regardless, he clings to the tooth, his single concrete connection to the Ma who raised him in Room.

Eventually, Jack and Ma reunite. Together in their new apartment, Jack lifts up her shirt and attempts to nurse. After Ma explains that her milk has dried up, Jack goes for the next best thing — the rotten tooth, which he can't locate. Ma (the new Outside Ma, who's happy, confident, and bright) assures him the tooth is nothing to miss, but Jack insists he needs it. Silently, he ponders where the tooth has gone. "I think maybe I did swallow him by accident. . . . maybe he's going to be hiding inside me in a corner forever."

When I was newly grieving, I didn't see any parallels between myself and Jack. Years later, his attachment to the rotten tooth resonates at every level. Away from his Ma, Jack adapts to the new world, but clings to the tooth. His artifact is not a ring or a bracelet, but he wants it with him nonetheless. Child or adult, we make our mothers and their suffering a part of us, even when they are gone. My crumbling apartment and my new jewels were ground zero of a new life. Whether our Ma dies or is reborn, the person she was stays with us, hidden inside our corners as we step into an unimaginable world.

Rachel Mack is a therapist and writer, working on a book about pop culture and grief. She tweets @_StoryGirl.