What's behind Donald Trump's bewildering avalanche of lies? Nothing good. Part 1 of 2

Rather than parroting or counting Trump's lies, we need to understand his "strategic and instrumental" rhetoric 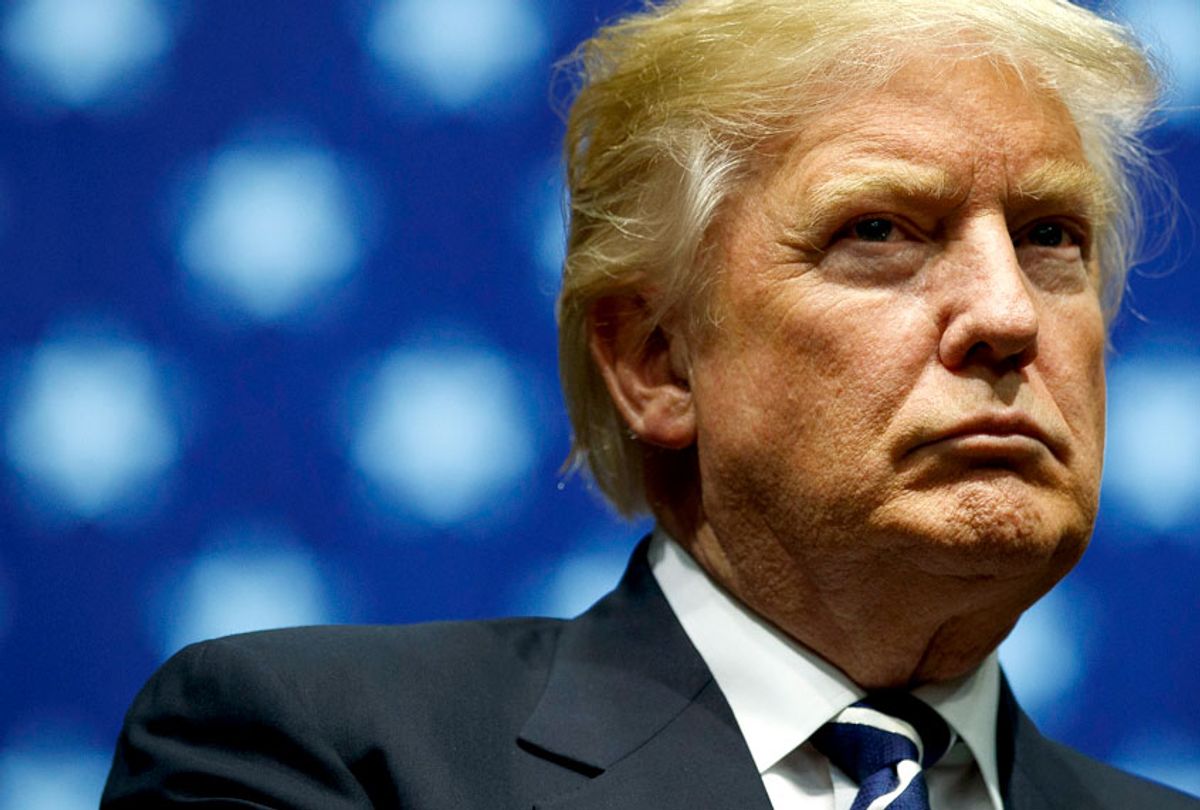 Unusual times demand unusual measures. If you value Salon's original reporting and commentary, we urge you to support it — by supporting our writers directly. Right here, right now, you can make a financial contribution to help make Paul Rosenberg's work possible. All funds go directly to writers.

So Donald Trump has told 10,000-plus lies, or “misstatements,” since taking office as president. So what? All those lies, and what sense have we made of them? That’s the first question that really matters: What sense can we make of an avalanche of lies designed to overwhelm our capacity to make sense of anything? The second question is also important: What can we do about them?

One thing should be clear: The media shouldn’t be repeating them, giving Trump’s lies more life. Unfortunately, that’s exactly what they’re doing, according to a recent Media Matters study, which  found that major media outlets routinely amplified Trump’s false claims on their Twitter accounts — 19 times a day, on average. The study period ran from Jan. 26 to Feb. 15 of this year, and its "key takeaways" included:

So, that’s what we shouldn’t be doing. But what to do instead? That should be informed by knowledge and understanding — first about the nature of Trump’s lies themselves, and then, more broadly about how they function and what they’re intended to do.

We can make a start in two ways: First, by looking more closely at Trump’s most frequent lies and considering how we might build on our knowledge of them, to cover all his lies more responsibly; second, by considering what academic researchers have found, which can help inform and direct us moving forward. Beyond that, however, the real work lies in coming to grips with Trump's use of rhetoric, and the threat that poses to democracy and the institutions and values on which it depends.

Plumbing the depths of the "Bottomless Pinocchios"

Trump’s most frequently repeated falsehoods are those the Washington Post now identifies as “bottomless Pinocchios." Most frequent of all is his claim that his “big, beautiful wall” is already being built — a false claim repeated 160 times. This top-rated lie is all the more remarkable given how recent it is. The original "Three Pinocchios" for the claim came only on April 5 of last year.  Trump’s only other false claims that come close are his overstating the impact of trade deficits (147 times), claiming his tax cut was the biggest in history (143 times), and claiming that the U.S. economy has never been stronger (134 times). The cut-off for bottomless Pinocchios is 20 repetitions, and the bottom two — at 22 repetitions each — are falsely claiming to cut the cost of the F-35 jet and wildly exaggerating the costs of illegal immigration, which is quite likely a net benefit to the country.

A better sense can be gained by grouping the bottomless Pinocchios by subject matter, which give us the following set of totals:

It’s hardly an accident, or a surprise, that the top two subjects of Trump’s lies revolve around the so-called issues that made him president — his racist appeals to fears and hatred of immigration and his bogus claims of brilliant business success — exposed as never before in the recent New York Times tax record exposé. The fact that these two subjects represent 5% and 4%, respectively, of Trump’s 10,000 lies only underscores the value of simply keeping track.

Of course, Trump tweets vastly more lies about all these subjects than just the ones that qualify as “bottomless Pinocchios.” But it gives us a starting place and a solid sense of how his lies might be grouped. On  could also count 101 lies relating to alleged Democratic collusion — 66 alleging that the Democrats were the ones who colluded with Russia (counted above under "lies about Trump being persecuted"), and 35 claiming that Obama gave $150 billion to Iran.

Grouping Trump’s false claims under broad categories this way  highlights the false attacks he’s mounting against others, as well as the false glory he’s trying to claim for himself. Given that journalists all know that he’s lying by now, this should be the minimal standard for telling the truth about what he’s doing — rather than simply reporting his lies as if they were true, and then belatedly or half-heartedly fact-checking them, This is step one: Stop doing everything wrong, as the Media Matters study reports we are doing now.

Scratching the surface: Lessons from academics

In a note at the end of their story, Post fact-checkers pointed to three examples of academics using their fact-checking data for important purposes. In December of 2017, UC Santa Barbara psychologist Bella DePaulo reported (in the Post and Psychology Today) that Trump lied a lot more, and a lot more viciously, than most people do.

In her earlier work, she had found that most lies are either self-serving, or meant to flatter others — with the former about twice as common. Only around 1 to 2% of lies were defined as cruel. Trump, in contrast told 6.6 times as many self-serving lies as kind lies, and fully 50% of his lies were cruel.

In addition DePaulo wrote, Trump's lies "often served several purposes simultaneously (for example, sometimes they were both self-serving and cruel).” This last point echoes something noted above: One bottomless Pinocchio may fit into two different categories of lies, serving to advance two different agendas. Trump’s use of lies to serve multiple purposes should surely be a central focus of attention moving forward.

In May 2018, Tali Sharot of University College London and Neil Garrett of Princeton addressed the increased pace of Trump’s lying, from about five false claims a day during his first 100 days to nine a day from March 1 to May 1, 2018. They pointed to their own research as well as other studies showing that "our response to our own acts of dishonesty is strong at first, but over time decreases," a process they dubbed, “emotional adaption.” They also cited other research showing that "individuals adapt not only to their own dishonesty but also to that of others," and pointed to other evidence that Trump’s dishonesty hadn’t diminished his support.

If anything, these findings are cautious or understated, given how Trump’s pace of lying has continued to skyrocket. The Post itself recently reported, “All told, the president racked up 171 false or misleading claims in just three days, April 25-27. That’s more than he made in any single month in the first five months of his presidency.” Trump’s escalation of lying deserves focused attention as well — and we’ll touch on it again below.

Finally, research by Sophie Van Der Zee of Erasmus University and her colleagues "found substantial linguistic differences between factually correct and incorrect [Trump] tweets and developed a quantitative mode" which could predict the veracity of Trump tweets with 73% overall accuracy. As they explained, "Lying can cause behavioral change [in language use] because it is cognitively demanding, elicits emotions, and increases attempted behavioral control."

Van Der Zee's research is very important; here's why. The success of this method strongly suggests that a) Trump knows that many of his false statements are lies — an enduring subject of debate — and b) he responds to his own lying, at last subconsciously, much as other liars do.

These are interesting findings, but they only scratch the surface of what’s going on. To make sense of the larger picture of what Trump is doing, and the even more urgent question of what we should do about it, we need to look beyond the wall of Trump’s 10,000 lies to the larger landscape around them.

To place Trump lies in a larger context, I turned to two experts whose focus is much broader. Because such a prodigious liar can’t be fully understood without considering the full range of his rhetorical expression, I first turned to Jennifer Mercieca, a historian of rhetoric, whose book, "Demagogue for President: The Rhetorical Genius of Donald Trump," (table of contents here) will be published in early 2020.

And because Trump’s demagoguery itself needs further explanation and context, I also turned to Elizabeth Mika, a contributor to the “The Dangerous Case of Donald Trump,” to help make sense of the social psychodynamics involved — not just in Trump’s behavior, bur more generally.

“It's important to realize that lies are marketing for Trump,” Mercieca said. “He isn't concerned about whether or not a statement is true or false. Veracity isn't important at all. He is concerned with shaping our understanding, with framing.”

This is a  fact that’s widely recognized, but seldom seems to sink in — as witnessed by how pervasively the media continues to propagate Trump’s lies, even when recognizing them as such.

"Everyone quotes the ‘truthful hyperbole’ thing from his book ["The Art of the Deal"], but Trump didn't even write that,” Mercieca continued. “Tony Swartz said that he made it up on Trump's behalf because it acknowledged, 'It's a lie, but who cares?' I think that's about right. Trump doesn't even care that it's a lie. It's just a means to an end. Trump is a very strategic and instrumental communicator.”

The evidence from Van Der Zee’s study arguably suggests, let us note, that  Trump actually does care, at some level, but it’s simply not part of his conscious calculation.

“Trump's lies fall into different categories, such as hyperbole and humbug, like P.T. Barnum,” Mercieca said (see her own account of Barnum’s multi-layer humbug here), “but also more menacing categories of speech that border on authoritarianism. Trump proclaims his truth as the one and only truth and asks his audiences to deny their own perception of reality. It's a pre-Cartesian view of truth — ‘truth’ is no longer what we perceive (I think, therefore I am), but what Trump says is true.

“Folks who call it a form of ‘gaslighting’ are correct,” Mercieca went on. “Trump's constant blizzard of lies denies us the possibility of knowing. It's its own epistemology. And if that doesn't frighten you, the constant barrage of lies are authoritarian — they are used to prevent him from being held accountable for his words and actions.”

But the lies don’t just work in isolation, she noted:

The lies serve in conjunction with his other rhetorical strategies to attract attention, control the national dialogue, and distract our attention. I write about how he routinely uses ad hominem attacks, ad baculum threats of force, reification (treating people as objects), ad populum (appealing to the wisdom of the crowd), American exceptionalism, and paralipsis (I'm not saying, I'm just saying). The lies are part of all of those strategies. He lies when he attacks, he lies when he praises, he lies and lies and lies. There is no truth that matters.

It’s this kind of framing of Trump's lies that’s been so dramatically and tragically absent from virtually all mainstream media coverage. What I wrote earlier about categorizing Trump's lies ties in directly here. Mercieca's rhetorical distinctions suggest further ways of refining how we categorize Trump’s lies: ad hominem attacks against groups and individuals, for example, or categories of who is being threatened or treated as an object. We also need to use these categories to critique Trump’s rhetoric holistically — not just keep track of his blatantly false statements, but also the threats, promises and postures that serve as their oxygen.

In Part 2: Best explanation for Trump voters? "Gullibility and cynicism"