Why did Trump go after a Native American tribe in Massachusetts? The reasons are even worse than you think 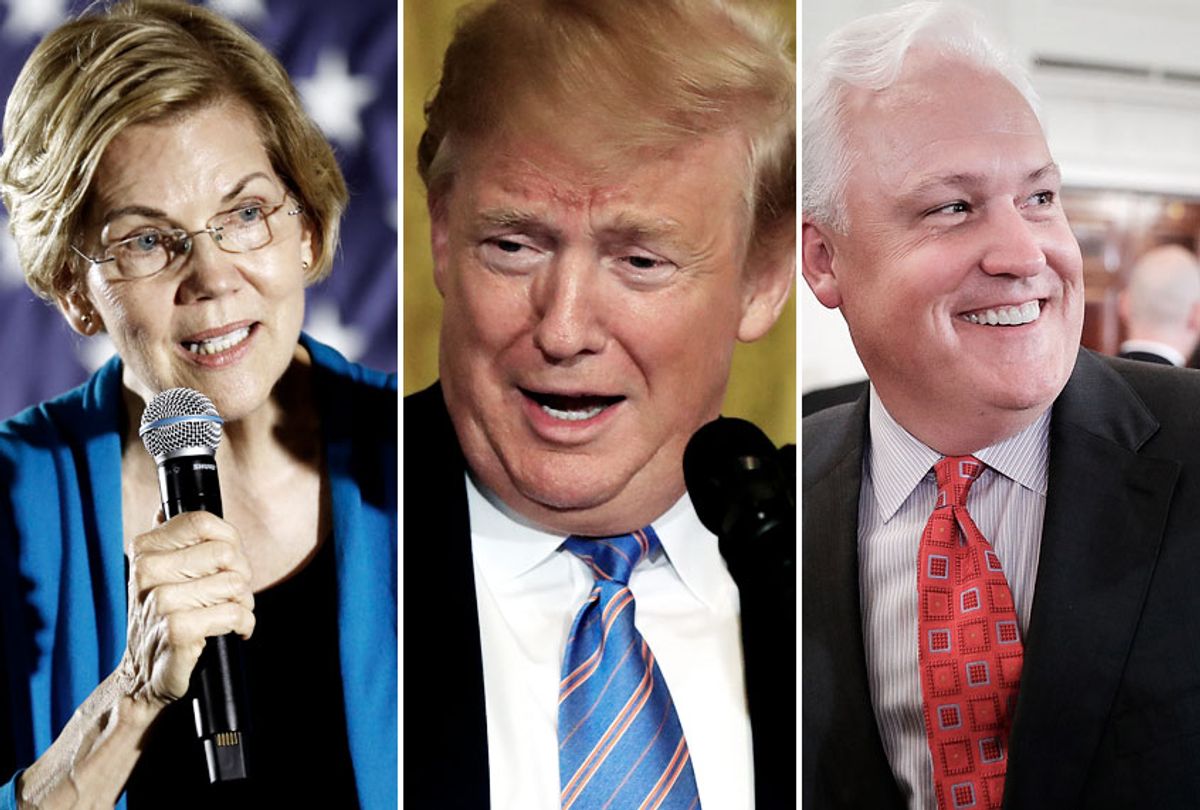 For a while, a popular assessment of Donald Trump’s wild, early-morning rants and attacks on Twitter was that they served as a strategic distraction from even more sinister and potentially damaging goings-on. Eventually, however, political pundits accustomed to norms and decorum came to accept that while Trump may be a brilliant marketer, he is also just a stubborn old man whose worst habits can’t be tamed.

Twitter, for Trump, is an effective medium to continue controlling media coverage — or to complain about “Fox & Friends” — from the comfort of his bed. Unlike during the presidential campaign, during his presidency, Trump’s Twitter feed has more often served as an outlet for daily narrative-setting than as a tool of distraction. Occasionally, however, some of the president’s tweets do indeed seem as if they were meant to cover up something more serious.

The president’s unexpected comment on an obscure piece of legislation that impacts a private-sector venture, while invoking a familiar attack on a political rival, was certainly peculiar. It also might be a case of corruption in plain sight.

Trump’s seemingly random tweet in opposition to a bill recognizing a Massachusetts Native American tribe was prompted by a Republican lobbyist who represents a gaming company that would compete with the tribe's planned casino.

In 2016, however,  a U.S. district court ruled that Interior had overstepped its authority when it took the land into trust because the tribe was not under federal jurisdiction at the time the 1934 Indian Reorganization Act was enacted. Trump’s Interior Department last year overturned the Obama-era decision allowing for the trust. So Rep. William Keating, D-Mass., introduced a legislative route for the tribe to build its casino: the Mashpee Wampanoag Tribe Reservation Reaffirmation Act or H.R. 375,  which would provide congressional approval of the Mashpee as a Native American tribe with sovereignty over their land.

Lawmakers had originally scheduled the bill for a full vote by the House on Wednesday after Democrats fast-tracked it under a suspension of the rules for so-called noncontroversial bills.

The president of the United States called a prominent political foe "Pocahontas," even while supposedly calling for the protection of Native American rights. Why would Trump connect this bill to Sen. Elizabeth Warren in particular, when the entire Massachusetts congressional delegation has pushed for this recognition for the tribe? And why would he drag up his infamous slur one more time?  Probably to get people talking about the slur and not his meddling, which appears to have been spurred on by a conflict of interest.

Before Trump tweeted his opposition, the husband of one of his top White House advisers sent out a similar tweet of opposition focused on Warren.

Matt Schlapp is a lobbyist and chairman of the American Conservative Union, the group that hosts CPAC every year. He is also married to Mercedes Schlapp, a senior White House official. His firm, Cove Strategies, has been paid $30,000, according to the Daily Beast, to lobby on behalf of Twin River Management Group, which owns two Rhode Island casinos that sit approximately 21 and 33 miles, respectively, from the land where the Mashpee tribe would like to build a new casino resort. If Trump successfully quashes the bill recognizing the tribe, either through legislative pressure or a veto, Schlapp’s client has one less competitor.

Drain the swamp? The president just refilled it with Trump water.

Democrats yanked the bill from consideration shortly after Trump’s tweet and have said they will reintroduce it under regular order now that it is no longer considered “non-controversial.”

Trump is "allowing special interest lobbyists like Matt Schlapp — who happens to be married to his staffer — to direct federal policy," said Rep. Ruben Gallego, D-Ariz., who chairs the Natural Resources Subcommittee on Indigenous Peoples,  in a statement.

Rep. Joe Kennedy III, D-Mass., a co-sponsor of the bill, tweeted: “We should expect nothing less than this from a man who lies for a living. But this lie is especially egregious because it threatens the very existence of the Mashpee Wampanoag Tribe that welcomed the Pilgrims to these shores. This is dangerous (once again) & racist (once again).”

That our president goes out of his way to thumb his nose at ethics is only one part of the story. Trump has a long established animus against Native Americans. That began well before he crossed paths with Elizabeth Warren, but seemed to arise from the fact that gambling casinos established on Indian tribal lands cleaned his clock in the casinos he owned. Trump actively pursued several gambling businesses in the early 1990s, when he testified before Congress.

“I love to compete but I like to compete on an equal footing. I’m competing and paying hundreds of millions of dollars in taxes. ... My so-called opponent is competing and paying no tax,” Trump said while testifying before Congress regarding tribal casinos in 1993, according to a recording of the hearing. As a New York Times report revealed this week, at the time of Trump’s complaints he claimed $814 million in losses and paid zero in federal taxes.

During that same testimony, he said of Native Americans involved in gaming: “They don’t look like Indians to me.”

Regardless of the direct reason this bill was pulled, it certainly feels as if Trump's attack was not based on the merits of the legislation, but either about lobbying by a competitor or political payback against Warren and Native Americans. Trump’s racism can’t be hidden, so he is using it this time to hide his corruption.