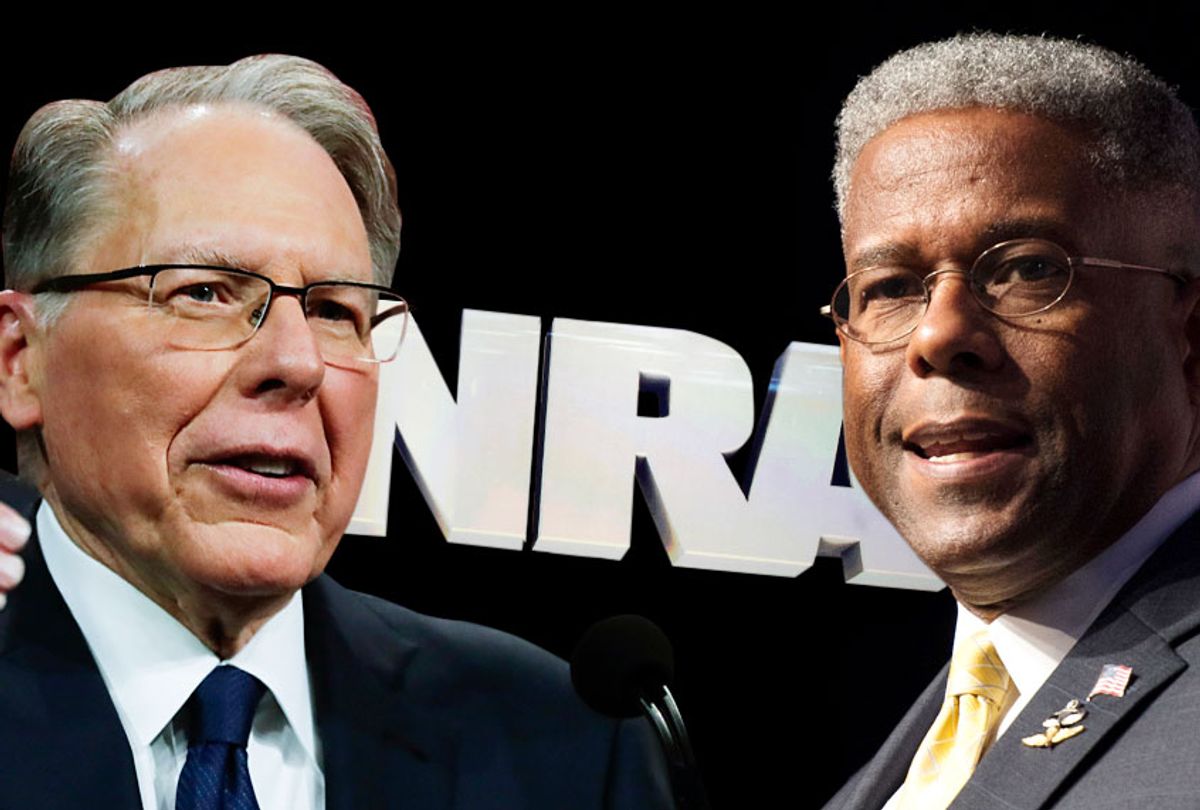 On Tuesday, former congressman and National Rifle Association (NRA) board member Allen West called on the powerful gun lobby's CEO Wayne LaPierre to step down amid allegations of financial misconduct.

"I do not support Wayne LaPierre continuing as the EVP/CEO of the NRA," West, R-Fla., wrote in a blog post. "There is a cabal of cronyism operating within the NRA and that exists within the Board of Directors. It must cease, and I do not care if I draw their angst."

West said NRA President Carolyn Meadows lied to news outlets when she claimed the group's board was aware of financial misconduct allegations, including more than $200,000 of wardrobe purchases by LaPierre that were charged to an NRA vendor. He also said a statement defending LaPierre from Charles Cotton, the chairman of the group's audit committee, was a lie.

"These statements have maliciously, recklessly and purposefully put me, and uninformed Board members, in legal jeopardy," he said.

West's blog post is the latest blow for the NRA, which has come under mounting scrutiny in recent weeks. Rep. Brad Schneider, D-Ill., called on the Internal Revenue Service to investigate the NRA's business dealings and consider revoking its tax exempt nonprofit status last week.

Senate Democrats announced earlier this month they have asked current and former NRA executives, as well as the organization's public relations firm, to turn over documents as they investigate claims of self-dealing and the group's nonprofit status.

The move came just after New York Attorney General Letitia James revealed her office had launched an investigation into the tax-exempt status of the organization, which is chartered in the Empire State. James has issued subpoenas and sent letters telling the organization and its affiliated entities to preserve all relevant financial records.

The NRA has also been rocked by an internal leadership fight that appeared to come to a head earlier this month at the group's annual meeting in Indianapolis. LaPierre alleged in a letter at the time that former NRA President Oliver North had tried to extort him by threatening to reveal a "devastating account" of the group's finances unless LaPierre stepped down from his position and withdrew the NRA from a lawsuit it had filed against the group's PR firm, Ackerman McQueen.

North sent the board a letter of his own in response, saying he was only acting in the NRA's best interests, and he was forming a "Crisis Management Committee" to investigate internal financial matters. North had previously sent a longer letter to the NRA board highlighting allegations of financial misconduct, including more than $200,000 of wardrobe purchases by LaPierre that were charged to an NRA vendor.

North announced earlier in May that he would not run for re-election after multiple news outlets published prominent articles detailing alleged financial mismanagement by top officials at the organization.

Shannon Watts, an activist who founded Moms Demand Action For Gun Sense in America, said the gun control organization Everytown For Gun Safety had filed its own complained to the IRS over the NRA's tax-exempt status.

Additionally, Sen. Cory Booker, D-N.J., a 2020 presidential candidate, said he also plans to call on the IRS to investigate the NRA's alleged misconduct.