"This will go to the third branch of government to be resolved," Mnuchin tells congressional lawmakers 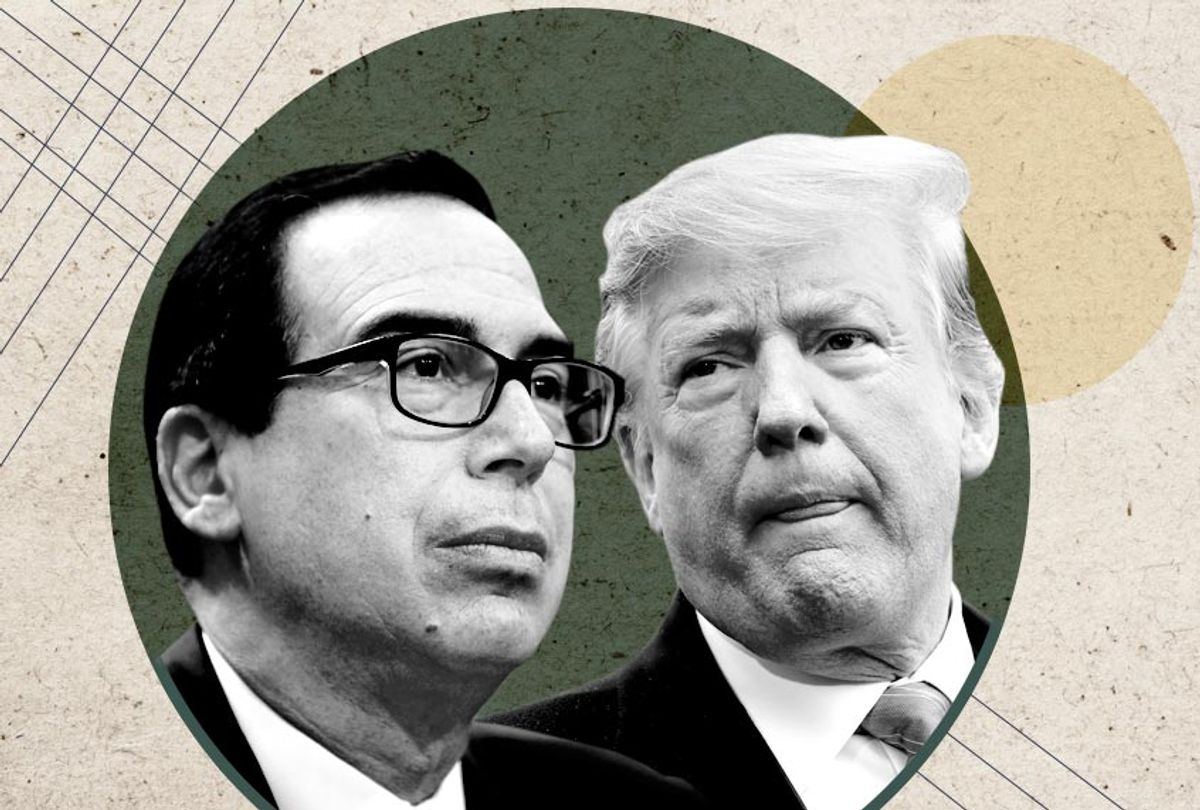 Treasury Secretary Steven Mnuchin on Wednesday said the executive branch would not provide copies of President Donald Trump's tax returns subpoenaed by House Democrats, signaling the dispute will likely be resolved in the courts.

"We haven't made a decision, but I think you can guess which way we're leaning on our subpoena," Mnuchin said at a Senate Appropriations subcommittee hearing. He added, "I take great comfort that there is a third branch of government to deal with that important issue."

"This is why there are three branches of government, and if there is a difference of opinion, this will go to the third branch of government to be resolved," Mnuchin said, referring to the judicial branch.

House Ways and Means Committee Chairman Richard Neal, D-Mass., made a formal request for six years of Trump's personal and business tax returns last month, which the Treasury Department rejected last week, prompting Neal to subpoena the documents last Friday. It is possible Neal will pursue a lawsuit in federal court in order to enforce the subpoena.

Neal's subpoena was one of several subpoenas issued by congressional Democrats conducting oversight of the Trump administration. House Judiciary Committee Chairman Jerry Nadler, D-N.Y., subpoenaed the Justice Department for the unredacted version of special counsel Robert Mueller's report on Russian interference in the 2016 presidential election and the president's alleged efforts to obstruct the probe.

Democrats could also move to hold Mnuchin or IRS Commissioner Charles Rettig, to whom the original request for Trump's returns was addressed, in contempt of Congress.

Neal first made the request for six years of Trump's personal and business tax returns on April 3. He originally demanded the returns under a portion of the federal tax code that says the IRS "shall furnish" the returns of any taxpayer to the chairman of the tax-writing Ways and Means Committee.

Mnuchin refused to provide the documents by the chairman's original April 10 deadline, saying the Treasury needed more time to complete the request and consult with the Justice Department. Neal then set a second deadline of April 23, which Mnuchin also missed, saying he expected Treasury to make a final decision by May 6. The Treasury missed that deadline last week.

Democrats have been on a hunt to obtain Trump's tax returns since he bucked decades of tradition when he refused to release them during the 2016 election cycle. Although not required by law, every major party presidential nominee since the 1970s has chosen to publicly release his or her tax returns except for Gerald Ford, who only released a summary. Financial disclosures can help paint a fuller picture of a candidate's business positions and interests by providing information about financial dealings, such as investments, donations, business relationships, assets and possible conflicts of interests.

Trump has made clear he does not want to turn over his tax returns, claiming he cannot disclose them as a result of being audited by the IRS. However, an audit does not prevent a taxpayer from releasing his or her own tax documents. The administration has indicated it plans to fight congressional requests for information about the president's finances.

Mnuchin, for his part, has fought to protect the president's financial information from public disclosure, arguing the request to turn over his returns would create a dangerous precedent. Democrats, meanwhile, have argued the power for lawmakers to seek the returns is written explicitly in a 1924 law. They have also argued they need to see the president's returns to ensure the IRS was conducting audits properly.

Mnuchin on Wednesday said the tax scuffle was "a very important issue that has a precedent way beyond any one president and Congress."

"There is a difference in interpretation between Congress and us and the Department of Justice around this law that not only impacts this president and this Congress but has a very big impact on every single taxpayer in weaponizing the IRS," Mnuchin said. "And this is why there are three branches of government."

He also said Congress did not need to see the president's tax returns to ensure the IRS was fairly enforcing the law.

"Congress has a legitimate interest to make sure that the IRS is performing the function properly as it relates to any taxpayer," Mnuchin said. "This is a very important issue that has a precedent way beyond any one president."