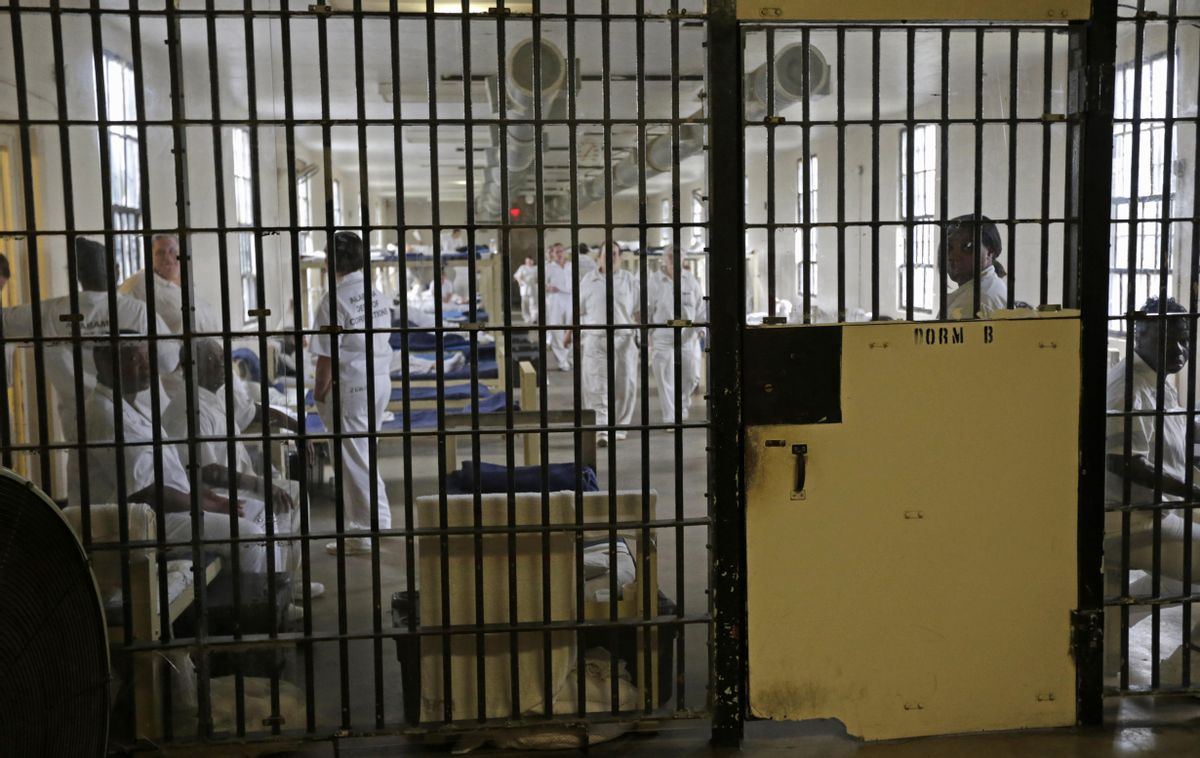 This article was originally published on Waging Nonviolence.

In 1870, abolitionist Julia Ward Howe issued her Mother’s Day proclamation: a call for mothers across the United States to end war.

It was five years since the end of the Civil War and the passage of the 13th Amendment, which banned chattel slavery with one notable exception: involuntary servitude is allowed as punishment for a crime.

Nearly 150 years later, Howe’s dream of ending war has yet to become a reality. And the 13th Amendment has become more significant as, over the past 40 years, the number of people being sent to prison has skyrocketed. But accompanying these soaring numbers have been calls for abolition of another kind — to abolish prisons. It’s a call that’s been gaining traction and popularity over the past decade.

Among the numerous tactics taken by abolitionists is one focusing specifically on mothers, particularly mothers of color, who have been hard hit by both poverty and tough-on-crime policies. It also challenges the country’s bail system, in which people who cannot afford to pay bail must stay in jail for months — and sometimes years — as their cases slowly wind their way through the court system.

When a person appears in court after being arrested, the judge has the option to release them, jail them until trial or set bail, which is a monetary amount that they or their family will have to pay. The reasoning behind bail is not that the person is deemed a risk to themselves or their communities. Instead, it’s based on the logic that, by paying a certain amount, the person is more likely to return for subsequent court dates. If they fail to appear, they forfeit that money. But in reality, bail serves as a two-tiered system in which people with money are allowed to prepare for their court date at home, while those without money must languish in jail.

On any given day, 462,000 people (of all genders and races) are held in jail pretrial, meaning that they are currently awaiting their day in court. The majority are jailed simply because they cannot afford to post bail — or a money amount assigned by the judge ostensibly to ensure that a person returns to court.

Being jailed can mean the difference between an acquittal or a conviction. Being in jail prevents a person from meeting with their attorney, showing up to court in their own clothes, or gathering evidence or witnesses that could bolster their defense. People in jail are more likely to plead guilty; 94 percent of state convictions (and 97 percent of federal convictions) are because of plea bargains.

But even a few days in jail can result in losing one’s job, housing and even custody of one’s children.

In the United States, #FreeBlackMamas is entering its third year. The idea started with Mary Hooks, the executive director of Southerners for New Ground, or SONG, an LGBTQ organization. Hooks proposed a mass bailout of black mothers in time to spend Mother’s Day with their families instead of languishing in jail cells. The call spread across the country and over a dozen organizations — from reproductive justice groups to organizations focused on mass incarceration and criminalization — took up the call. They raised awareness about bail, as well as funds needed to pay it. Then they sat in courtrooms, clerks’ offices and jail waiting rooms — sometimes for hours on end — in order to post the bail that would allow mothers to be home with their families in time for Mother’s Day.

The number of women in jails across the United States has increased 14 times between 1970 and 2014. Of those women, 44 percent are black (though black women make up only 8 percent of the country’s population). Eighty percent of women (of all races) are also mothers.

In 2017, #FreeBlackMamas organizers raised over $1 million in two months, enough to post bail for 106 mothers nationwide. Not only did they bail these mothers out of jail, but they also connected them with support services — such as housing and counseling — while also providing transportation to their follow-up court dates. Their efforts sparked other bailouts, including a Father’s Day bailout and a Black August bailout, which freed 71 other people. In October 2018, the Robert F. Kennedy Center for Human Rights launched a two-week bailout of women and minors held pretrial on Rikers Island. They spent over $1.2 million posting bail for 105 people, ages 16 to 62 with bails that ranged from $750 to $100,000.

This year, groups and organizers in 17 different states — including New York, Georgia, California, Mississippi, Colorado and Texas — have committed to bailing out black mothers before Sunday. Each group has its own fundraiser and many have already raised tens of thousands of dollars. So far, 70 mothers have been freed in 22 cities.

In New York City, VOCAL-NY — a grassroots organizing group of people affected by HIV, the drug war and mass incarceration — has already posted bail for three women. The group noted that one mother was five months pregnant and might have faced the possibility of giving birth behind bars. Another had a $2,500 bail set for shoplifting. The third had a bail that took 24 hours to process. In Philadelphia, organizers have bailed out seven black mothers.

Bailouts aren’t limited to Mother’s Day or holidays. In some states, organizations have arisen to bail people out all year round. The Massachusetts Bail Fund has been posting bail for the past six years. In April alone, they paid nearly $48,000 to bail 100 people out of jail. Their efforts have also brought the need to eliminate cash bail into conversations about criminal justice, including in Boston’s recent prosecutorial race. The winner, Rachel Rollins, signed onto a letter calling for the end of cash bail. She also promised that her office would decline to prosecute 15 low-level crimes, though organizers say she has yet to keep that promise.

“We’ve changed the conversation in Massachusetts, period,” said Bail Fund organizer Mallory Hanora. In other words, the collective and sustained effort of groups such as the Bail Fund and Families for Justice as Healing — an organization of formerly incarcerated women in the Boston area — has made cash bail impossible to ignore in criminal justice conversations.

At the same time, organizers’ efforts have brought more people into conversations about bail. They’re teaming up with Wee the People, an anti-oppression education program for children, for this year’s Black Mamas’ Bailout. The collaboration isn’t just fundraising and posting bail. It’s also discussing with the program’s youth about the incarceration of mothers and grandmothers, as well as the federal Dignity for Incarcerated Women Act, drafted with input from formerly incarcerated women and aimed at improving conditions in women’s jails and prisons.

Across the globe, in Western Australia, formerly incarcerated women and prison abolitionists have been challenging another way in which people, particularly Aboriginal women, are jailed for lack of money. In Western Australia, people are jailed for unpaid fines. These fines can be for actions as insignificant as not registering a pet dog or getting on public transportation without a ticket. But then there are additional fees and costs added to the original fine, which can bring it from the low hundreds to the low thousands of dollars. No payment plan is allowed — the debt must be paid in full. If a person does not — or cannot — pay, the fine becomes a warrant. Every $250 owed becomes a day spent in jail. Western Australia is the only state that jails people for unpaid fines, and the majority of people jailed are Aboriginal women.

In 2014, the practice briefly made headlines when Ms. Dhu, a 22-year-old Aboriginal woman, died while jailed for $3,362 in unpaid fines. She would have had to spend 14.5 days in jail, but she died two days after her arrest.

In January 2019, Sisters Inside, an organization that works with women in Australian prisons, began their #FreeThePeople campaign. Organizers identify women who are either currently jailed or at risk of being jailed for unpaid fines. Then, they pay those fines.

How do they find these women? First, they put word about the campaign to Aboriginal elders, Aboriginal organizations and non-governmental organizations, asking them to help identify women with unpaid fines. Sometimes the groups will give them names — other times, the women will contact them directly. Once they have their names, they begin the process of paying the fines so that arrests don’t happen or the women can go free. (Unlike the U.S. bail system, payment for these warrants can be done over the phone or online.)

As of mid-March, 10 weeks after beginning the campaign, Sisters Inside had already paid the fines for over 100 women. Some of these fines aren’t cheap: “It’s worked out to an average of $3,300 [to] $3,500 per woman,” said Deb Kilroy, the director of Sisters Inside and founder of the #FreeThePeople campaign. But some are much more. Kilroy recounted the story of one woman, a 23-year-old fleeing domestic violence with three children under the age of six, who had more than 10 fines adding up to $8,100. But with $9,500 in additional fees and costs, she was looking at paying $17,500 or spending 70 days in jail. Neither was an option she could afford.

“I’ve spoken to Aboriginal mothers who’ve had their fines paid in full,” Kilroy tweeted. “I told them they can’t be arrested. They cheered, screamed & cried. They’re overwhelmed at donors’ generosity. One even asked, ‘What’s the catch?’ To which I said ‘No catch you’re free.’”

#FreethePeople has raised over $391,000 over the past four months. But here’s the catch: In the United States, bail fund organizers can expect most, if not all, of the money posted for bail to be returned once the person completes their court case. (In some places, a non-refundable administrative fee is taken out of the bail amount.) In Western Australia, however, the court-imposed fines, fees and costs are non-refundable, meaning that Sisters Inside must constantly be raising money to keep women out of jail.

That could be a Sisyphean task if not for the second prong of the #FreeThePeople campaign — advocating to abolish the practice, something that other Australian states have already done. People who donated to #FreeThePeople are encouraged to email the state’s attorney general, John Quigley, to repeal this law. Nearly every one of the 8,000 people who donated during the first two months did so. In response to the flood of emails and the media attention raised by the campaign, Quigley’s office has said that a set of reforms to the law will be introduced in July 2019. Meanwhile, Sisters Inside continues to raise funds and reach out to Aboriginal organizations to pay for women’s freedom.

In the United States, black mothers who had been freed through #FreeBlackMamas in previous years traveled to Tulsa, Oklahoma, in September to participate in a convening of the National Council for Incarcerated and Formerly Incarcerated Women and Girls. They gathered on stage for the Sunday morning plenary to talk about the importance of being bailed out of jail, of being able to fight the charges against them from the outside, and of not being torn away from their children and loved ones. One mother talked about finding a year-old flier about the Mamas Day Bailout. She called her mother and asked her to call the number listed. The following week, she was bailed out and came home one day before her son was murdered. If not for the bailout, she would not even have had that last day with him.

Some had never been involved in political advocacy before being bailed out. Now, every one of the women on the stage was deeply involved in anti-prison work, including participating in and organizing this year’s bailouts.

Victoria Law is a freelance writer and editor. She frequently writes about gender, incarceration and resistance. She is the author of "Resistance Behind Bars: The Struggles of Incarcerated Women" and the co-editor of "Don't Leave Your Friends Behind: Concrete Ways to Support Families in Social Justice Movements and Communities."