As a gay Christian, Pete Buttigieg's visibility gives me strength

They said I couldn't be a Christian and gay, but I never lost my faith. These attacks on Pete make me stand taller 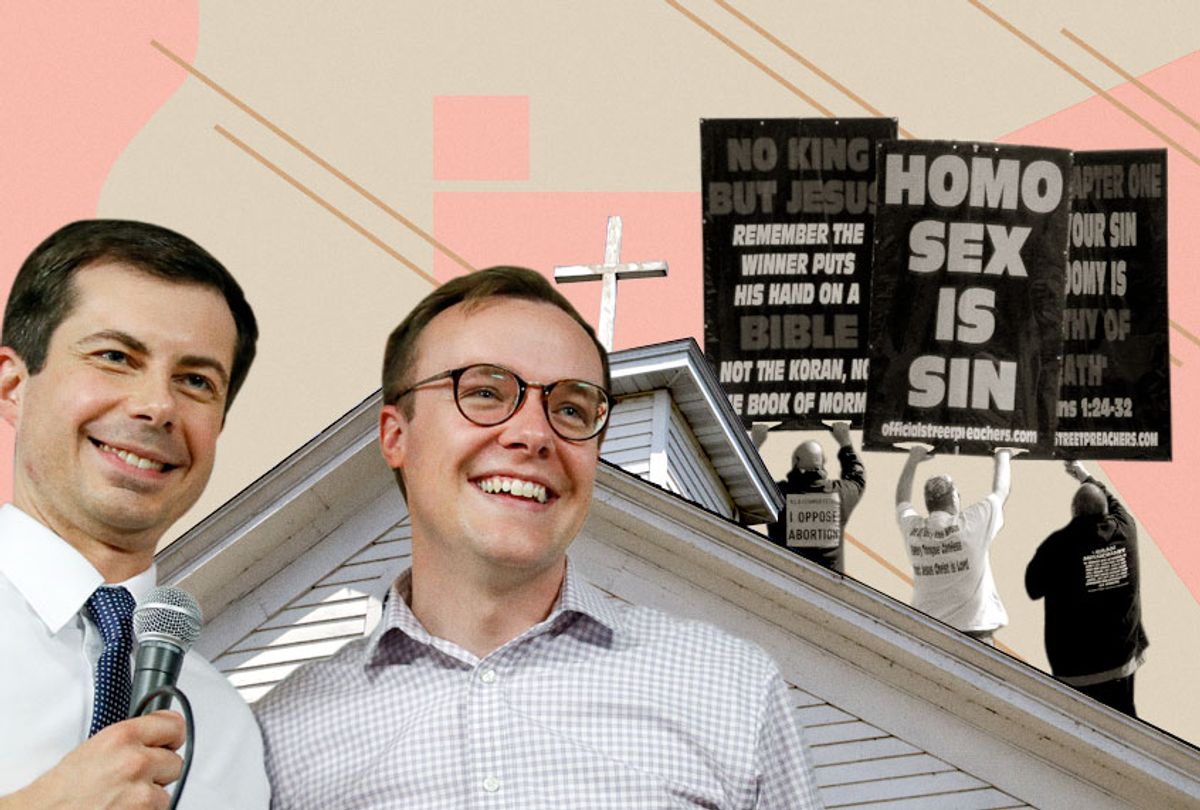 The pastor was thundering from the pulpit of our small evangelical church.  Red-faced, dress shirt soaked with sweat, fist slamming against the lectern as he paced back and forth. For the last half hour he had been shouting about Sodom and Gomorrah and he landed on his conclusion that gay people were going to burn forever in the lake of fire.

What most troubled me in the moment is that all of these people around me, whom I knew to love me so well, were nodding in agreement.  They were shouting out amens and raising their hands in praise. Some of them even stood to applaud. I realized that if they knew what I was hiding about myself, they would stop loving me immediately.

Even then I knew the constant homophobia was backed up by just about every preacher in our community, as well as the ones who were always on television:  Billy Graham, so often at the elbow of every president, telling LGBTQ people they’d be “judged by God’s holy standard.” Jimmy Swaggart, a hero to practically everyone I knew, who once said he’d kill any man who looked at him “like that.” Pat Robertson and Jerry Falwell both blamed the terrorist attacks of 9/11 on “the gays”.

Although my entire community, and the larger culture, was telling me that God didn’t want my kind in his churches, belief burned in me, and no one ever could put it out. Being a believer was nearly as innate to me as being gay.  It’s just who I was, and no matter the slurs and constant reminder that I couldn’t be a Christian and a gay person, I never did lose my faith.

Nearly 30 years after walking out, I found solace in the Episcopal church, where I was delighted to see people of all kinds kneeling to take the Eucharist, and witnessing the rector and the congregation openly embracing LGBTQ people during the service and in everyday life.

Although there has been progress, all these years later, those with the biggest platforms are still attacking LGBTQ Christians and saying we are not worthy of God.  Presidential hopeful Pete Buttigieg, who is an openly gay married man and an Episcopalian, is at the center of this conversation. Over the last couple of weeks his faith has been called into question repeatedly because he is gay. Vice President Mike Pence was among the first. “My family and I have a view of marriage that’s informed by our faith,” Pence said about Buttigieg, in essence declaring that Buttigieg’s faith doesn’t matter, or perhaps even that Buttigieg isn’t a Christian.

Evangelist Franklin Graham offered that Buttigieg would be punished by “eternal damnation.” Everett Piper, president of Oklahoma Wesleyan University weighed in by saying “you don’t get to make up your own Christianity.” Talking head Erick Erickson attacked not only Buttigieg but also the Episcopal church. Michael Brown, a leader of the Charismatic movement, put forth that “As an out-and-proud gay man, Buttigieg must discard the entire testimony of Scripture.”

This is not only suggesting that Buttigieg is not worthy of his own faith — it is also homophobia. These men have done exactly what they set out to do: get other homophobes riled up. Recently, Buttigieg was interrupted by hecklers at an Iowa rally who chanted “Sodom and Gomorrah!” and “You betray your holy baptism!” Social media is filled with endless discussion of Buttigieg’s “depravity,” “perversion,” and so on. At another event Operation Rescue founder Randall Terry showed up dressed as Buttigieg and whipped a man dressed as Christ while someone in a Satan costume shouted “Yes, more blood, Peter!” among other taunts. Terry told the Associated Press he was doing it because Buttigieg “glorifies and normalizes a sinful behavior.” Protesters yelled “Repent!” and “Marriage is between a man and a woman!” while the candidate tried to address a packed audience in Dallas last Friday.

The thing that none of them realize is that every time they allow their judgement to rear its head, support for Buttigieg grows even stronger among many potential voters. And every time his sincerity as a gay Christian is questioned I feel as if my own faith is strengthened. Whenever they attack the Episcopal church I’m prouder to be a member. Each time his marriage is held up as an act of depravity I cherish my own marriage even more.

There is a point where bullying and judgement backfire.  That’s what happened when I walked out of that church at 16 years old, devastated to lose the only community and culture I had ever known so intimately, but emboldened by the realization that I was standing up for what I believed in.

Studies show that while homophobia and hate crimes against LGBTQ people still abound, the tide has changed over the last couple of decades when it comes to the way Americans think about these issues.  A recent poll conducted by Quinnipiac University found nearly 70% of Americans claiming they are open to electing a gay president. However, only 36% think the country is ready for it.

I’d like to think that most Americans, like LGBTQ people, are tired of the bullying and name-calling and are ready to stand up for what they believe in, too. Polls, however, show one thing, and electoral votes have revealed another with the majority voting in a transphobic president and a vice-president who is perhaps best known for his anti-LGBTQ initiatives.

For now, Buttigieg is among the most popular of the wide field Democratic presidential candidates.  He and his husband have graced the cover of Time magazine and dozens of other publications. Analysis of campaign finance reports show that so far, Buttigieg and Kamala Harris are doing a better job of poaching donors from their opponents than other candidates in the 2020 primary race.

The boy I used to be could have never imagined the day that a gay man is being seriously considered as a candidate for president. He would have been amazed to know Buttigieg is also standing up for the fire of belief that burns in us both. Sometimes I wonder how we kept going, how we survived it all. Then I wonder if the very people who set out to break us aren’t the ones who ended up making us that much stronger.