U.S. has negotiated with Taliban leaders largely on their terms — and now Trump wants us to pay their travel bills 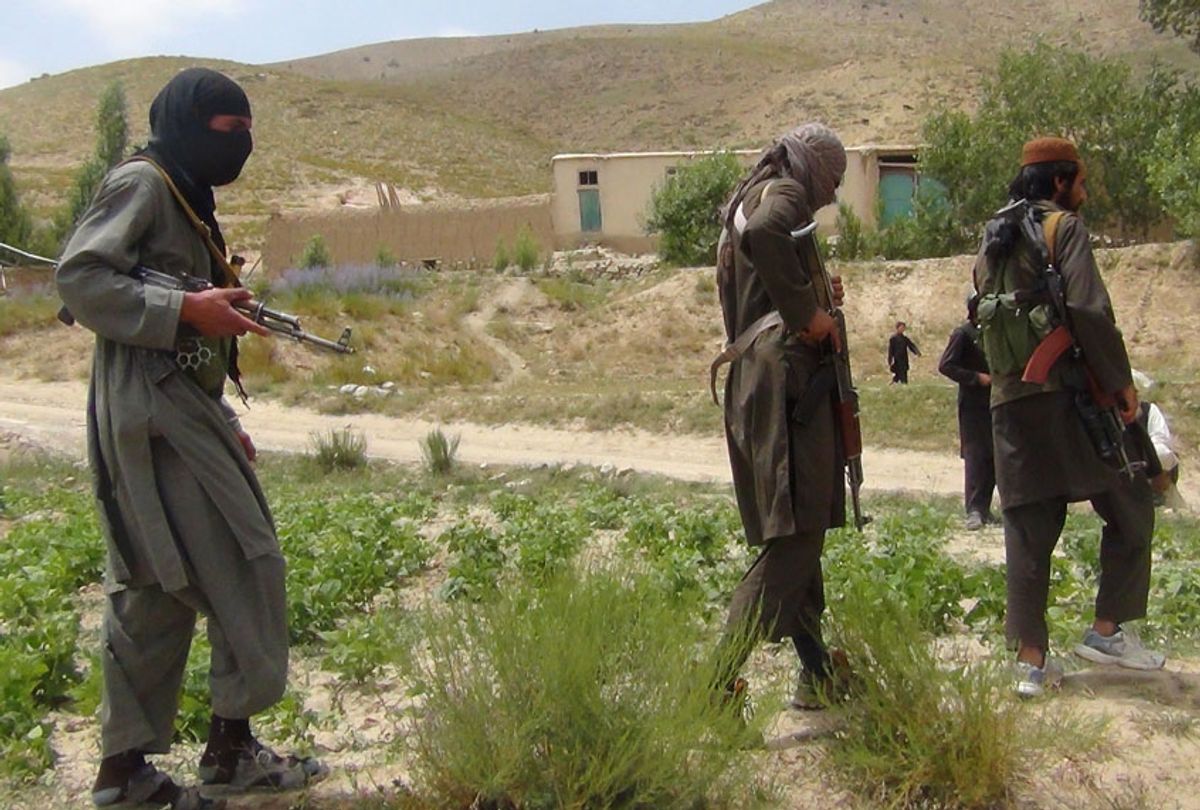 Fighters with Afghanistan's Taliban militia walk with their weapons in Ahmad Aba district on the outskirts of Gardez, the capital of Paktia province, on July 18, 2017. (Getty/FARIDULLAH AHMADZAI)
--

The Trump administration has asked Congress to authorize funds to reimburse the Taliban for its travel expenses — or at least for those the extremist group incurs during peace talks, according to the chairman of a key defense appropriations subcommittee.

Pentagon officials told Congress they have already used taxpayer funds to reimburse the Taliban for expenses like travel, lodging, food and supplies. They have requested more such funding this year, Kevin Spicer, a spokesman for Rep. Peter Visclosky, D-Ind., who chairs the House Appropriations Subcommittee on Defense, told Roll Call.

“The Defense Department requested fiscal 2020 funding to support certain reconciliation activities, including logistic support for members of the Taliban and, in March 2019, they sent a notification letter to the Committee on using fiscal year 2019 funds for similar activities,” Spicer told the outlet.

Spicer said the administration’s request to funnel money to extremist group “would implicate provisions of law concerning material support to terrorists, the Taliban’s ongoing offensive operations against U.S. service members, and their continuing lack of acknowledgement of the government of Afghanistan or the rights of women in Afghan society.”

The subcommittee rejected the administration’s request, passing a $690 billion defense spending bill Wednesday that explicitly banned the Pentagon from using any of the funds to reimburse the Taliban unless the government meets certain conditions. For example, the Taliban has refused to hold talks with U.S. negotiators unless Afghan government officials are excluded and members of Congress have expressed concern about the exclusion of women.

“None of the funds made available by this Act may be used to pay the expenses of any member of the Taliban to participate in any meeting that does not include the participation of members of the Government of Afghanistan or that restricts the participation of women,” the committee’s provision says.

Critics of the move also noted that the Taliban, which still controls roughly half of Afghanistan's territory and remains closely linked to al-Qaida, is not struggling financially despite years of endless war. The group is estimated to earn $800 million per year from Afghanistan’s opium trade and U.S. officials have said drug money funds most of the group’s activities, Roll Call reported.

Steve Ellis, executive vice president of Taxpayers for Common Sense, told the outlet the Trump administration’s request is like “life imitating The Onion.”

“Even if you leave aside that [the Taliban] are still conducting operations against our interests and allies, having to pay for someone to be at the table undercuts our bargaining position and demonstrates their lack of enthusiasm for a deal,” he said. “I’m sure the Taliban would like whatever cash we’re willing to give them, but it’s not like they aren’t able to continue funding their fighting. How about using some of that cash instead of American taxpayer dollars.”

The Trump administration has held six rounds of peace talks with the Taliban in Qatar since last fall, all of which have excluded Afghan government officials. Foreign policy experts have said that the exclusion of the Afghan government, along with early reports emerging from the peace talks, suggest that the Trump administration “seems poised to give away everything America has fought for in Afghanistan since 9/11.”