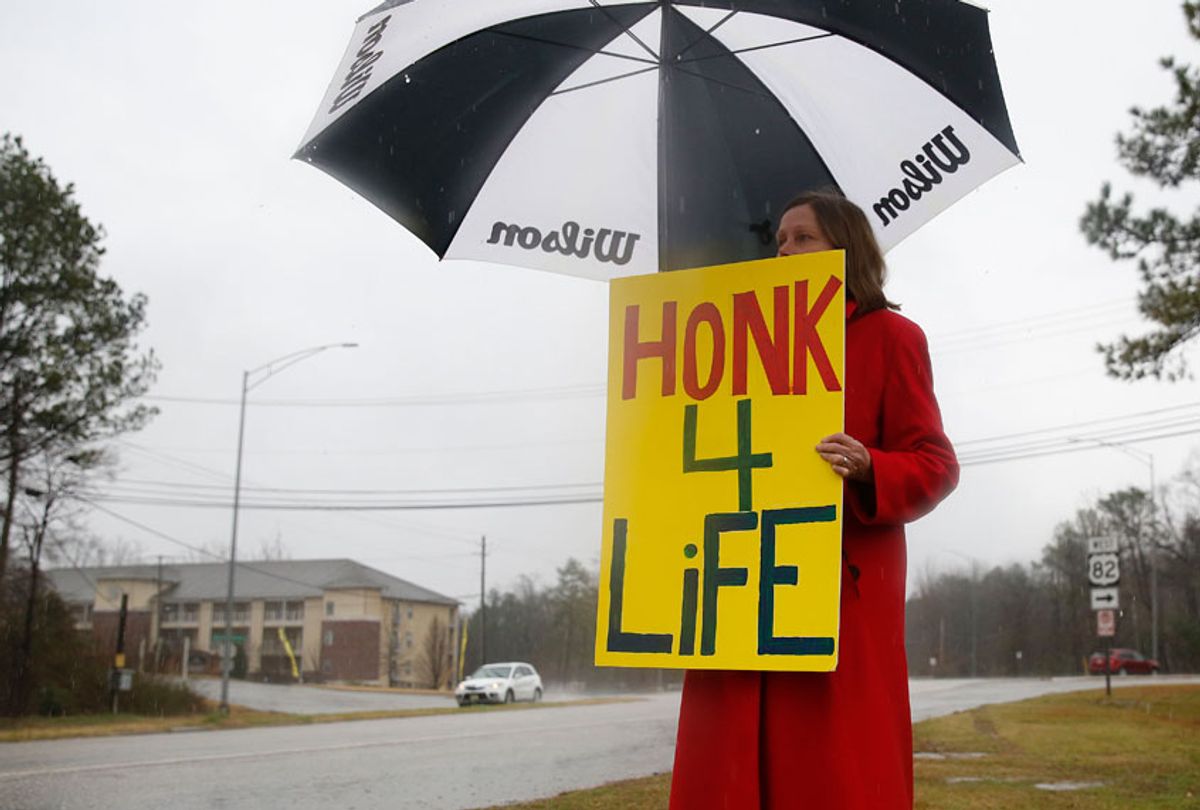 In this photo taken Feb. 22, 2016, Ellie Hermann, stands near the street, protesting the West Alabama Women’s Center, in Tuscaloosa, Ala. (AP/Brynn Anderson)
--

You’ve passed the worst version of an unconstitutional law of the several states targeting the abortion issue with a law that cynically is meant only as a tool to tee up the dispute in hopes that the Supreme Court will rewrite history and overturn Roe v. Wade.

The real trouble is, that these senators might be right. There is no time since the 1973 Court decision in which the principles of Roe have seemed so much in trouble.

Along the way, several thousand women will be hurt, of course; about 6,000 women had abortions last year in Alabama, not counting anyone who may have gone to a neighboring state. But then there are only four women in the Alabama State Senate.

The state senate made sure even to reject instances of rape or incest in eliminating and criminalizing abortion. The law passed would send doctors to jail for 99 years for performing an abortion.

It’s all in the name of the Right to Life banner, celebrating the sanctity of all human life. The problem is that no one wants to look at what happens to 6,000 unwanted births a year in Alabama or to 6,000 women who already underwent an agonizing decision that they needed to abort.

The Alabama Senate is not immediately recognized as a governmental body that is quick to look for ways to improve public schools, or provide health care or early childhood services that would assure a healthier life, or to provide more food stamps for poor families or affordable housing.

The wider pro-life, anti-abortion movement is not necessarily aligned with protests about ripping babies from the arms of migrants on the border or for seeking to improve services for children or for opposing death penalty legislation – all “pro-life” positions. These movements too often also spawn anti-vaccine campaigns, oppose stem-cell medical research and turn national politics into a referendum on this single issue.

All for a Supreme Court Case

It’s all a sham to create a perfect vehicle in hopes that a Supreme Court made conservative-leaning with two Donald Trump appointees will undo Roe and eliminate abortion rights.

Hey, let’s not stop with abortion. Let’s rewrite the full gains of the last 100 years or so. It’s not too late to take away the vote from women, or to overturn the end of Prohibition or to wipe out child-protection work laws. Let’s get rid of Civil Rights legislation, erase the creation of an Environmental Protection Agency, and roll back same-sex marriage.

What’s the point of asking Supreme Court nominees if they recognize the status of “settled law,” of “stare decisis” protocols. Just this week, the conservative wing of the court decided to throw out a 40-year-old court protection involving inter-state lawsuits in allowing a class action to proceed against Apple. As Justice Clarence Thomas said in effect, what’s the point of upholding a law that was wrongly decided at the time?

So Much for ‘Activist’ Judges

Can there be a better set-up for Alabama to ram home a bill that expressly contradicts federal law, just to allow it to become the vehicle for rewriting abortion history? So much for conservative insistence on judges who are not “activist” and who “create” law.

“This bill is about challenging Roe v. Wade and protecting the lives of the unborn because an unborn baby is a person who deserves love and protection,” Alabama Republican state Rep. Terri Collins, the sponsor of the bill, said after the vote Tuesday night. “I have prayed my way through this bill. This is the way we get where we want to get eventually.”

In all, 16 states have passed or are working to pass bans on abortion after a doctor can detect what they call “a fetal heartbeat in the womb,” usually at about six weeks, before many women know they are pregnant. That includes Georgia, where Republican Gov. Brian Kemp signed a “heartbeat bill” into law on Tuesday.

Meanwhile, in Rhode Island, the Senate Judiciary Committee voted 5-4 against a bill that would go the opposite way, permanently enshrining Roe in state law.

The thing about women’s rights, about civil rights, about better treatment for individuals is that it is a long-term challenge that is cumulative over years. Advocates for a more tolerant society understand that the challenge is a lifetime commitment.

The wishful thinking of returning to “good ol’ days” of a much more restrictive society is prospering in the Trump era.