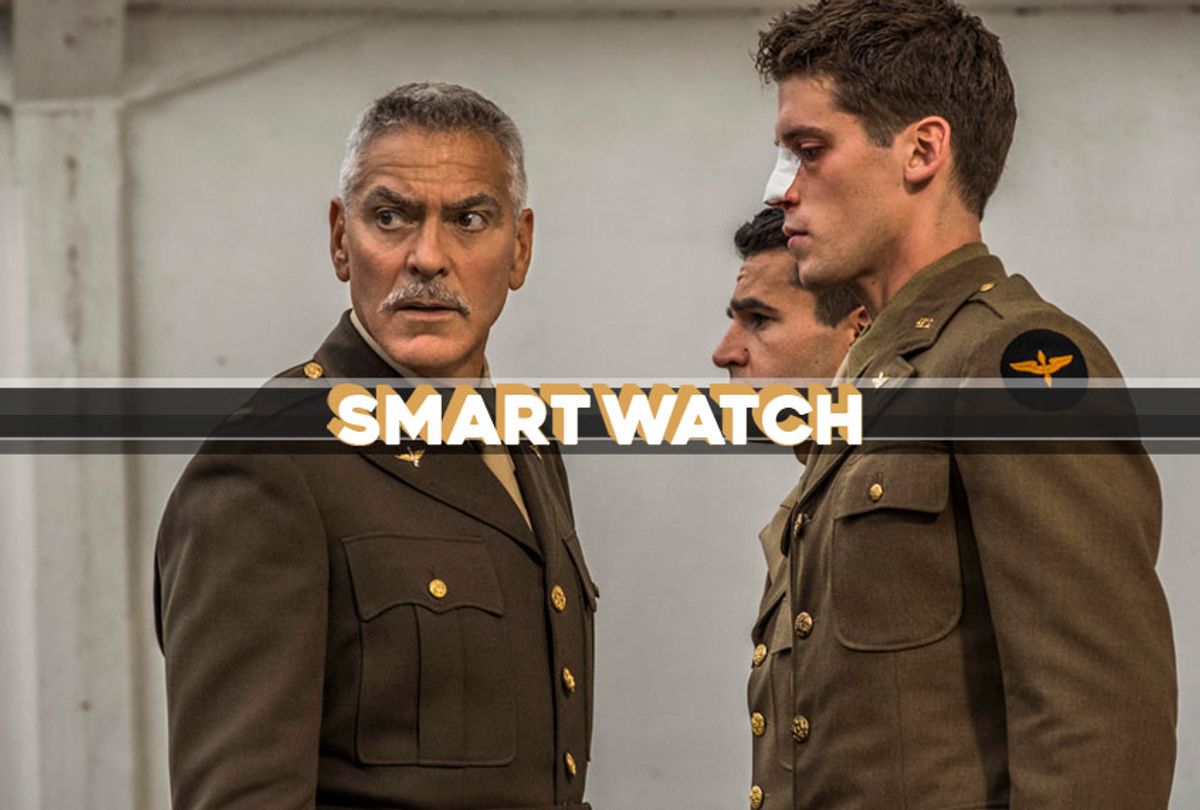 Nuance, detail, feeling — these and other tough-to-capture elements tend to get lost in translating a book’s story to the screen. When the literary work is a chronological jumble designed as a satire, a demonstration of war’s absurdity and the sheer insanity driving the men who fight in it and those prosecuting it, it’s to be thought of as “unadaptable.”

Joseph Heller’s “Catch-22” was long thought of as such, and Mike Nichols' 1970 theatrical attempt to do so is held up as proof sometimes. That isn’t quite fair, given the youthful Alan Arkin as the film’s disillusioned and selfish protagonist John Yossarian.

George Clooney and Grant Heslov’s six-episode version for Hulu doesn’t have the cultural proximity problem of its cinematic predecessor, which was released in the same year as the Oscar-winning “M*A*S*H.”   Instead its primary struggle is with consistency of feeling, the main flaw in a production that otherwise surmounts the foremost challenges presented by Heller’s writing structure.

Then again, maybe it's our times. The modern viewer has absorbed the stories of this era through the viewpoint of HBO miniseries like “Band of Brothers” and “The Pacific” along with Ken Burns’ World War II documentary series, not to mention the man-films and non-fiction treatments of the Vietnam War and other conflicts. All of these focus on the bravery and spirit of sacrifice that drive a soldier on top of the needless tragedy and surreal nature of armed conflict.

“Catch-22,” based on a very funny and bleak novel whose slot was long assured on many a high school’s required reading list, mainly aspires to be a dark-as-pitch comedy strafed with reminders that war is a hell that makes absolutely no sense.

Yossarian, played here by Christopher Abbott of “Girls,” asks the viewer to decide whether he is a coward. Trapped in a taxing situation in which superiors demand he put his life on the line, preaching bravery and a stiff spine to survive, Yossarian is understandably gripped by his fear and instinct for self-preservation.

These are the natural human reactions a bombardier faces every time he’s seated in the fishbowl-like nose of a plane sent out on a mission to drop tons of explosives on people and places he’ll never see, explosions barely missing him. When he visits the base’s physician Doc Daneeka (Heslov, doing his best Marx brothers impression) and begs him to declare him mentally unfit for combat, who can blame him?

The response Daneeka provides, which gives the book its title, is truly crazy-making. In order for a doctor to declare a man mentally unfit for combat, under military rules all the man has to do is ask. However, the very fact that he wants to gets out of combat means he’s not crazy.

“That’s some catch, that Catch-22,” Yossarian says. Daneeka agrees: “It’s the best there is!”

As we tag along with the stories of several airmen in the fictional 256th Squadron, stationed in the Mediterranean during World War II, the audience is treated to a few good comedic performances, including Abbott’s, who metabolizes his character's panic and selfishness into some version of charm.

Others miss the mark entirely, or aren’t memorable enough to make much of an impression at all. This is a series populated with a very large cast, but unlike other war-themed miniseries that came before it, only a few up-and-coming actors receive an opportunity to shine here.

David Daniel Stewart, who makes the profiteering endeavors of mess officer Milo Minderbinder into screwball tap dances each time he comes onscreen, is a standout. On the other end of the spectrum, I nearly forgot Hugh Laurie’s presence entirely.

Some of the weakness is in the writing. Luke Davies and David Michôd maintain much of the novel’s memorable prose while ironing out the time structure to create an orderly flow to the narrative that gets around Heller’s verbal aerobatics. Where that fails the test is in jokes that read better than they are spoken; Lewis Pullman’s Major Major Major Major provides an early example of botched execution in that regard since he has to explain why his name and very existence is a joke.

But the golden-lit visuals captured by cinematographer Martin Ruhe makes the highest use of the Italian countryside where production takes place, creating such a gorgeous counterpoint to the horror and lunacy of the squadron’s mission creep that the series’ flaws, though tangible, are also easily forgiven.

Clooney and Heslov directed two episodes each, with Ellen Kuras helming the others, and the influences from certain corners of Clooney’s filmography show up throughout “Catch 22,” perhaps most obviously in his screwball performance as training commander Colonel Scheisskopf, who is a bit too obsessed with the marching drills he assures the men are crucial to the war effort.

Reportedly due to scheduling constraints Clooney appears in “Catch-22” just enough to sell it, leaving most of the duty to carry “Catch-22” to Abbott and Kyle Chandler, whose cruel and abusive Colonel Cathcart burns with enough shuddering viciousness to make the audience understand why the escalating expectations he places on these men rightly drive a few to the edges of sanity.

Without Clooney stealing all the sunlight Chandler’s forceful performance deserves some Emmy notice. But the lack of effectively written and delivered humor in “Catch-22” downgrades it from a flawless flight to merely a very good one. The adaptation misses a few of Heller’s main targets, but hits enough of the notes to make it a worthy undertaking.

In case you haven’t heard, Phoebe Waller-Bridge’s other creation “Killing Eve” is in the midst of a creatively disappointing second season. Its fans feared as much when Waller-Bridge handed the reins to her friend and fellow writer Emerald Fennell, who kicked off the season well but slackened some of the plot’s tension as new chapter unfurled.

If Waller-Bridge failed to deliver a follow-up to her aggressively wonderful first season of “Fleabag,” in which she stars on top of writing, one might wonder what the point was in having two great series suffer. But there’s no such need, given the absolutely masterful execution of the comedy’s sophomore run, an example of brilliance slathered on brilliance.

The first season of “Fleabag” is a deceptive romp that slowly pulls back the curtain to reveal that is nameless heroine (Waller-Bridge) is putting on a show designed not only to convince us of how cool, sexually liberated and above convention she is, but to mask her internalized self-hatred.

Season 1’s finale isn’t just a twist but an outright flip of a season presented as a comedy into a psychological plummet into despair.

Now she can only be honest while using the guilt and shame imposed upon her by others in the service of good, a turn that yields mixed rewards as we see in the second season’s opening scene: her bloody nose coats the lower half of her face in scarlet, and she gingerly wipes it clean with a cloth. Then, at the very last moment, she turns to the camera with her vixen’s grin and inform us that we’re about to watch a love story.

These new episodes — and sadly, the final ones of this series — transform the character’s self-damnation into a study of judgement in every sense of the word.

To sell her character’s trickery Waller-Bridge brings the central convention of her one-woman show into the series’ direction, frequently breaking the fourth wall to make the viewer her confidante and confessor. In these new episodes this device no longer shields her in the way it once did. The jig is up, as they say.

Guilt, shame, confessor . . . those terms are used with purpose. More than a year has passed since we’ve spent time with this woman, ample time for her to make a few changes, not that it makes a difference. Or does it?

Season 2 of “Fleabag” introduces a Catholic priest played by Andrew Scott who is that fatal combination of foul mouthed, celibate and dead sexy. He’s getting to know her father (Bill Paterson) and marvelously awful stepmother (Olivia Colman) as a prelude to officiating their marriage.  Her sister Claire (Sian Clifford) still despises her, and her irritating, squealing pig of a brother-in-law Martin (Brett Gelman) is content to let her take the blame for everything that’s going wrong in his life.

Like Season 1 it’s probably best to refrain from going further into plot specifics beyond citing Waller-Bridge’s sublime inquiry into how we define love and loyalty, and the obligations imposed by intimacy. Her writing remains as confident and her humor as cutting as ever — these episodes give us some of the funniest TV moments going right now, and may be the year’s best.

In this scenario Waller-Bridge invites the audience to view her characters and the situations into which they’re dropped with a measure of grace and understanding that ultimately leaves us in a far more benevolent place. Even tawdry sinners are redeemable and worthy of mercy, she seems to be telling us. And if they happen to blaspheme on their way back to the path of goodness, who are we fellow sinners to deny them forgiveness?

The world is going to be split into a number of factions — maybe more than seven — with differing opinions on how well “Game of Thrones” concludes its run. We’re already divided, right?

Instead, let this be a reminder that not every series is ending, or ending badly. “Barry” has kicked out an outstanding second season that should be celebrated much more than we are right now. It’s also a short one that’s easy to catch up with via HBO’s streaming platform. Do not be left totally inconsolable by whatever transpires in Westeros on Sunday, then, because the world is not ending. Bill Hader’s agile comedy is still very much killing it and worth sticking around after the last “Game of Thrones” end credits sequence is finished rolling.