The doctors predict the worst and my thoughts turn to the roasting pan. How oddly we behave at such moments 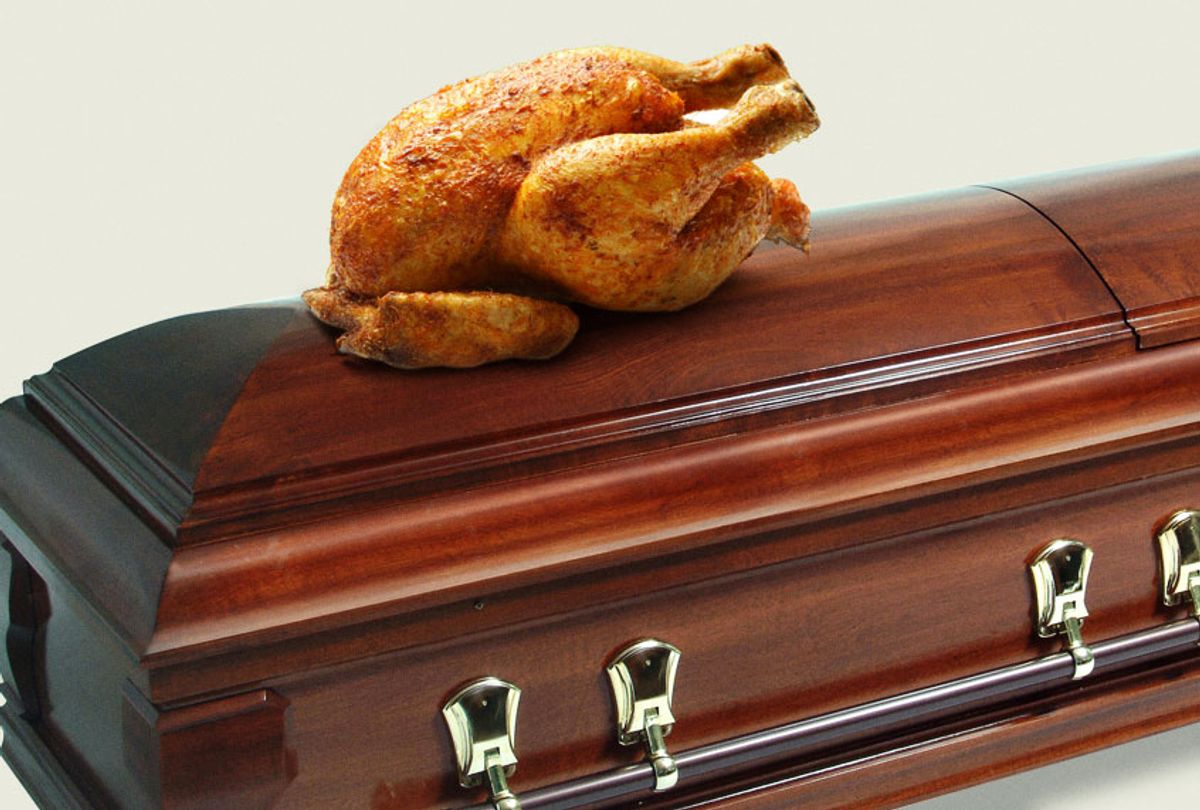 I’m not sure when my fear of flying kicked in. As a kid we flew to England often to visit family and the phenomena of being thirty-five thousand feet in the air over a vast ocean was no worry, especially with the arrival of my airplane dinner. Oh, the thrill of peeling back that foil to reveal compartments of food that under normal conditions my mother would have thrown out.

But by my teens, the thought of getting on a plane terrified me. My fear of flying eventually proved to be a problem since I now had a gig writing for American Airline's inflight magazine. Something had to be done. So I took myself off to see a guaranteed-to-kill-your-fear guru.

Her advice was I should never drink on a flight because that was an indication to my brain that I wasn't in control. And, more importantly, I had to find an image, something that always makes me feel happy and secure. I scoured through my life and came up with the act of putting a chicken in the oven.

My first flight after being "guaranteed" fearless had me feverishly meditating on ramming sixty imaginary chickens in an oven while using every ounce of will power (there's never been an over-supply available) not to lunge after the drinks cart.

Then, one day someone asked if I played the lottery. "No," I sneered.

"I'm not that big an idiot. I know what the odds are, I wouldn’t waste a nickel on that shit."

Lying in bed that night, it occurred to me that I was the idiot. If I wouldn't play the lottery because my chances of winning were minuscule then what business did I have to be afraid that my plane might fall out of the sky. The odds of that happening are apparently much worse?

At least the lottery ticket generates some money. From that day onward I have not been afraid of flying. I rather enjoy it, even the turbulence.

What has stayed with me is that in times of stress, or when I'm feeling depressed, or just in need for that comforting meal, I always think to roast a chicken.

And, it was the simple act of putting a bird in the oven that saved me on the darkest day of my life.

I've been married a long time, more than half my life, which, just in the telling, feels a little enormous in an overwhelming sort of way. I also notice things. My eagle eye catches every unzipped zipper, mismatched sock, missing button or fallen hem. No passing glance or concealed mood escapes my radar.

Once at a dinner party, my host asked us to take a moment to thank his wife for her heroic culinary efforts, and I knew in that instant that he was having an affair.

So it haunts me to this day that I didn't notice that my husband, Charles, was gravely ill. Neither of us did. Friends later confessed that they wondered why he was losing so much weight and why he looked positively grey.

But in the cocoon of our marriage, neither of us had any inkling something was amiss until one evening when we were heading out to get a pizza.

On a slight incline outside our apartment, Charles stopped. He was completely breathless and said he couldn't take another step, that something was wrong.

In a long marriage, something is always wrong. Headaches are brain tumors, gas is the first strain of pancreatic cancer, and a hangover is Epstein's Barr. So I was less than sympathetic and more than a little impatient.

But he stood there looking stricken long enough for me to get scared. "I think this must be pneumonia," he said. I nodded. I mean what else could it be? He was only in his fifties, thin (though even at that moment I didn't notice just how thin) with a good diet and a full head of hair, not that that speaks to health, but I thought I would mention it.

The next day, feeling weaker, Charles went to see our doctor. It was a Thursday. He told her he thought he had pneumonia and she dutifully listened first to his lungs. "Not your lungs," she said, sliding the stethoscope over to his heart.

Doctors are annoying. When he came home and I started peppering him with questions, Charles said he had no clue what was happening because the doctor didn't want to make any diagnosis before she had more information and for that, she needed an ultrasound.

“She didn’t give you any idea what it might be?”

"You did tell her we have no health insurance right? You can't just be getting tests willy-nilly?"

Why we didn't start freaking out there and then I don't know. But we didn't.

The next day I went with him to someplace in downtown Brooklyn for his ultrasound. He disappeared into the back. I disappeared into People magazine. I was reading with intense interest how Valerie Bertinelli had lost forty pounds when I became aware that he was at the counter dealing with the bill, but the ins-and-outs of Bertinelli's diet was so fascinating that I didn't even look up until I heard a hissed "Bex!" and saw him frantically beckoning me.

"What?" I said once we were in the stairwell.

There is a line in Graham Green's book “The End of the Affair,” where Bendrix finds out his beloved Sarah is dying. "How oddly we behave at such moments."

A perfect line. Too true.

Charles was in full-blown heart failure. That was all he had been told. It was Friday afternoon. He wouldn't be able to speak to his doctor until Monday, and there was no guarantee he would even make it that far. And, all I could think to do was look at my watch, check the damn time.

Out on the street with legions of office workers and civil servants rushing past us keen to get home we didn't know which way to turn, what to do. We hadn't even begun to ask the whys and hows. I checked the time again and said, "Let's go to a bar."

Charles nodded, but before we took a step, we thought, no, home. We needed to be home. Dying, like getting engaged or married for that matter, and all you want to do is pull family in around you. In the weeks and months to come, we would learn that a virus had attacked Charles' heart. And, over the coming year, with the help of an amazing cocktail of drugs, he would pull himself back into life and health and has been holding steady for more than a decade.

But that night at home, as he called all of his brothers and sisters, the only thing I wanted to do was roast a chicken. What are the odds?