The great insight of the philosophy of Stoicism: Shaping your character is the only thing under your control 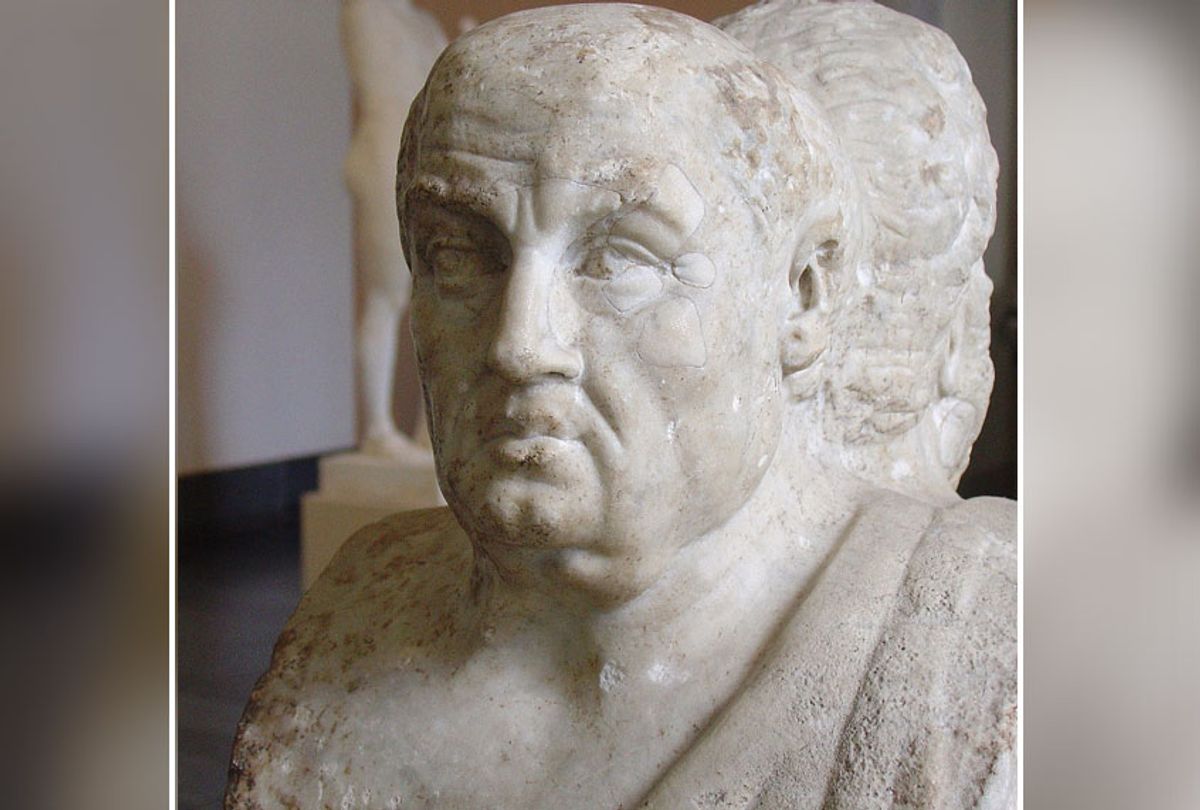 Excerpted from "A Handbook for New Stoics: How to Thrive in a World Out of Your Control" © Massimo Pigliucci and Gregory Lopez, 2019. Reprinted by permission of the publisher, The Experiment. Available wherever books are sold.

Your twenty-five-year college reunion was supposed to be fun. Instead, it turned into an exercise in inadequacy. Your classmates Aziz and Saliah are still together, ever since their first date during sophomore year; your marriage lasted less than five years, leading to financial trouble and an insecurity about romantic relationships that persists to this day. Steve, your former roommate, has maintained his athletic physique while your potbelly has only grown, a charming accompaniment to your thinning hair. And your roommate’s business major propelled him to the C-suite, while you've stagnated in middle management of a company whose products you don’t even believe in. Everywhere you look, you see success, but when you face yourself in the bathroom mirror after the cocktail hour, you can’t help but feel like a failure. No wonder I’m unhappy, you think. It’s because my life is bad. Everything is awful.

The Best Bet for Happiness

There are many things that we want and events we want to happen. We want to lose weight, get a raise, be liked by the people around us. Yet for many of us, these desires never materialize, and we’re left feeling inadequate, frustrated, and stuck. And it can get worse—for all of us. Things we specifically don’t want actually do happen, ranging from trivialities (getting stuck in traffic) to more serious events (illness and aging). Getting what we don’t want can be just as painful as not getting what we do want, and often more so. However painful this is, we keep on placing the same bad bets, staking our happiness and well-being on things outside our control through a cosmic roll of the dice.

What if we were able to train ourselves to desire only things that are firmly within our control? Then, in a very real sense, we’d always get what we want, and never get what we don’t want. Our happiness would never spill, since the cup of our desires is reliable and holds firm.

The fundamental question, then, is: What is in our complete control? What’s the sure bet?

Betting on Character: Why Stoicism?

The unreliability of obtaining certain goals—such as wealth, health, and other people’s praise—is one of many common problems. Often, even when we’re lucky and achieve these ends, we’re still left wanting. Had our fictional protagonist gone to his reunion a successful executive with a family and a still-boyish figure, he would likely still have found room for complaint.

Many of us can see this in our own life. We eat great food without even noticing the taste. When we do savor it, the pleasure quickly fades and is forgotten. We have to shift positions to remain comfortable on a nice, new sofa, which will become stained and worn with time. Status is nice when we get it, but we’re often left wanting more. We get a new car that we love at first, but soon take for granted. We may succeed in starting a business, but protecting our assets and growing the company cause us to lose sleep. We can be head over heels for our romantic partner today, but may grow irritated by their habits with time. Many of the things we pursue don’t satisfy — and can’t provide lasting happiness.

Even if we achieve the objects of our transient desires, it doesn’t guarantee we will use them well. What determines their good use is the character of who’s using them. People with poor character put external advantages—money, fame, the U.S. presidency—to bad use. Those with good character will use what they have, no matter how limited, for the benefit of themselves and others. If they endure hardship, or if the cosmic dice roll snake eyes for them, a good character will help them persevere.

Here is the great insight of the ancient philosophy of Stoicism: Shaping your character is ultimately the only thing under your control. So in order to exploit your good luck and cope with the bad luck, it is necessary to be a good person. Through a combination of rational introspection and repeated practice, you can mold your character over the long term.

Betting on your own improvement is a guaranteed win with the biggest payoff.

Stoicism is a Greco-Roman philosophy that began around 300 BCE with Zeno of Citium (modern-day Cyprus). Zeno was a merchant who lost all of his goods in a shipwreck and arrived in Athens with a few drachmas in his pockets. He heard the keeper of a bookshop reading some philosophy and became intrigued by the subject, so he asked the shopkeeper where he could find a philosopher. He was told to follow a man who just happened to pass by, Crates of Thebes. Zeno listened and became Crates’s student. Eventually, Zeno founded his own school, which came to be known as the Stoa, because its members discussed philosophy under a public colonnade called the Stoa Poikile, or painted porch.

During the last century BCE, Athens declined as a political power and cultural capital of the ancient world, and Rome took up both mantles. Shortly after, many of the prominent Stoic philosophers became active in the capital of the Roman Empire. The four major ones, whose writings survived to this day, are Seneca, a Roman senator and advisor to the emperor Nero; Musonius Rufus, a renowned teacher; Epictetus, a slave-turned-teacher who was Musonius’s student; and Marcus Aurelius, one of the few philosopher-kings in history.

Stoicism dwindled as a formal school of philosophy by the third century CE, but Stoic ideas continued to influence a number of important thinkers throughout the history of the Western world, from Paul of Tarsus to Augustine of Hippo, from Thomas Aquinas to Descartes, from Montaigne to Spinoza. In the twentieth century, Stoicism inspired a family of schools of effective psychotherapy called cognitive behavioral therapy (CBT), starting with Albert Ellis’s rational emotive behavior therapy in the 1950s. The ideas of Zeno, Seneca, Epictetus, and others have also inspired a vibrant movement of new Stoicism in the modern day, attracting people from all over the world, who want to find a better way to live their lives, and to become full members of the human community.

Stoicism’s basic tenets can be distilled into three major topics: live according to nature, three-disciplined practice, and the dichotomy of control.

Live according to nature

“What should we do then? Make the best use of what is in our power, and treat the rest in accordance with its nature.”

The Stoics thought that the best way to live our life, to make it count and derive meaning from it, is to live according to nature, particularly human nature. How do we determine what this means, in practice? By studying three interrelated topics: “physics,” “logic,” and “ethics.” Each of these three terms had a much broader meaning in ancient times than it does today (hence the scare quotes).

By physics, the Stoics were referring to the study of all the natural sciences, as well as metaphysics—the understanding of how the world hangs together. Logic included what it does today, that is, the formal study of reasoning, as well as psychology and even rhetoric more broadly—everything you need to think and communicate well. Ethics was not limited to understanding right and wrong, as it largely is today, but was more broadly construed as the study of how to live with meaning.

To decide how best to live (ethics), one has to understand how the world works (physics) and reason appropriately about it (logic). Which brings us to the idea of living according to nature. The most important aspects of human nature, the Stoics thought, are twofold: that we are social animals (and are then deeply interdependent with other people) and that we are capable of reasoning-based problem solving. So to live according to nature means using reason to improve social living. Or as Seneca put it, “Bring the mind to bear upon your problems.”1 This aspect of Stoicism sets it somewhat apart from other forms of self-help, which focus more on making you feel better. Stoicism tackles this and goes beyond it by helping the practitioner, and the world around them, be better.

How, then, do we live according to nature? The Stoics, and Epictetus in particular, translate this into living by practicing three disciplines: desire, action, and assent.

The Discipline of Desire teaches us what is best to want (or to avoid): What should our goals be? Where do we channel our energy, time, and resources? The Discipline of Action shows us how to act in the social sphere: How should we behave toward others? And the Discipline of Assent helps us arrive at correct judgments about obstacles that life throws at us: Should we be angry at this person? Should we indulge in that pleasure?

Stoicism is roughly one-part theory and nine parts practice. The Stoics were very clear that understanding the philosophy (not that difficult) without putting it to use is a waste of time and energy. Epictetus said, “If you didn’t learn these things in order to demonstrate them in practice, what did you learn them for?”2

The dichotomy of control

The dichotomy of control is the central concept in Stoicism. What is it? Put simply, it’s the idea that certain things are under your control, while others are not. This may seem obvious—and it is—but from this observation stems the foundation of our practice: that we should focus our energy and resources on affecting what we can control, and turn away as much as possible from what we can’t. This, as you may suspect, is much more easily said than done. There’s a crucial difference between understanding something, which we can do by reading and reflecting on it, and internalizing that same thing, which can only be done with repeated practice.

Excerpted from "A Handbook for New Stoics: How to Thrive in a World Out of Your Control" © Massimo Pigliucci and Gregory Lopez, 2019. Reprinted by permission of the publisher, The Experiment. Available wherever books are sold.