In America, we all have sovereignty over our own bodies. Except for pregnant women, it turns out

Only one category of human being is subject to government regulation, according to Republicans. You get one guess 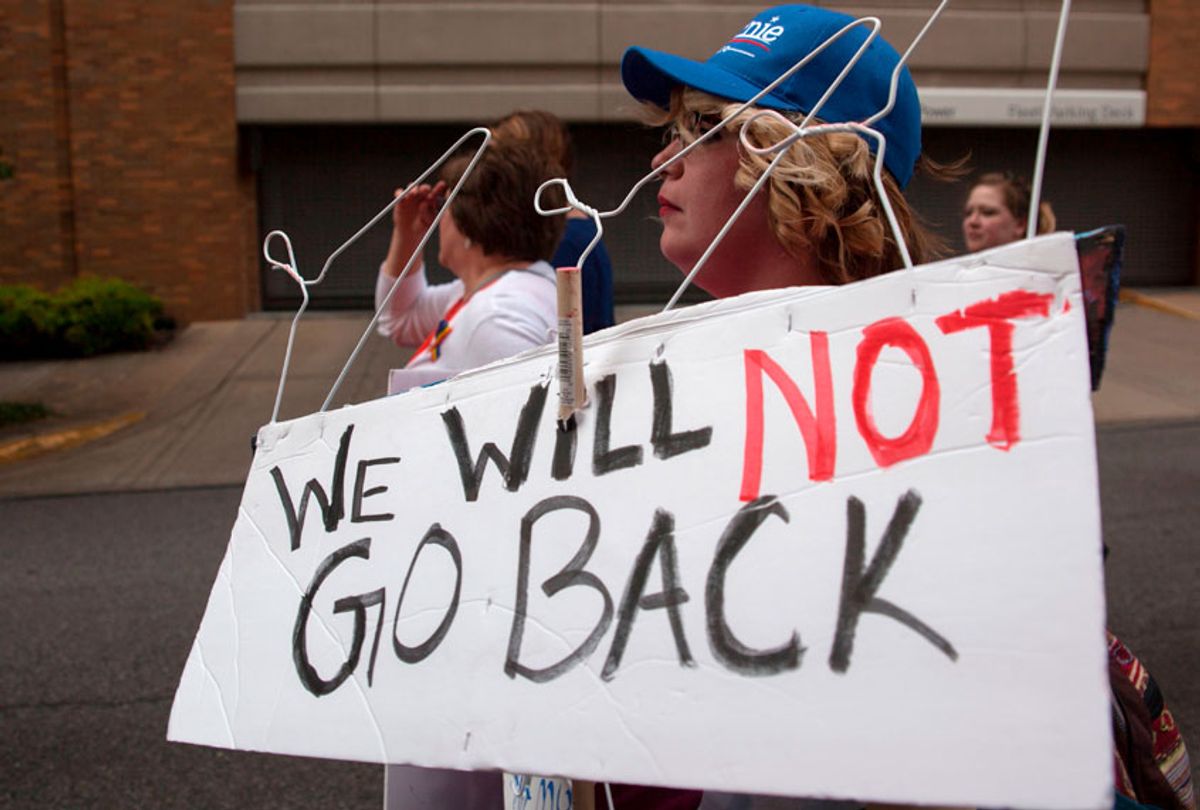 Pro-Choice protesters with metal hangers on a sign march through the streets of Birmingham, Alabama, during the March For Reproductive Freedom on May 19, 2019. (Getty/Seth Herald)
--

You’re a new parent. Your child is born with catastrophic birth defects, limiting its lifespan to just a day or two. Do you torture the baby with extreme medical treatments that won’t save the baby’s life, only extending its life by a traumatic few hours, or do you ask your doctor to make your baby comfortable as it slips away naturally?

Virginia Gov. Ralph Northam’s ham-fisted explanation of this decision aside, Trump is describing the latter option as infanticide — accusing Democrats of wanting to allow new moms and dads the legal right to murder their healthy, birthed children. He’s lying. Badly. This entire issue is about palliative care, an option that any parent who’s faced such a crisis will tell you is an absolutely reasonable, moral choice. Ironically, it is Trump’s lies about this issue, triggering bloodthirsty outrage, that will ultimately get people killed.

Nevertheless, with Alabama, Georgia and Missouri passing the most extreme government regulations on health care choices for women yet, we’re back in familiar territory. On social media and cable news, we’re back to the same old arguments we’ve fought since Roe v Wade was first decided almost half a century ago. As of today, knowing that Roe hangs by a thread, those old arguments just don’t seem to be working. Worse yet, most of the angles orbiting the abortion issue lead to one place: down a rabbit hole, until we’re so far beyond our expertise and nowhere near the core of the issue that we’re too often lost in the darkness. All of us.

You know the arguments. When does life begin? Is a fertilized egg a person? Should there be legal late-term abortions? (Worth noting: Despite Trump’s lies about the topic, late-term abortions account for just 1 percent of all abortions, and literally all of those are performed due to medical necessity.) Think of all the endless arguments you’ve had in comment sections and on social media over the years. The problem is that hardly any of us know what the hell we’re talking about when it comes to the vast complexities of fetal biology and the medical implications of pregnancy.

Religious fundamentalists think they know for certain when a person has a soul, but that’s entirely a matter of faith, and we can’t strip rights from people based on religious subjectivity and existential ambiguities. Surely the human life cycle begins when a sperm enters an ovum — or is it when the fertilized egg implants on the uterine wall — or is it when the sperm and ovum are first formed, destined for each other in the cosmic dance of life? Does the initiation of a life cycle mean an unrecognizable tissue mass is a sentient person requiring constitutional protection?

Good luck getting to the bottom of these questions. In fact, the comments in the Thunderdome under this article should be a fine illustration of the infuriating rabbit holes and blind alleys I’m talking about: the contradictions, the frustrating lack of expertise, the condemnations by religious zealots against unbelievers, the lack of bottom-line focus — all of it.

The abortion debate is ultimately about women, like men, retaining purview over the health and safety of their bodies. Body sovereignty.

Unfortunately, in the land of the free, there is one demographic of citizens whose internal organs are subject to government regulation: pregnant women. (And trans men, who can sometimes get pregnant too.) Hell, we no longer regulate the dumping of toxic slurry into drinking water supplies by disreputable mining outfits, threatening countless lives (born and unborn). Yet for reasons that defy consistency, it’s absolutely permissible for President Trump, Alabama Gov. Kay Ivey, and their loyalists to regulate the uterus, forbidding women from receiving medically-sanctioned, expert-approved procedures to end a profoundly dangerous condition, should patients choose it.

Last week on my podcast, I spoke with Dr. Leah Torres, an OB/GYN who happens to perform abortions. During our conversation, Torres underscored the stakes: “You must use science that is objective, reproducible — the scientific method. And it’s really simple: pregnancy can cause death. True fact. Someone needs to make a decision whether they want to undergo the risk of death. You cannot force somebody to undergo the risk of death against their will.”

“That is enslavement. That is such an egregious violation of human rights,” she added.

This is the very essence of the abortion debate, or at least it ought to be. Irrespective of whether you believe a morula, a blastula, a zygote, an embryo or a fetus is a person, the undeniable medical fact is that all of the above grow inside human beings whose sentience is self-evident and whose body sovereignty is absolute. Therefore the choice about whether to receive medical treatment to nurture or to remove that entity is the sole purview of the fully formed human being carrying it inside her body.

Returning to our tragic conundrum at the top of this piece, the same rights ought to be sacrosanct for new parents whose children are sometimes born with catastrophic birth defects. Do we really want the government of Alabama, for example — a government that’s failing to take care of its existing population of children — or Donald Trump, for that matter, to tell us that we have to torture our dying newborns, under penalty of imprisonment, using radical yet futile treatments instead of making those children comfortable as they pass naturally? We’re talking about Trump here, a man whose ignorance of medicine includes believing the noise from wind turbines causes cancer.

Again, pregnancy is a destructive and life-threatening medical condition. Abortion is a safe and effective medical option to address this condition. Once we relinquish our body sovereignty, once we allow the government to tell us we’re not allowed to address internal bodily threats to our lives as we see fit, we’re inviting the government into our bodies permanently. Women for now, and eventually men, too. And you’d better believe the government will leave the door open behind it. Think about that precedent. Ironically, it’s a precedent that most conservatives refuse to allow for Wall Street or for offshore drilling interests. So, why is it OK to permit such extreme regulation of the reproductive organs of women but not defense contractors or the banks that precipitated the Great Recession?

This is why so many women, and more than a few men, rightfully accuse the anti-choice movement of merely wanting to control women for the sake of preserving the familiar American patriarchy. Is it any wonder? The anti-choice movement happens to be OK with risking anti-life cancer clusters with mining and corporate deregulation; and they’re okay with restricting access to contraception, which significantly reduces abortions.

Similarly, I wonder whether radical anti-choicer Ben Shapiro ever considered how many fetuses, along with the women carrying them, were killed during the anti-life Iraq War he supported? Speaking of which, Trump is apparently about to pardon soldiers accused of shooting unarmed Iraqi civilians, including an old man and a little girl. At the same time he supports laws criminalizing health care. No wonder activists believe the various TRAP laws and outright abortion bans are part of a not-so-subtle movement to regulate women rather than to limit abortions.

This might sound bizarre, but I actually support the views on choice expressed by former Rep. Michele Bachmann:

Four instances of the word “choices” in that short quote. She might not know it yet, but surprise, surprise: Bachmann is, by definition, pro-choice. Of course she was talking about the Affordable Care Act in this context, but her instinct was clearly to defend her own body sovereignty as well as the body sovereignty of all women from government intrusion. When she chose to give birth to her five children, she made five choices on her own, without the government’s interference.

It’s possible that on some level Bachmann understands that stripping away those choices could easily lead to forced birth or, yeah, forced abortions, too. Either option is obviously unacceptable in a free society, and even conservative women who identify as “pro-life” grasp on some level the need for personal decision-making, especially when it comes to life-threatening medical conditions like pregnancy.

Indeed, passing laws in defiance of personal liberty and body sovereignty ought to be unacceptable across the political spectrum, even if one of the options violates our faith. If that’s the case, feel free to vigorously lobby your friends and family along those lines, but keep the government, and especially the government of Alabama and the others, out of it. The history of civilization has proved that government doors, once opened, can easily swing both ways.