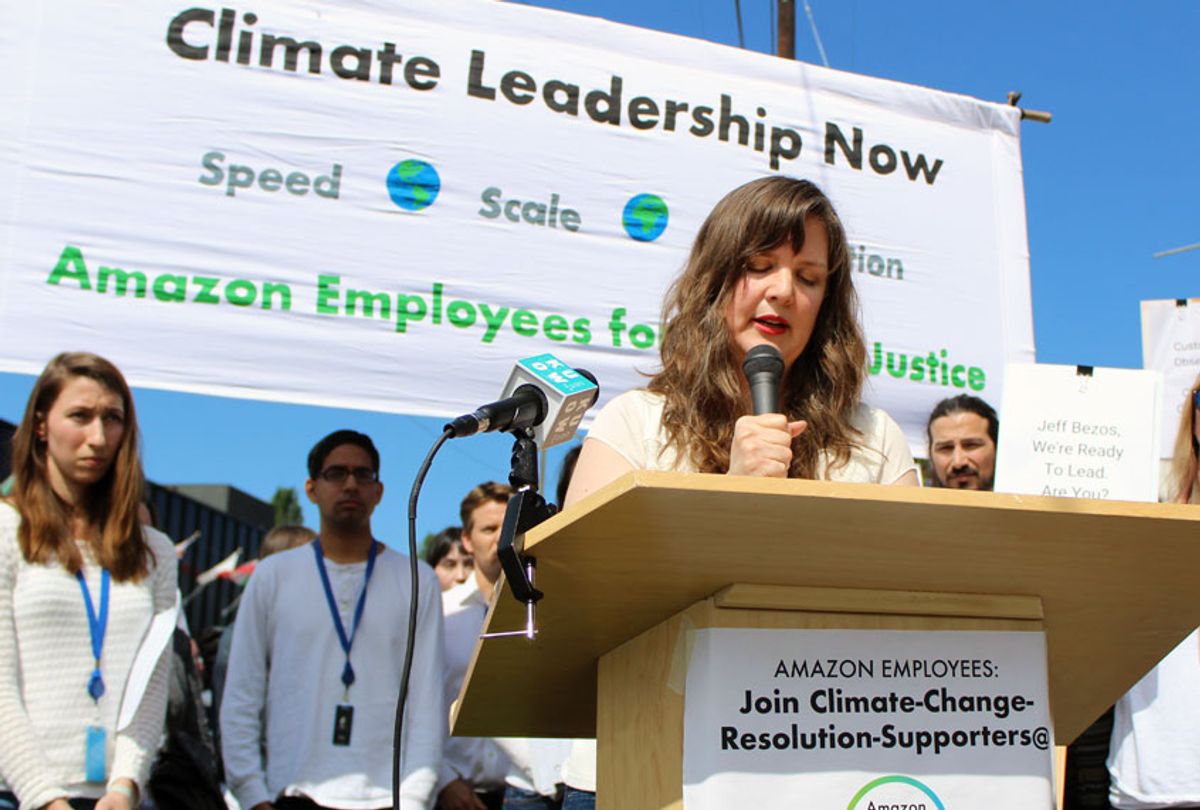 Signs of a paradigm shift in the tech sector bubbled to the surface at Amazon’s shareholder meeting on Wednesday in Seattle. Dozens of employees confronted CEO Jeff Bezos who refused to go on stage to address their concerns about climate change, and the responsibility Amazon must take to address the world’s climate emergency.

The employees were part of the grassroots organization called Amazon Employees for Climate Justice (AECJ) spawned in December after 28 employees signed a letter demanding leadership to develop a company-wide climate plan.

At Wednesday's shareholder meeting, the employees learned that their demands were ignored. According to AECJ, Amazon has not disclosed a detailed initiative to reach zero carbon emissions within the timeline recommended by scientists. AECJ also noted that the company is donating to legislators hostile to a zero-emissions agenda.

According to Emily Cunningham, a User Experience Designer who co-filed the resolution spoke directly to Jeff Bezos at the meeting, asking him to step up and join them.

“We have the scale, speed, and resources. Jeff, all we need is your leadership. Jeff, will you stand with us, and adopt this resolution? Or will you ignore the greatest opportunity, the most important responsibility we’ve ever had: to take bold climate leadership when it mattered more than anything has ever mattered?” Cunningham said. “This is not a rhetorical question: Will you join us, and vote to adopt the resolution?”

AECJ said Bezos “remained off-stage, ignored the employees and would not speak to them.”

The AECJ said in a press release that Bezos’ response underscores “his dismissal of the climate crisis and spoke volumes about how Amazon’s Board continues to de-prioritize addressing Amazon’s role in the climate emergency.”

Weston Fribley, a Software Engineer who co-filed the resolution, expressed his disappointment at a press conference following the meeting and Bezos’ response.

“When will Amazon stop burning fossil fuels? We are proud of Amazon’s success, to which we’ve all contributed,” Fribley said. “We want to be proud of its values as well. The Board can adopt this resolution at any time. The company can announce a timeline to zero emissions at any time.”

Employees in the AECJ are not giving up easily. They plan on filing the resolution again next year.

“Because the Board still does not understand the severity of the climate crisis, we will file this resolution again next year. And we will announce other actions in the coming months,” Fribley added. “We — Amazon’s employees — have the talent and experience to remake entire industries with incredible speed. This is work we want to do.”

Wednesday’s confrontation is representative of an emerging activism among white-collar tech workers in the tech industry. Once a bastion of libertarianism, more tech workers are slowly defying their bosses and tech giants, and organizing to demand democracy in the workplace. While Amazon’s carbon footprint is not entirely known, its packaging and the emissions that result from rapid delivery take a toll on the environment. A study published earlier this month led by researchers at the University of Bristol found that even using the internet — specifically YouTube — leaves a carbon footprint. According to the study, people watching videos on YouTube in 2016 produced 11.13 million tons of carbon dioxide, which is equivalent to the greenhouse gases emitted by a city the size of Frankfurt. This is because of the electricity required, and because YouTube videos can run in a browser tab even if a user isn’t actively watching.

AECJ states that Amazon should “prioritize climate impact when making business decisions, including ending all custom solutions specifically designed for oil and gas extraction and exploration.”

It is this type of prioritization that is needed to keep the Earth at a healthy global temperature.