What separation of church and state? Religious right is pushing its dogma hard behind the scenes in Washington 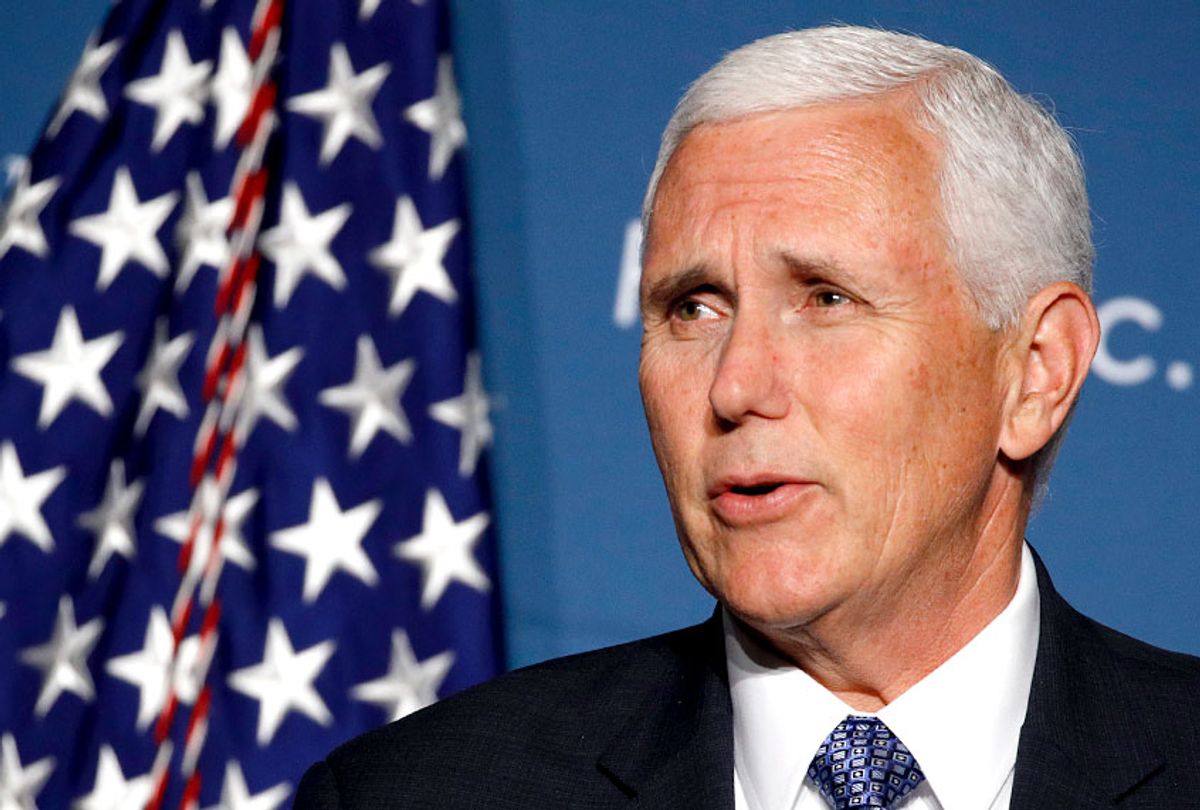 Most urban dwellers, in Washington or elsewhere, have had these chance encounters with religious proselytizers trying to lure in the lost, lonely and emotionally vulnerable. But this was no random encounter with some true believer or doorbell-ringer. These folks were working for Capitol Ministries, a powerful right-wing group that is laser-focused on founder Ralph Drollinger's goal of recruiting public leaders and leaning on them to impose the group's far-right views on a public that overwhelmingly rejects them.

Furthermore, the group has been quite successful so far. As the pamphlet indicated, sponsors of the Capitol Ministries Bible Studies includes seven members of President Trump's Cabinet, the head of NASA, and Vice President Mike Pence. According to Peter Montgomery of People for the American Way, who has been monitoring Capitol Ministries for years now, the group has weekly Bible studies for House members and senators, as well as one for Cabinet officials.

"[Drollinger] uses this really rare and privileged access he has by doing things like a Bible study with members of the Cabinet to tell these powerful public officials that the Bible mandates right-wing economic, social and environmental policies," Montgomery told Salon.

This is evidence, he continued, “that the Trump administration is the culmination of the religious right's takeover of the Republican Party over the last few decades."

Drollinger is sensitive to claims that, by wielding this influence, he is violating the separation of church and state. Instead, the line at Capitol Ministries is that they "believe in an institutional separation" but also that they "believe in influence." Which is to say they aren't trying to forcibly convert all Americans to Christianity, but they are most definitely interested in forcing an extreme interpretation of Christian dogma on all American citizens, whether they agree with it or not.

For instance, in a 2018 class, Drollinger taught his acolytes that "Government is meant by God to quell evil" adding, "Governments and their leaders must send a constant message that sin will be punished." So the policy upshot of that message would be that Americans can believe whatever they want in private, but if they commit what Drollinger teaches is "sin," they should face governmental punishment.

"Sexual Sin and the Aphrodisiac of Power," which is available at the Capitol Ministries website, is a good example of what Drollinger is teaching the people who run the country. Members are asked to refer to Galatians 5:16, the verse that instructs, "you will not gratify the desires of the flesh," because the "the flesh desires what is contrary to the Spirit."

The Bible defines "the desires of the flesh" pretty broadly and without much consistency. They seem to include "idolatry and witchcraft; hatred, discord, jealousy, fits of rage, selfish ambition, dissensions, factions and envy." This Bible study, however, is focused entirely on the issue of sexual expression outside a heterosexual marriage, including those expressions that might happen when "the privacy of a hotel room is combined with the promotion of the internet or pay-per-view television."

"Since most everyone possesses sexual desire, get married!" the pamphlet cheerily recommends, as if making a life-changing legal and emotional commitment was about the same level of decision as grabbing a sandwich because you're hungry.

But despite the breeziness of the "just get married" message early on, things turn more serious later the document: "Once married, one’s body becomes the property of his or her spouse."

Specifically, the pamphlet explains that spouses need "to be unselfish when it comes to meeting the physical needs of their mates" so "as to remove the temptation of sexual fulfillment outside of wedlock."

Despite the careful gender-neutral language of this document, it's not hard to suss out the implication here: Should the mostly-male students of Capitol Ministries should happen to slip up and commit adultery, then the blame lies, of course, with their wives for failing to meet "the physical needs of their mates."

Perhaps this is how Capitol Ministries squares its rigid sexual morality with its intimate relationship to the administration of Donald Trump, a thrice-married chronic adulterer. Salon reached out to Capitol Ministries to inquire about this. We were told that the questions "are based on shaky premises" and would not be answered.

In a follow-up, Salon pointed out again that the president is indisputably a thrice-married chronic adulterer. In response, we were told, "Capitol Ministries does not comment on the personal life of those we minister to."

But this story is about more than the ongoing hypocrisy of Christian conservatives who preaching sexual morality while backing  a lifelong womanizer like Trump whose pretense of religious faith is paper-thin at best. What's more troubling is the way that Capitol Ministries seeks to influence leaders into imposing its fundamentalist views on Americans, including a patently ludicrous "sex only within heterosexual marriage" ideology which more than 95 percent of Americans have rejected in their personal lives.

This isn't about a bunch of religious leaders trying to control their own behavior, or that of their hardcore believers. Drollinger tells his followers that they must not “compromise biblical absolutes" when making government policy.

For example, Capitol Ministries counts Alex Azar, Trump's secretary of Health and Human Services, as a member. Under Azar's leadership, HHS has moved swiftly to live up to Drollinger's instruction to "send a constant message that sin will be punished."

One of the first actions by HHS under Azar was to announce a dramatic remaking of the Title X program such that it can't fulfill its central stated main purpose, which is distributing contraception to low income women. A leaked HHS memo implored employees to shift focus away from effective, female-controlled methods of contraception towards unpopular and ineffective ones, such as pressuring patients to use periodic or even total sexual abstention. HHS has also restructured the program to divert funds away from reproductive health clinics that effectively serve patients to organizations with less outreach or expertise.

In at least one case, HHS funds have been channeled to an anti-choice group that opposes the use of any form of contraception, so that women who depend on Title X for birth control can now get a finger-wagging lecture on the evils of fornication instead.

As Montgomery has carefully chronicled at Right Wing Watch, a blog for People for the American Way, this relationship between Drolllinger's teachings, right-wing ideology and Trump officials is visible in a number of policy choices. Drollinger is fiercely anti-immigration, claiming that God deliberately separated people at the Tower of Babel and, by implication, that they should stay that way. He opposes environmentalism as a "false religion." And, of course, he opposes same-sex marriage and teaches that despite all the language in the Bible about caring for the poor and the vulnerable, programs that do so are illegitimate.

The separation of church and state is a distinction without a difference if it empowers leaders who wish to impose their religious dogma on Americans without the public's knowledge and against its will. Being "allowed" to believe that homosexuality or premarital sex is fine hardly matters if you're not also allowed to act on  it. It's equally ridiculous to argue that it's not a violation of the separation of church and state to claim that "biblical" views on the environment or social spending should trump democratic decision-making and the public will. The flagrant nature of Drollinger's theocratic impulses, however, shows how little regard his Republican followers have for Americans' long-standing right to live under a secular government.