"Not guilty" doesn't always mean you're not guilty. Trump knows an impeachment trial could destroy his reputation 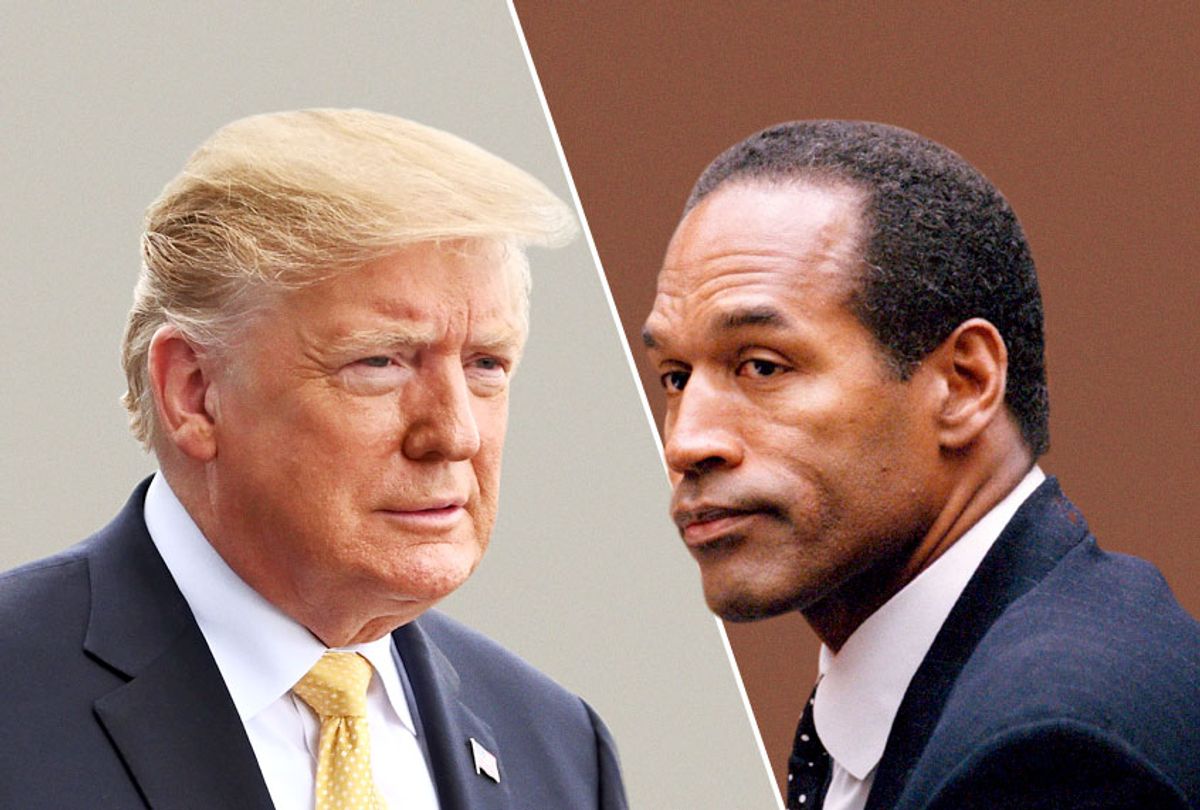 President Trump is back in Washington on Tuesday after yet another disastrous foreign trip. This time he managed to embarrass himself by saying that Korean dictator Kim Jong-un's missile testing didn't "bother" him. This came as he stood next to Japanese Prime Minister Shinzō Abe, who clearly disagreed, seeing as his country would be among North Korea's most likely target. Then Trump launched into some juvenile insults against Joe Biden, saying he and Kim had agreed that Biden is a "low IQ individual" and tweeting that Japanese dignitaries had said that Biden would be a disaster for the United States. In other words, our president behaved like a petulant child, as usual.

He did take the time to tweet some of his usual rants about the congressional investigations:

No matter where Trump is or what he's supposed to be doing, his preoccupation with the Russia scandal and the growing calls for impeachment always take precedence.

Over the holiday weekend there was considerable chatter about whether or not special counsel Robert Mueller will testify in a public hearing before Congress. Apparently Mueller only wants to read a statement and then hold the hearing behind closed doors to avoid a "spectacle." It was also announced that the House Intelligence and Financial Services committees had come to an agreement with Trump's lawyers to hold off on enforcing the ruling that Deutsche Bank must hand over Trump's records until his appeal could be heard. (Legal observers say this made sense because it will speed up the appeal.) And yes, the Democratic leadership is still wringing their hands over impeachment, insisting that they must instead concentrate on passing bills that the Senate refuses to take up, and that Trump would rather spit nails than sign, because that's what the voters allegedly demanded when they gave them a majority.

The debate continues to rage on TV and social media between Democrats convinced that impeachment will result in losing both the presidency and their House majority in 2020 and those who believe that there is no choice and the risk is something they have an obligation to undertake. Interestingly, both sides believe Trump deserves impeachment. It's just that one side believes it would be politically inconvenient to do anything about it.

But of all the reasons stated for holding back — and it's a common refrain — the most preposterous is the one which holds that Trump actually wants to be impeached. The rationale behind this is that he believes a party-line Senate acquittal will give him the ammunition he needs to say (one more time) that he's been fully exonerated and that Democrats were simply out to get him. This fails to acknowledge that Trump is already saying this, based upon Attorney General Bill Barr's highly selective interpretation of the Mueller report. Recall:

He has wobbled on that, even calling the report "total bullshit" at times, but there is no doubt that Trump is going to play the "witch hunt" card at every opportunity, claiming that the Obama administration attempted to frame him and that the FBI and the intelligence community went along with it. A Senate acquittal would not affect that strategy one bit.

Some people claim that Trump wants to be impeached because he thinks a big show works in his favor. But for all his inadequacies, failing to understand media isn't one of them, and Trump knows very well that the Big Impeachment Show wouldn't be a good thing for him. Even contemplating the potential testimony of Robert Mueller has him spooked, and for good reason. As the AP reports:

The president stewed for days about the prospect of the media coverage that would be given to Mueller, a man Trump believes has been unfairly lionized across cable news and the front pages of the nation’s leading newspapers for two years, according to three White House officials and Republicans close to the White House.

Trump feared a repeat — but bigger — of the February testimony of his former lawyer and fixer, Michael Cohen, which dominated news coverage and even overshadowed a nuclear summit with North Korean leader Kim Jong Un in Vietnam. Trump has long known the power of televised images and feared that Americans would be captivated by seeing — and hearing — Mueller, who has not spoken publicly since being named special counsel.

Trump understands the drama of a trial and what it could mean for him, even if he's acquitted. He was once good pals with O.J. Simpson. The two of them used to pal around in New York together and Simpson even attended Trump's wedding to Marla Maples, just months before the murder of Nicole Simpson, O.J.'s wife.

Trump once told Howard Stern that he thought O.J. was framed:

Trump: And because, you know, don't forget, there wasn't that much blood found in the Jeep. There was only about 50 drops.

Trump: Yeah, it's a pretty sad deal, I'll tell you.

Stern: That could have been planted somehow.

Trump: Yeah it could have been. Fifty different people could have planted it.

Trump: I don't think the LAPD is that smart.

Trump recanted in later years, saying that he believed Simpson was guilty. But in 2008 he proposed bringing Simpson onto "The Apprentice," believing it would be great for ratings. (NBC said no.)

As anybody who can remember 1995 will tell you, The O.J. trial's ratings were yuge, monstrous. It was must-see TV for months. The people were divided on the outcome. O.J. had his defenders, particularly in the African American community, which saw the system on trial as much as Simpson himself. But most of the country believed the acquittal was a miscarriage of justice. They saw the evidence play out dramatically on television for months and they came to their own conclusions about Simpson's guilt. And just because the jury came back with a "not guilty" verdict, it didn't change people's minds about O.J. They knew what they saw.

Had the whole thing unfolded only in the newspapers, it would not have had nearly the same dramatic effect. Likewise, just having the Mueller Report serve as the record of (some of) Trump's misdeeds will have far less effect than an extended impeachment inquiry featuring televised congressional hearings. Nobody knows that better than Trump. The last thing he wants is to be like O.J., a man acquitted by a biased jury, walking around in a world in which almost everybody knows he's guilty.

So no — Donald Trump does not want to be impeached. He wants the country to believe the Democrats are too afraid of him to do it.  And for the moment, they are giving him exactly what he wants.