In a "gross abuse of history," not to mention human decency, Alabama lawmakers compare abortion to Nazi genocide 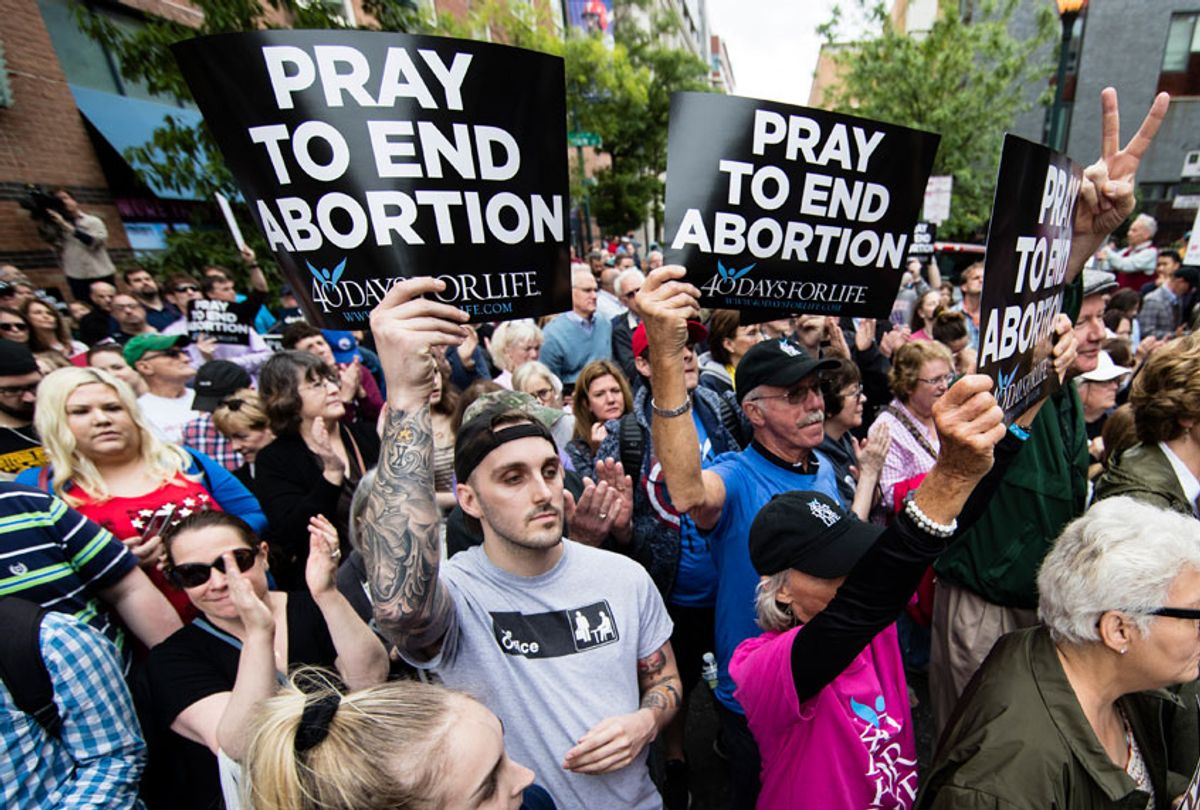 Who owns history? Who controls the truth?

Hannah Arendt signaled to these questions in her classic work "The Origins of Totalitarianism," where she wrote, “Before mass leaders seize the power to fit reality to their lies, their propaganda is marked by its extreme contempt for facts as such, for in their opinion fact depends entirely on the power of man who can fabricate it.”

Arendt's wisdom and warning resonates loudly in the ongoing struggle to protect women's reproductive rights and freedoms in the United States.

Denying women control over their own bodies is antithetical to real and full democracy. Reproductive rights are human rights. To restrict or otherwise limit women's reproductive rights and freedoms is to diminish their full and equal membership in political society.

In this way, authoritarianism and patriarchy are conjoined monsters.

For these and many other reasons, the fight for women's reproductive rights and freedoms is central to defending democracy in the Age of Trump.

But in crisis there is also opportunity. For Christian nationalists, America's weakened democracy and Donald Trump's regime of cruelty have greatly buttressed their efforts to overturn Roe v. Wade, the landmark Supreme Court decision from 1973.

The newest wave of "anti-abortion" bills (which could almost be described as "forced birth" laws) are the result.

As an example, Alabama recently voted into law a forced-birth bill which bans women from ending their pregnancies except when their lives are in danger. This new law does not provide exemptions for when a woman — or a girl — is a victim of rape or incest. The new Alabama law also demands criminal punishments for doctors and other health care providers who help women end their pregnancies. Under this new law, doctors who terminate pregnancies can be put in prison for up to 99 years. When put into effect in November, Alabama will have the most draconian forced-birth laws in the United States.

Valuable information is usually contained in a document's footnotes.

Alabama's new forced-birth law is no different. One of its footnotes reads as follows:

So it appears that the governor and legislators who passed this new law — and those others in Alabama and elsewhere who support it —  believe that women who choose to end their pregnancies are morally equivalent to, and perhaps worse than, Adolf Hitler and the Soviet police state and Pol Pot's regime in Cambodia.

Such comparisons are grotesque. Richard Frankel, a historian of modern Germany and author of the new book "States of Exclusion: A New Wave of Fascism," told Salon by email:

The use of Nazi Germany and/or the Holocaust (or any genocide) for domestic political purposes is nothing new. It has been, until recently, outrageously absurd and incredibly offensive. None of the comparisons are even close to being accurate. Of course, scholars of modern Germany are well aware of this.

What are some of the implications of the comparison?

All of the mass murders listed in the bill were committed with intent. The planners in government and the perpetrators on the ground knew just what they were doing in seeking to eliminate parts or all of entire populations. Hitler was consciously working to achieve the "Final Solution" to the "Jewish Problem" in Europe. To this they compare the decision to undergo a medical procedure, an extremely personal decision made by individual women of myriad backgrounds — racial, ethnic, class, regional, religious, etc. — at different points in their life.

Consider the Holocaust. In juxtaposing what many consider to be the worst genocide in modern history, are the Alabama legislators and their supporters saying that the people responsible for abortions in this country are guilty of crimes equal to or worse than the Holocaust? Who then are the perpetrators of this American "Final Solution"? Who are they in this scenario? Who are the politicians who support a woman’s right to choose? Are they the Hitlers, the Himmlers, and the Eichmanns — the decision makers, the policy makers, the organizers? Who are the physicians who perform the abortions? Are they the SS and police units and soldiers who shot well over a million Jews in cold blood in the fields and forests of Eastern Europe? Are they the SS units who operated the death camps? Are they the physicians who performed unspeakable medical experiments on children in the camps? And finally, who are the women who seek abortions in this murderous conspiracy?

Andrea Pitzer, who is an expert on genocide and concentration camps, also highlighted the ahistorical and intellectually dishonest nature of such comparisons.

"Legislation depicting abortion as a tragedy that surpasses the Holocaust, Stalin's crimes, the Great Leap Forward, and the Cambodian genocide combined is a gross abuse of history," she said. "The political and genocidal horrors of the 20th century shouldn't be used as a prop for some other issue, particularly an unrelated one."

Pitzer continued, "Whatever you think about abortion in America post-Roe v. Wade, it is not government-imposed slaughter. Alabama legislators picked these historical events in an attempt to steal the deep empathy reserved for communities that have suffered unspeakable atrocities. By doing so, they've trivialized some of the greatest tragedies in human history. They've asserted a moral and historical authority that they don't possess."

In response, defenders of the new Alabama forced-birth bill and similar laws in other states — and protectors of Trump's overturning of empirical reality more generally — might claim that no one "owns" history and therefore they can use the Holocaust and other horrific events for their own political purposes.

Gavriel Rosenfeld, a historian of Germany and the Holocaust and author of the new book "The Fourth Reich: The Specter of Nazism From World War II to the Present," would not agree. He wrote, in an email to Salon:

No one “owns” history (certainly not in any legal sense), but groups that have experienced historical injustices are morally entitled to have the “first say” in determining how their historical experiences are interpreted.  To cite two well-known examples, Jews are entitled to cry “foul” when the Holocaust is exploited for ulterior motives (whether by Germans or any other groups), just as African-Americans have the right to do so with the experience of slavery when other Americans seek to portray, interpret or otherwise comment on it.

This is not to say that the historical memory of victimized groups constitutes the only valid view of the past; nor is it to say that they are the only ones entitled have a say in determining its “meaning”; nor is it to say that well-meaning allies from other groups do not deserve to be heard in discussions about various historical legacies. In a society that values free speech, no one should demand the drafting of rules determining who is or is not authorized to speak on a given topic.  But when groups with no immediate claim to a historical legacy co-opt it for their own reasons, they should expect pushback from groups that view the legacy as an important part of their identity. In the free marketplace of ideas, no one owns history, but if possession is nine-tenths of the law, then groups that have had things done to them effectively “own” those experiences more than groups less affected by them.

Who do the advocates of Alabama's forced-birth law believe themselves to be, in their own version of history?

They are "heroes," of course. But in reality they are no such thing. If the forced-birth movement was really "pro-life," both its rank-and-file members and leaders would support gun control, affordable health care, improving public schools, protecting the environment, raising the minimum wage and confronting social inequality more generally. These are public policy goals that would actually improve the lives of children, babies and all other people in America. Instead, conservative white Christians consistently oppose such initiatives.

There is menace in the self-imagined, self-congratulatory "heroism" of the "pro-life"/forced-birth movement. Violence is always an option. Their narrative of defending the "helpless" and protecting the "unborn" basically demands it. This right-wing zealotry has resulted in lethal and other violence against medical professionals who provide reproductive health services to women.

David Neiwert, investigative journalist and author of "Alt-America: The Rise of the Radical Right in the Age of Trump," offered this context in an email to Salon:

The dynamics of heroism and the mythologizing around it are really the keys to how right-wing authoritarians, and especially the real extremists among them, produce. The self-conception as heroic, as acting to save either their community or their nation or their race, is fundamental to how they think and how they then act. So for the anti-abortion extremists, if abortion is murder, then they are acting to prevent a Holocaust itself. One that only just accidentally dwarfs the unpleasantness that befell their Hebrew "friends."

The thing about this heroism narrative is that every single right-wing domestic terrorist I have ever studied — from Tim McVeigh to Anders Breivik to Shawna Forde to Robert Bowers — conceived of themselves first and foremost as exactly these kinds of heroes. And every single one of them justified the horrific slaughters, of innocents and children and worshippers, they enacted by telling themselves they were being heroic, that they were saving whatever aspect of the world they believed was threatened. Rhetoric like this justifies slaughter. It enables genocide.

Forced-birth laws in Alabama and other parts of the country are not outliers or inexplicable occurrences in this moment of American fascism. The violence, authoritarianism and extremism at the heart of the forced-birth movement are not atypical. They are a toxic distillation of what the Trump presidency has wrought and the day-to-day threat it represents to American democracy and the world.