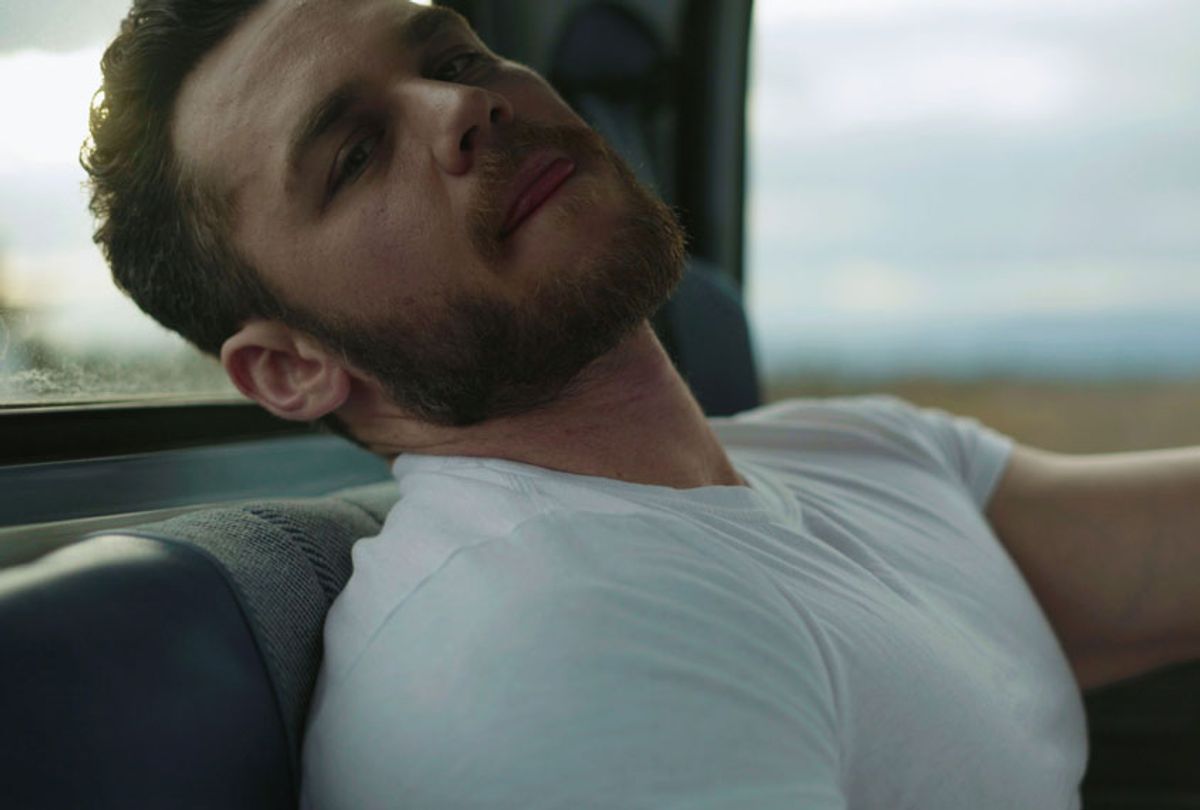 Matthew Camp is an internet sensation. He has more than 566,000 followers on Instagram (not entirely SFW) and had to create an onlyfans site, where more explicit content than that of his Twitter feed can go, since he’s partial to showing off his body. Camp also has a fragrance line (“8.5” and “Transgression”) and a podcast (“Happie Camper Show”). He is now the star of “Camp Chaos,” a documentary project that was created by Corey Krueckeberg, who helmed “Getting Go: The Go Doc Project,” which introduced Camp to many of his legion of fans.

“Camp Chaos” is playing at the Inside Out Film Festival in Toronto May 31 before having its U.S. premiere at Frameline in San Francisco June 28. The episodic series (episode 1 will be available to stream on men.com on June 28) has its star recreating a “formative sexual experience,” which he recounts in voice-over. He Skypes with a handful of men, “auditioning” them to determine who will help him relive his first fantasy in an 18-minute sequence that is stylishly filmed.

Camp may be a passionate sexual partner, but this documentary project shows a gentle side to the gay sex god. He gardens (in the nude), he paints, he mixes cologne, he even plays the guitar and sews. (Not at the same time).

In a FaceTime chat, the perpetually shirtless Camp spoke with Salon about sex, making “Camp Chaos,” and what turns him on.

You are an internet sensation, a cologne maker, and podcast host. How did you develop the Matthew Camp brand, which has generated a legion of loyal fans?

Yes, they are very dedicated. I haven’t had a clear plan on what I wanted to do with my life other than that I wanted to have impact on culture. I started making clothing and was into fashion as a kid. I liked how much you can change someone’s view of you by adorning elements of fashion. I don’t make that much clothing anymore, just costumes for drag queens. The fragrance is up and running now. [My brand] is an IV-drip into the consciousness of gay youth. As far as the careful construction of my identity goes, I focus on the things I want for myself, and I let my subconscious go after them. I appeal to the things I would want to see someone post.

You have a self-confidence that is very attractive. You tease us and dare us to look at you! Do you get a thrill from exhibitionism?

I think that I have a general understanding about way people perceive me, and that gives me an advantage. I love making people happy and getting them to smile. That translates to my daily interactions.

Let’s talk about your body. You are seen in “Camp Chaos” working out at the gym. How often do you exercise to maintain that body?

An ideal day—I’d go twice a day. But there’s so much involved with that. I lift heavy weights and do endurance running. So, I have to eat a ton of food. I go every other day, or every day if it’s a good week, but I am pretty busy building a social media platform for queer people and my onlyfans site which keeps me occupied plus the fragrances and appearances….

You worked with Corey on “Getting Go: The Go Doc Project.” What makes you trust him?

Corey is great. He has a trickster personality and doesn’t give me the whole story, but I trust him to fulfil his artistic vision. He has a good eye and has committed to me in a lot of ways. This is our second film. They talked about the project being more of an in-depth look at pornography. I thought it was interesting, cool, and appropriate for my life right now.

You talk in the film about wanting to recreate a formative sexual experience you had. How does recapturing that moment enhance or detract from the original memory or experience?

I think that as human beings, we are like computers—we store information in our heads whether we choose to remember it or not. Our subconscious is really our main driver and in control. Have you ever had sex with someone who reminds you of someone else and it amplifies the act.

You talk about the “right gay men have to want to have sex, make content with it, and profit off it.” Can you talk about this and why you feel this is “sort of a revolutionary act?”

I think it’s what we need in our culture. As we move forward with technology taking our jobs, and our educational system is, well, bad, when AI takes over, there’s really only gardening and f**king left. So, let’s economize the profitability of sex. Prostitution is our oldest profession. With Trump, we’ll be in an economic downturn for the next 10 years, and so it’s important for LGBT people to get more money so we can have more power. It’s super-counterculture to the Christianity Patriarch foot we’ve been under for centuries. I find [sex] legitimizing. Freedom of speech is a huge thing and making pornography and documenting sex is a freedom of speech, and it gets people financially interested in that amendment.

For me, the sexiest moment in “Camp Chaos” is the shave and shower scene with Liam. I love the way you guys had a bromantic moment. Can you talk about foreplay, and getting in the mood for love?

I think there’s something interesting where you have to have sex with people you’ve not met before—there’s something humanizing about it. To be attracted or relate to them you strip down the artifice. You learn where their pain and happiness are, to pull on those things, and get a reaction. Maybe you do something they don’t know that they like.

What turns you on?

A lot of different things. I like all different guys; it depends on the person, my connection, and how attractive I am to them. My number one turn on is intelligence—entrepreneurs who own businesses and dealing with smart people that challenge me. Physically, I like all bodies, chubby guys, thin guys, older muscly guys. I think it’s interesting to be able to have sexual interactions with multiple people and different status—not money status, but boyish, or father figure, or best friend. It’s interesting to play different roles for people and very gratifying. And extremely enlightening! You get to learn a lot about yourself and other people through sex.

What can you say that would surprise people to learn about you, or something you wouldn’t normally share?

Probably my artwork and that I make costumes for drug queens. I don’t post that on line.

I love plants and planting gardens. It’s one of my favorite things.

What are your thoughts regarding the future of your online work and your followers?

I want to mobilize my following. I’m toying with starting a gay religion. It’s easy to start a religion. You get tax benefits. I am interested in it as an art piece, but also to break the tax system for the church. Money is the great equalizer. So is sex. So, it seems apt to put them together.