All debts are burdensome. Why is it that student loans, in particular, give people so much emotional distress? 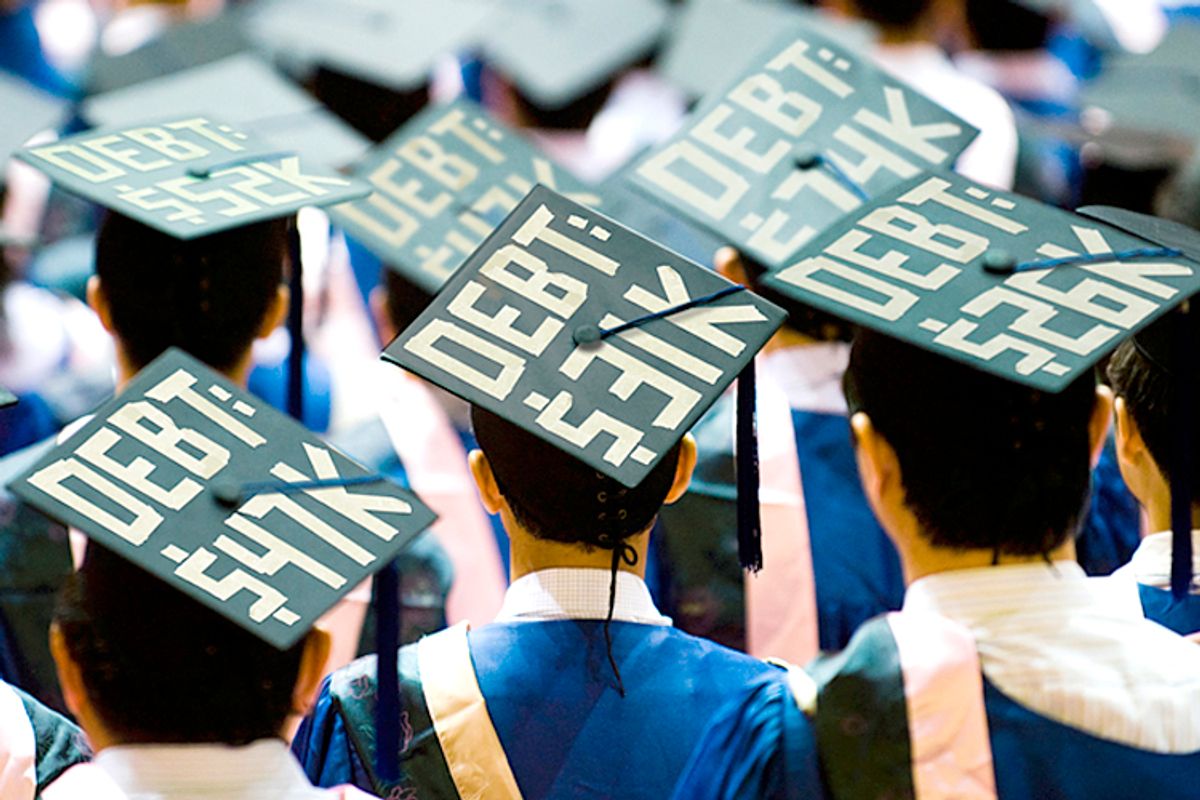 When billionaire Robert Smith pledged to pay off the student loans of Morehouse College’s graduating class recently, the story went viral. But few people realized that his generosity might have saved some of the students’ lives — literally.

Many students and recent graduates have killed themselves, and hundreds of thousands have contemplated suicide because of the crushing burden of their student loans, according to research and surveys.

Millions more are suffering from depression, anxiety, and other distress because getting an education in the US now comes with a lifetime of debt.

“What happens if you commit suicide?” This question appeared in the StudentLoans community on Reddit. “Just weighing my options.”

When asked “Why would you even think that?,” the original poster answers: “Seems like an alternative many people would choose if it ended the debt, to be honest.”

These young people are not alone — not by a long shot. According to a recent survey of current and former students between 20 and 39 years of age, 70 percent of them were $100K to $500K in debt. Because of this burden,

One in 11 deaths by suicide among young professionals was at least partly due to student loans;

One in 15 has contemplated suicide;

Over half (53 percent) have experienced depression;

“Debt has a clear impact on borrowers’ mental health,” said Melanie Lockert of Student Loan Planner, the financial coaching company that did the survey. “It is something we should be talking about.”

This is not the first research on the mental toll of student loans. Over the past few years, many researchers have correlated student debt with poor psychological functioning. However, it is a topic virtually ignored by the media.

A 2015 study found that the link between student loans and mental and emotional dysfunction persists across all income and social groups in the US.

And at least one study revealed the physical and social effects of debt-related stress. In 2017, a financial advising company called Student Loan Hero did a survey of over 1,000 student borrowers. More than 70 percent reported suffering from headaches, insomnia, and other physical symptoms of anxiety, which sometimes lead to self-imposed social isolation.

“I avoid doing things with friends and family,” one respondent said, “because I don’t want them to know how broke I am.”

“Student loan–induced stress is threatening to take over the lives of borrowers,” the survey concludes.

Student loans are pulling down the US economy — this is no longer news. Americans now spend substantially more than students in other developed countries for a college education, at an average of $30,000 per student annually.

Borrowing has almost doubled over the past decade. By the end of 2018, the US had more than 44.7 million student borrowers, across all demographics and age groups, who collectively have amassed $1.56 trillion in debt, according to the US Federal Reserve.

While the macroeconomic crisis of student loans has become a heated topic in the political arena, little attention is paid to the real-life crises faced by debtors themselves. Student loan borrowers are getting crushed by the mounting burden of their debts.

Why student loans are especially toxic

All debts are burdensome. Why is it that student loans, in particular, give people so much emotional distress?

Federal loans, on the other hand, have a handful of forgiveness mechanisms, but such relief is almost inaccessible to the majority of debtors. Federal loans can be forgiven after 10 years (the standard repayment period) for those in select occupations, such as public service workers and teachers, but in practice these programs help very few applicants.

Take, for example, Public Service Loan Forgiveness (PSLF), one of the most popular types of student loan forgiveness. According to the latest available data, of 1,173,420 PSLF borrowers who attempted to qualify for forgiveness as of the third quarter in 2018, only 55 were granted relief.

The Student Loan Planner survey also suggests that the middle class might be hit the hardest by the mental tolls. One in nine borrowers who owe $80,000 to $150,000 in student loan debt considered suicide — as opposed to one in seventeen borrowers who owe up to $600,000.

Lockert explained to WhoWhatWhy that middle class borrowers are likely to be the most depressed because “a higher chunk of their income is going to debt payments.”

For those who sign up for an income-based repayment plan, payments are set at a percentage of their discretionary income. The plan protects those below the poverty line, but for the middle class, an income rise translates to a heavier monthly debt burden.

A college education — traditionally a way for the poor and the underprivileged to raise themselves to a higher financial and social status — has, instead, become a perverse impediment to their aspirations.

More than two-thirds of graduates of the class of 2018 entered the labor market with an average of $29,800 in student loan debt. Many may end up in jobs that will never pay enough to allow them to become debt-free.

“[They] feel like they did everything right. They took out loans to go to school, did well, worked hard. But instead of that leading to success, income, and opportunities, many borrowers feel the weight of debt,” said Lockert.

Whether it gets worse or better will depend on policy changes in rules governing student loan forgiveness or repayment plans restructured to ease the crushing burdens on students who borrowed to secure their piece of the American dream.