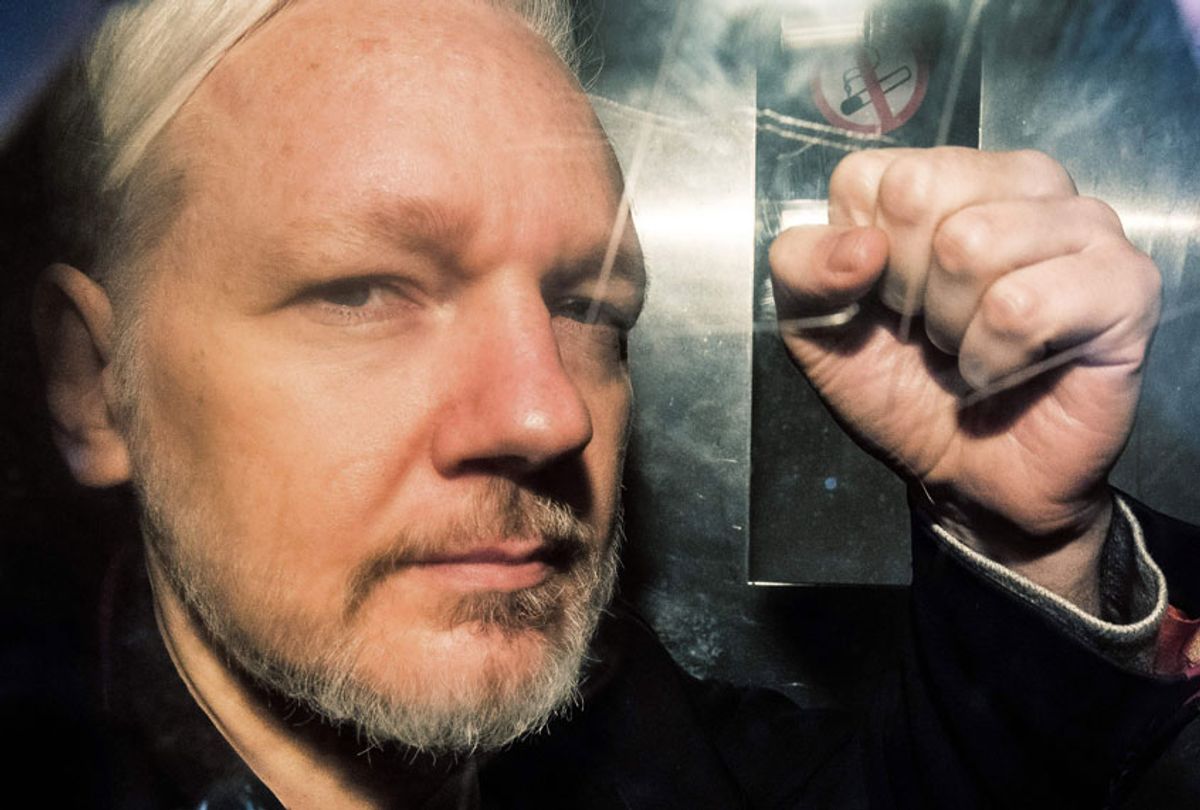 WikiLeaks founder Julian Assange gestures from the window of a prison van as he is driven into Southwark Crown Court in London on May 1, 2019. (Getty/Daniel Leal-Olivas)
--

Julian Assange, the founder of WikiLeaks, should not be extradited to Sweden for an allegation of rape dating back to 2010, a Swedish court ruled Monday.

The ruling by the Uppsala District Court marks a setback for prosecutors who were hoping to issue a European Arrest Warrant for Assange and request his extradition from the United Kingdom to Sweden, CNN reported.

The founder of the whistleblower organization is currently in jail in the U.K., where he is serving a 12-month sentence for skipping bail in August 2012 as he fought extradition to Sweden in connection with the same case. Assange has denied the allegations, which also included a second claim of sexual misconduct that can no longer be pursued in criminal court due to the statute of limitations.

Assange's lawyer, Per E. Samuelson, said Monday that his client would "be happy" to learn he won't be extradited to Sweden, the Associated Press reported. "We are happy" with the ruling, Samuelson said.

Assange was arrested by British authorities on April 11 and carried out of the Ecuadorian Embassy in London, where he was sheltered for almost seven years. His arrest came after Ecuador rescinded Assange's asylum claim due to "repeated violations to international conventions and daily life."

He took refuge in the embassy in 2012 to avoid extradition to Sweden over the aforementioned sexual misconduct allegations. Assange has maintained his innocence in connection to the sex abuse allegations, casting it as a ploy for his eventual extradition to the United States, which accuses him of violating the Espionage Act for his role in the release of thousands of secret government documents stolen and provided to WikiLeaks by former U.S. Army intelligence analyst Chelsea Manning.

Sweden discontinued its sexual misconduct investigation into Assange in May 2017, as the fugitive WikiLeaks founder holed up in Ecuador's embassy. The country announced last month that it will reopen its investigation.

The Swedish court's decision means the U.S. will not have to compete with Sweden over which extradition request is given priority.

Eva-Marie Persson, Sweden's deputy director of public prosecutions, said she has not decided whether to appeal but suggested the investigation will continue.

"I will also issue a European Investigation Order in order to interview Julian Assange," Persson said, adding that she hasn't decided on a date for the questioning in England.

Assange is wanted in Sweden on suspicion of "intentionally having carried out an intercourse" with an unnamed woman "by unduly exploiting that she was in a helpless state because of sleep," the Associated Press reported, citing court documents.

He reportedly faces a maximum of four years in prison in Sweden if he is convicted of rape.