At home and abroad, the supermarket is the church where I worship 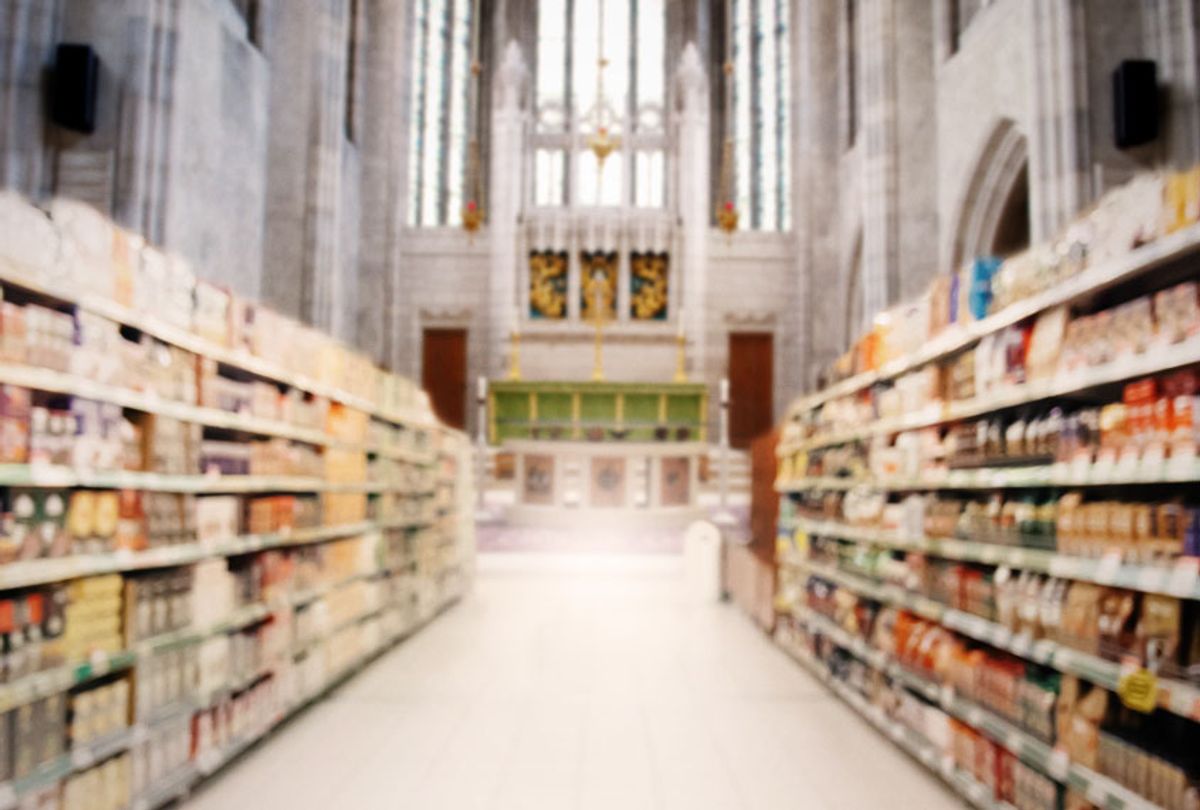 Every village, town, and hamlet has its temple. A large city will have hundreds. I'm talking food markets, and if I'm in the mood for divine inspiration that's where you'll find me. Thank god, I live in Brooklyn where I have Korean vegetable stands, Dominican stores, Asian emporiums, organic butchers, and countless specialty shops, not to mention farmer's markets, all of which offer succor. If a day should pass without me in deep communion with cuts of goat, or tofu skin sheets, or incendiary peppers, I feel completely unmoored, adrift in this godless universe.

The food temples of a foreign land are my first destination when I travel.  And, the relief of seeing the towering displays of lettuces, gourds, tomatoes, and leeks have me sinking to my knees or genuflecting before the cheeses: the bries, the blues, the cheddars, the softs, and the hards. And the meat counters! Well, if that doesn't bring on thoughts of heaven and earth, life and death, then I don't know what will.

Once in Abu Dhabi, where I was living for a couple of years, I stood before a display of beef, my thoughts profound. Brazilian versus the English? Is a gaucho life better than one on the Sceptred Isles? And, what about beef from India, aren't they sacred? I was getting around to imagining the life of Aussie cows, and whether they were less stressed than ones from New Zealand because they don't live with the threat of earthquakes, when my husband came up and said, "what the hell is taking you so long?" I turned to him, "I can't choose! After all, each had such different lives.”

I know, I know it takes 1,799 gallons of water to grow one pound of beef. But a true temple of food allows for these complicated thoughts. And, honestly,  every time I try to be a vegetarian I end up looking like Elizabeth Barrett (before she met Browning), this wan woman on the couch, too listless to even raise an arm, worried relatives gathered around wondering what happened to the once lively girl. But I try to do right by the beasts who give my blood superhuman strength and have conditioned my husband not to faint when I emerge from the butchers with a few small packets of meat and our life's savings deeply depleted.

But even if you are a vegetarian, or have endless allergies like me, or for religious reasons have foods that are verboten, the food market is still a temple for all.

Think of the rush when wandering down the aisle and you stumble on a hitherto unknown bottle of chili or a jar of olive oil so deep sea green you want to drizzle it all over yourself (let alone a tomato). In Australia, I found a cheese called "Strong and Bite-y," a great cheddar, except the name reminded me of an old boyfriend whose “love bites” verged on vampiric.

And, what about those fantastic "praise be" moments when you spot something that interests you, an Indian curry sauce or an exotic marinade, read the label and think to yourself, "Hell, I can make this. Better even. And without the sodium benzoate, the high-fructose corn syrup and any heart-clogging trans fat!"

Food labels really are the ultimate bible. Study them diligently and a path to a healthy life is opened up to you.

I do have my gripes; not every supermarket is a mecca. Big box stores give me the willies. I don't want to be contemplating making a Coq au Vin knowing that in the next aisle is motor oil or packets of sixty high-waisted cotton underpants. I don't want greeting cards, or living room sets, cheap blended sheets, or clothing that looks like it fell off the back of a truck.

Imagine going to your favorite house of worship and as you bowed your head to pray a voice came across the loudspeaker and said, "Attention Believers, in pew twelve you can get a great deal on being a Buddhist with the guarantee that when reincarnated you'll come back as the prettiest bird, one that has no predators! And in pew seven? The tenets of Judaism!"

There is one thing food markets have over all churches, temples, and synagogues. I'm speaking of being able to see into someone's soul, or their shopping cart, which in my mind is the same thing.

Everything you need to know about a person is right there. Eggos and protein bars alongside MotherEarth soap? A single man at war with himself, lost in this confusing world, worried about the future? Lunchables and packets of chicken breasts, Annie's macaroni and cheese and frozen vegetables? A harried mother who resents her husband because he's the kind that has a habit of reading out loud the bits from the paper that claim the obesity epidemic is, nine-times-out-of-ten, the mother's fault?

You can see why I am fascinated by shopping carts, and will happily wait in a long line at the cashier to get a gander at what people are buying.

Every once in a while I get a quizzical look from the person whose cart I am fixating on, and in Sicily I nearly got into a brawl. My husband and I were there for Christmas. Traveling off-season allowed us to rent a vast glasshouse overlooking the sea in Cefalu for about a hundred bucks a week, or something ridiculous. Having settled in, we went in search of the market. As you would imagine, on the day before Christmas the place was a madhouse. Walking in a couple of Romany girls tried to snatch my purse when I yanked it back, one raised her hands and shrugged as if to say my loss, not hers.

Battling through the crowds our emotions swung from utter joy (finding beautiful fresh zucchini blossoms and a trussed pheasant) to confusion (which of the myriad kinds of milk might best approximate half & half) to horror (How is anyone an alcoholic in Europe at these prices?!).

By the time we got to the check-out, our nerves were as frayed as everyone else’s, especially when we realized that our line was being held up by the very same Romani girls who were now paying for a couple of bags of candy and two beers with change pulled bit-by-bit from their grubby pockets. Glazed with jet lag, I found myself staring unabashedly into the cart of an old woman in widow's weeds. I was fascinated that while she had links of glistening sausages and hand-cut cheeses as well as hand-milled flour with which I presumed she was going to make pasta, she also had instant coffee and tacky-looking store-bought cakes.

In my fatigue, I might have been leaning a tad too far over her cart, but whatever the case, I felt a big hand clap down on my shoulder and suddenly her son was yelling at me in Italian. I started yelling back in English. My husband, of Italian descent, started yelling in Spanish for some reason. It all could easily have escalated into a melee, if the mother, her eyes now scanning my bag full of blossoms and our selection of cheeses and charcuterie hadn't laid a hand on her son's arm and told him to calm down. We all stopped yelling. The woman then caught my eye, nodded to my cart, and gave me a big toothy grin.