Censure rather than impeach? Hell no, Democrats — that's inexcusable cowardice

There's a push to censure Trump instead of impeaching him. Do Democrats actually want to look like waffling wimps? 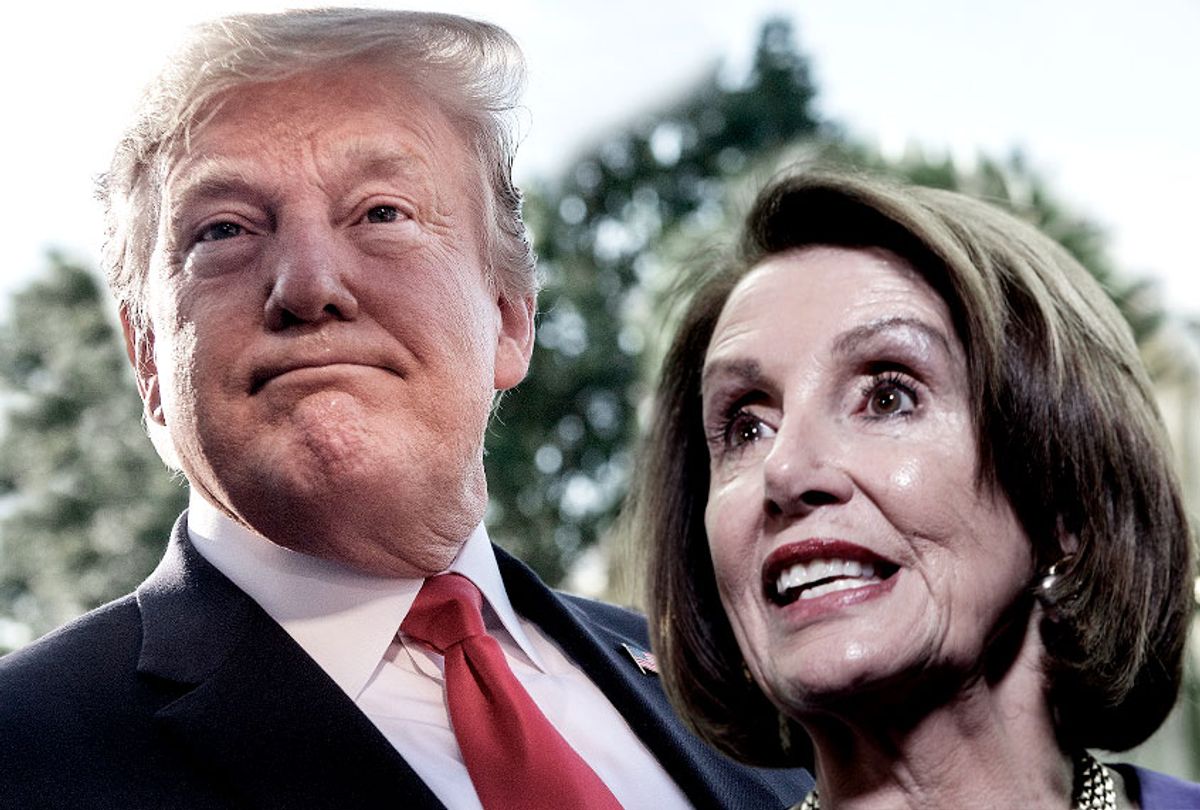 The clamor to impeach Donald Trump is growing in the wake of the damning report by special counsel Robert Mueller detailing Trump's eye-popping levels of likely criminal behavior and corruption. House Democrats find themselves in a pickle. On one hand, it's becoming increasingly clear that impeachment may be the only way to impress upon the public the full extent of Trump's eagerness to go along with a Russian criminal conspiracy to interfere with the 2016 election on his behalf, and his efforts to obstruct the investigation into that conspiracy. On the other hand, Democrats, protective of their newly gained majority in the House, are clearly afraid that a big move like impeachment is too risky and could backfire on them politically in the 2020 election.

In the desperation to find some kind of middle ground, some people have latched onto the idea of censure, a process in which the House of Representatives passes a resolution declaring someone to be a very naughty boy (or, hypothetically, girl), but without attaching any consequences to the behavior.

"House Democrats are eyeing a move to censure President Trump as a possible alternative to impeaching a president," the Hill reports, citing Rep. Ro Khanna, D-Calif., hyping the idea that this would amount to "a permanent mark on the president’s record."

Yale law professor Bruce Ackerman wrote an op-ed calling for censure in the Los Angeles Times last week, noting that "formal condemnations by a single chamber of Congress have a long history," and writing at length about the 1834 congressional censure of Andrew Jackson for abuse of power in a banking dispute.

Let's cut to the chase: Censure is a uniquely stupid idea. Censuring Trump instead of impeaching him might actually be worse than doing nothing at all to hold him accountable.

It's beyond me how anyone could have watched Trump's public antics for the past decade and think he's concerned about his "permanent record." He is definitely obsessed with fame and glory, but he obviously has no interest in being venerated for his strong moral character. Like most hardcore narcissists, he appears to have little interest in the question of how he'll be perceived once he's gone.

On the contrary, the president — who obsesses constantly over "winners" and "losers" — has been quite clear that he would like to be seen as ruthless in his quest for domination. He glories in cheating and breaking the law, proud to demonstrate that he is untouched by the petty moral and legal concerns of mere mortals.

Attorney General William Barr was asked on "CBS This Morning" if he's worried about his reputation, in light of the fact he's basically running cover for a likely criminal president. His answer? "Everyone dies."

Trump and his people are only interested in cashing in and protecting their own power. The "permanent record" and being remembered as a good person are, in their eyes, the concerns of wimps and losers, not "winners" like themselves.

In his piece trumpeting the censure of Jackson in 1834, Ackerman even admits that Jackson survived it just fine. He served two full terms as president and "even managed to convince the Senate to expunge its earlier motion from the record." Take a $20 bill out of your wallet right now and have a look at his portrait. Jackson hand-picked his successor and decided not to run again largely due to his  poor health, not because of the toothless censure of his behavior.

The political liabilities for a failure to impeach have been laid out repeatedly by a number of progressive writers, with the latest extremely strong case being made by Adam Jentleson, who served as former Senate Majority Leader Harry Reid's deputy chief of staff, in GQ. Jentleson compares the Democratic reluctance to impeach to the party's reluctance to fight for Merrick Garland to be seated on the Supreme Court, in the face of Senate Majority Leader Mitch  McConnell's blatant abuse of power. Democrats basically just accepted that, blithely assuming that Hillary Clinton would be elected president and they'd get a do-over. The result, as we all know, was that Garland's seat went instead to Justice Neil Gorsuch, a Trump nominee and hardcore right-winger. (Brett Kavanaugh may be more personally repulsive, but Gorsuch is arguably more conservative.)

"The decision not to impeach is not a decision to focus on other things, it is a decision to cede power, control, and legitimacy to Trump," Jentleson argues.

The two main reasons to impeach, in other words, are these: 1) It will make the Democrats look like they are boldly holding Trump accountable while Republicans continue to cover up for his crimes. 2) It will help Americans outside the Trump fan base — who largely did not read the Mueller report but might well watch impeachment hearings — understand how serious Trump's likely crimes are.

Censure, on the other hand, will accomplish neither of these things, while still giving Trump opportunities to play the victim to his Republican base.

Yes, as Ackerman notes, the House would hold a floor debate about the reasons for censure, but he's being overly optimistic that such a thing "would dramatize the high stakes raised by Trump’s unilateral power grabs." In the real world, the audience for a House debate on an obscure wrist-slapping measure is slightly smaller than the audience for an eight-hour performance art piece about the plight of coral reefs, illustrated by interpretive dance. Trust me, members of Congress say hair-curlingly crazy things on the regular during House debates. They rarely make the news because even Washington reporters don't bother watching House debates.

Impeachment hearings before the House Judiciary Committee, on the other hand, would be must-see TV, likely shown not just on C-SPAN but on the cable news networks and heavily covered in the rest of the press. For good reason, people are far more interested in what witnesses to Trump's corruption, reluctant or otherwise, have to say than in hearing a bunch of politicians preen and deliver pompous monologues during a floor debate.

As for fighting the perception that Democrats are a bunch of waffling wimps who are afraid to stand up to Trump, censure would only end up reinforcing that image.

A slap on the wrist for an offender is often perceived as worse than no justice at all. People rose up in outrage when convicted rapist Brock Turner was let off with a mere three months in prison, but by and large fail to show that same level of outrage for the fact that most rapists never face any punishment at all.

Voters aren't as stupid as the political class sometimes believes. Censure will be seen for what it is: A half-measure by a bunch of cowards who are unwilling to stick their necks out, even though they know full well that Trump is a criminal who obstructed justice and openly colluded with the Russians live on TV. (And who continues to collude, by repeatedly rejecting efforts to prevent similar interference in the 2020 election.)

I too was an impeachment skeptic — until the Mueller report came out. Reading it, though, I was overwhelmed by the sheer volume of criminally minded behavior from Trump and the inescapable sense that our president behaves exactly like a crime boss. And while Trump diehards will never, ever admit this, the evidence against him is so extensive that I have to imagine it will sway the opinions of most Americans who are already disinclined to defend him.

The problem, of course is that the Mueller report is more than 400 pages long and was written by lawyers. Almost no one read it, and almost no one will. Democrats have an obligation to get that information in front of the public in a way that they can absorb it. Wide-ranging investigations of Trump's corruption are a good thing and should definitely continue, but Trump's stonewalling has exceeded even the most cynical predictions. Impeachment may be the only way left to get this crucial information in front of the voters who need it.

Dire times call for acts of courage, even from the notoriously skittish Democrats. The time for half-measures is over. It's time to impeach or go home.