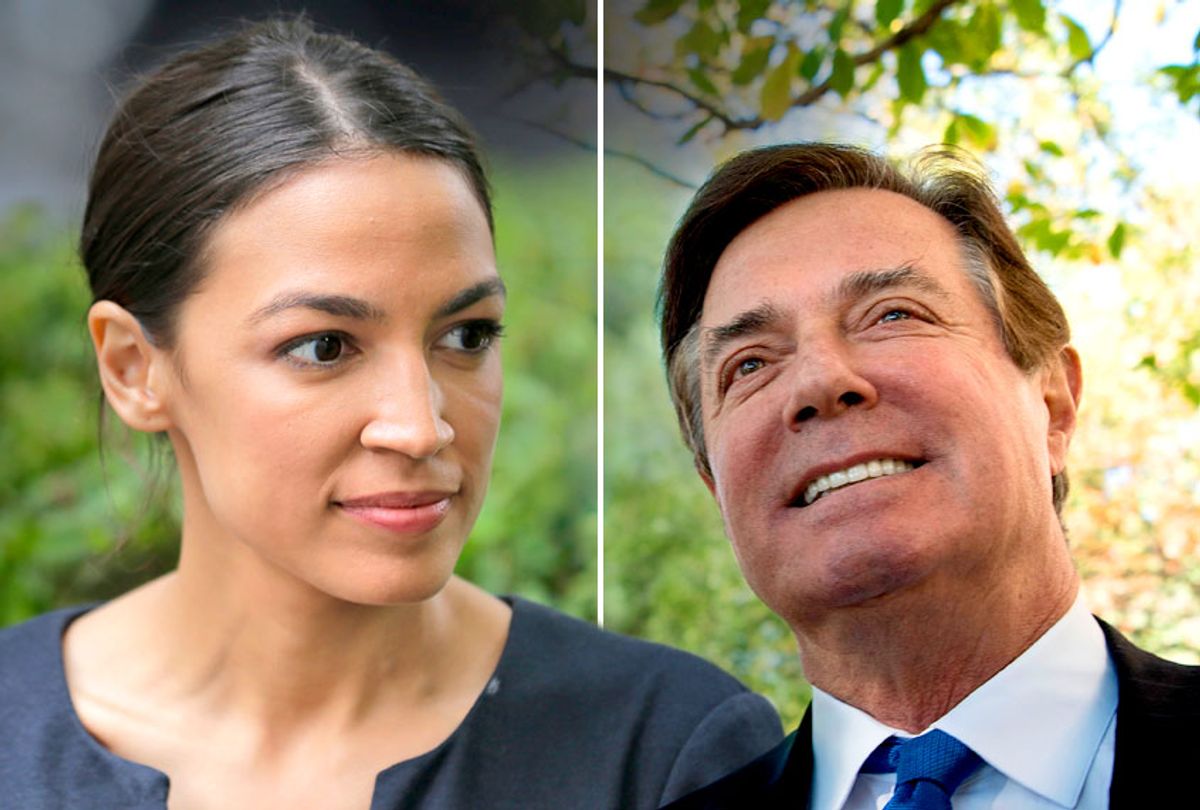 Rep. Alexandria Ocasio-Cortez, D-N.Y., says former Trump campaign chairman Paul Manafort should not be placed in "solitary confinement" while completing his federal prison sentence on New York City's Rikers Island, the notorious prison complex which has been home to some of the most infamous inmates in Gotham history — from serial killer David Berkowitz to John Lennon's murderer, Mark David Chapman.

Her remarks come a day after multiple news outlets reported that Manafort would be transferred from a low-security facility in Pennsylvania to Rikers Island, where he will await trial on a host of state mortgage fraud charges.

In her tweets, Ocasio-Cortez cited an article from the New York Times, which noted the possibility that Manafort would be sent to Rikers, but contained no mention of solitary confinement — only isolation. The newspaper reported that high-profile inmates on Rikers are often placed in "protective custody," which is segregated from the general prison population, for their own safety.

It remains unclear whether Manafort will be held in isolation for his own safety or in solitary confinement. The two forms of imprisonment both require inmates to live in single cells, but solitary confinement often entails much stricter measures, such as 24-hour lighting and virtually zero human contact, while isolation may allow additional time for social interaction and out-of-cell activities.

Ocasio-Cortez responded to the distinction between "protective custody" or "isolation" from "solitary confinement," which several Twitter users quickly pointed out, saying she wants to ensure Manafort and others are kept out of solitary confinement, which she considers to be a form of "torture."

"'Protective custody' IS a separate practice, but does not necessarily exclude solitary," she wrote. "If he is in fact not being held in solitary, great. Release everyone else from it too."

He will most likely be arraigned on the new charges in New York State Supreme Court in Manhattan later this month, according to the Times. Contained in a 16-count indictment, the charges allege Manafort engaged in a yearlong scheme, in which he falsified business records to obtain millions of dollars in loans.

Manhattan District Attorney Cyrus Vance Jr. obtained an indictment of Manafort in March in an effort to ensure he would still face prison time, even if Trump pardons him for his federal crimes.

It remains unclear whether a presidential pardon will come in the future for Manafort. Trump has not indicated whether he intends to pardon his former campaign chairman, although he has often boasted of his power to grant pardons, including to himself, and he has expressed sympathy for Manafort on a number of occasions, referring to him as a "brave man."

The federal charges on which Manafort was convicted were brought by special counsel Robert Mueller, whose 22-month long investigation into Russian election interference, alleged ties between the Trump campaign and Moscow and whether the president obstructed justice has been dismissed as a "a witch hunt" by Trump and his supporters.

New York City Mayor Bill de Blasio, who is vying for the Democratic presidential nomination in 2020, said in an unrelated press conference Tuesday that Manafort will not be given special treatment at Rikers, beyond measures needed for security, when he is moved to the facility.

"He is going to be treated, as much as humanly possible, like any other inmate and would have the same rights and responsibilities," he said.