Yes, Republicans can stand up to Trump — when their big donors insist on it

Senate Republicans are willing to defy Trump, and even override a veto — because big business hates his tariffs 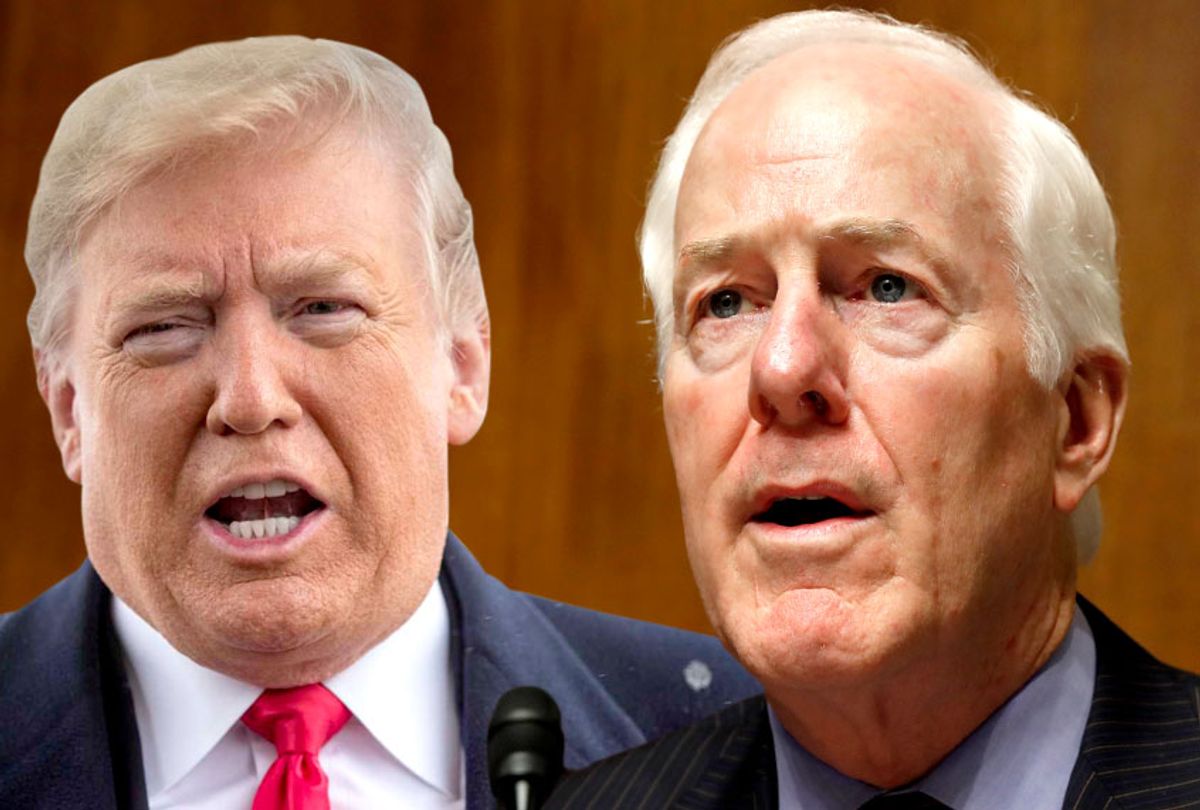 President Trump and his massive family entourage managed to make it through Tuesday on their British visit without a truly terrible gaffe. That's a major accomplishment. Trump did insult the mayor of London again and stuck his nose into Brexit politics during a press conference with outgoing Prime Minister Theresa May. And yes, he lied and said that there were many people greeting him enthusiastically on the streets and there were just a few small protests, calling all the reports which showed the opposite "fake news." But all of that is par for the Trump course.

He did say a couple of things that were newsworthy. A British reporter asked him if a post-Brexit unilateral trade deal with the U.S. would mean that Britain's National Health Service was on the table. He said it would be. Labour leader Jeremy Corbyn, whom Trump refused to meet on this trip, pledged to fight to his last breath to prevent allowing their "precious, wonderful National Health Service" be privatized by American corporations. Trump walked back his comment later, leading some to suggest that he didn't even know what the NHS was when the question was asked. That's possible, but U.S. ambassador Woody Johnson had told the BBC just a few days before that the NHS would have to be part of any U.S.-U.K. trade deal, so it seems likely that this is something that's been discussed inside the Trump administration.

When asked about reports that the Republicans in the Congress were resisting his threatened tariffs on Mexico, which Trump has said he will impose under his elastic definition of "national security," the president said it would be "foolish" of them to defy him, reminding them that he is very popular with Republican voters. (He lied, as usual, saying that at 94% his popularity among the GOP base is the highest ever. In fact, it's consistently in the high 80s, and not the highest ever.) His comment was clearly meant as a threat to Republicans who are thinking of breaking with him on his trade war.

We'll see whether they come through. Even if Republican leaders ultimately capitulate, their little rebellion illustrates the fact that as much as they like to pretend they're powerless to stand up to Trump because of his stranglehold on the base, they are willing to put up a fuss when it's something they truly care about. Or, to be precise, when it's something their big donors care about. This latest front of Trump's trade war is definitely one of those times.

American business has been fairly sanguine about the tariffs on Chinese goods. They realize that this trade war is being waged very stupidly, but Chinese companies have pushed unfair trade practices for years and business was willing to give Trump some room to maneuver, perhaps thinking that the "madman" theory might just work in this situation. They've stood back as Trump abrogated NAFTA and put Canada and Mexico through the wringer for some mild improvements to the deal, even as people suffered for it. He's threatened Japan and Europe with tariffs if they don't do what he wants. But Trump's impulsive threat to slap tariffs on Mexico unless they stop immigration and drugs from coming over the border may have shaken the business community out of its complacency.

Some very powerful Republican interest groups are unhappy about this, and while GOP senators and representatives are undeniably concerned about Trump's popularity, they are even more concerned about their big-money backers. The U.S. Chamber of Commerce, the Business Roundtable, the Alliance of Automobile Manufacturers and the National Retail Federation are just a few of the business groups protesting this move. Some of those, led by the Chamber, say they are planning to sue the White House to stop the tariffs on Mexico. Republicans in Congress may not care about children being put in cages or left in vans overnight in the middle of the summer. But they come to attention when the titans of capitalism get upset.

The New York Times reports that White House lawyers came to Capitol Hill on Tuesday to speak to the Senate Republican conference and they got an earful, particularly from the two Republicans from Texas. Sen. Ted Cruz called it a $30 billion tax, while Sen. John Cornyn said, "We’re holding a gun to our own heads." Sen. Ron Johnson of Wisconsin told the Times, "The White House should be concerned about what that vote would result in, because Republicans really don’t like taxing American consumers and businesses."

Trump somehow believes that the tariff will be paid by Mexico because he is clueless about how this all works. Until now, Republicans have allowed him to pretend that foreign nations will pay for his trade war because nobody they really cared about was complaining. But it seems they can find their voices to oppose the president when they want to, which suggests that otherwise they really don't have a problem with most of the stuff he does. With the exception of Sen. Rand Paul of Kentucky, who openly admits he loves most of what Trump is doing, they don't even seem to care that he's creating new executive powers out of thin air. There's no precedent for using tariffs as a foreign policy tool, or an attempt to curb immigration.

As I said, we don't know how this one will go. It's possible that Republicans and the Mexican government can come up with some sort of "deal" that Trump will call a big victory and the whole thing will go away, at least for now. Senate Majority Leader Mitch McConnell seems to think that's how it will go, telling the press, "Our hope is that the tariffs will be avoided, and we will not have to answer any hypotheticals.” Paul has indicated that the Senate may have the votes to override a potential presidential veto and get rid of these tariffs, if it comes to that. Trump's new NAFTA agreement would be a likely casualty of this conflict as well.

It's amazing how Congress can come together to thwart this president when they really want to.

The tariff ultimatum was made against the advice of just about everyone in the Trump administration — except, that is, for Stephen Miller, the president's hard-line anti-immigrant adviser. The Atlantic reports that White House aides say this all stemmed from Trump's anger over Robert Mueller's appearance at the Justice Department last week, quoting an unnamed adviser who said, “Whenever a negative story comes around, his instinct is to pivot to immigration or trade. It’s kind of like his safety blanket." This was a twofer. Trump felt insecure so he shook up the financial markets and threatened to damage a vast segment of the American economy to make himself feel better. What's a little economic turmoil — and an unexpected tax on businesses and consumers — when the president needs his blankey?