A poll says Americans don't blame the media for made-up news, but does expect us to fix it. Good luck with that 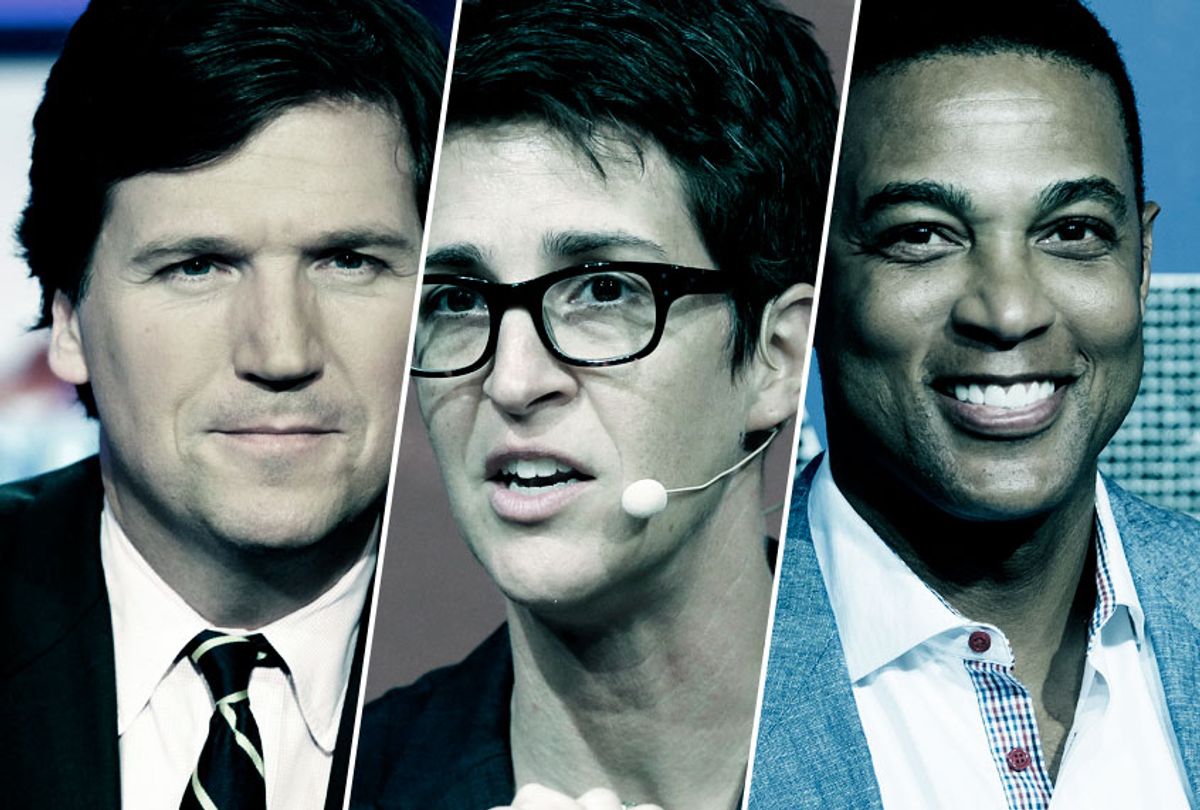 Last week, CNN anchor Don Lemon made headlines when he shared an example of the sort of overt, aggressive racism to which he’s been subjected since Donald Trump took office.

"I was doing a shoot in the park the other day,” he recalled during his appearance at the FT Future of News Summit in New York City, “and someone shouted at me, 'I'm sick of watching you. We built this country. I can't wait for CNN to fire your black ass, you f*****.'"

He went on to describe receiving threatening phone calls and mail, admitting he doesn’t go on social media anymore either.

According to The Hollywood Reporter’s coverage of Lemon’s appearance, one particular Trump supporter calls him 300 times a day. People have found his address and flooded him with junk mail, and he’s even had a few call law enforcement to make false accusations about him.

Because of all of this and, I’d imagine, many other incidents he chose not to share, Lemon is concerned for his personal safety and says contending with that fear and the culture’s general toxicity has taken its toll.

"I wonder how long I will continue to do this particular job in the way I do it," he said.

Last week, Vox political and media analyst Carlos Maza made headlines by revealing in a thread on Twitter that right wing YouTube personality Steven Crowder had spent years targeting him with racist and homophobic derision.

Maza says Crowder’s sustained abuse emboldened his fans to dox the journalist and flood his phone. His Twitter direct messages overflow with threats and slurs. Maza took his story public and asked YouTube to enforce its policies against harassment and bullying. After a spate of confusing back and forth announcements, which itself came on the heels of widespread public shaming, YouTube suspended Crowder’s monetization.

YouTube’s head of communications Chris Dale pledged in a statement, “In the coming months, we will be taking a hard look at our harassment policies with an aim to update them — just as we have to so many policies over the years — in consultation with experts, creators, journalists and those who have, themselves, been victims of harassment.”

What didn’t make nearly as many headlines last week are the recently released findings of a Pew Research Center poll that cites “the creation and spread of made-up news and information” as the cause of significant harm of the nation, ranking it as of greater concern than climate change, violent crime, terrorism, illegal immigration, racism and sexism.

The survey of 6,127 U.S. adults conducted between Feb. 19 and March 4, 2019, on the Center’s American Trends Panel also finds that some 68% of respondents believe made-up news and information greatly impacts our confidence in government institutions, and more than half — around 54% — believe it is having a major impact on our confidence in each other.

And, in a turn of events that may somewhat gladden journalists’ hearts following poll after poll telling them how much Americans distrust them, for once the surveyed adult blame political leaders and activists “far more than journalists for the creation of made-up news intended to mislead the public.”

Oh, but don’t get too excited about that, because once that data breaks down along partisan lines, the findings become depressingly familiar:

Reflecting the general concern people have about this issue, one-in-five U.S. adults respond with a negative feeling, saying made-up news is “wrong,” “unethical” or “bad for democracy.” About the same share (18%) mention the news media, either generally as a source of made-up news (10%), or by calling out a specific news outlet (8%), with 4% naming Fox News, 3% CNN, and no more than 1% naming any other specific outlet.

Fine. We’d welcome any ideas on how to do that.

As Maza’s story highlights, “made-up news” is plentiful on Facebook. That includes bullies, harassers, trolls sponsored by foreign interests and other harmful conspiracy and propaganda peddlers claiming to be commentators or reporters, claiming they know the truth and traffic in “real” news.

Reams of reporting about social media’s proliferation of actual false information masquerading as fact and news have been published. Even so, many 2020 Democratic presidential candidates have been smeared by falsehoods shared across Facebook, Twitter and other social media platforms.

We’ve entered the era of deepfakes, videos doctored via readily available tech, to make the featured subjects look and sound like they're saying thing they didn’t actually say. But a malefactor doesn’t even need anything that sophisticated to do real damage. Trump shared a doctored video of House speaker Nancy Pelosi, edited to make her look drunk, which netted millions of views on Facebook before the tech company demoted it, but did not delete it.

When government officials, including the president of the United States, make the rounds circulating statistics with no official sources or data to back it up, responsible journalists attempt to correct it in real time.

But when, for example, on Thursday Trump sat for an interview with Laura Ingraham and declared that migrants entering the United States from our Southern border are responsible for “bringing in $500 billion worth of drugs, killing 100,000 people and “ruin[ing] a million families a year,” “The Ingraham Angle” viewers simply take his word for it and ostensibly, in the moment he says it, so does its host.  That $500 billion claim, and this is being charitable, may loosely refer to the White House Council of Economic Advisers' estimate that the economic cost of the opioid crisis as was $504.0 billion in 2015.

That figure includes prescription abusers addicted to the likes of OxyContin and Vicodin as well as those addicted to other illicit opioids and heroin. According to The Centers for Disease Control and Prevention, prescription drugs were involved in more than 35 percent of all opioid overdose deaths in 2017. Those drugs aren't coming over the border. They're coming from pharmaceutical companies.

Regardless, reporters who counter this statement with that data are more often than not accused of demonstrating their bias against Trump and even dismissed.

Welcome to the impossibility of being a fact and truth broker in the misinformation age. Welcome to journalism in 2019. U (Trump, politicians, Facebook, Twitter, YouTube, Russian trolls) Break, We Fix.

(Also, what determinant is being used to feed the assertion of ruining a family? I have natural-born American relatives who are family ruiners, but to my knowledge there’s no census question for that.)

On some level, the Pew poll’s findings aren’t particularly surprising. A year ago, Pew released data that indicated that 70% of its surveyed respondents indicated either “a lot of trust” (21%) or “some trust” (49%) in news media, compared to 29% who responded with “not too much/none at all,” which is still depressingly high, but hey — let’s celebrate that majority.

Prior to the 2016 presidential election came the Gallup poll results indicating that overall trust in the mass media had plummeted to an all-time low of 32% saying they have either “a great deal or fair amount of trust in the media.” But again, this temperature was taken smack in the middle of an insane election cycle overwhelmingly focused on the candidacy of a reality show contestant.

That indicator rose to 45 % in 2018 — 45% of Americans who, according to Gallup, “have a great deal or fair amount of trust in the mass media to report the news ‘fully, accurately and fairly,’" which is still not a majority but is still better than 32%.

And it is fair to expect journalists to correct misinformation, even when legitimate sources unintentionally supply it. Journalists are bound to serve the public, speak the truth and think critically.

But to get a sense of what happens when some of us do, look at what’s happening to Lemon and Maza. Lemon has corrected a lot of circulated “made-up news” and is one of the few anchors to call out racism and racists for what they are, particularly when he sees public officials engaging in it. This includes Trump. As a reward for this, he has a target on his back. So, for that matter, does White House correspondent April Ryan, who reportedly pays for her own bodyguard.

Look at the fact that on MSNBC, “The Rachel Maddow Show” posted its lowest-rated month since Donald Trump took office, finishing May 2019 in third place overall behind Fox News’ “Hannity” and “Tucker Carlson Tonight.” This is not to imply that Maddow is an unbiased or even devoid of conspiracy-tinged foolery, but she does at the very least use facts and data as the starting point to her diatribes.

Even though she was ultimately correct about the omissions and unanswered questions in Attorney General William Barr’s summary of Robert Mueller’s investigation, in the immediate aftermath of its release the media turned on her. She told us the Mueller report would, you know, fix the big problem, and in the weeks since it has become clear that it contains measures to do so. But her ratings still haven’t recovered to their previous peaks.

Whereas Sean Hannity and Carlson seize upon any crackpot angle that denigrates Barack Obama, Hilary Clinton, Nancy Pelosi, African Americans who aren’t Ben Carson or Clarence Thomas, immigrants, anyone who is pro-gun control, advocates of LGBTQ rights, feminists … the list goes on for miles.

Maza became one of Carlson’s targets last week, with the host informing any viewers who are unfamiliar with him that he has “a long history of leveling racist attacks online. He has called for physically assaulting people whose politics he disagrees with, even as he whines about being oppressed himself. He is a classic archetype on the left: a fascist, posing as a victim. No sensible adult would take him, or anyone like him, seriously.”

A predictable stance, considering that Crowder once worked as a contributor and appeared on “Hannity.” But Fox News let him go in 2013, according to a senior-level source who spoke with a notable news outlet, because reportedly “the problem was that he was never that funny, and, in addition, he crossed the line more than a few times.”

Carlson’s viewers could fact-check his statements about Maza’s supposed racism and calls for violence — the Pew poll says 78% "say they have checked the facts in news stories themselves," which is good news. But they likely won’t; Fox News viewers consistently rank as the least well-informed among all news consumers in academic studies and polls.

In fact, I’d wager that if there are any Fox news viewers who are also Crowder fans, they might claim that my reporting on the statement as to why he was let go is suspect because that senior-level Fox source is unnamed, which is suspect. But the “notable news outlet” that first reported that scoop is Breitbart. There. Now it’s trustworthy!

In some sense, though, legitimate journalists have more reason to be relieved than frustrated, because so much reporting in recent years has been devoted to calling out “made-up news,” correcting misinformation and, in effect, doing everything within our limited means and abilities to fix the problem. But that also takes time, resources and attention away from the media’s other and equally crucial role of ferreting out corruption, championing the powerless and giving a voice to the growing numbers of people who have legitimate reason to feel they have been robbed of a say or a fair hearing.

The media can only fix the “made-up news” problem if the people who see that as an issue accept the good faith efforts being made to correct those wrongs. And the public should hope that journalists like Lemon and others can move beyond being targeted by partisan invective, that they’ll get the protection they need keep doing their jobs as well as they can. Because if “made-up news” wins at the end of all this, we’ll be in the kind of trouble that has no fix, easy or otherwise.