Trump tells Ingraham that Mueller "made a fool of himself" 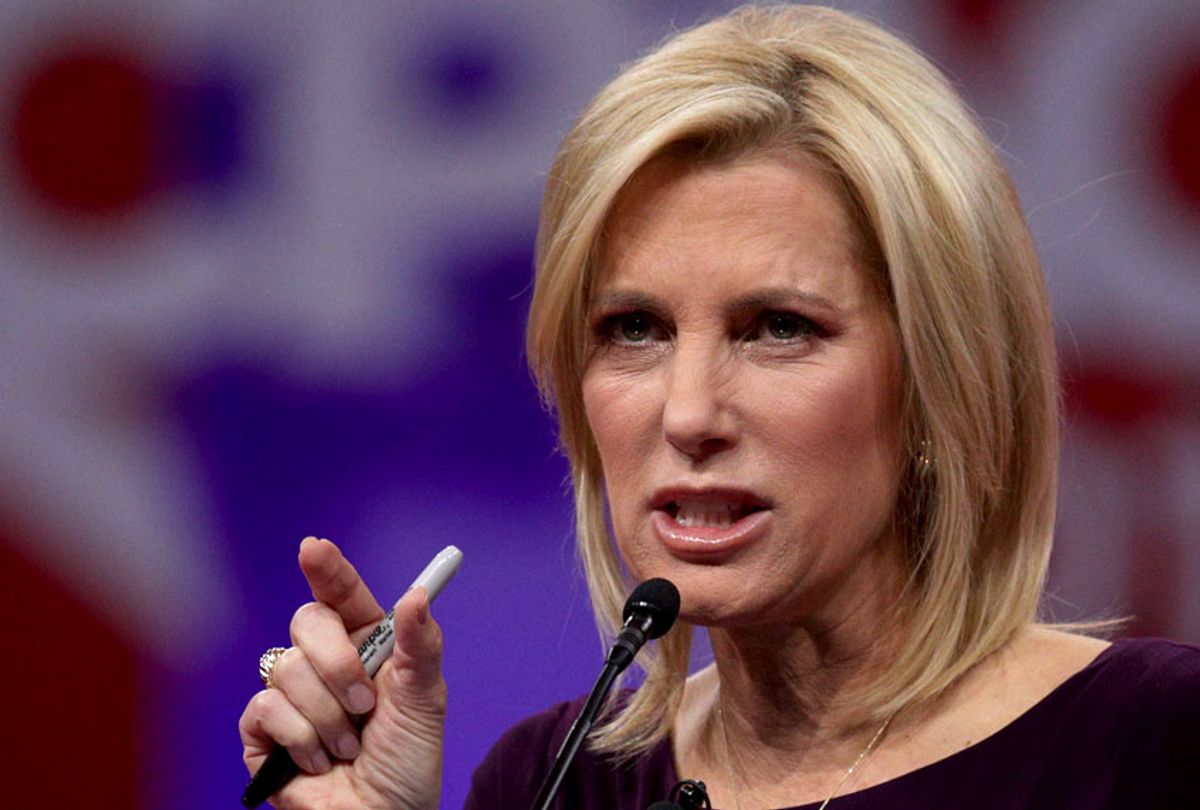 "Trump did a Fox News interview with Laura Ingraham before the war remembrance in Normandy," she wrote on Twitter. "D-Day ceremony began late, but reporters at the event say Trump had finished his Fox gig before France’s Macron, who was apparently running late, had arrived."

President Donald Trump was initially reported to have caused a D-Day remembrance ceremony to start late, because he was being interviewed by the firebrand Fox News host Laura Ingraham.

"Tonight on The @IngrahamAngle, don't miss Laura's exclusive interview with President @realDonaldTrump from Normandy. And I speak with some Army Rangers who recreated scaling the cliffs here, 75 years later," tweeted Raymond Arroyo, a Fox News contributor who appeared with Ingraham during her broadcast.

Many on Twitter pointed out that the president left thousands waiting, veterans included, while he conducted a partisan interview.

"POTUS and FLOTUS have arrived at Normandy American Cemetery - and are sitting down for a Fox News interview with Laura Ingraham before the president's D-Day address," wrote Francesca Chambers of The Daily Mail.

Hallie Jackson, the chief White House correspondent for NBC News, posted a pair of tweets explaining that "French television cameras spotted President Trump sitting down with Fox’s Laura Ingraham - fourteen minutes *after* the ceremony in Normandy was set to begin. Thousands of people waited as an announcement overhead came on, declaring the program would be delayed until 11:15a. As @JonLemire notes: from pool’s vantage point, the president appeared to be done and ready before Macron arrived, at which point ceremony began."

Jennifer Jacobs, White House correspondent for Bloomberg, said that the event ran late because of French President Emmanual Macron. Trump did his Ingraham interview before the war remembrance, she wrote:

The president used his appearance on Fox News to push back against former special counsel Robert Mueller, whom he referred to as a "fool."

"Let me tell you, he made such a fool out of himself . . . because what people don’t report is the letter he had to do to straighten out his testimony, because his testimony was wrong," Trump told Ingraham.

HuffPost slammed Ingraham's decision to joke about Democratic politicians who they allegedly "use kids as props" during her broadcast, which took place against the backdrop of the cemetery at Normandy. An article titled "Laura Ingraham just delivered the most tone-deaf moment in Fox News history" read in part:

More than 9,300 soldiers are buried at the cemetery, which is generally reserved for solemn ceremonies, like on or near the anniversary of the June 6, 1944 D-Day invasion. But on Wednesday, those graves served as a backdrop for Ingraham’s political show as she and Arroyo snarked their way through a segment on recent campaign events in which Democratic candidates took questions from children.

The discussion then moved to other issues, such as whether the phrase “ladies first” is sexist, which led to still more laughter between the two despite the somber location.

“A lot of that politics led right up until the moment the president gave his speech, because not minutes before he walked on that stage, he sat down for an interview with Laura Ingraham, who in the last few weeks on her show has defended an antisemite, Paul Nehlen, who spouts anti-Semitic views and white supremacist views all the time," Berman reportedly said.