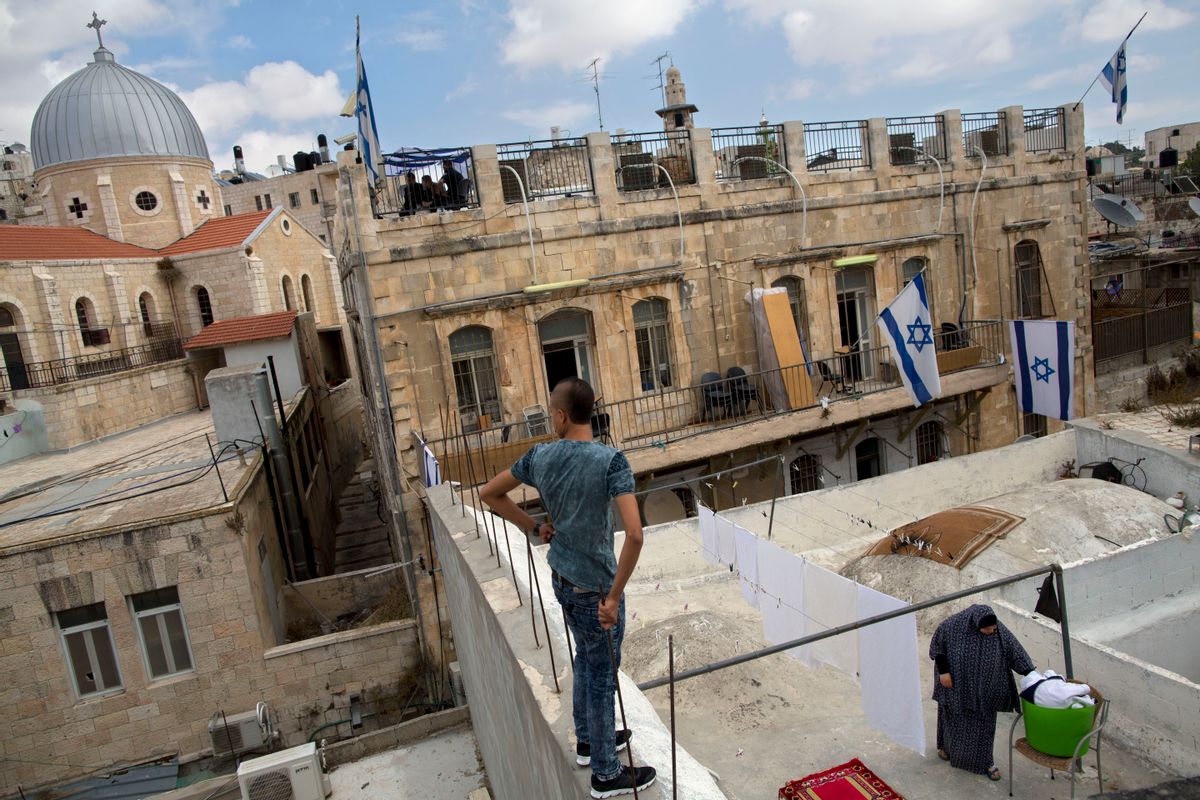 As a part of the Center for Jewish Nonviolence, I joined a coalition of over 100 Palestinians, Israelis, and Jews from the U.S. and Canada to rehabilitate a dirt road in the South Hebron Hills that would give Palestinians in the area greater access to basic resources they need to live. When we started this project in early May, a range of Israeli police and military agencies responded with force, employing methods of crowd dispersal to arrest 17 people and injure dozens of others. As I heard the blasts of sound grenades going off and saw heavily armed police specifically target people of color in our group, the scene felt, in some ways, familiar. Back in the U.S., I had seen police responding to peaceful protests with disproportionate force and racist violence, too.

This road and its surrounding areas in the South Hebron Hills are considered part of Area C, the sections of the West Bank that are under Israeli military rule. Palestinian communities in Area C are deliberately divided from one another by the building of settlements and the declaration of vast areas of land as firing zones for the Israel Defense Forces (IDF). Palestinians in these areas also face extreme levels of displacement and violence, both from the residents of settlements, which are deemed illegal under international law, and the Israeli state that protects and serves these settlers. Palestinians are deprived of the right to move freely on their own land. Their children cannot safely commute to school, and ambulances often cannot get to and from their villages when an elder becomes sick. Practically any attempts to build infrastructure, such as schools, greenhouses, libraries, or homes face the threat of demolition. Under these circumstances, mere existence is resistance to Israel’s occupation.

Within minutes of starting our work project on Friday, Israeli soldiers and police officers stationed themselves at both the end and side of the road. They declared our worksite a closed military zone, making our presence illegal under Israeli military law. Soon, dozens of heavily armed soldiers and police closed in on us. Sound grenades exploded around us, police pushed us to the ground, and soldiers put us in headlocks and chokeholds. As they tried to tear us apart, we linked arms, sang together, and did everything we could to keep each other safe and protected from the violence of this occupation. Nevertheless, the Israeli state perpetrated all of this violence against us — a group of nonviolent Palestinian, Israeli and international Jewish activists — simply because we were attempting to repair a road that would give Palestinians greater access to basic resources that their human rights entitle them to.

Our Palestinian comrades received the worst treatment. Soldiers and police officers immediately targeted them for arrest, ignoring many Jewish activists who were in their way. Then, after the soldiers and officers detained one of the Palestinians in our group, they forced him into stress positions while pushing his head against a car window. It was clear that, for many of us, our Jewish, white and international privilege shielded us from the kinds of brutality Palestinians in our group had to face.

Later in the day, as many of us reflected on the violence we faced, we thought about our experiences witnessing police repression in the United States. We must not conflate or equate unique experiences of oppression, but at the same time, it is important to recognize the parallels between these two states that are grounded in white supremacy, and how they feed each other. Many of us were reminded of anti-Black police brutality in the U.S. when we witnessed two soldiers hold a 16-year-old Palestinian teenager to the ground, with one boot pressed on his neck and one knee pinned on his chest. Many others on the delegation also were reminded of the brutal police response to the protests against the Dakota Access Pipeline at Standing Rock, where thousands of nonviolent Indigenous activists and allies were met with forceful military-style tactics by a variety of U.S. security agencies. The ways in which Israel discriminates and uses state violence against Palestinians is not unlike many of the ways in which the U.S. treats people of color.

These parallels between policing in the U.S. and the security state in Israel illuminate the fact that Israel is not an exception to the rule, but rather a prime example of how states rooted in racism treat their non-white populations across the globe. As one of our Palestinian partners said earlier this week, “the Occupation is just one of the many injustices of this world.” In order to end injustice in Israel and Palestine, we must also resist other injustices wherever and whenever they appear. This global system of racist violence and oppression is upheld in large part due to the strong connections states hold with one another, promoting policies and politicians who strengthen the status quo that privileges one group over another.

Among this large web of interconnected systems of state violence sits a series of exchange programs and trainings between police leaders in the United States and Israeli security agencies, largely funded and planned by third-party organizations such as the Anti-Defamation League (ADL) and the Jewish Institute for National Security of America (JINSA). According to a recent report on the exchanges released by Researching the American-Israeli Alliance, hundreds of U.S. police departments have sent officers to train in Israel and thousands of individual U.S. law enforcement officials have participated in these exchanges. The extent of these programs is both far-reaching and deeply impactful for participants. Chief Peter Newsham of Washington, D.C.’s Metropolitan Police Department recently stated that his trip to Israel “was the best training that I have had in my 28 years as a police officer.”

These programs, like the Anti-Defamation League’s National Counter-Terrorism Seminar, facilitate a deadly exchange of worst practices — such as racial profiling, increased surveillance, and repression of nonviolent protest — which are used by both Israel and the U.S. to subjugate their non-white populations. After Baltimore and Montgomery County police officers attended an ADL-sponsored trip to Israel, the Baltimore Sun reported that participants learned that “unlike in the United States, where racial and ethnic profiling is forbidden, Israeli airport officials explained how they use profiling to identify suspicious passengers, questioning them extensively and performing searches if necessary.” In addition to reinforcing the violent, discriminatory and dehumanizing character of policing in both states, these exchanges also serve to build relationships between U.S. police departments and private corporations that sell everything from new surveillance technologies to the latest crowd control weapons.

However, concerned residents of many cities across the U.S. are now voicing their opposition to the participation of their local police departments in these exchange programs, and they’re winning. In April 2018, after facing pressure from a local coalition called Demilitarize from Durham2Palestine, the city council in Durham, North Carolina, passed a resolution banning police from participating in military-style trainings of all kinds, including with Israeli security agencies.

A few months later, after residents across New England participated in letter-writing campaigns and public meetings with their local government representatives, police departments in Northampton, Massachusetts, and the state of Vermont pulled out of an all-expenses-paid trip to Israel that was being organized by the ADL. Activists in cities like Washington, D.C., Seattle, and Pittsburgh are all demanding their local police departments stop participating in these exchanges. In order to create real safety for communities across the U.S. and to ensure that Palestinians are treated with dignity and equality in Israel/Palestine, we must follow their lead and demand an end to these programs. Beyond that, we must seriously question whether the violent, white supremacist institution of policing can truly provide safety to anyone, from Palestinians living in the South Hebron Hills and beyond to people of color in the U.S.