Cheers to Maya Erskine, flawless life of the "Plus One" party 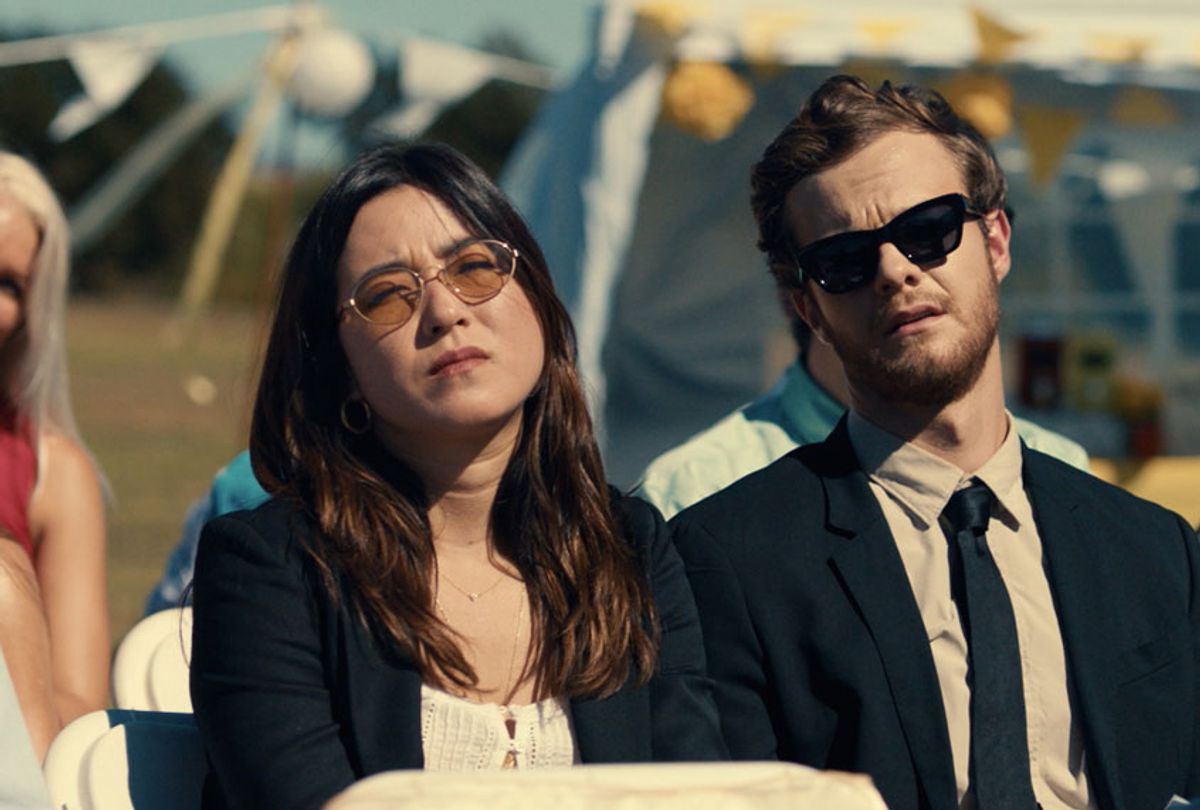 Let’s all toast Maya Erskine, who gives a knockout comic performance in “Plus One,” writer/director Jeff Chan and Andrew Rhymer’s charming and funny wedding-themed romantic comedy. Erskine’s Alice is an unfiltered twenty-something who puts up a tough exterior that’s all defense; she is licking her wounds after a breakup. She is infectious when she’s drunk and dancing alone at a reception or when marveling at the softness of a child’s arm. She is smart — and smart-alecky — doling out sage advice on what (not) to say in a Best Man speech. And while Alice is amusing when mocking other people’s wedding photos, she is not against being mischievous while posing for one.

Erskine is a terrific physical comedian. She gives a nice payoff to a sight gag involving Alice falling sleep against a car window. She delivers wicked one-liners with deadpan aplomb and does witty impressions. Alice may have her flaws — she thinks it is freeing to pee in the shower — but Erskine is flawless. She can rock a leather jacket and a bridesmaid dress. The actress is so damn irresistible viewers may want to marry her.

“Plus One” is quite enticing, too. The film is like the civil union of “When Harry Met Sally” and “Four Weddings and a Funeral” (minus the funeral). It presents the friendship between Ben (Jack Quaid) and Alice, besties who make a plan to couple up to attend 10 weddings together over the course of one summer.

The connection between Ben and Alice originated in college when he had designs on her roommate. Although that relationship only lasted a few weeks — as all of Ben’s romances do — he and Alice remained friends. Ben is much better in the friendzone: He has a fear of commitment that stems from his parent’s divorce, which still smarts. When his dad (Ed Begley, Jr.) announces that he is engaged to his much younger girlfriend, Gina (Perrey Reeves) and asks Ben to be his best man, Ben hesitates. This is the film’s hoariest plot device, but it does serve a purpose in getting Ben to grow up.

Ben is feeling anxious because can’t seem to find “the one.” In typical rom-com style, Ben says he knows what he wants, but he is too picky, and gets in his own way trying to find it. Meanwhile, viewers will root for Alice to find love and happiness because she brings fun to the party — smoking weed with Ben’s father’s friends at one set of nuptials, or bonding instantly with Brett (Brandon Kyle Goodman) and Nick (Max Jenkins), Ben’s gay friends, at a destination wedding in Hawaii.

Chan and Rhymer mine the salt and vinegar relationship that Ben and Alice have for all its savory-sourness. Erskine and Quaid enjoy a decent chemistry — she’s all attitude and the life of the party, while his sulkiness somehow makes him attractive. Their rapport is amusing, but never precious in a cringe-inducing way. “Plus One” is a high-concept indie rom-com, complete with an outcome for Ben and Alice's relationship that fits the genre, but it's enjoyable because it embraces those conventions like a comfortable old shirt.

An early scene has Ben and Alice sharing a bed. She wants to cuddle (she’s recovering from heartbreak). Ben declines, claiming it’s a lose-lose situation for him: if he gets aroused, she’ll think he’s into her, but if he doesn’t, she’ll feel unattractive. That Ben is unable to read the real situation is part of his problem. It is not that Alice is looking for a rebound relationship at that moment, she’s just wise enough to know Ben can give her the comfort she needs and that their relationship has the capacity for longevity. Besides, they both care about each another—and everyone thinks they are together anyway. (The film’s biggest plot hole may be why Ben is unable to see Alice as his perfect match—everyone else does.)

But the will-they-or-won’t-they-end-up-together plot is not the point. Chan and Rhymer are focused on making keen observations about love, relationships, and marriage while also providing laughs, poignant moments, and ceremonies. (The film uses the device of awkward toasts to introduce each wedding).

While there are some fun moments of Alice playing wingman for Ben — “microwaving a hot meet cute” as she puts it — there is also a terrific, albeit painful, scene where the lonely Ben shares a moment with Cartelli (Jon Bass), another desperately lonely guy at a wedding. Cartelli wants to hang out with Ben in the hopes of getting laid again. Ben winces at the prospect. Bass deserves a shout out for being so pitch-perfectly pathetic. His entire character is conveyed through a single held expression of vulnerable optimism. Details like this that make “Plus One” so superb.

The weddings are not the point of the film. It’s a relationship movie. When Alice is at her family’s home — her sister is getting married — her bossy mother (Rosalind Chao) shows how Alice has not fallen far from the tree. Alice has a good, if disheartening, bead on her parents’ marriage, and it is enough to make her wary of the institution. But the brief mother/daughter exchanges are telling, and like the Cartelli scene, provide just enough heart to make viewers feel and think as well as laugh.

“Plus One” sags whenever Alice is not on screen and Ben’s story takes over the narrative. Quaid is affable in his role, but he doesn’t bring the kicky verve that Erskine does. His cluelessness is not as appealing as her moxie. Erskine injects the film with magic and keeps this buoyant comedy afloat. Raise a glass and cheer.